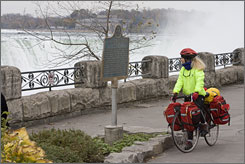 In the 19th century, thousands of people who sought release from slavery followed the North Star to freedom. Now, bicyclists can follow a series of maps that approximate the historic 2,100-mile Underground Railroad from the Deep South into Canada.

The just-completed Underground Railroad bicycle route is chronicled in five maps of about 400 miles each starting in Mobile, Ala., and ending in Owen Sound, Ontario. The course meanders along back roads and through wildlife refuges and small towns. It highlights sites, from a former slave market in Mobile to Owen Sound, a town founded by freedom seekers and known as the final terminal of the figurative railroad. Also included are detailed lists of services, including lodgings and libraries, many of which will serve as "stations" on this 21st-century version of the route. Participating libraries will offer resources such as Internet access, plus displays related to the route.

The project was conceived by the Adventure Cycling Association, a non-profit group. Coming off the success of a Lewis and Clark heritage bike trail it created for the explorers' bicentennial, Adventure Cycling polled its 43,000 members for ideas on where to create a new one. The Underground Railroad route got the nod.

"You're not only getting an adventurous outdoor travel experience but the historical context as well," group spokesman Aaron Teasdale says.

That the predominantly white sport of bicycle touring is spotlighting black history isn't lost on Steven Thomas, director of the Center for Minority Health at the University of Pittsburgh. The center, which works to eliminate racial and ethnic health disparities, is using the Underground Railroad route as a vehicle to draw more black Americans to cycling. After three years in development, Thomas calls it "one of the most interesting partnerships to advance minority health and lift up black history."
Click to expand... 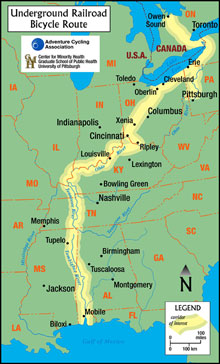 The canada section of this ride looks like it uses some of the bruce trail that runs from niagara falls area to owen sound I have ridden on it many times with my old mountain bike and it is a beautiful, well maintained trail
just watch for low tree branches around blind corners haha I saw someone crack a helmet in two that way
L

i'll ride the niagara area in ontario with ya
T

I'd love to ride that trail.
W

why how bad are some of those parts that you have to carry your bike , is it just flooded out or the terrian just tha bad.
W

terrain is too steep to ride up

Jan 23, 2019
triple threat
T
B
Are you legally required to have a drivers license and registration for your car?