OK, I have a new engineering project. My friend is motorizing his bike and he wants to have multiple gears. I have decided to try to make it into a 3-speed. We are starting with a diamond-frame 16 speed bike; 2 rings up front and 8 in the back.

It starts with standard installation of a grubee-type motor. Then I install an axle on the frame that moves the motor power to the right side. The motor power on the right side will now be using a bicycle chain. Basically, I will build a small axle with a standard motor sprocket on the left and a bicycle sprocket on the right, then attach it to the frame very close to the motor.

I then choose 3 speeds for the outermost rings of the hub and leave the four in between those 3 and the innermost ring empty. The outermost 3 rings will be the 3 speeds used by the motor, using the stock derailleur to change gears. This creates a space between the motor chain and the pedal chain. The derailleur will be readjusted to limit movement to the outer 3 rings only.

That should do it. It's really just an easy, standard installation on a diamond-frame bike, until you get to the part where I move the motor power to the right side. The main project here will be fabrication of the axle to move the power to the other side.

Has this been done yet? Has anybody seen any photos that might help, or am I on my own here?

The idea of gears would be really sick. Its hard for me to visualize what your idea is. Maybe a drawing would help. I want to see someone pull this off!
M

that sounds cool, but how are you going to make axle and extra sprockets?
i think it need to be totally customized .
P

Try a shimano 3 speed hub, oldie but goodie
B

Here is a rough sketch of the idea I have, as described above.

Note that contrary to the rough draft, the conversion axle I build will probably have a bigger sprocket on the motor chain side, and a smaller sprocket on the bicycle chain side. This will allow for using a small bicycle sprocket instead of the large stock motor sprocket.

The next step will be keeping the pedals from being pushed by the motor. 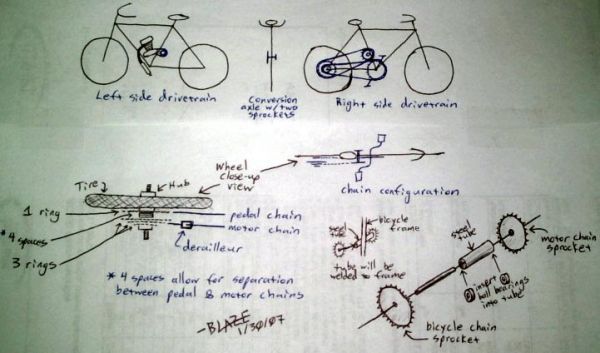 I will need to put another freewheeling sprocket somewhere. I think this is what Bird was talking about.

Bird, do you have any pictures or drawings of the 3-speed hub idea? I'm still going to be using the original gears at the back wheel, but I will need some sort of freewheeling sprocket up front to keep the motor from turning the pedals.

If I can get one of these freewheels mounted on the back wheel (it would be kind of a redundant freewheel sprocket mounted over the freewheel hub) that would work pretty well. That would eliminate the need to try to get the crank to freewheel. It would be great because then the pedal chain wouldn't even move at all when the motor is powering the bike. 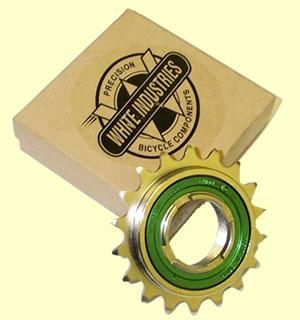 How are you going to compression start the motor if the drive chain is connected to a freewheel? When the rear wheel is rolling without being driven by the chain, the chain and drive sprockets won't move unless the freewheel is defeated. You could use a fixed gear block on the rear hub, a freewheel on the jackshaft which would connect to the pedal chainring via a short chain. There would be the friction of all the chains and sprockets turning when the engine clutch was disengaged while under leg power, but you could bump start the engine and you wouldn't have to have the pedals moving when the engine was driving the bike. I did a post recently about my thoughts on using a threespeed hub as a jackshaft/transmission. heres that post in quotes:

"I have been thinking about using a two or three speed hub as a transmission. My idea is to use it as a gearbox mounted directly behind the motor. I will machine a flange and braze it to the hub shell on the left side of the hub. Add a removeable sprocket to the flange. My fabricated mounting brackets, similar to rear droupouts will be added to my frame to hold the hub. The hub will act as a multi-speed jackshaft. The primary chain is from the engine to the left hub sprocket. The secondary chain is from the pre-existing hub sprocket, on the right side of the hub, to the factory cog on the rear hub. This gets rid of the leftside add on hub sprocket. Because of the ratchet in the three speed hubs, you can't just flip the hub and use the existing gear on the left side. The freewheeling aspect of the hub also means no bump starting the engine as most of the chinese engines require. There were some fixed gear threespeed hubs made at one time, but they are rare and in the world of ebay, now very expensive. There are ways to defeat the freewheeling of regular hubs, but this requires modifing the hub internally."
B

No pop starting this bike. It will have a rope pull-start to get it started.

I thought about using a multi-speed hub for the transmission, but I remembered reading somewhere that the torque from the motor would turn it to shrapnel. I know you could probably just let off the gas to shift, but if I'm going to build it, I'm going to build it idiot-proof. That means being capable of shifting under at least some power. The 3-speed hub idea is a great idea, though. Definitely let me know if you build it.

When you add the rope-start thing, you might want to watch out for pedal clearance as the starting unit will make the engine wider which will compromise the ability of using the pedals. But I guess if the motor has a 3-speed tranny, you might not have to use the pedals...