4 stroke has issues starting, and dies after choke is turned off

Alright, i've been looking around various threads for the last few days, but still can't find a fix.

I bought a motorized bike last summer from a pawn shop. It worked when I first got it, but had some small issues. I'm young and have never worked on an engine in my life. I didn't realise that the issues were kinda ruining the motor. I just tightened all the bolts and screws and called it fine. Then my bike just wouldn't start so I left it for the winter since I didn't have the time or tools to work on it.

My bike was sitting for a couple months and still wouldn't start. I didn't know what to do and just followed some advice from trusted people to just replace the carb. I bought a new carb and throttle assembly and installed it. After I installed the carb it would start but the belt transmission was smoking, but I just took the cover off and it is fine. Now the bike starts on a closed choke and a little throttle, but tries to run away even after I close the throttle. If I let go of the throttle harshly the engine dies. If I open the choke it dies.

I've seen threads with similar issues, but none with all of mine, and none of the fixes work.
No one I know has any experience with small motors so i'm totally at a loss here.
Last edited: Apr 2, 2020

I should also mention that it takes 5-10 tries before my motor starts. And when I bought my carb I also got new gaskets.

Any pics of the motor? Let's assume it's a HS142f 49cc. When dialed in those motors should start max 3 pulls when cold, 1 when hot and purr like a kitten idling. The replacement carb does it have an air mixture screw to adjust or none?
" Now the bike starts on a closed choke and a little throttle, but tries to run away even after I close the throttle. If I let go of the throttle harshly the engine dies. If I open the choke it dies."
Dying when letting go of the throttle could be the idle adjustment screw is set too low. If it only runs when the choke is closed it's being starved of fuel. Gas cap not venting, try running with it off. Carb jets clogged with debris or float needle valve not functioning correctly. Air mixture screw way out of adjustment, need to adjust.

I don't have any pics at the moment, i'll take some as soon as it stops raining in my area, so I can also work on my bike. And yes, that is the model of motor.
I don't know what the air adjustment screw is, that was the issue on some other threads, but I don't know where that is, and can't find an image pointing it out. I did find where the idle screw is trying to look for the other one, and I did adjust the idle but put it back to the original position after it still had issues.
When it stops raining i'll get back with pictures and try everything after I figure out what everything is.
T

Sounds like you need to clean the carb and then adjust it. Look up the procedure for adjusting the carb on here, basically you get up to temperature with choke on, then turn screw all the way clockwise. Then turn it 1/8 turn at a time counter clockwise each time you start the engine until you find the spot where it stays idling (keep track of how many 1/8th turns), then keep going till you find you’ve gone too far and it wont idle anymore. Your perfect adjustment should be within those two points and it should be readjusted everytime the temperature outside changes more than 10 degrees to avoid lean/rich conditions.
C

I got a good picture, is that little flat head bronze looking screw something I need to adjust? I also tried running with the gas cap off, it started on the third try, and first time when it was warm. I also tried adjusting the idle, but it would run away from me every time I started it no matter how loose the idle screw was. That seems to be the main issue right now. Since it started well with the gas cap off, should I buy a new one? 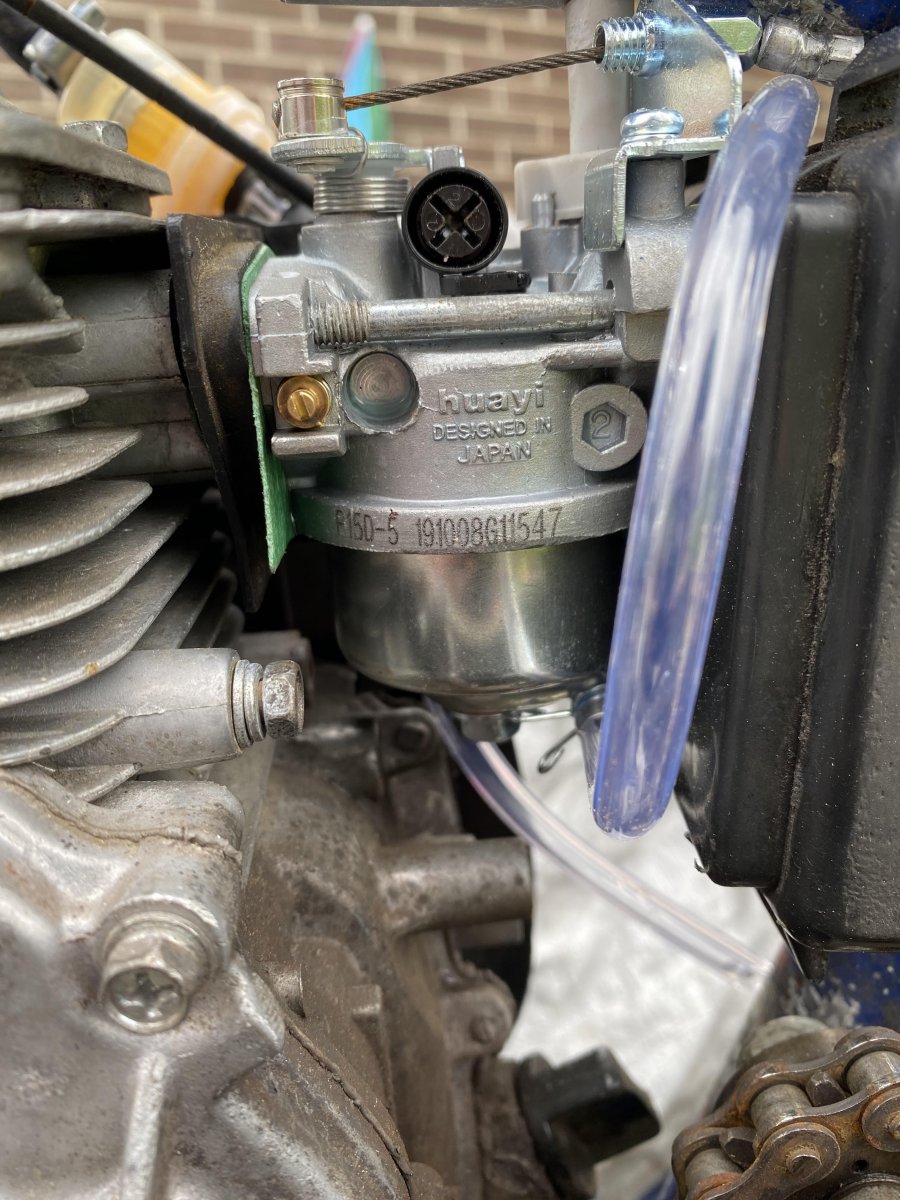 The black plastic screw top center of your picture is the idle screw. The little brass one is the air mixture, but Wait for Darwin to show up to be sure on that tho.

Chainlube said:
The black plastic screw top center of your picture is the idle screw. The little brass one is the air mixture, but Wait for Darwin to show up to be sure on that tho.
Click to expand...

i have the same carb, the brass one is the air mix, the black one is the idle adjust.
id turn the brass one about 1/4 turn in and see if that fixes it the running away issue.
turning the screw out = richer
turning it in = leaner
go in 1/2 increments and let the bike react to it (ie give it about 30 seconds and see if it changed)

also you have to give the bike a touch of throttle for it to start up first pull.

Above posts are correct, it's no secret. Anyone who's owned a HS 49cc for any amount of time will deal with above issues. I blame it on the ethanol in the fuel. If we had pure gas that carb would hardly ever have any issues, simple and effective design.
C

Ok. I spent about an hour today trying almost every combination. Turn the air mixture a little, then try to adjust idle. It got to the point where the air mixture screw was all the way in, but my motor wouldn't idle. I got my motor down to very low RPMs where it sounded like it was struggling to run. Do you think the issue would have something to do with my clutch instead of my carb? I don't really know, just throwing an idea out since nothing else will really work.
Share:
Facebook Twitter Reddit Pinterest Tumblr WhatsApp Email Share Link
Top