4 stroke hasn't started in over a year

Ok, since my previous threads are so old, will start all over.
I have a Huasheng 4 stroke (improvement over my old 2 stroke) that has given me fits since I got the thing.
I'll post a list of all I did so far below,
short question first.... I THINK I narrowed down the issue to a bad kill switch. Actually I have two of them.
One on the hand grip gave out a year before the thing quit starting, and I've been using the little red button on the side of the motor.
The last time this bike ran, (summer before last) it was running like crap. Nowhere near the power it once had, hard to start... then on Memorial day, first time I started the bike that year, it was a royal pain just to get started. Ran real rough, very short trip, basically just rode a few blocks around my house, and even harder to restart later.... then tried for a late night ride and it simply would NOT start at all.
A friend helped me sort this out using a spark plug tester, and told me that yes, if the kill switch is going bad, it could have been causing all the crappy engine running issues until it just flat out fried. After we disconnected it and tried, at least now the motor sounds like it's trying to fire... (next thing to do is replace the two year old gas and try again.)
So... snooping around online... where the blazes does one find a new kill switch? Also could my having two of them, one on the motor and one on the hand grip have been a problem? I would rather lose the one on the motor and keep the one easier to grab if I have a choice. Or does that even matter.
So any advice on this would be appreciated....


Now for all those interested, the history of my nightmare with this motor.

First, the guy I bought it from sold me his own hand made clutch cover.... which was a hugely bad idea. Piece of cheap tin that awkwardly attached over the clutch, and did NOT seal it.... so every manner of grit and oily crud got right into the clutch, not even one year into this I had to buy a new, closed clutch box, also put in a heavy duty clutch, all of which needed a new chain, different gear ratio. Big pain.

Good for one season, the next started with the hard to start and running kinda rough issues.
First order of business was cleaning the carb. Did that twice, nothing. Replaced it. Also put in a better spark plug... nope.
Someone said adjust the valves, learned about that, bought the gauge, got er done. Got it running BUT....
I must have just got lucky, did not know about finding top dead center. But that got me a season.
Next year was the last time it ran at all. And this time I did not get lucky, read up on finding top dead center, and I STILL can't quite get that one.
Stick a straw into the spark plug hole, turn the engine over and the straw goes up down up down... great. It's a FOUR stroke. Up down up down. WHICH UP IS THE RIGHT UP???? That one I don't know.
Had a mechanic friend look, and HE set it to just the right spot.... (without actually showing me how he knew, and he vanished after this.) I did my adjustments, and still... nothing. Got frustrated and the bike sat ever since. (built another one instead.)

So now... another friend is the one who tried testing for spark and figured out it might just be this kill switch, the test light did light but just barely, then we removed the kill switch and it did light. Hence, it just might be that simple. Faulty kill switch. (again, still not starting but I have yet to flush out the old fuel. I will need some kind of kill switch, may as well get that first.)
And that's where I stand to date.

OH... Also... my exhaust pipe had to be bent to fit my frame, had a friend with a good vice and torch help bend it. That had to be done right away when I first got this motor and it's has run with it, but there is a point in the pipe that got just a bit crimped. I'm guessing here, but at one point the inside of the pipe may be 3/4 the diameter of the rest. I'm wondering if that might have clogged? Or even if just being slightly crimped if it may have over heated the motor and ruined it, and if so is there any way to open the motor up and see? What do you look for in an over heated motor? And if I have to replace the exhaust I think what I'll do is take the old one, and a new one to an exhaust shop and have THEM bend it. Just say match this shape but without the kink. Hope I can find a place that will work on such a skinny pipe. Shops might only have equipment to do car exhausts.

Anyway... kill switches, preferably hand grip only, where to find one.
thanks. 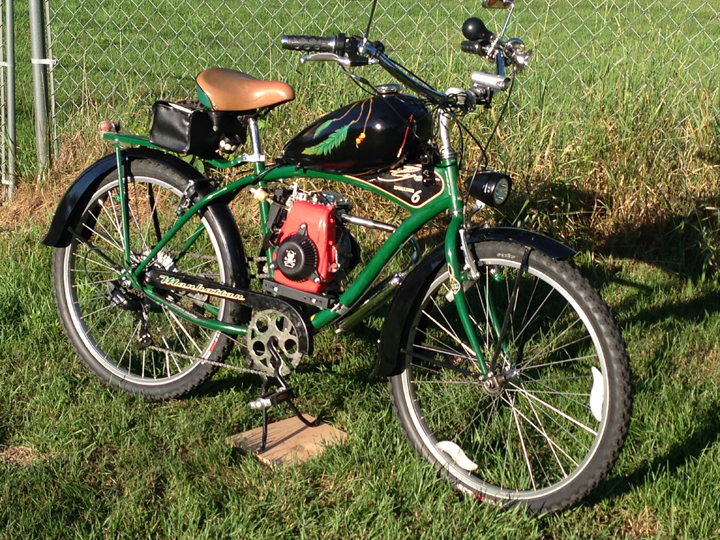 Sort by date Sort by votes

DistantWolrld101 said:
@artmaker i see your from SW Michigan where at, if your close enough maybe i can help ya or i may know someone who can, i know a few people in dif parts of Mi.
Click to expand...

Cool, look up Hartford MI. Right off I 94. I'm six miles from that exit. I'm sure there is a way we can privately message, don't want to post my address for the world ya know.
Upvote 0 Downvote

artmaker said:
Cool, look up Hartford MI. Right off I 94. I'm six miles from that exit. I'm sure there is a way we can privately message, don't want to post my address for the world ya know.
Click to expand...

You can PM others on here too. Conversations are private.
Upvote 0 Downvote

Well my two stroke is down now, but pretty sure that's a magneto, got a few (back up is always good) on order.

So back to this º•¶∞§∞!!! 4 stroke. I had purchased a tool to help find top dead center awhile ago, too long now to return it but the stupid thing doesn't fit. My spark plug hole is much narrower than that thing.

SO back to youtube, took the cover off where the pull cord goes, manually moved it up and down, one video said when both lifters have wiggle room that's it, another talked about resistance being the compression stroke. I TRIED to take the oh, what is that called under the cover with the fins on it off but there is now way and I think I ruined my impact drill trying. Wont budge with wrenches or anything so that's out. I would have liked to actually SEE what's going on inside but I can NOT remove that thing. Back to the straw in the hole and manually turning the motor until I THINK I'm at top dead. Did my adjustments (and yea they were WAY off.) Put it all back.
Changed the gas and gave it a try. OH I also tested the spark plug with a multimeter, it's fine. Removed both kill switch wires too.

NOTHING! It doesn't even pop, NOTHING. Nothing at all. So at this point I am ready to take the thing off and chuck it in the scrap heap. Just flippin start over.


So.... guys.... who can recommend a GOOD 4 stroke motor. (That being said they are all made in china crap, but the best of the crap suggestions please.) I'm kinda leaning towards one called the flying horse.... is that a good one?

OR does anyone else have any suggestions what to try next?
Upvote 0 Downvote

artmaker said:
OR does anyone else have any suggestions what to try next?
Click to expand...

This is how I set the Valve Lash, I don't use a PTDC tool. But you can stick a straw down the S/P hole if if ya want to reassure yourself the piston is @ TDC
Last edited: Jun 27, 2021
Upvote 0 Downvote

DistantWolrld101 said:
the 4-stroke flying horse is the same engine just with a sticker and fancy name also i haven't forgotten about you just hard to make it out there when my gy6 won't stop flooding it self @artmaker
Click to expand...

Check over your float needle and seat.
Upvote 0 Downvote

Chainlube said:
Check over your float needle and seat.
Click to expand...

already did, adjusted it as much as i can to the point it barley lets gas through it still floods like its not getting air,

i have to manually blow air through the vac line on the intake manifold to start it. then on and off blow air to keep it running other wise itll flood out.

DistantWolrld101 said:
already did, adjusted it as much as i can to the point it barley lets gas through it still floods like its not getting air,

i have to manually blow air through the vac line on the intake manifold to start it. then on and off blow air to keep it running other wise itll flood out.

if i hit the start button after 2 cranks without blowing air the plug will be wetter then a nerds boxers seeing knockers for the first time
Click to expand...

Orginal Gy6 carb and intake manifold if that what your asking.

no fuel pump, gravity feed with no filter which may be the issue may be too fast haven't thought about that till now

DistantWolrld101 said:
Orginal Gy6 carb and intake manifold if that what your asking.

no fuel pump, gravity feed with no filter which may be the issue may be too fast haven't thought about that till now

Is the clip on the needle on the top notch?
Upvote 0 Downvote