So I've done several bike kits, both 2 stroke and 4 stroke, and generally have no issues getting them to run. However, I just finished my most recent build, had it running twice, but now face a new issue I haven't dealt with yet. The stock NT carburetor was the initial problem as it was getting too much fuel flow, causing it to leak fuel out the air filter. I checked my throttle assembly and everything was sitting correctly and moving freely when twisting the throttle.

So to fix the issue of the fuel leak, I ordered an upgraded carb from Amazon, made by MaySpare, but after it took fuel once and rode smoothly for two miles, it no longer wanted to draw fuel. I opened the carb up, no cracks in the float, no dirt inside it, but can't get fuel to flow. Bowl doesn't even fully empty out, but yet I can't get the engine to fire. It'll crank, attempt to fire over, but bogs down and dies. I'm at a complete loss cause this isn't something I've had an issue with before. Any ideas? I checked similar posts, but those with the same issue never reported back as to if it ever got fixed.

sh4d0wm4n42 said:
It'll crank, attempt to fire over, but bogs down and dies.
Click to expand...

I am going to assume that your hopefully using the choke and running it with the choke in the ON postition, (lever in the upward postition), and then shutting off the choke altogether, (down postion), choke will only be effective for first 30 seconds to one minute depending on the ambient teperatures.
S

I do yes. Although the MaySpare lever is backwards. You put it in the down position to turn the choke on, and automatically pops up after getting a full twist of the throttle. But even then it's still staying bogged down. The MaySpare's design is a little new to me.
S

sh4d0wm4n42 said:
The MaySpare's design is a little new to me.
Click to expand...

I use the JRL BoFeng myself, It is a much improved variation of the NT carby, It actually has the emulsion tube for dispersing gas/oil mix more evenly and efficiently which is not in the NT carby's.


sh4d0wm4n42 said:
My stock nt carb however is acting like the float isn't stopping drawing fuel at all so it overflows through the air filter through a small hole
Click to expand...

The NTs are well known for having pin hole leaks in the float that slowly fill up with gas, holding the float down causing the gas to leak out.
S

That's the upgraded carb I got... Its design isn't one I've used before but worked flawlessly for two miles.

As for the JRL, that's almost the exact design of the stock carb that I got with the kit. I just can't get it to stop overflowing
S

I stand corrected... It is the same one. I never even noticed the BoFeng etched into the side. Not an nt.

sh4d0wm4n42 said:
I stand corrected... It is the same one. I never even noticed the BoFeng etched into the side. Not an nt.
Click to expand...

What is your altitude above sea level as well as which groove on the needle valve is the C clip located on the needle??? 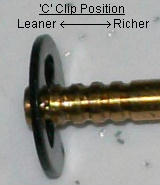 sh4d0wm4n42 said:
the MaySpare lever is backwards. You put it in the down position to turn the choke on, and automatically pops up after getting a full twist of the throttle.
Click to expand...

You need to take some pics of that carby and post them here for me to see...my BoFeng carb has the choke working the opposite of what you just described.

These carby's do not have automatic choke "pop up" control so I suspect the screw holding that inside airflow restrictor must be loose .

To fix that, hold the lever all the way downand and make sure that restrictor arm is completely clear from obstructing airflow, then proceed to tighten the hold down screw, then test it up and down to be sure it will now operate properly.
S

794' and I'm in the second to the top on the needle. Also, I found the leakage problem. I forget what it's called but the spring loaded fork that stops fuel flow in the BoFeng was stuck. I freed it up and went for a test ride, started up first try, and was able to ride smoothly for 4 blocks before returning home.

Engine not getting fuel

D
Engine starts up, but when given throttle, it bogs.