A True Test of Customer Service

I purchased two back rims from Grubee a month or so back. The total order came to over $320.00 from my recollection.

I've encountered a MASSIVE problem and this will be a true test of this companies customer service.

The rims arrived completely assembled with a single instruction for install that reads:

HEADS UP: Securely tighten 3 hub set screws after final sprocket alignment is established and everything is checked for chain to tire clearance and if used disc brake operation and clearance. Use a 2.5mm hex Allen Wrench to turn the (3) hub set screws securely down on top of the hD axle threads. Once the sprocket hub set screws are all locked down there is no need to ever remove the steel hub again as it should then become a permanent fixture.
Click to expand...

SO... I adjusted my sprocket (by spinning clockwise/counterclockwise) to where I wanted it to be. I then set the (3) hub set screws... removed the disc brake part as I didn't need it with a rim brake setup and went on my way. Things worked great for a number of miles until I got some slippage i thought was the clutch. An adjustment later and things worked again... but upon next attempt to start I got what I thought was some massive slippage in my clutch ...until I noticed it was the damn sprocket moving separate from the hub.

There is NO mention of either things included with the rims. I posed the exact instructions included with the rims above. I had NO IDEA there was supposed to be a set ring... until I went looking for a reason my my rim was not working right. I had NO IDEA I was supposed to leave the disc ring in place. There was nothing that stated so antywhere in the package I received.

I got the above instructions... and a receipt.

NOW... the hub is freakin ruined. I mean... RUINED. History... lets see what Don does. The man should replace the rim at his expense IMHO... where do you stand?

Here is the cluster "F" that is the hub....along with the lock ring that was on the INSIDE of the damn sprocket and that won't come off now. 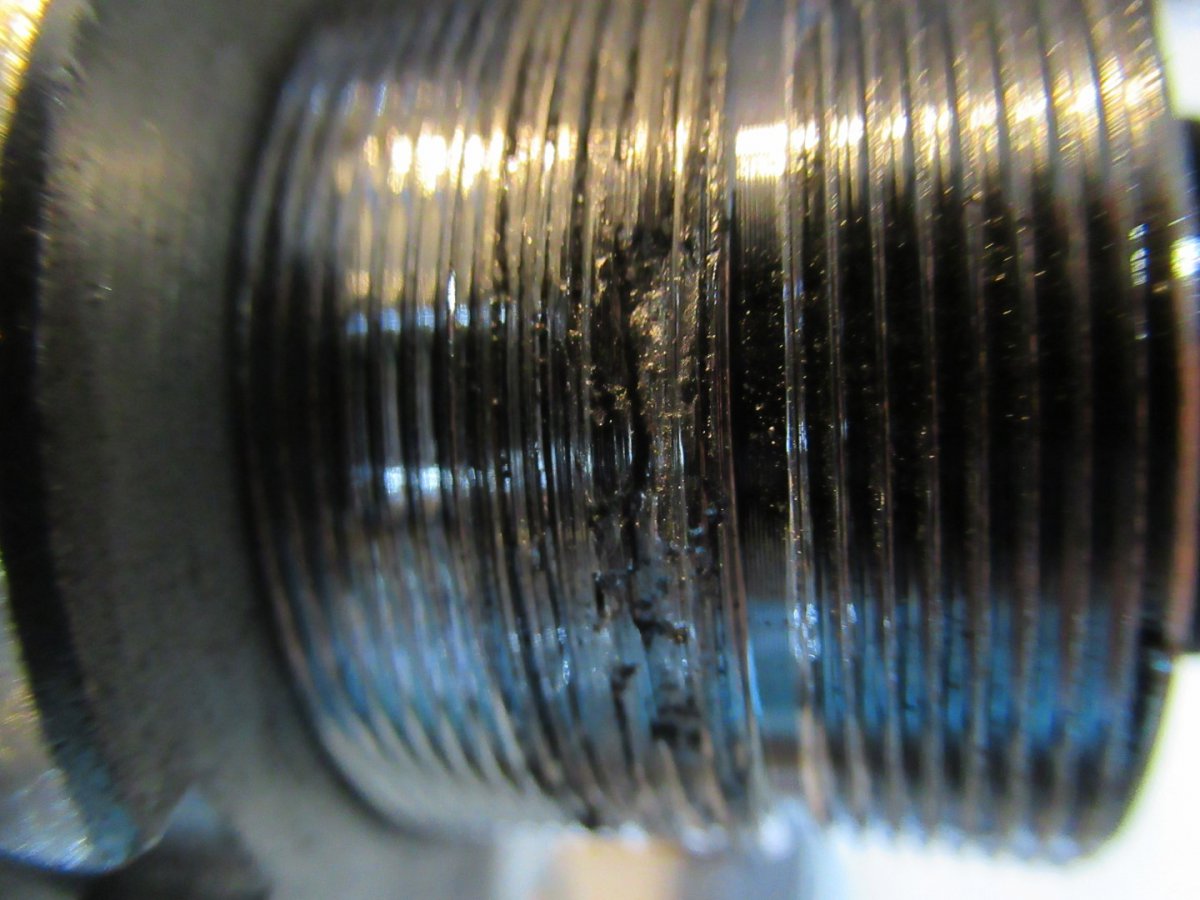 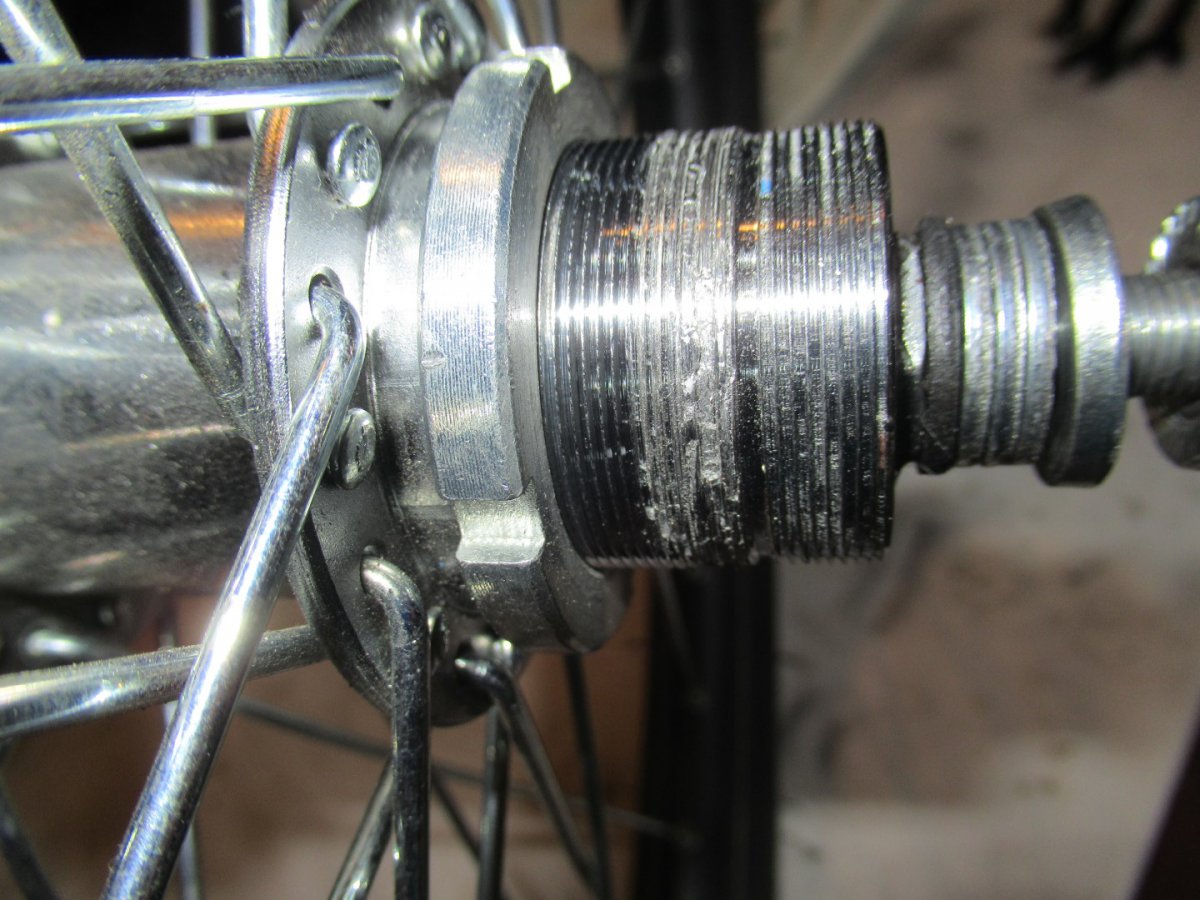 Are the set screws supposed to be tightened down on the threads? I've never seen that before in my life if so. Thats a disaster for those threads under any torque.

They are... but there is supposed to be a set ring (you can see it on the hub on photo #2) on the OUTSIDE of the sprocket...not on the INSIDE (as they came from the factory).

The set ring prevents the sprocket from moving...

I hope Grubee steps up and makes you whole. By step ring do you mean the lock ring in pic #2 that is screwed all the way onto the threads next to the spokes, or is that a machined part of the hub?

First round... Grubee offered to send me a hub to have installed at a local bike shop. After calling around and determining that it would cost me $80.00 to have the hubs swapped, I informed them of the price and suggested it would be less expensive to do a complete rim swap.

I also let them know from my perpsective, they should cover the shipping as this situation was on them. We'll see how that flies.

Thus far Don has been willing to send a new hub ... however he's stopping short of sending a new entire rim. We're still having discussions as I disagree with his assessment of the situation ... but an exchange may not be necessary.

Using a rubber mallot and a large screwdriver I was able to remove the lock ring from the hub. It appears I can actually get the different parts installed (with force)... I'm just clearing up a few things with Don first. Basically I'm asking him for "permission" to try to fix/use this hub... I'm 95% certain it can be done but before I brute force it I want to make sure the man is aware and gives his blessing. I don't want to do anything that from my perspective could jeopardize an exchange.

I am a reasonable person and if I can get this done with this current hardware... I am 100% A-OK with that. I'll put in the work.

Lets say that at this point, I am disappointed by the Customer Service response by Grubee...

Don has been very nice, but we have a difference of perspective it appears.

After my mothers death... and then my dogs 5 days later... I simply don't have the energy to fight.

Don offered me a new hub, but I'm not going to pay $80.00 to have it swapped in... and it seems like a half-effort on their behalf when a full replacement is in order IMHO. I refused. I've since beat my sprocket back in to place using a rubber mallot and a large screwdriver... using red locktite... If that doesn't hold, I'll JB Weld the damn thing in to place.

One thing I will NOT be doing is recommending Grubee to anyone at this point.

EDIT: For the sake of completeness, I feel compelled to post an image of the actual instructions received... 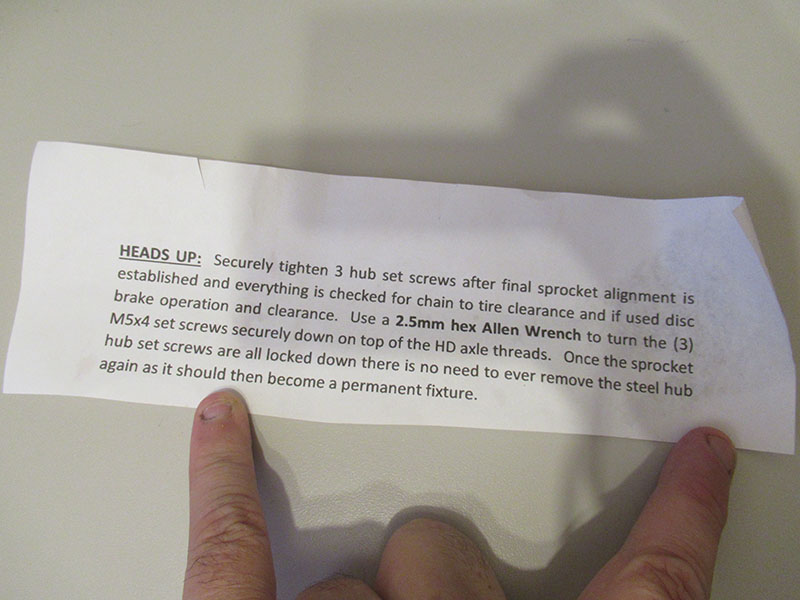 Can you show me a picture of the whole rim and set up please.
I might just have what you are looking for. Nice to meet ya by the way.

I'll have to look in the garage tomorrow, but i think i have a 12g spoke doublewall rim, single speed with a sprocket and hub clamp from Fred.

Yesterday at 10:27 AM
Sidewinder Jerry