Across America- getting to 'Frisco 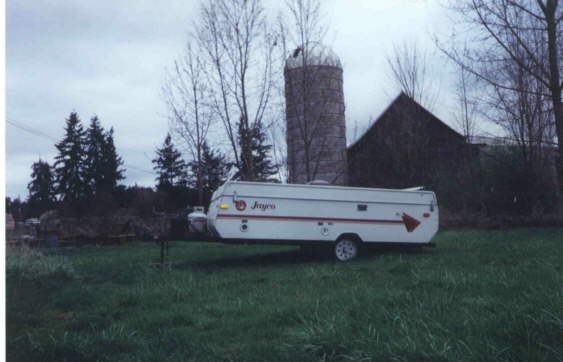 Fortunately my Father had brought some bailing wire along. Pop always carries some bailing wire in his truck. Throughout this journey I would be reminded repeatedly of what an important part of the support vehicle this was. I am reminded of Che Guevera's entry in "The Motorcycle Diaries" in reference to his comrades plentiful use of wire, and how it was his favorite tool for repairing 'The Mighty One'.
We cinched up the pedal by running the wire through in place of the bolt and then twisting tight to hold the ends together so the other block couldn't work loose. Once again we headed out towards our destination.
I was rolling along at a pretty good clip when the rains came. Such rains they were too! I rolled on with the rain stinging cold, like needles of ice, biting my face causing it to become numb to everything but those little freezing darts. With my expectations to the contrary, the main drive belt continued to grab hold and propel the bike. I was cutting a neat, clean line through the water flowing off the roadway with my tires even though the water, shedding from the crowned road surface towards the ditches along the sides of the roadway, was up over my rims. After about fifteen or twenty minutes it began to let up. The drive belt had only a minute amount of slippage through the absolute worst and wettest portion of that whole downpour. Chalk another one up to the Whizzer engine kits kids, that's hard to beat! The rain continually lessened until the sun nearly came out again. The clouds were still above, heavy with rain, but you could almost see a hazy circle of light that, some folks would try their best to convince, was the sun. After another 15 minutes had passed, all that remained of the squall was a strange mist rising from the blacktop.
I arrived at my destination; Interstate-5. Using my hand signals, I moved over into the left hand turn lane, and realized there was not enough vehicle mass to trigger the traffic signal's sensor mechanism. I looked quickly for on-coming traffic, then bolted across the lanes of on-coming traffic, up on to the sidewalk, around the corner, and pulled into the McDonalds parking lot where Mom was in her vehicle, reading her book, and awaiting the arrival of her boys. How she beat us there I'll never know, she must have past us when we were repairing the pedal in Tenino.
When Dad arrived a few minutes later my face was still numb. I found that I was unable to speak properly for a while until all of the needle pricks disappeared and the feeling had come back into my jaw and lips.
"So this is what I'm in for, eh? Well bring it on, I'm ready for it!" I thought this to myself with a slight bit of masochistic glee.
We ate brunch, speaking in short, hurried sentences of our anticipation and optimism. Brunch was a rushed affair, and before our seats had time to absorb any warmth we were loading the bike into the support vehicle, climbing into our respective vehicles, (Dad in the truck and myself riding as passenger with Mom driving her new Saturn) and bumping along the Interstate bound for California.
I will not go into describing the drive down to San Francisco; save for this one comment- I hate being a passenger on long road trips. It's just plain boring; I can't stretch or move or anything. My butt gets sore and my legs get stiff. There's nothing to do but read a book and / or sleep. It's nice, for a little while, when the scenery changes but then that all starts to look the same after a while, and boredom once again settles in.
I can hardly stand it, as boredom tends to help me become my own worst enemy.
We stopped at Yreka, CA for the night. Dad and I went to the Denny's next door and had some interesting conversations with some of the more colorful local characters.
Dinner, then to sleep, for the drive to Oakland...
S

Great story, you should link the articles on your website. Something that I've been wondering, what ever happened to the california replica engine?
P

I was wondering the same thing.
U

In reference to the replica engine, which one? The one we decided not to use because it wouldn't fit, or the scratch built hand cast replica?
BTW- I'm still having problems posting, it keeps kicking me back to the main index page...
I'm not trying to ignore this, i'm just having a lot of technical difficulties...
Rif
G

umm, dunno, but try setting your bookmark to motoredbikes.com if you haven't...for some reason that's been making a diff for some people.

give us details about the prob in "forum help" please?
S

If you had any info or pictures of the westinghouse engine you modified that would be great. The hand cast engine is drop dead gorgeous but a bit out of my skill or price range. I've been trying to collect as much info as I can on the machine and individual parts. I'd be especially interested if you had details on a patent number for the "duck brake" that came equipped on the California. I found an 1903 ad for the duck motorcycle brake but no patent number is listed. I've found all the info I can on the internet, however its spotty at best.
P

I was thinking of the home made one. Did Bob make it?
A

Hi Guys, I thought I would give a little of my side of the story of the Wyman project.
I too was obsessed with George's trip in 1903 after reading his story in "The Antique Motorcycle" magazine. I wanted to at least replicate his bike. But gave up on the notion of replicating his ride. Then by chance I met Rif at a local bicycle swapmeet. I was displaying my collection of antique bicycle engines, and I had the partially finished "California" engine there. Rif recognised the engine right away, and told me he was going to do the ride. We couldn't believe the coincidence, and we also live near each other. Well I volunteered to build a lookalike engine from a "Westbend" engine. I have a couple of these engines, and they are a powerful two stroke about 125cc. I have one on a mini bike and it does 40 mph. So here I was trying to make an engine from scratch, build a replica bike to put it in, and an engine for the Rif's trip. Boy did I over extend my self!
Well time was getting short I finally got the engine for the trip together, I had the frame at my house. But in the confusion of all these projects at one time I failed to notice how wide the Westbend engine was. it would not fit!!
HOLY SH** what a mess. I really screwed up this time. There was no time left to try and design a counter shaft system and all the related BS that goes along with it. and still test drive for gear ratios,etc,etc,etc.
It was all my fault and Rif was going to be the one to suffer. We talked about it and decided that a Whizzer kit was really the only way to go now.
Rif took it well, and I still feel horrible about it. But in the long run it worked out fine, he had Whizzer support clear across the country.
thats all for now.............Bob
G

this is a really interesting topic, guys...i hope to hook up with you all some day 8)
S

I'm really surprised how many people are interested in the little California motorbike and Wyman's travels. I had started trolling the internet for info a few years back and came across Rif's website, talk about being completely blown away. Now that everyone is gathering on this forum its even better. Its very cool that even after so long George Wyman still has a following.

Spring is here, the fleet is ready, let's see some flowers