Adelaide-How it began with me (mb case study)

This is how it began for me,

Twas a VERY hot summer in Feb 2006 when i finally bit the bullet & made the purchase of a 48cc from -(www.zbox.com.au)

At this Stage the larger 70cc was'nt available,..

Heavy package arrived less than a week later,
and this is when the hassles, fury,errors ,trials, & ultimately enjoyment started.

engine in the following pix are 48cc CHINESE 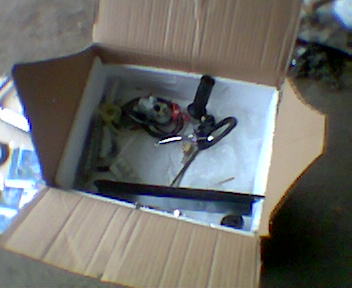 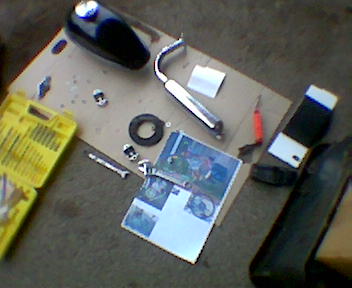 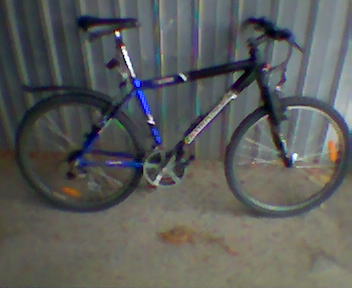 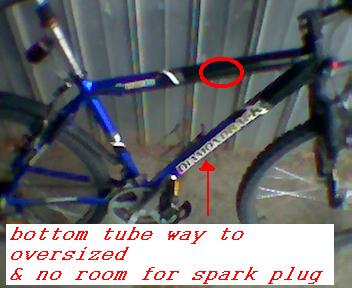 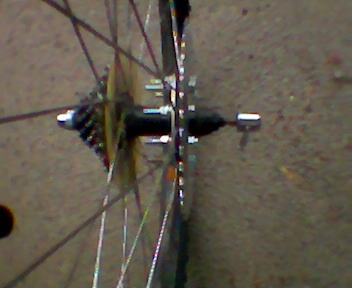 Done the Rear wheel Anyway, as i was tad disillusioned ,
need to think and that. :? :?
AAHHHHHHHHHHHHHHHHH, I thought...
Quietly while whistling & looking- up & to the side,----
I removed my girlfriends Bike from the shed and accidentally bolted the motor onto it. . ,then the rear wheel,

with the only issue i could see was the Fuel tank outlet below induction. 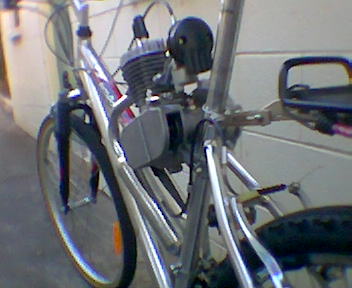 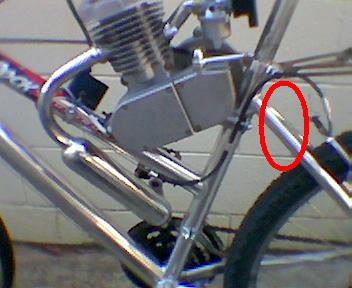 An extended chain was used, but it was all a waste of time, as the chain (no matter how it would be tensioned / guided)
would Make contact with -CASING /REAR DOWNBAR or ITSELF ..

Just to get a little satisfaction (though HOLLOW) , i wanted a final product picture , so i continued by bolting the fuel tank & Handle bar gear ... Got the picture , then stripped the bike , as though it never happened (except for a few deep scratches in the aluminum frame.. 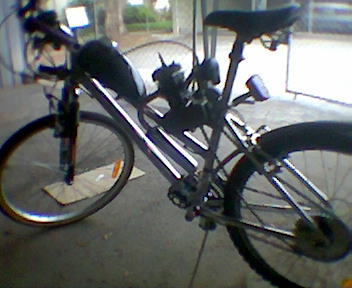 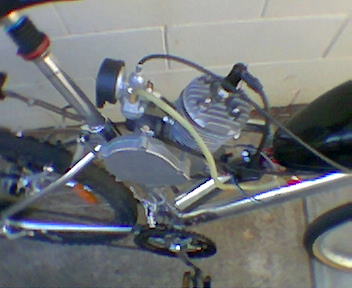 Spent the next or so week scouring second hand /pawn shops, but nothing was right, Or if so was a RIPOFF-(go new style prices)..
Speaking of new
Big w had a decent mid priced bike that was alloy & motor fitted (took the motor into the shop and fitted it to make sure-odd looks a plenty!

Anyway --a friend Finds an old mountain bike in her long overgrown grass,(it had been powdercoated at 1 stage so rust on the frame wasnt an issue..
& suited me just fine ==It was FREE 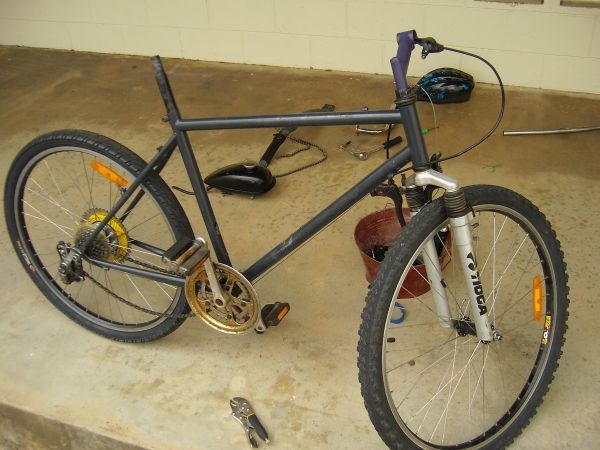 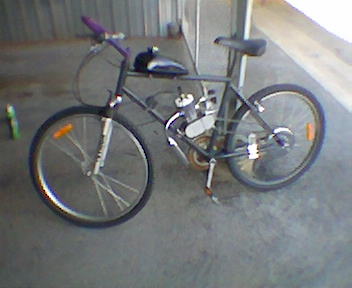 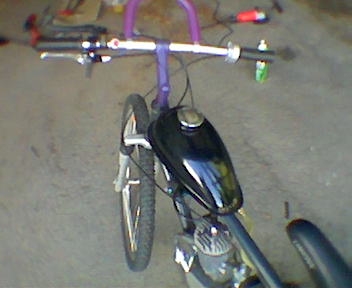 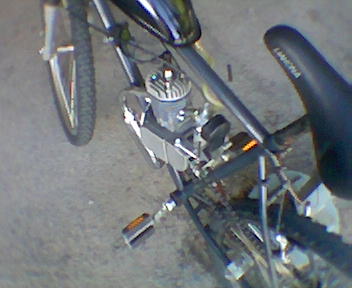 The pedals -seized in cranks.. The front shocks were also seized,

But this was it , this is when it gets good, when once you've done your first ride,
you HAVE to ride>>>, ..
EVEN then ,,when the blood in my hands had curdled,
(due the lack of give in the front end)
I just keep on it

I Was OK, Bit bruised /Couldn't straighten arm for a few days, but more OFFED about the bike.


A 70cc..Purple & Black
DiamondBack,
RockShox
A bit rough
Bought for $50 At Cash Converters. 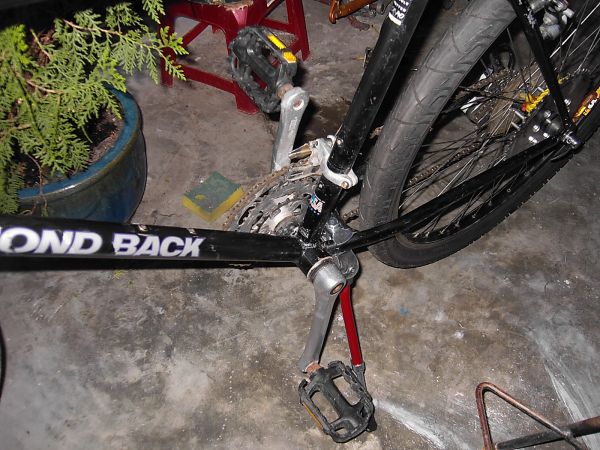 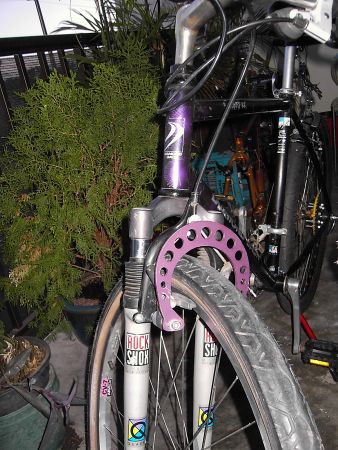 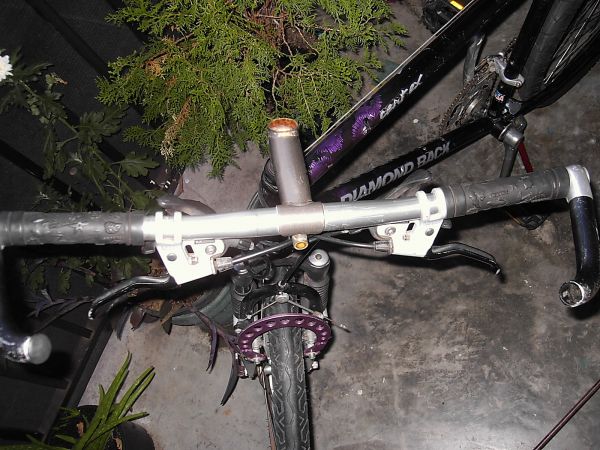 Scored this indicator assy of ebay. 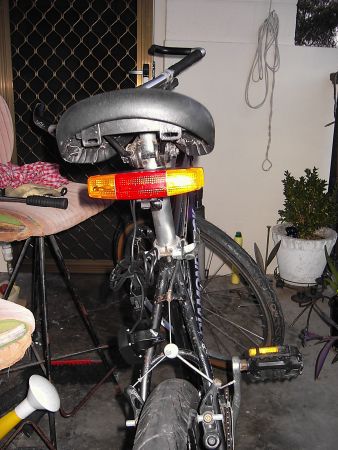 This was pretty solid with the 70cc (thou i have no pix of the motor fitted.)
Though the motor was in run in stage when it was on this frame,
Getting nearer to.. rings seeting , my rides could get longer,
BUT not for LONG
Only the result ... 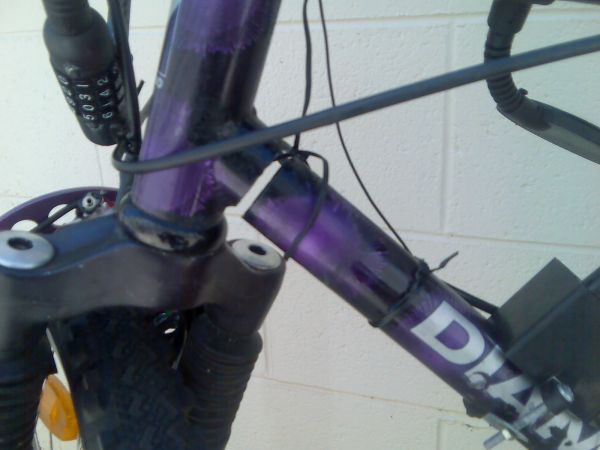 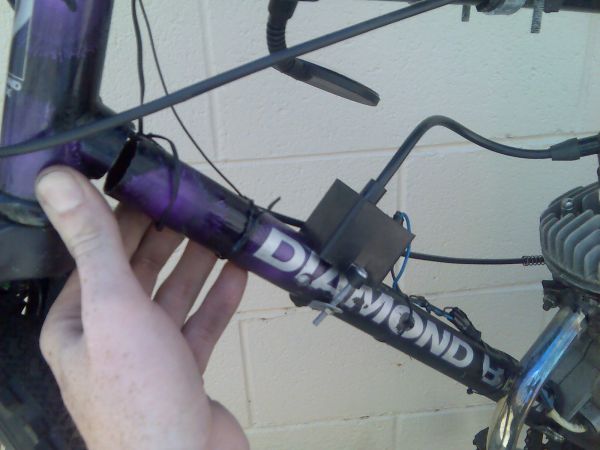 The frame was a Cro-Mo, but it did have some stess in the area it
cracked,, in the form- of I reckon-- repaired Rust (acid treatment type),, and was pitted , but pre BREAK , wasn't a worry, .

The bike felt so ODD at the moment it happenned,
But i didn't Know it happened AT that POINT also.

I was luckily only meters away from home when FloatY MOMENT occured.
After a pretty good ride-

Henley Beach -along cost-to- OuterHarbour around the point to
Pt Adelaide ---Then back down Frederick Rd-- back to Henley beach..
Google map it if you feel, a great ride.

A bit of dejavu..
THis is familiar to me ,now ive 2 motors No bike..

$50 -no wheels-SWEET.
No worries -hez happy
-Im In with a chance Of hitting the streets ASAP.
And finish running in motor...

This was done exactly on the day the other picks at Glenelg were taken.
As in my other post.
ADELAIDE-glenelg ..


Peddle home,Take head off,
and cylinder has a nasty SCORE above the left hand scavenge port.
WTF.. Ive had a guts full.
I claimed for warranty, Slight debate about that, but they came to the party, but , due to delayed shipment/ then wrong parts in the next shipment, it took AGES for the replacement parts to get to my door.

My parts have now arrived!!
So i can continue my story.
New cylinder + piston +rings. 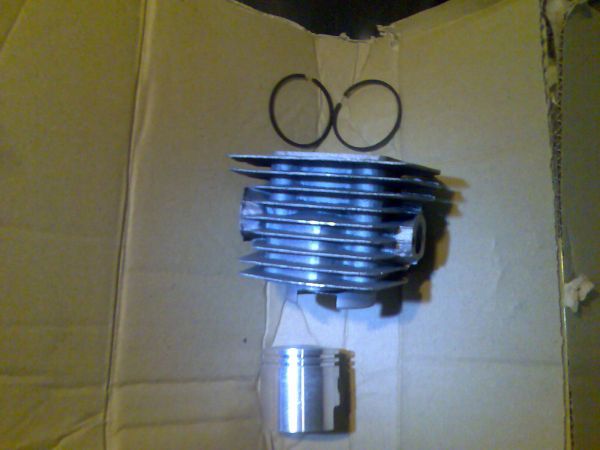 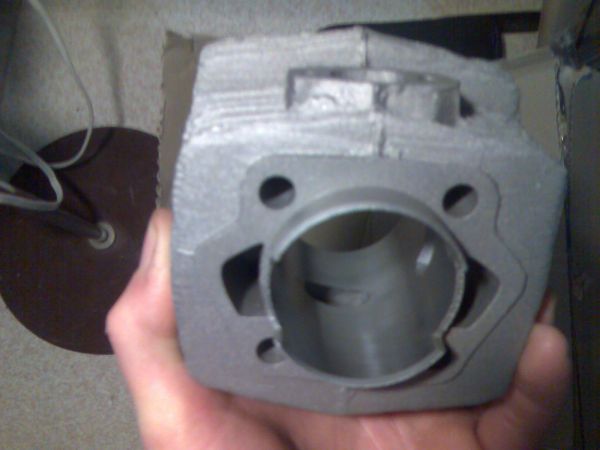 to be continued soon.

Thanx for reading this story.
M

Hope you you not hurt.
G

What a great story.

I laughed, I cried then I laughed again.
S

funny story, it had a plot, various characters - I was really engrossed.
G

and accidentally bolted the motor onto it.
Click to expand...

what an interesting story, it's cool you got pics, or we'd have never believed you (not true, we'll believe almost anything when it comes to the "happy-time")
D

Hi all.
My bike fix has taken a back seat to a Newly acquired HONDA CT110 POSTIE BIKE.
So all my spare time has been on that instead.
But it wont be long before the honda is restored
and and the TOPGUN - FLIGHT has my undivided attention ..
jase
I

I presume at 60km\hr you were going downhill with the clutch in cos that is the only way you'd hit that speed. Did the back wheel lock up because the rim failed or the chain came loose and got sucked in or both? Don't quite understand what caused the lock-up although I've had the same happen to myself but never at great speed. I don't think you'd survive a lock-up at high speed. Cycling Australia's magazine says that hitting a labrador at over 50 km\hr is usually fatal on a push-bike!
W

what a great story from a fellow aussie, its amazing how a rusted up old
bike still has life in it...well done and avoid cars, they hirt. WS
D

Irish John said:
I presume at 60km\hr you were going downhill with the clutch in cos that is the only way you'd hit that speed. Did the back wheel lock up because the rim failed or the chain came loose and got sucked in or both? Don't quite understand what caused the lock-up although I've had the same happen to myself but never at great speed. I don't think you'd survive a lock-up at high speed. Cycling Australia's magazine says that hitting a labrador at over 50 km\hr is usually fatal on a push-bike!
Click to expand...

Hi all again, its been a while, and it's time for me to get the TOP FLIGHT going again..

Irish john -- I was on flat ground when it happened at full speed and top revs,
When the back wheel locked , i was able to manouver the bike on to the dirt/grass on the side of the road--ie: (no curb or gutter to make me come off)..
so yeah the back wheel LOCKed up due to a broken ring scoring the cylinder wall and the piston just FROZE...

it took a LONG distance to come to a stop, but as the SKID was on dirt my rear tyre didnt burst.
My speedo at the time of incident actually read higher than my quoted 60k/m , but i rounded it down to 60 in my story for the sake of any speedo "error" , but man it was flying and it was a HAIRY moment...

Peace and stay safe on the road all..
D

This is my Top Gun 'FLIGHT' just after completion and first run..
Before any dramas..

as in my other post Adelaide to Glenelg Beach

at Glenelg ( next to Patawalonga lake )

S
How to fix my chain from breaking.
2 3

Need to make some wheel choices
2