Another Happy Time 4-stroke is on the way 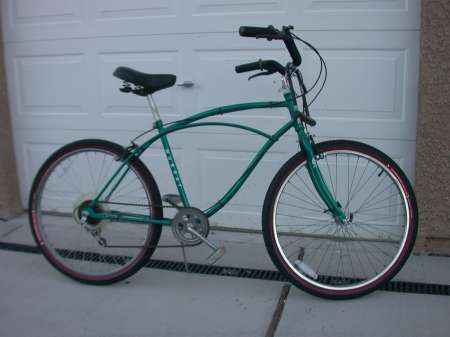 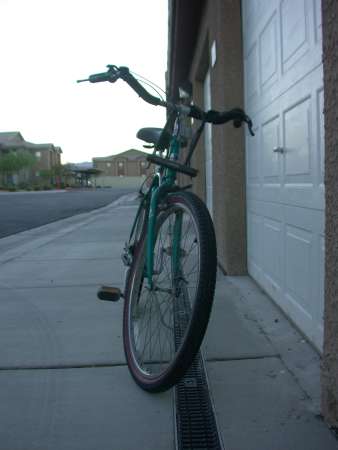 I've had this bike for about 10 years now; most of the time, it sat locked up on the porch outside where I used to live. A couple or three years ago, I picked up an aluminum-frame bike with full suspension and rode that a bit...it's a smoother ride, but from what I've read here, aluminum frames, suspension, and bike engines don't go too well together. 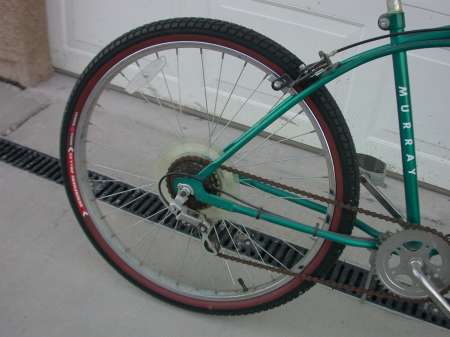 This one's a basic steel-frame 6-speed cruiser, bought off the rack at Wal-Mart. To get it ready for use again, so far I've replaced the el-cheapo tires with Kevlar-lined (IIRC) tires from a local bike shop. They're still not as big as the 2.125" tires that came with the bike when it was new, but at 1.95", they're still better than the 1.75" el-cheapos I had on it. It already had a digital speedometer that just needed a new battery to get working again. The handlebar grips are shot, but the engine kit comes with a twist-grip throttle for the right side and a matching grip for the left. With lights and the engine, it should be good to go.

There's also a chainguard that's not installed right now...the rear screw fell off at some point and I couldn't find one short enough to go on without jamming the rear sprocket. I'm thinking of just using a zip-tie to hold it on at the rear and a screw up front.

I just fired off a payment for this 4-stroke kit a few minutes ago. I'm guessing it'll arrive sometime early next week. The few other people who've bought them so far seem to not have run into problems, so I'm looking forward to some quality time in the garage in the near future to get this beast up and running. It ought to be a fun way to get to and from work. 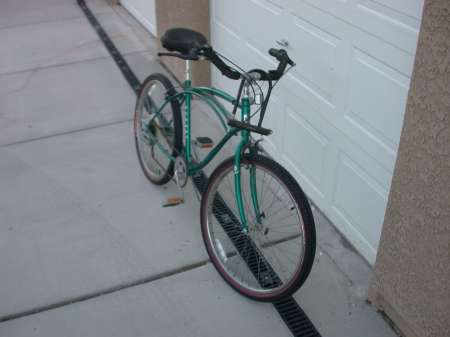 That really looks nice for an engine. Good luck.

Congrats on the thumper! Please fill us in on the quality of the kit and how it performs.

Nice Bike I'm looking for a Schwinn Sting Ray that looks like the 1969 model I used to have, when I was nine, it got stolen.
You know the ones with the slick for the rear wheel!

I've seen them with the engine installed.
S

Random hoses hanging off the carb

The engine arrived yesterday. The twist-grip throttle was damaged in shipping and I need to see if I can convert from the current one-piece crank to a three-piece setup (or get a wide one-piece crank someplace), but the install is now under way.

I started installing it after work...got the sprocket put on the rear wheel and the motor mount on the frame. The engine is loosely bolted to the mount just to verify that it'll fit (it does).

The Engrish in the engine manual (it doesn't cover the other bits) isn't too bad as such things go, but there's nothing in it that addresses these hoses that are hanging off the carburetor.

This is the right side: 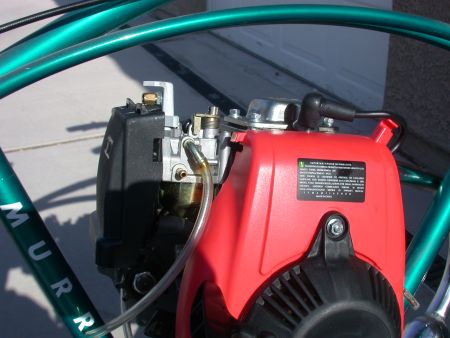 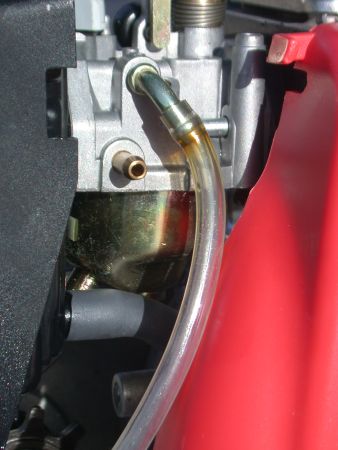 This is the left side: 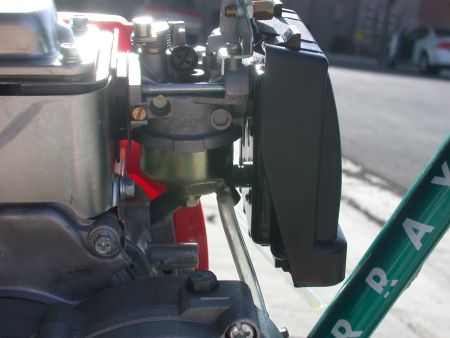 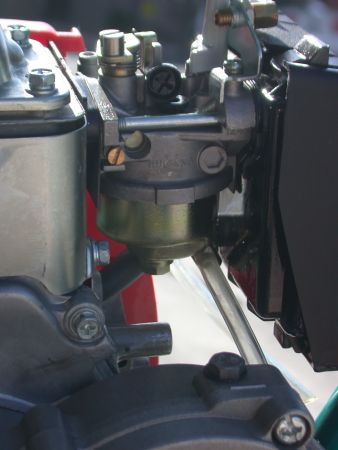 The one from the left side looks like it's coming out the bottom of the fuel bowl. I'm guessing this is where fuel enters the carb. What are the connections on the right supposed to do?
M

Hi the one on the bottom is overflow/drain hose. One is vent, one is supply. So, if you have problems figuring it out, I can look at mine for you, Mike
T

The wider crank is supposed to be included; the 4-stroke kits I see online have it. I wonder why your kit didn't? Let us know how she turns out!!
S


tomcatfranks said:
The wider crank is supposed to be included; the 4-stroke kits I see online have it.
Click to expand...

The replacement twist-grip throttle arrived yesterday. The grip area is rubber instead of metalized plastic, which I think will offer a better grip, and it doesn't look as "blingy." The cable from the killswitch was too short and missing the connectors on the engine end, but it was a few minutes' work with a knife and a soldering iron to swap cables around.

When I first hooked up the throttle cable, it wouldn't let the throttle close. I ended up fixing that by screwing the right-angle piece further into the twist-grip body...was a bit worried that I'd crack the plastic and need yet another one, but once it was put together, the throttle moved over its full range without binding.

The engine shipped with oil in the crankcase. Not knowing of its provenance, I dumped it out and put in a half-pint of Quaker State 10W30. Whatever oil you prefer to use in your cars, I'd recommend replacing what comes with the engine (but don't use synthetic oil for your first few fills, or the rings won't seat properly). There was a visible difference between the "Happy Time" oil and the Quaker State. The former was more pale in appearance; it looked almost like power-steering fluid, or the oil used in air compressors.

The fuel shutoff valve has a 1/4" hose barb on it, but the carburetor fuel inlet has a 3/16" hose barb. A couple or three dollars at Lowe's/Home Depot/whatever will get you the pieces you need to neck down the fuel tubing.

With the engine and fuel tank mounted to the frame, the twist-grip throttle on the handlebar, and the muffler bolted on, I fired up the engine. It took a few pulls the first time and made a bit of smoke as the oil in the top end burned off, but it idled smoothly and quietly. It makes a bit more noise (especially from the gearbox, it would seem) when you gun it, but at least it runs.

The chain needed a few links taken out. Others have described grinding off the exposed end of the pin, but there's a better way. The same tool you use to work on bicycle chains can be made to work with the heavier engine chain. The pin lines up properly, but the chain tended to ride up out of the tool when I started pressing the pin out, so I held the chain in place with channel locks and pressed the pin most of the way out. The tool won't press it all the way as the engine chain is wider than a bike chain, but you can grip the chain with the channel locks and the pin with slip-joint pliers and pull them apart to finish the job.

I then installed the chain, the chain tensioner, and some lights, and put some more gas in the tank. Las Vegas was getting dumped on pretty hard (it's monsoon season), but by the time I had put up my tools and picked up the trash, it had mostly stopped. Even though I can't pedal it in its current state if something were to happen with the engine, I took it for a ride...first a quick one through the parking lot, then a longer (~12.5 km...speedometer is set to metric because I could, and the bigger numbers are more impressive ) one around the neighborhood.

The chain tensioner needs to be adjusted to take out more of the slack, but overall it ran pretty well. Top speed on level ground with me (who could stand to lose a bit of weight) on it is around 40 km/h. Climbing freeway overpasses (I wasn't on the freeway, but there are frontage roads around here that run parallel to it), it slowed down a bit to 35 km/h. I think 30 would be a good cruising speed for this rig; it climbed an overpass at 30 without needing any extra throttle. In any case, it's faster than I'd get that bike going on nearly anything but a downhill run.

The fuel tank also tilted sideways while I was out, but that's just a matter of tightening the bolts a bit more (and maybe putting a rubber strip between it and the frame. Going over all of the bolts that hold everything together probably wouldn't be a bad idea either.

No more pictures yet as it's a bit dirty from road spray. In addition to the three-piece crank conversion, I need to get some fenders for it. Turn signals and a horn would also be a Good Thing. I'm thinking I can make LED-based turn signals that would also include the taillight without much difficulty. (LED headlights would also be cool, but properly integrating those would pose some packaging difficulty to get the light thrown down the road properly...maybe some of these could be adapted to work.) More pictures should be available in the near future.
A

Hey, here's a tip for anyone converting to a three-piece bottom bracket: Most bike shops have the kind with cups and bearings in races, like any ball bearings, you get better results if you pack in "loose balls" instead of using the ones in races. If you plan to pedal a lot, though, this one is WAY better:
http://www.danscomp.com/455021.php?cat=PARTS
This one is easy to install and seems mighty tough. I got good service from the vendor, too. Should be easy to substitute a REALLY long axle in a setup like this (locking collars attach anywhere on the axle).