Bama, did I read it right that you are getting 250 miles to the gallon?

I tried to get scientific, living in hill country and all, with measuring cups and mileage down to the tenth of a mile, measured by car odometer.

Popular Mechanics and GEBE is who said 250, but that was the old belt/gears, the new ones have more depth and kevlar.

The tank is 22 oz. and I carry 2 spares in Swiss bottles.

Which gives me a 130-150 mile range. On that Mobile trip I got really close to peddling once, and figured I went about 140 miles with the three "fillups" before finding a station.
W

That is impressive. I am curious if you added electric if the additional wieght would give much benefit to augment the petrol. i.e. would it ne concievable to get an additional 40 miles out of an electric and kick it up to 282 per gallon?

this should prolly be on the main board, then again, here we are having dialogue organically, the design and engine placement haven't captured my imagination, however, the performance specification have. The old Form follows function, as I have stated to Augie, i think form should be a function in the design, if that makes any sense.
W

I guess my real question is why do you get better mileage?

The efficiency used to be around 75 percent, now, with the heavier belt, it's moved up to over 90%.

Up in E. Lansing, where GEBE is, there are airplane engineers, using recumbents with windsheilds, claiming over 300 miles per gallon.

But belt drive, coming off a small gear (about the size of a quarter) above a large snap-on ring, (approx 20 inches) driving on the spokes is scientifically more effective than two semi-similar sized gears on front and back.

I'm liberal arts, but the ratio seems multiplied by 10 at least.

The ONE big warning is, the bike/engine seem to meld physically to a single rider, the belt will easilly last for thousands of miles, until some fat college buddy jumps on and doesn't hear the engine "talking to him", shredding said belt on the first major incline.

I use a cruiser single speeds for my demo rides, don't let anybody on Rocinante.
W

Bama, thanks for the explanation, lot's to think about.

Bama, does the horizontal versus vertical have anything to do with the improved performance or is it just the gear ratio that gives that added mileage?

I definitely think being above/vertical has a lot to do with it. The drive ring that snaps on to the spokes has grooved and flat areas for the grooved belt to "drive" (the gaps allow it to idle, if the spoke ring had no gaps, the thing would take off when you cranked it.) 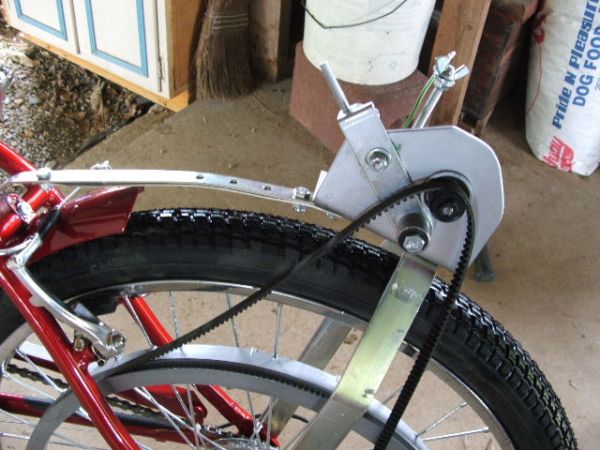 It sort of has the effect of "throwing you forward", if you know what I mean. My simile is a squirrel cage fan, throwing air out.

In other words, especially on level or declines, the belt, grabbing into those grooves on the spoke/drive ring, is "thrusting the bike", like a push from behind.

On inclines, it does have more of a "pulling" feel, as if it is having to overcome weight and gravity. In most cases you can lean into a hill, and not have to assist until maybe halfway up, and in familiar territory, get a jump on major inclines.

Looks efficient, I am reading a few more of your posts BAMA, good stuff. I worked in the Airline Industry for 15 years.