The crash occurred around 2 p.m. at the entrance of the Giant gas station at the corner of Baca Street and Cerrillos Road. Paramedics took the trike rider, whose identity wasn't immediately disclosed, to the hospital as a precaution.

His only apparent injuries were scrapes on his legs and arms, according to Santa Fe Fire Chief Chris Rivera.

Police said it's likely no citations will be issued because the accident happened on private land. Police Capt. Gary Johnson said the cyclist was trying to take a "short cut" to Cerrillos Road through the gas station when he struck the van, which was leaving the parking lot.

Low-profile tricycles like the one involved in the crash are less visible than conventional bicycles to motorized-vehicle drivers, according to Willard Chilcott, a local bike enthusiast who owns a recumbent. 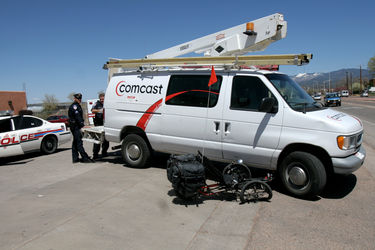 The tricycles, sometimes called "bent bikes," are arranged so the rider sits in a chair-shaped seat and uses pedals positioned directly in front of them.

"You are more exposed to traffic than you are on a conventional bicycle because you are much lower to the ground," Chilcott said. But he said all recumbent tricycles he has ever seen have bright flags on them to make them more visible.
Grant Franks, his son, Leonard, and wife, Martha, all ride recumbent tricycles and know of about a half-dozen others in Santa Fe who ride them.

Franks, 51, said he started riding during a "midlife crisis" in 2003. He disagrees that the tricycles are unsafe and has traveled cross-country on them twice.

"I have 5,700 miles on mine, and I have not been run over yet," he said, noting that people frequently inquire about safety. He finds the ride both comfortable and stable, not to mention fun, he said.

"With three wheels, I don't worry about stability at all, which means I can be thinking more about what is going on around me. ... It's like a lawn chair on wheels," he said.

Carmen Valadez, Comcast director of operations for Northern New Mexico, said she had been informed of Wednesday's incident immediately but would not make any comments until she saw the police report.

The company has about

20 to 25 vehicles on the road on any given day, and all drivers have to have good driving records, she said.


I am guilty of taking shortcuts.

However, I have more than 5,700 miles, can only remember ONE parking lot "incident", which I'll take the blame. No biggie.

And on the open road, I think the whole panorama has to be experienced, the main weapon is a decent mirror.

My only close call there was at an intersection in El Dorado Arkansas, MY RIGHT OF WAY on a right hand turn, but I saw the bastard in my mirror.

One hint about a mirror: If you are on the highway, see a vehicle appear, count "One Mississippi/Two Mississippi.......Eight M...." and the car/truck passes.

It turns into a habit, that counting, because if nothing happens in 10 Mississippi's the car is probably slowed down & watching you. I have had a lot of cars follow me for up to 5 minutes, usually waiting to see me climb some upcoming grade.

Tricycles should have flags, that should be obvious. But, I am guilty of sloth in the helmet department too. The trick to mid life crises is make a lot of noise, and know the neighborhoods....that will keep motorists alert.
Can I hear an Amen?

Please Note: I bogused up the "Poll Question" right off the bat by voting NO.

I think Abby Hoffman said it first "Lie to Every Pollster".

In 1990 the US Census Bureau made an error and sent me the long "97 boxes to fill in" questionaire. I made over $100,000 and had no indoor plumbing, and Uncle Sam never asked me anything again.
L

I most likely called them something like You knuckleheaded,.
Last edited by a moderator: Aug 23, 2007
T

I usualy curse at them with curses that would make the devil himself blush.
T

Although, I am usualy at fault most of the time
T

this just proved my point that a person asked me

he said (what do you think of those lowprofile trikes)

well i told him um .......... ROAD KILL and here you have
a news articual aboute it proving my brain dose work at times

From FoxNews- Off topic maybe, but wheels/engine/wings and guns don't mix.

AMERICAN FORK, Utah -- A 42-year-old man fatally shot himself while in the air before his motorized paraglider crashed in Utah County, authorities said Thursday.

"Prior to the crash, witnesses stated that they heard what they thought may have been a loud pop," the sheriff's office said in a statement on its Web site.

The man was identified as Greg Kehl, 42, of Eagle Mountain.

Kehl was involved in a domestic dispute and fired a shot when someone tried to prevent him from grabbing a key to the aircraft Wednesday, the sheriff's office said.

Witnesses said they saw the paraglider fly over a park and two golf courses before it crashed around 6:15 p.m.

Deputies still were looking for the silver handgun Thursday, although Kehl apparently died of a self-inflicted gunshot wound, the sheriff's office said. An autopsy was planned.
Click to expand...


I guess he wasn't going to take any chances that simply crashing wouldn't do the job.
D

Wonders never cease on the new and improved idiots.

So I have a basement full of bikes again.