well thare is a ipod/radio thay sell at walmart thay work real good. only $14.99
A 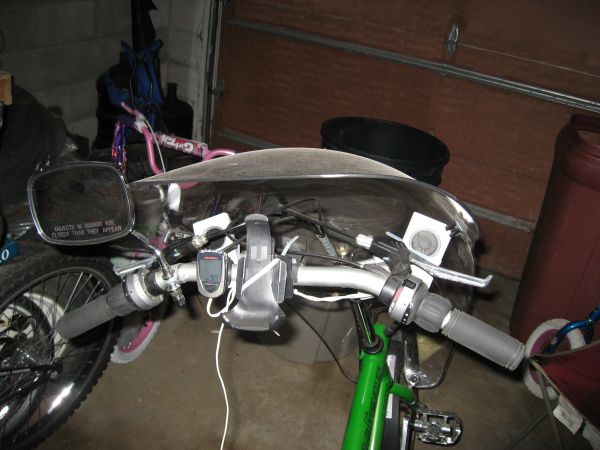 i can hear my xm over my gebe 32cc 2 stroke with these crappy little sony speakers. YMMV.
A

they run on a couple of triple a batteries. mine are held on with nylon ties (zip ties).
D

I got a little cheapo flash MP3 player recently, partly to have music while riding. I tried a little "bag speaker" that your music player goes inside, but mounting it to the bike was a hassle and overall it really didn't work that well. I rode a couple miles messing with it, then turned around and went back home, and got the headphones instead.

What I found was what a lot of other people said--that quite frankly, headphones work best. You can turn them down to where you can hear ambient noise, so it's not much more a safety risk than having speakers on the handlebars would be. And the earbud kinds are placed in your ears, they don't take a lot of power to run--so the music player's batteries last quite a while too.

In a lot of places, operating a vehicle on the road while wearing headphones is illegal...but from a safety standpoint it's no worse than someone driving around blasting music from a 1000-watt car stereo, and people do that all the time, and there's no penalty for it. Saying headphones are bad when people are allowed to blast music at deafening levels from regular speakers doesn't really make too much sense.

Is engine kit compatible with bike
2 3