Building up a 27.5" Huffy Parkside into something far more fun.

This all got started back in February when I purchased a cheap ebay kit for $90 to slap on my Huffy as I was getting sick of getting huffy from riding to the store. 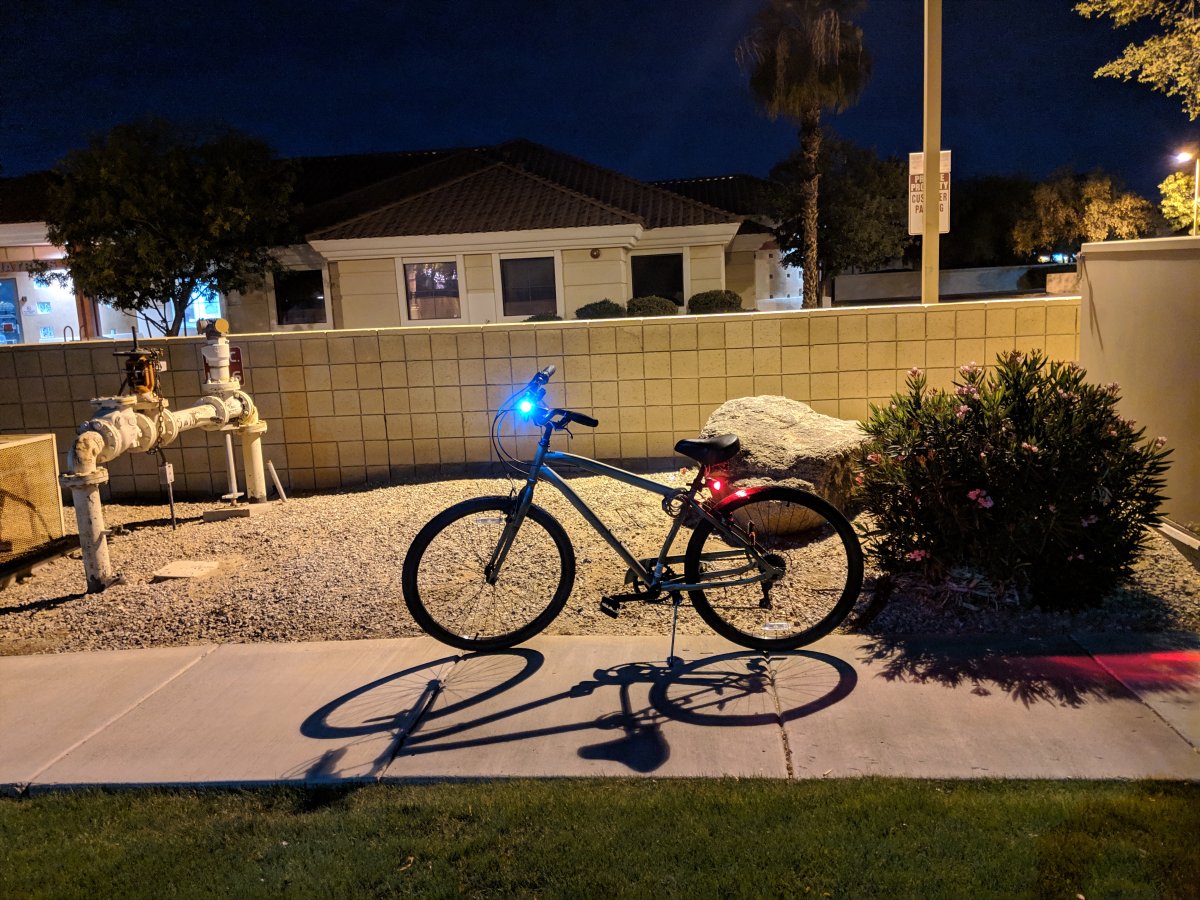 It was one of the newer style motors with the single piece head and cylinder with a 32mm intake and thin as f*** mounting hardware. Despite being more than skilled mechanically, trying to get that damn rag joint mounted sprocket to align just about have me a stroke. 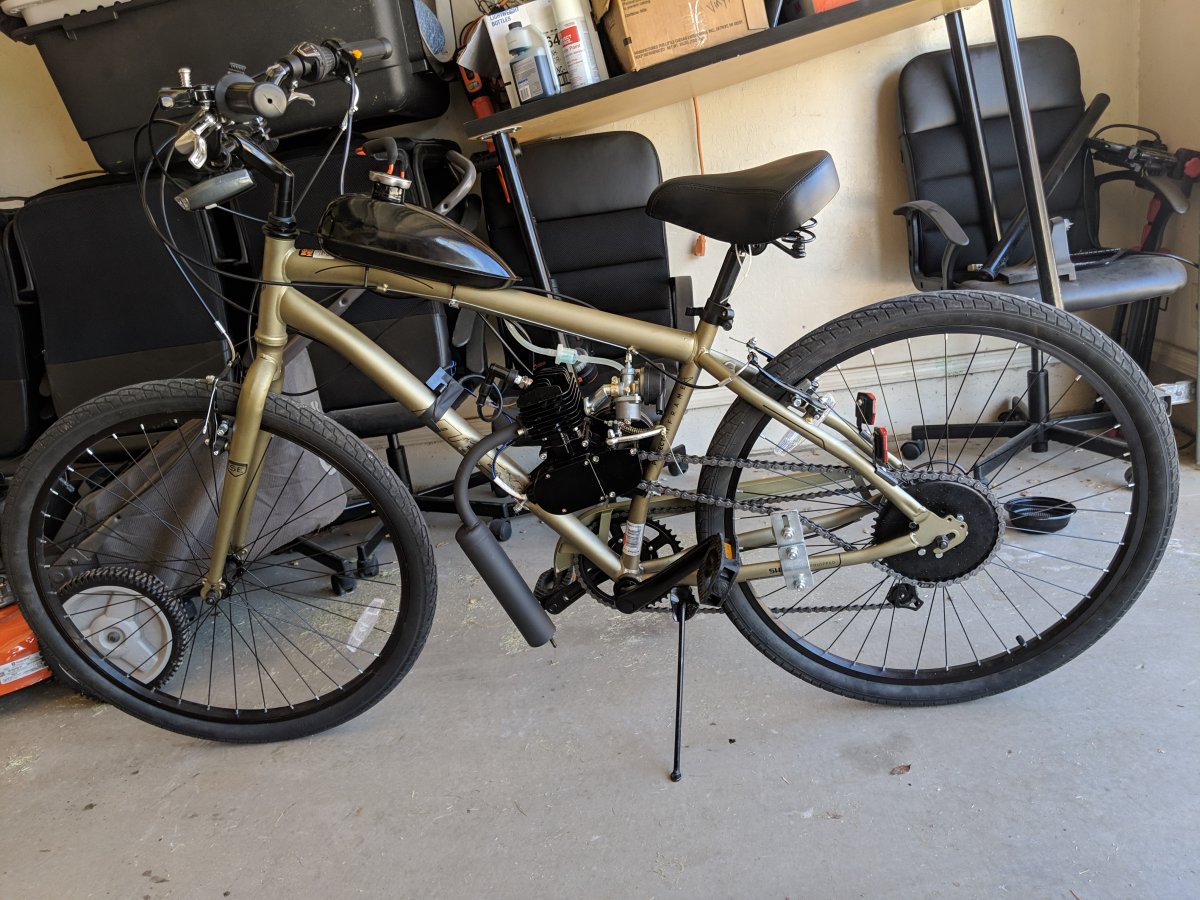 As Chinese products are usually made out of chineseium, so was this engine kit and everything started to break within the first two weeks. First it was mounting studs snapping, then came the fuel tank's mounting studs tearing the sheet metal, the motor soft seized at least once, it had little power, etc.

So after 2 weeks of ownership I went ahead and ordered a "poor boy" zeda 80 from zeda l motorsports which is essentially ported jug on an untouched base assembly. It seemed like a great deal but upon reflection it was the same exact kit as his ported zeda 80 for $50 more.(now it comes with a better head long with the porting work).

Along with that I ordered a 3.5l bikeberry gas tank to replaced the damaged kit tank and what I thought was an mz65 pipe (the dreaded zeda 88/cdh66). 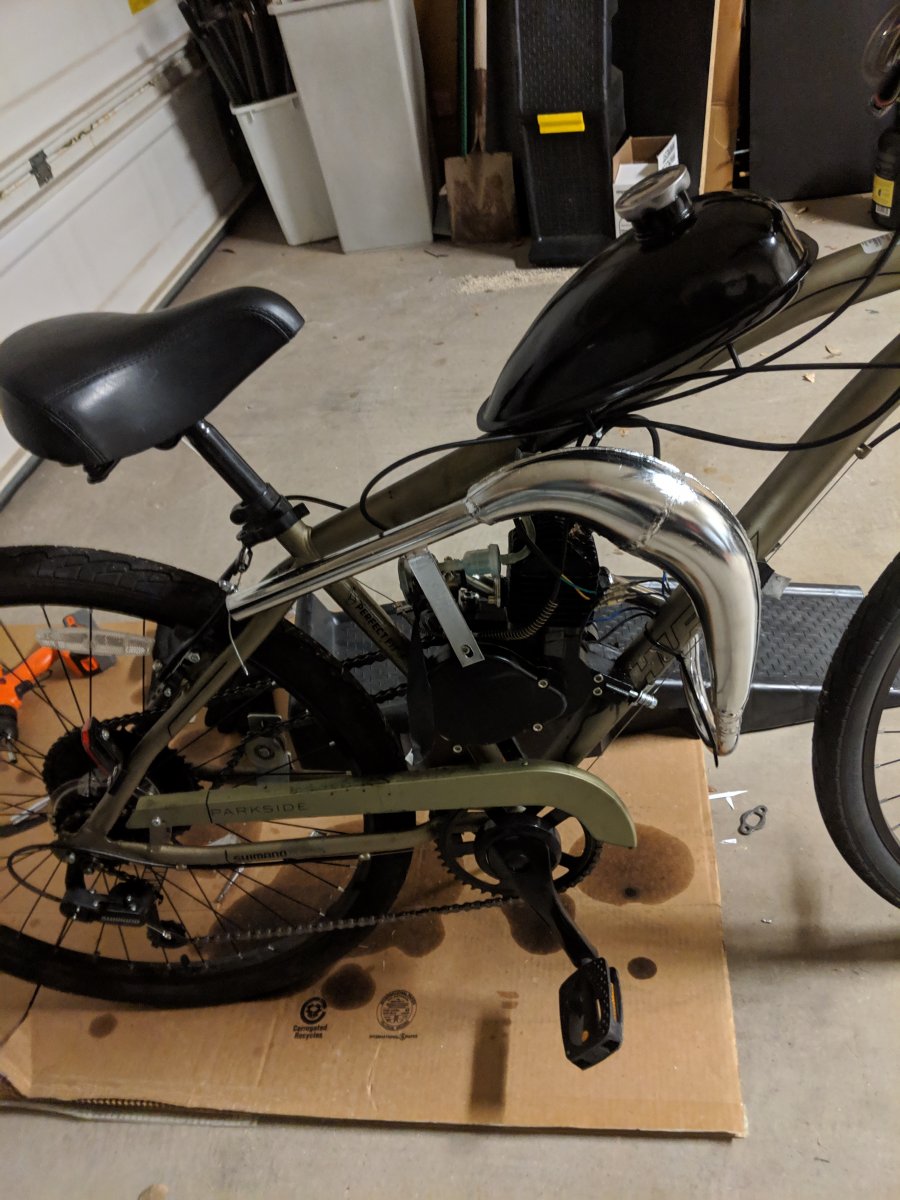 That turd expansion chamber really woke the eBay motor up and made it almost pleasant to drive, if it wasn't for how goddamn loud it was for how little power it out out. So I grabbed that cheap silencer everyone uses from Amazon but wasn't able to get it to easily work.

Frustrated, I figured that if I was going to run loud that I'd atleast have a decent pipe and snagged up a beautiful condition mz65 pipe off of fb for fairly cheap. After a couple of weeks the motor came in and I excitedly got it installed. The moment I got it to fire and I felt the first couple pulses of the engine pull the bike forward, I fell in love. It was an entirely different experience compared to the ebay trash I had before. All that power and this was just simply a zeda 80 with only some cylinder porting and a cdh66 pipe! 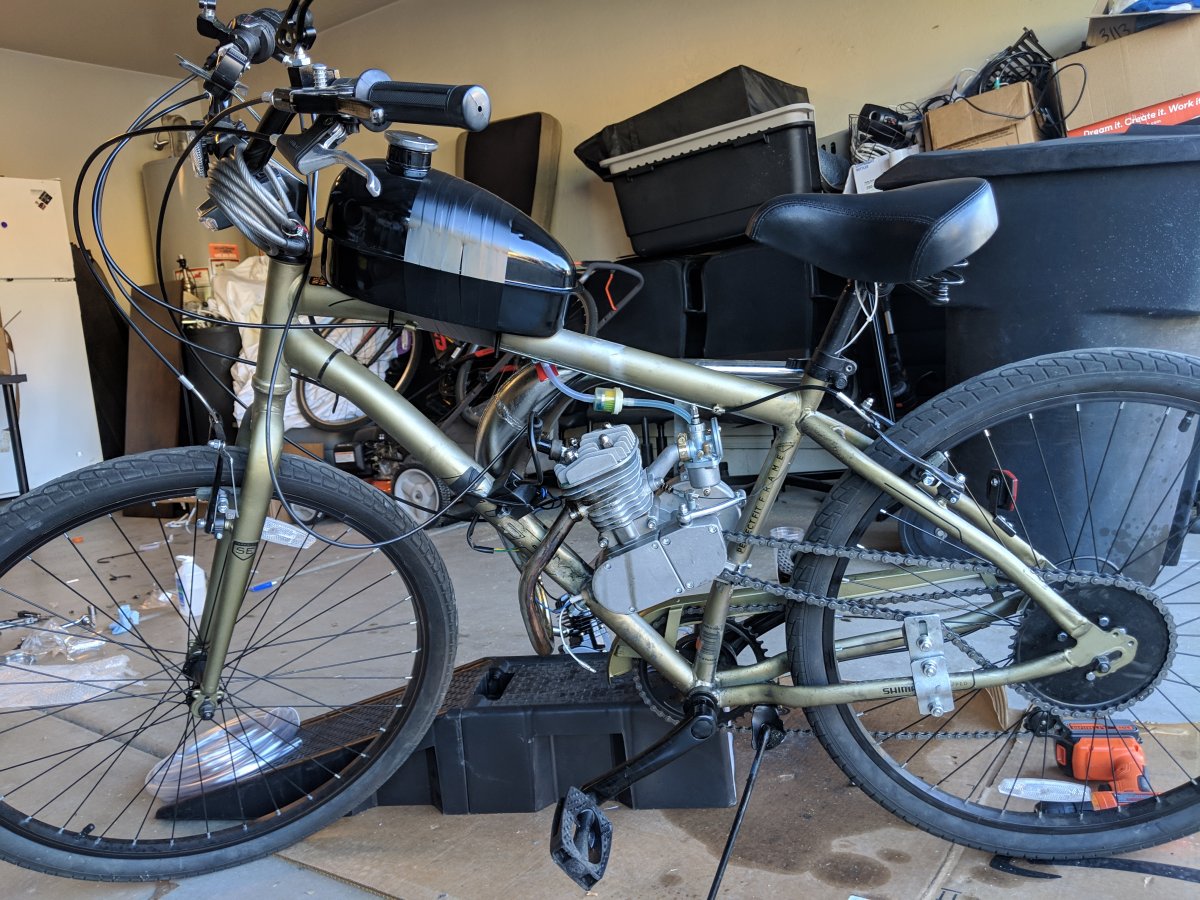 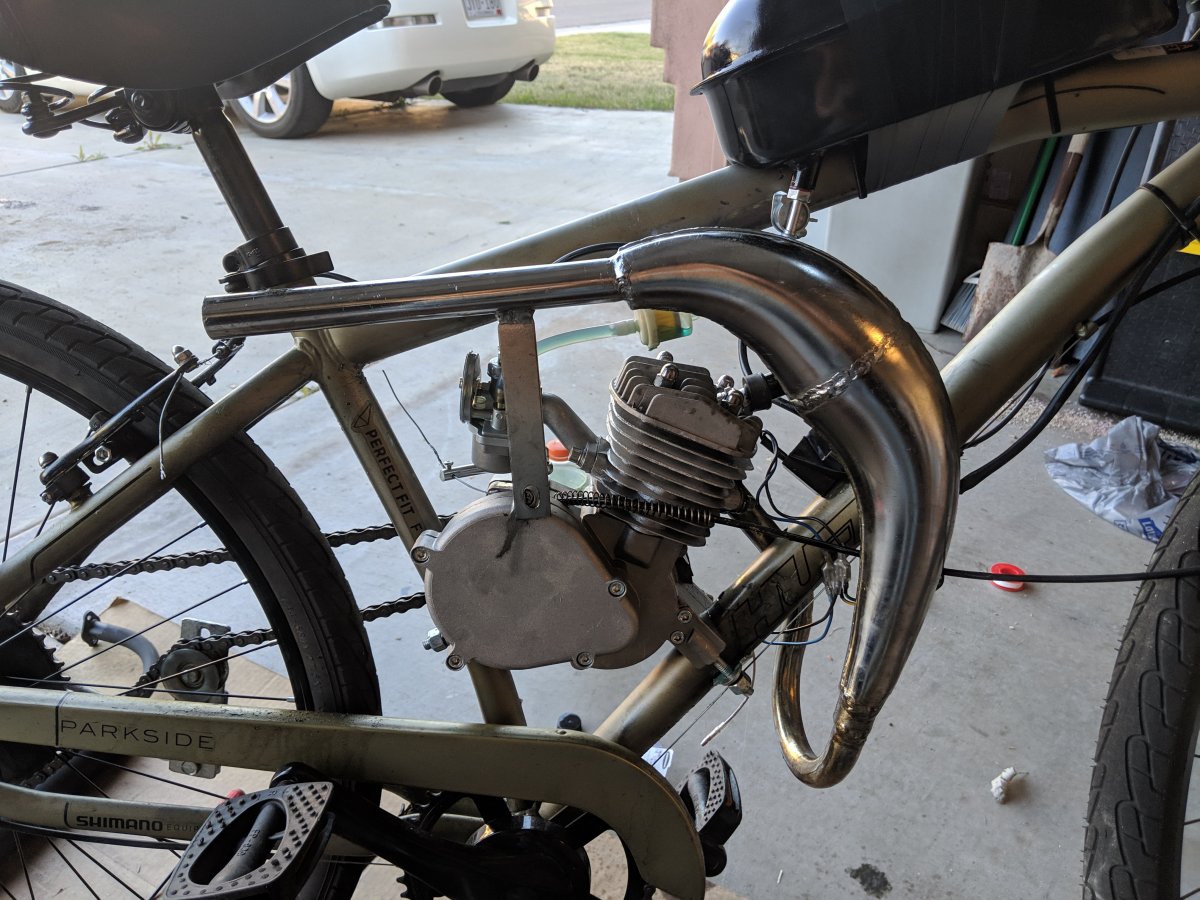 Throwing on the mz65 gave me my first (and thus far only) experience of what an expansion chamber should feel like when "it comes on the pipe". The difference was up there with simply swapping from the ebay junk to the zeda. At this point I became obsessed with trying to eek out more power where I could.

The next day, I blew out the head gasket. Had the motor 6 days and the pipe for 1. Thankfully that was an easy fix. 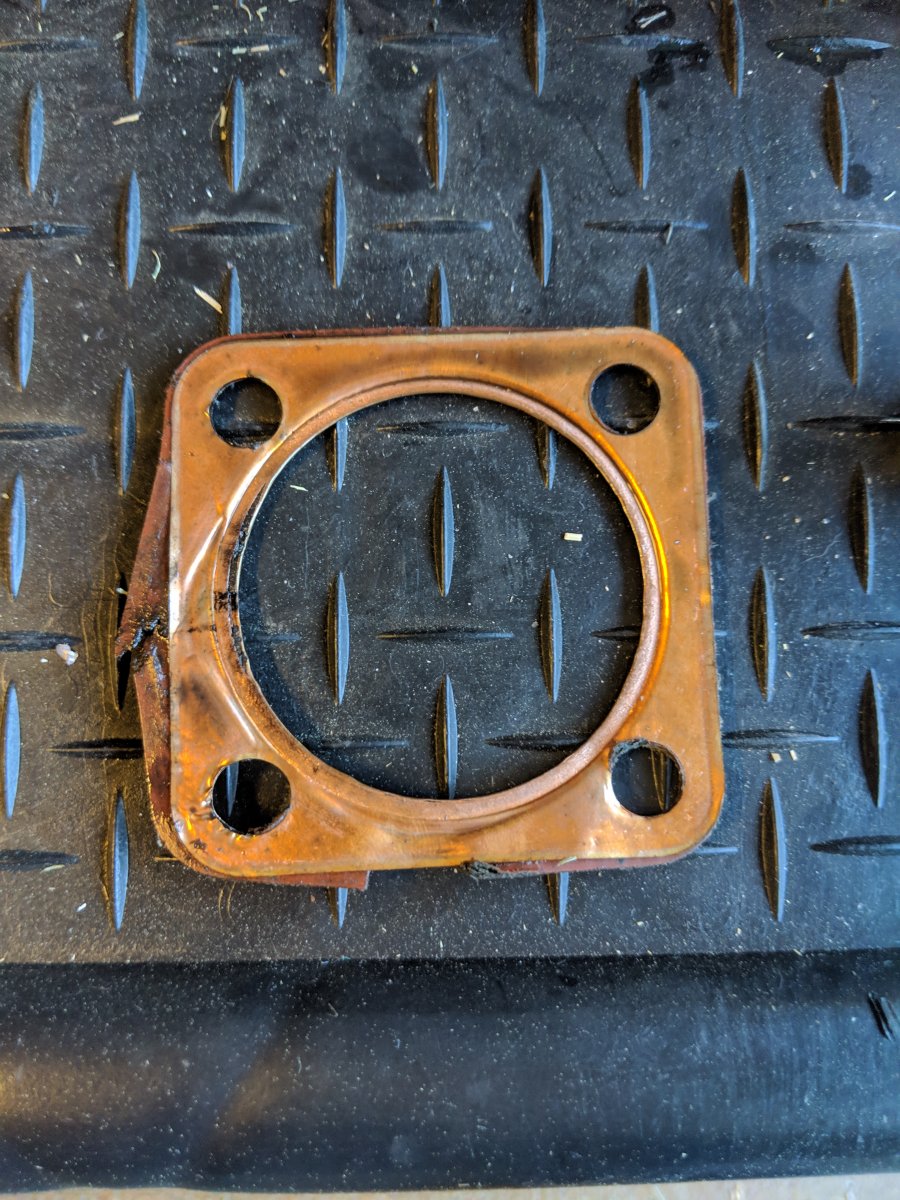 It only took me about a week and a half to discover the chrome stinger was just friction fit/expoxied to the main stubby stinger. With it removed the stinger was the perfect diameter to press fit into the flange on the cheap Amazon silencer. Being sick of my right ear constantly ringing, I quickly got the installed and everything was much quieter albeit a fair bit slower. 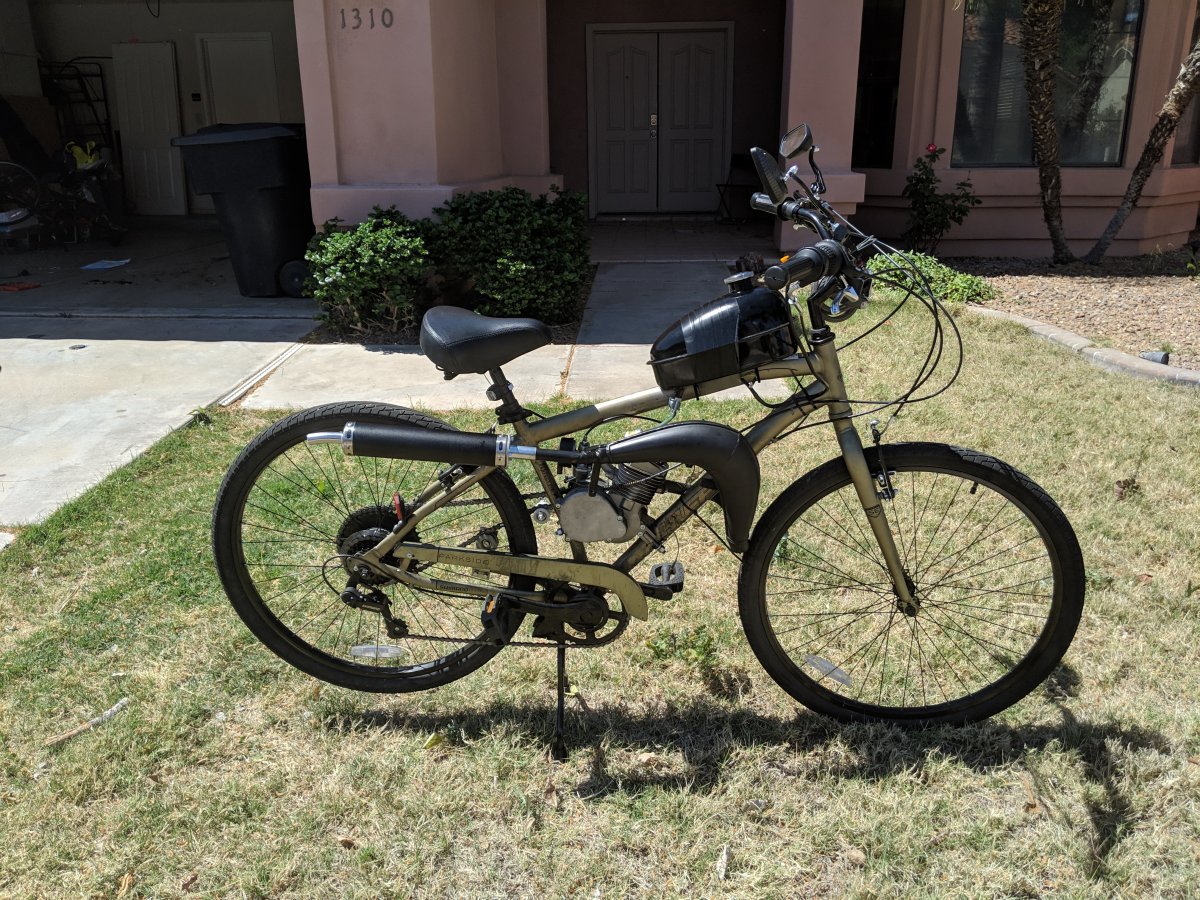 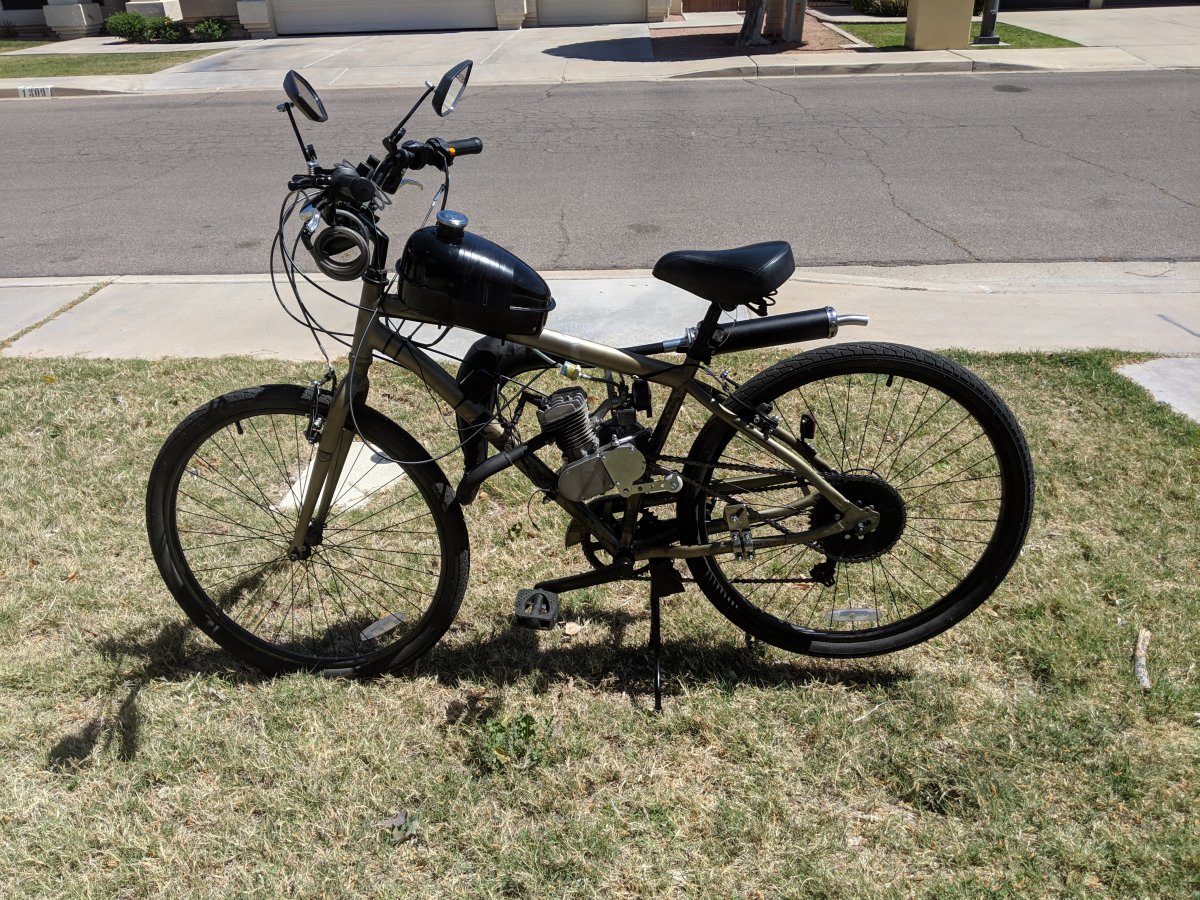 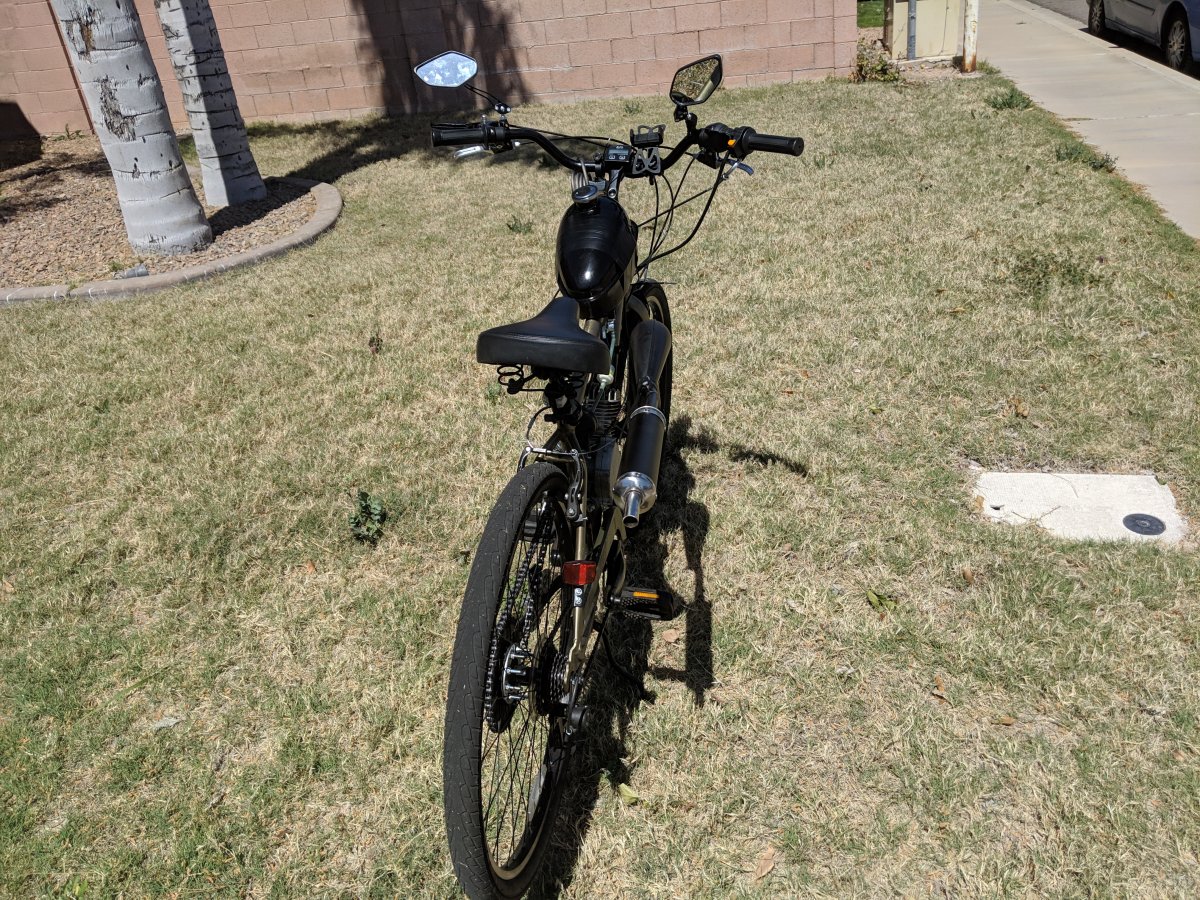 After a couple more weeks I got sick of battling sprocket alignment issues so I got a clamshell adapter which addressed all of that along with making installation far, far quicker. That was great until I accidentally did a high revving clutch dump which spun the adapter, bending/breaking spokes and trashing the wheel. Thankfully the local shop had cheap $35 wheels with a perfect sized hub for my adapter to fit. Around this time I also cut the silencer in half as it was a bit ostentatious. 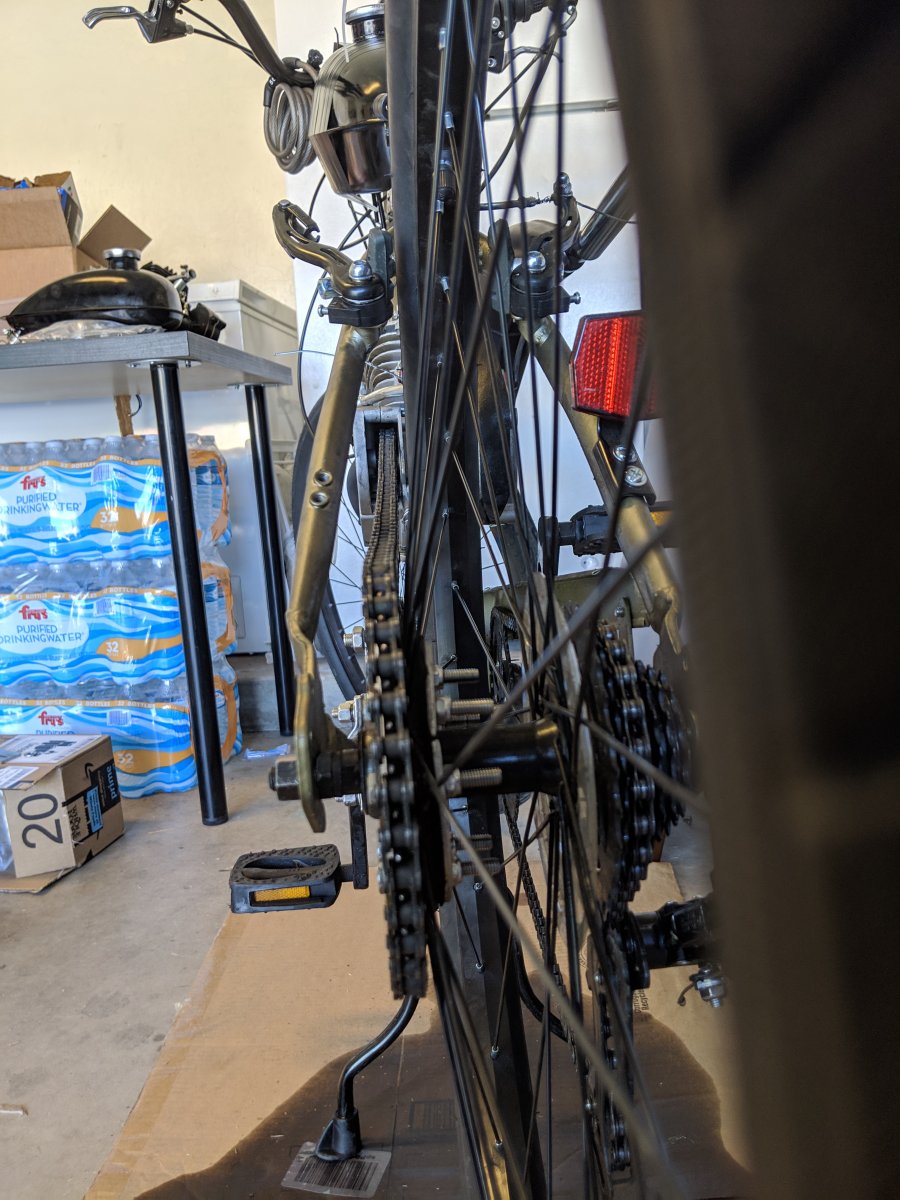 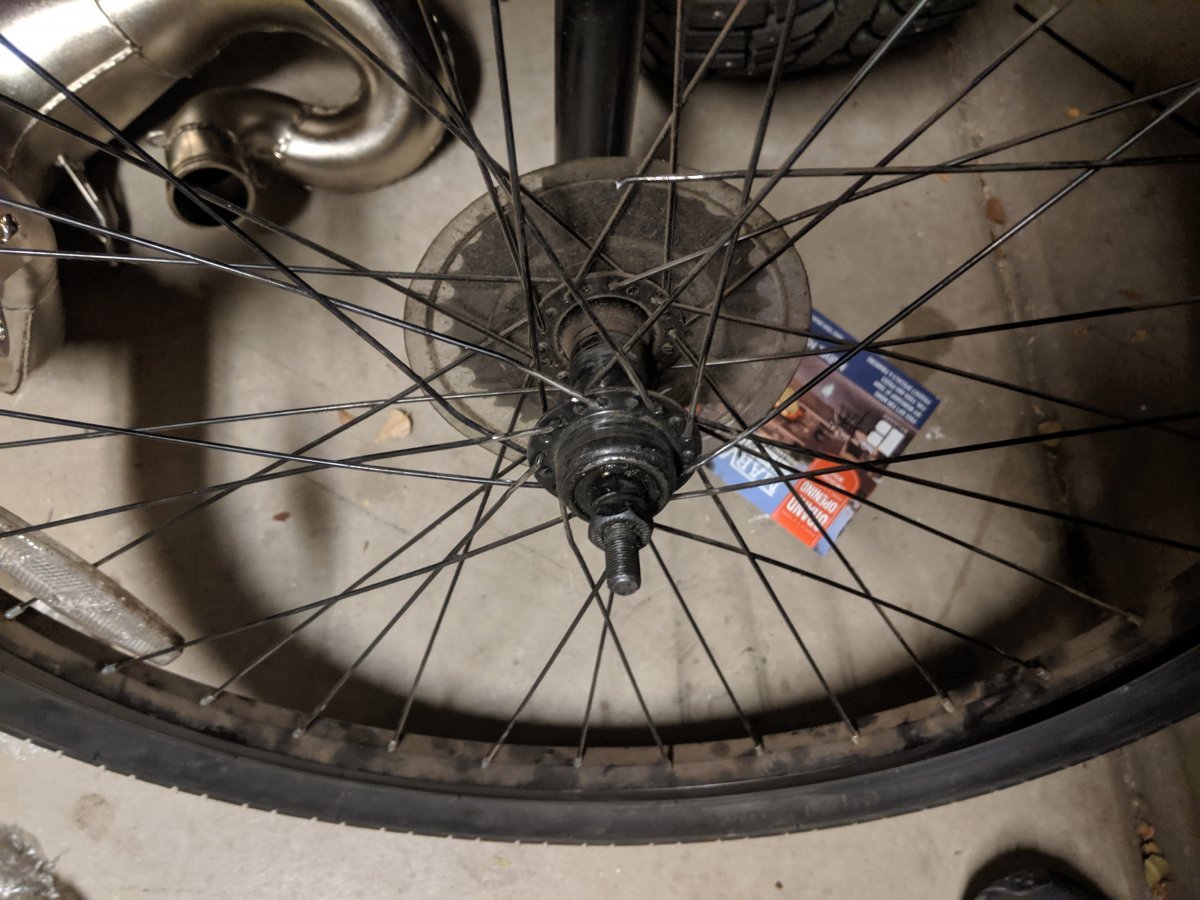 At this point I figured with the pipe and porting that the motor could really use a larger than stock carb and someone posted an ebay link on fb for a $20 19mm phbg clone that I couldn't resist. 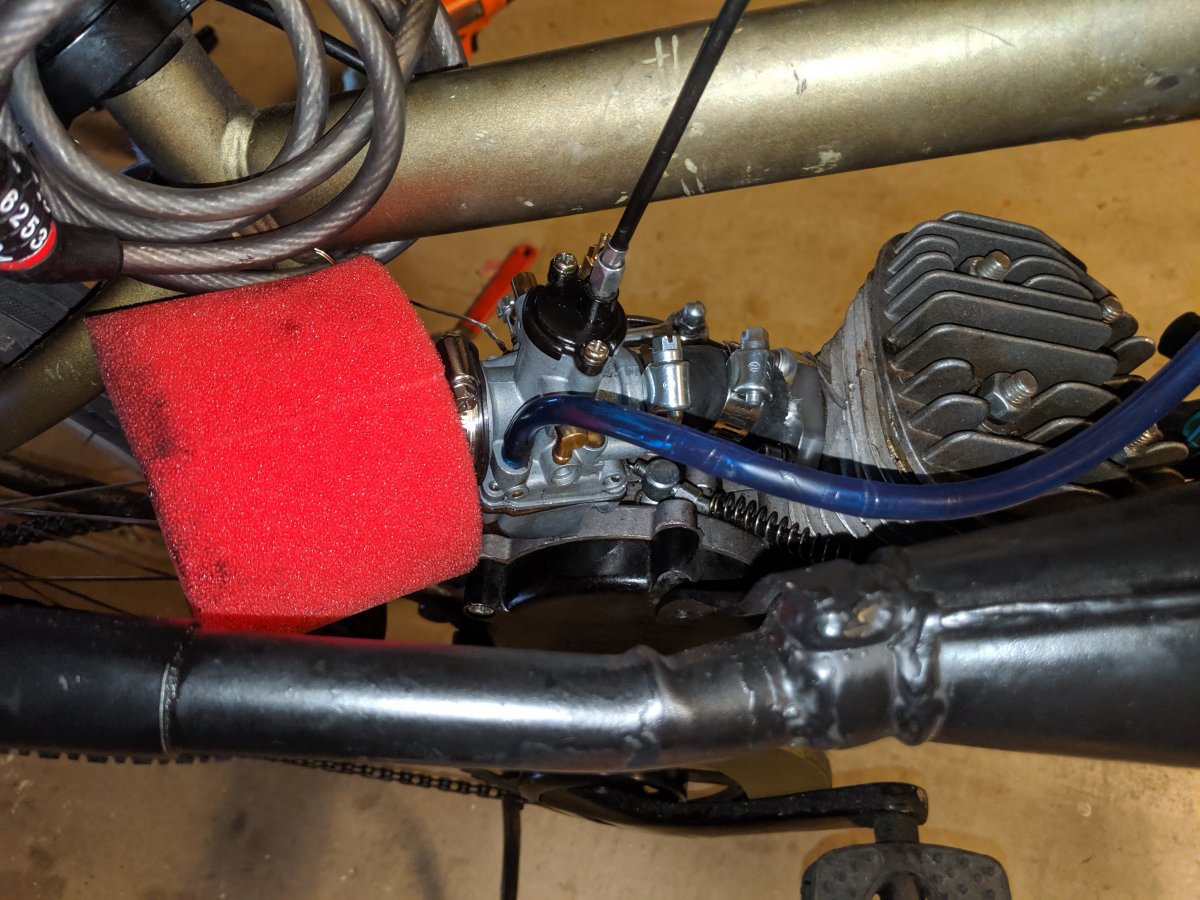 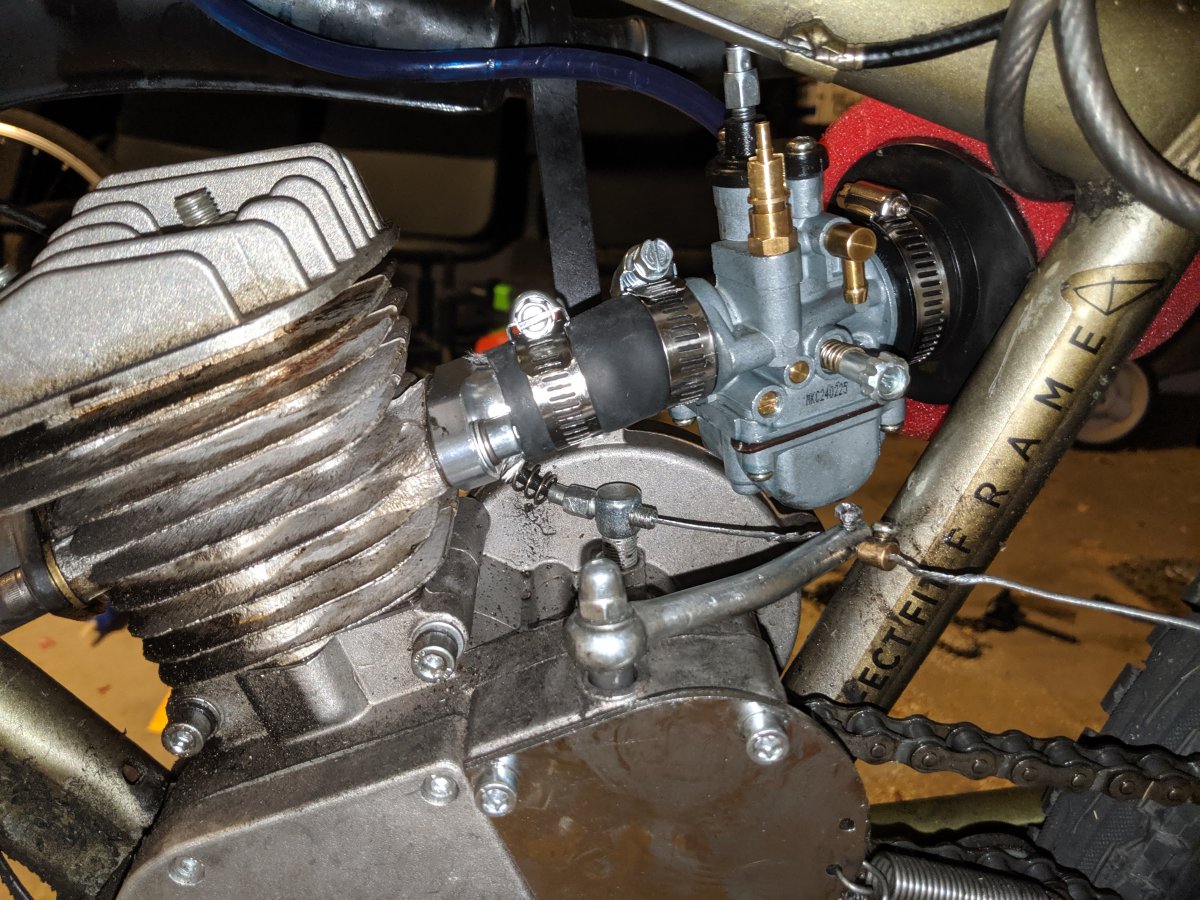 That one minor action lead to me spending the next month learning everyf***ingthing there is to know about how the hell PHBG carbs operate, from the simple stuff like the needle clip position to the more in-depth stuff like selecting which one of 11 needles will work best or figuring out the differences between a 2 and 4 stroke atomizer tube (and that despite being replaceable normally, that it wasn't on the clone. Just to get this in tune. So much frustration was had.

Long story short, this clone was a really cheap imitation that didn't share many parts with a factory phbg and was unable to be made to function properly. As China taketh, China also giveith and I found a seller on aliexpress that had a near perfect clone of a 21mm phbg racing (racing means bowl plug for quick main jet changes) with the desired 2 stroke atomizer tube for just $35. 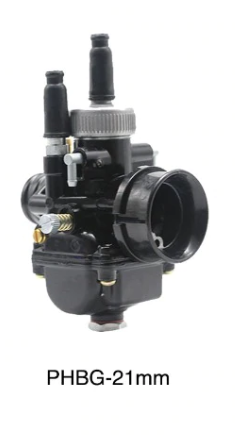 A smarter man would have simply coughed up the extra money for a Mikuni vm18 however I'm not one to forsake hard-earned knowledge and not utilize it. That and I already had a bunch of jets and needles for the phbg and was being cheap.

It took quite a few hours of trial-and-error to get the carburetor to a point where it's running mostly good. These dell'orto phbg carburetors can be a pain because you have a pilot jet, main jet, needle size/type, needle clip position to adjust/change out to get your bike running perfectly. The main jets can be had for really cheap however I discovered the dirt cheap ones are never the size they say they are. Sadly, for whatever reason, you cannot get pilot jets for very cheap nor does anyone sell them in multiple packs. Since I didn't want to spend near what I did on the carburetor on a few pilot jets I instead got a $5 set of micro drill bits, some solder, and drilled the jet to the size I needed. This worked, but I would have greatly preferred to simply just swap the jet.

Once the carburetor was tuned well enough I threw on a CDH CNC head give the motor better cooling in the hot Arizona summer heat. 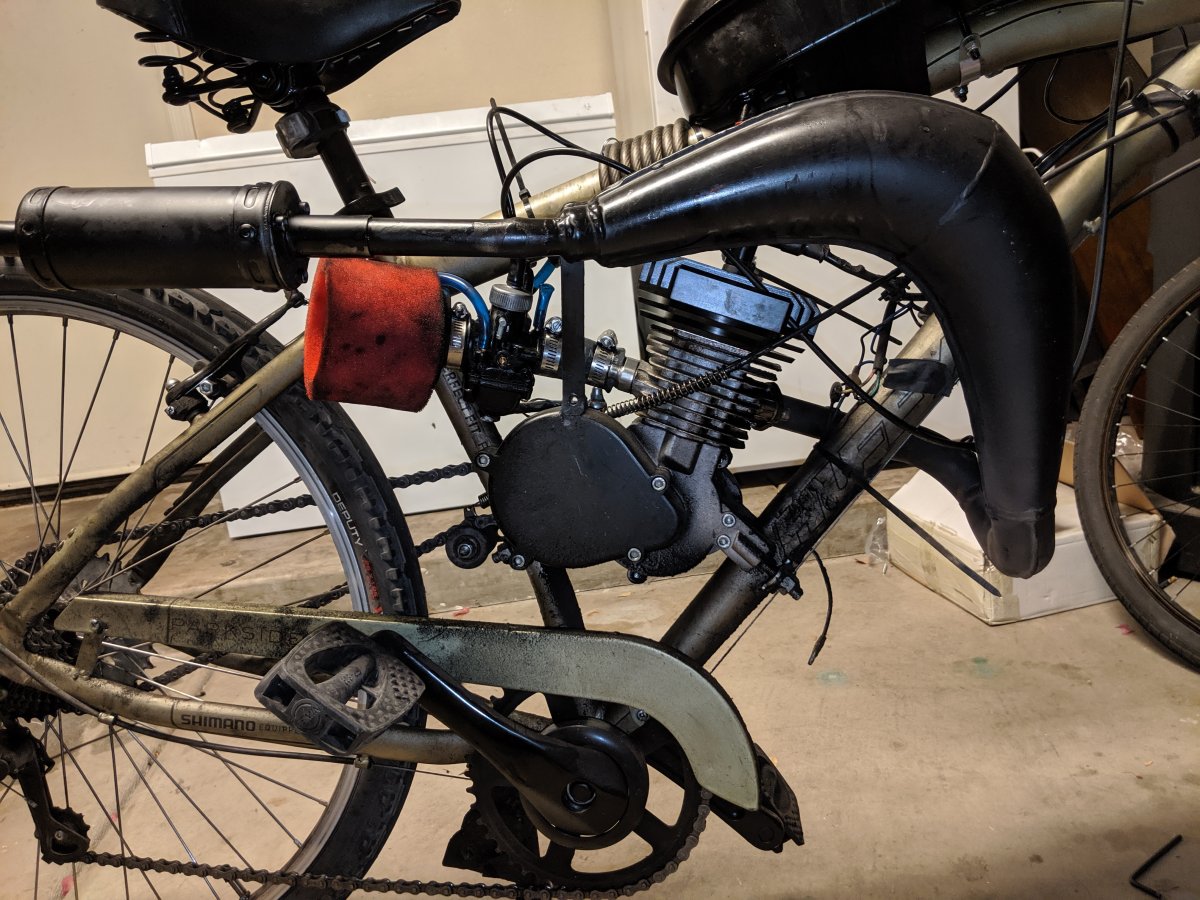 All was perfect... Until the piston ring got caught in a transfer port at 7500 rpm, trashing the piston and damaging the cylinder. 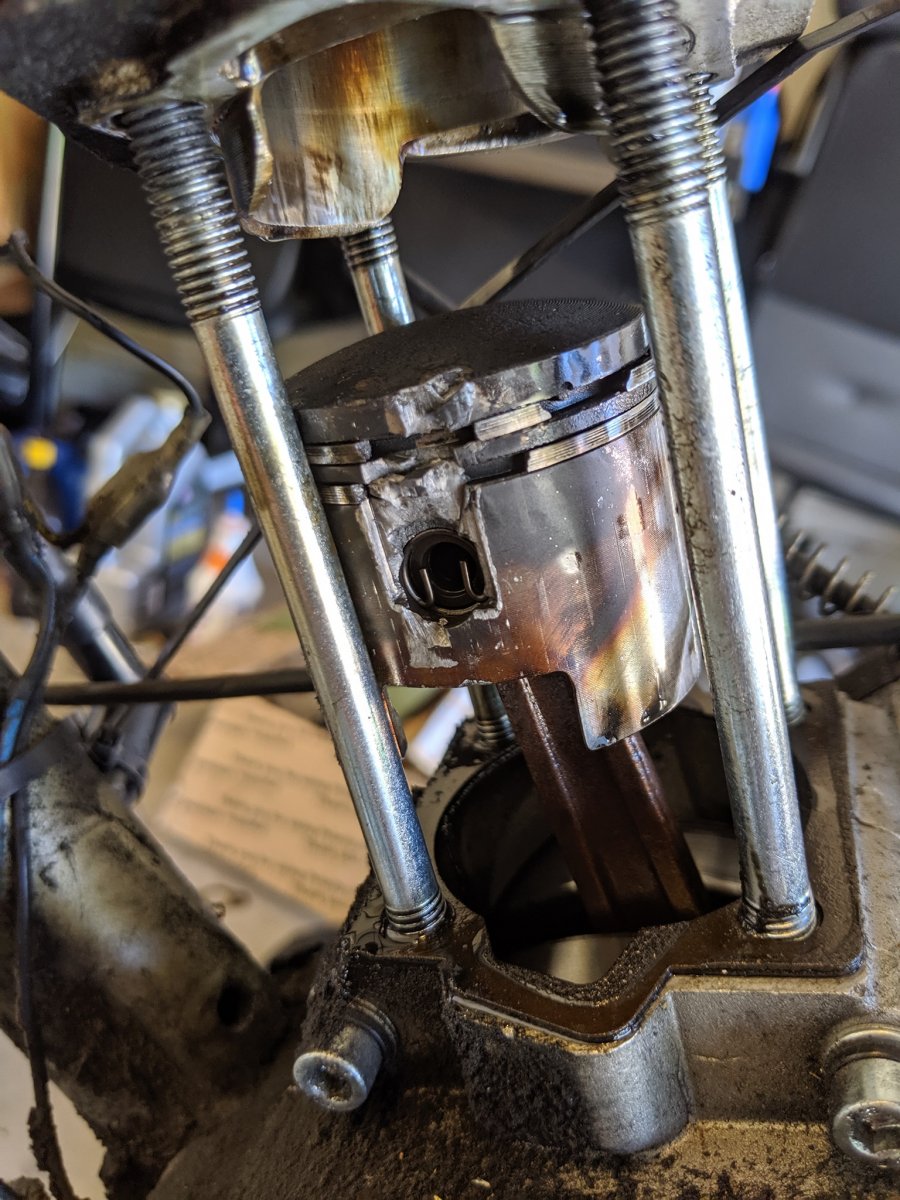 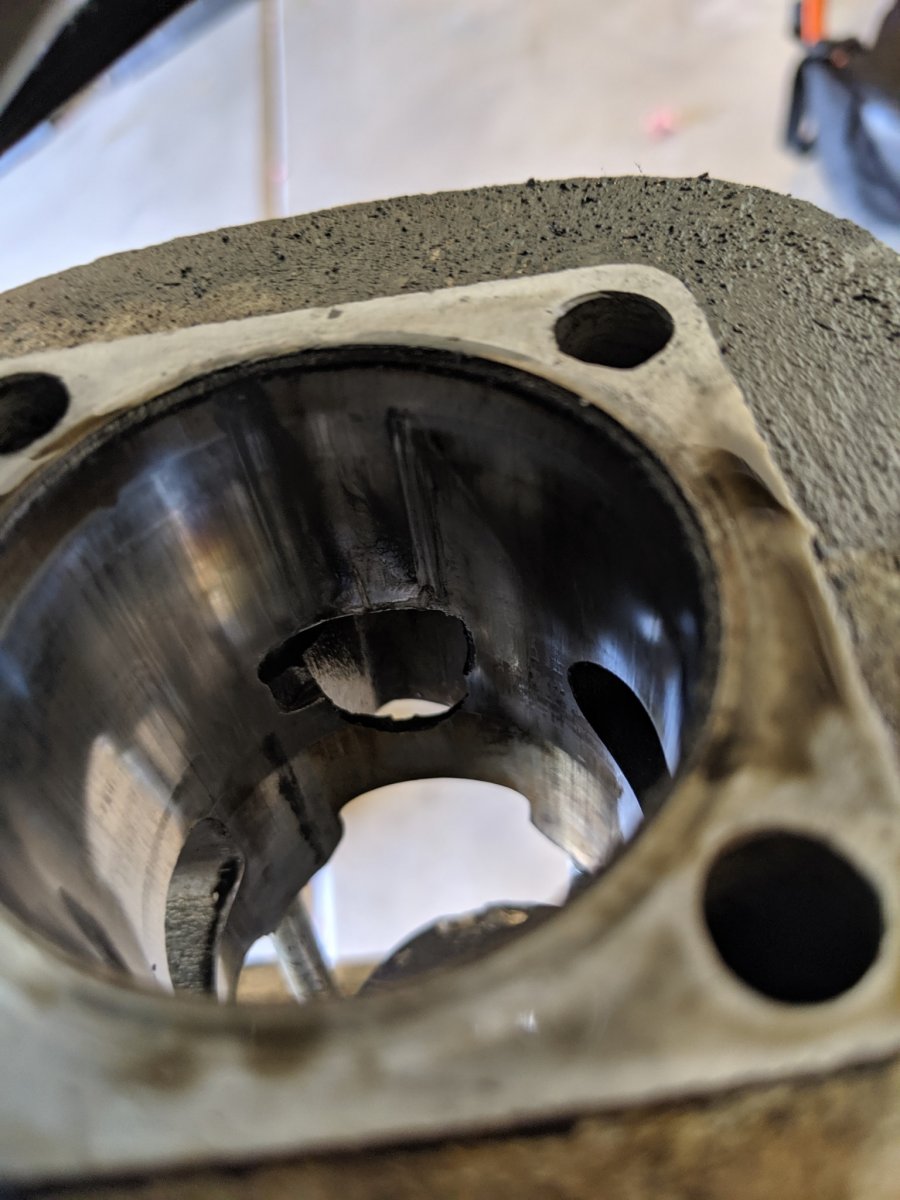 Again, as China taketh, China also giveiths and I was able to repair this for the cost of a new piston and the time to do a full tear down/internal cleaning along with some sanding of the edges of the blown-out transfer port.

Once it was back on the road I dealt with almost being hit by various inattentive people several times in just a week so I decided to install some literal car horns onto my bike which would have the intended side effect of requiring a fairly beefy power source that I could also use for lighting. I quickly rigged up my first iteration using a cheap cargo rack, a small 12 SLA battery, and a pair of chrome harbor freight horns. This was ugly but it worked quite well which was all that counted. 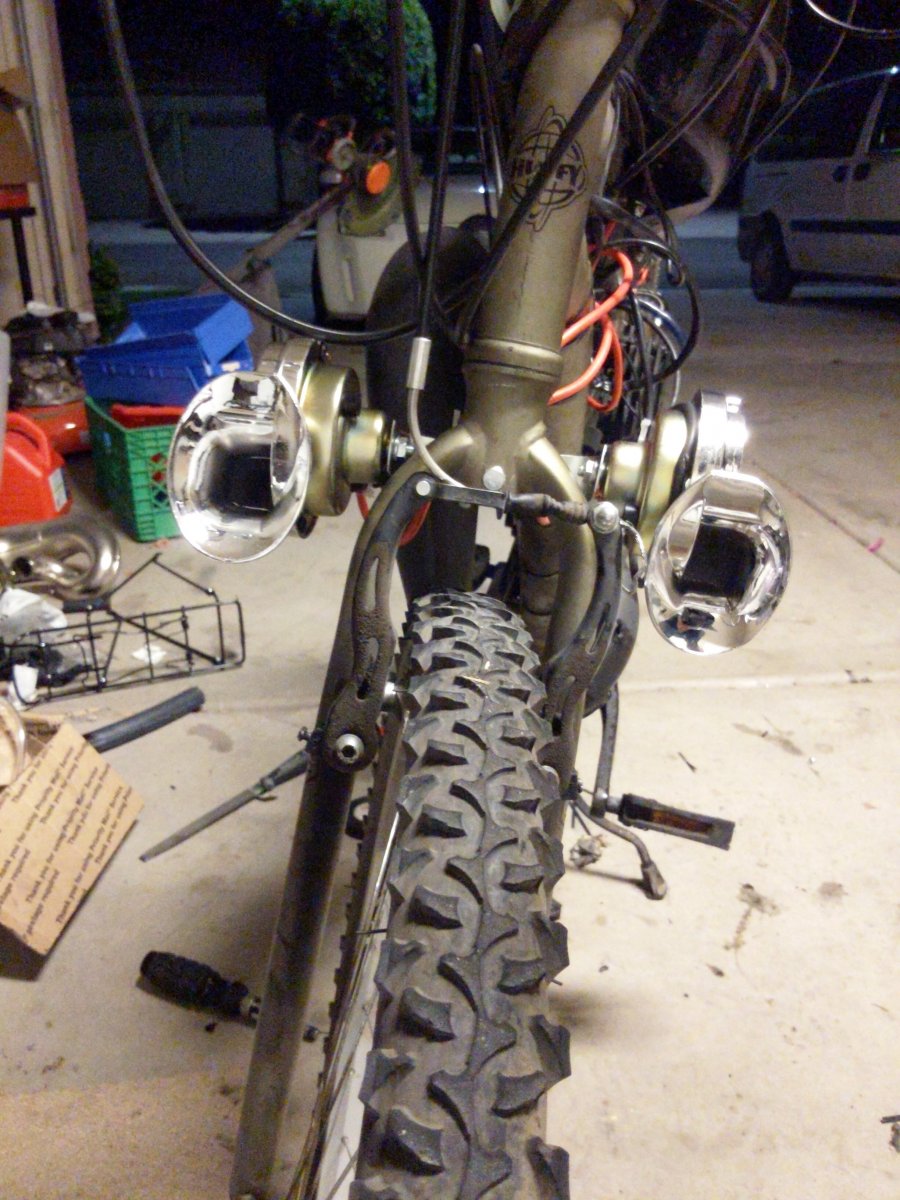 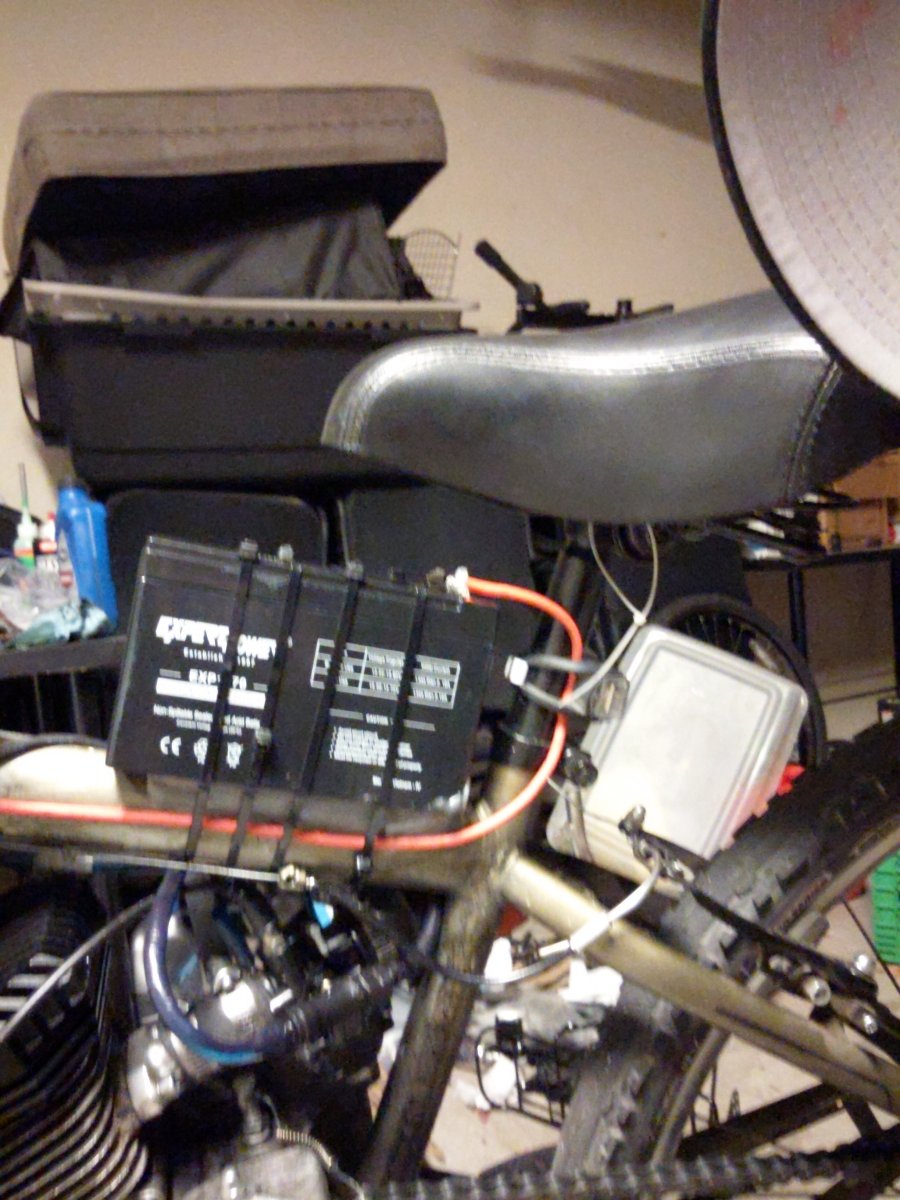 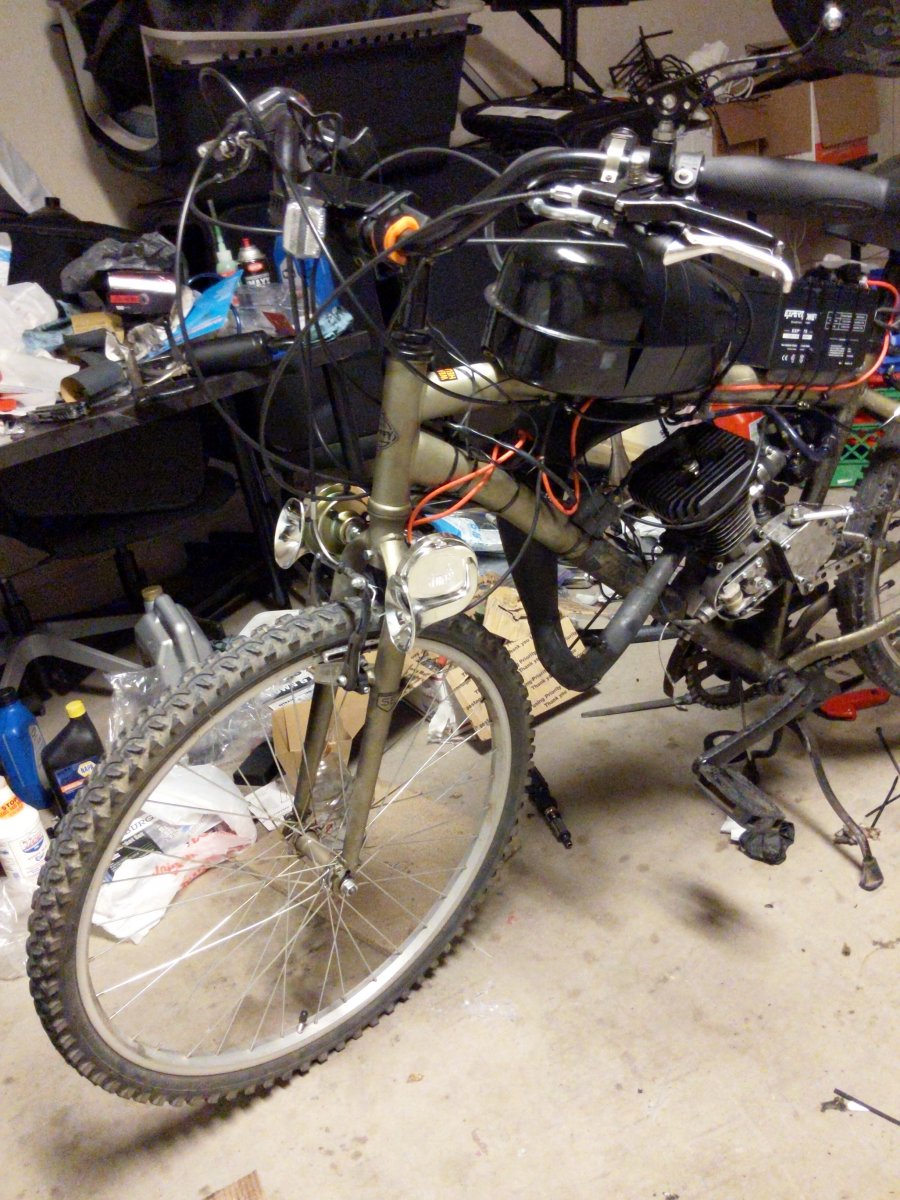 Maybe two weeks went by before the "work on the bike" bug bit hard again and I decided that instead of a standard seating position that I wanted to sit far lower and further back. Unfortunately, this meant the rack had to go but it was essential for carrying my battery and 5lb U lock, so I relocated it to the front wheel. This worked perfectly, at least in theory, but in reality, it was less than ideal. Namely, the sheer amount of weight with the battery and U lock would cause the bike to tip over of the handlebars turned at all which due to the weight was a constant nuisance. 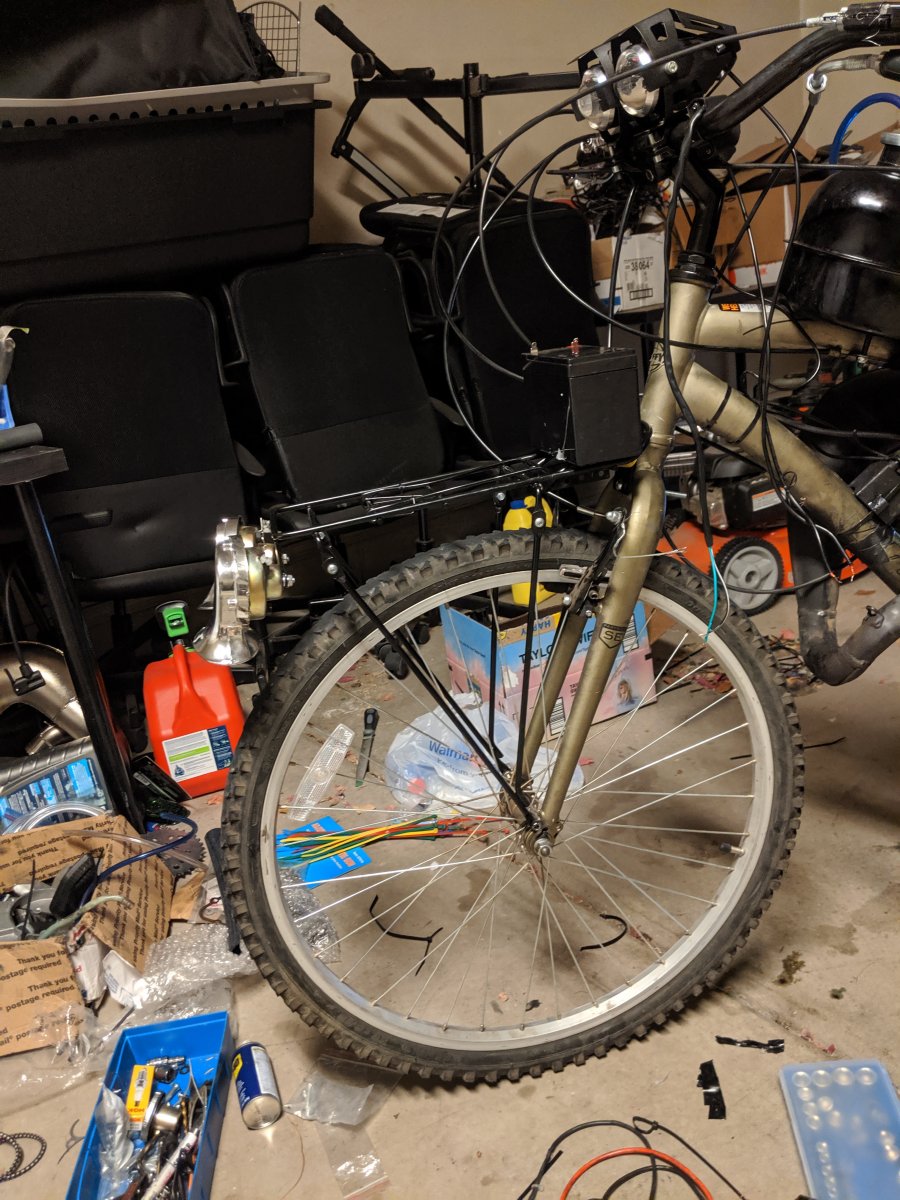 It took a couple of attempts and a few hours of trial and error but I ended up cutting off the rear 5in where the "front" center support mounts along with 2 of the 4 support arm tabs to use as the base support for the battery. Then I used some thermoform plastic putty (turns into basically silly putty when put in near boiling water and turns back into a strong, rock hard plastic when cooled) to create a battery box that also had enough room for a horn and blinker relay. Once the box was made and cooled I figured out where I wanted it on the rack, used a butane torch to carefully remelt the bottom and pressed it into place, ensuring to have the plastic fully connect around the bars. To reduce the stress on the mounting hardware due to the terrible mounting geometry, I made and attached a strap from the battery box around the fork. As a final touch I hit it all with some black spray paint. Using some of the extra hardware from the rack I was easily able to hang the horns from the underside of the rack. 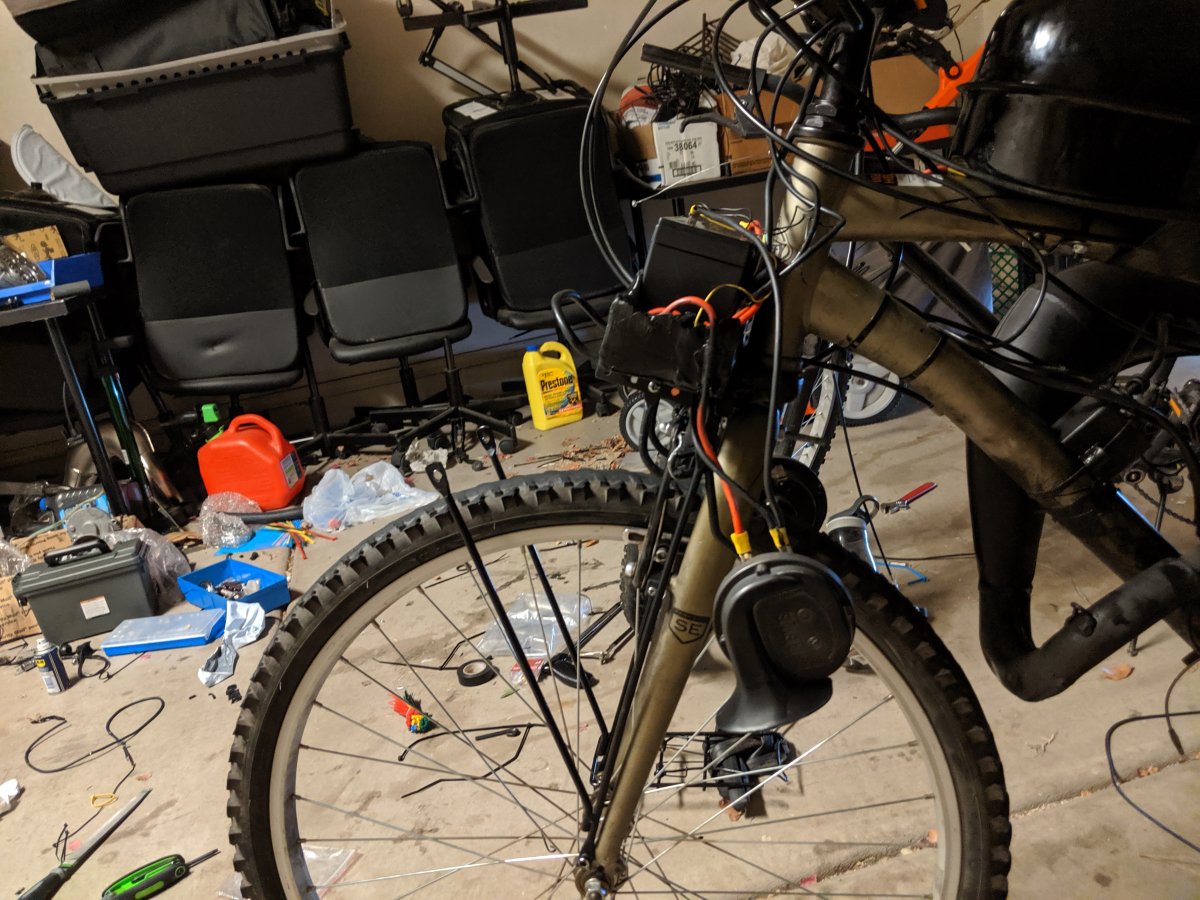 With that sorted out, I needed some way to easily and conveniently mount my bike lock which was a challenge with all of the crap bolted onto the bike already. After eyeing several locations I stumbled upon hanging it just infront of the gas tank, high enough that it wouldn't interfere with the tire or exhaust header. So I melted some more of the plastic and made a holder that the lock body snaps into firmly, essentially made an unmovable base directly on the bike and put them together once everything was set. It holds the lock very well, even through sharp turns at high speeds or high-speed bumps. 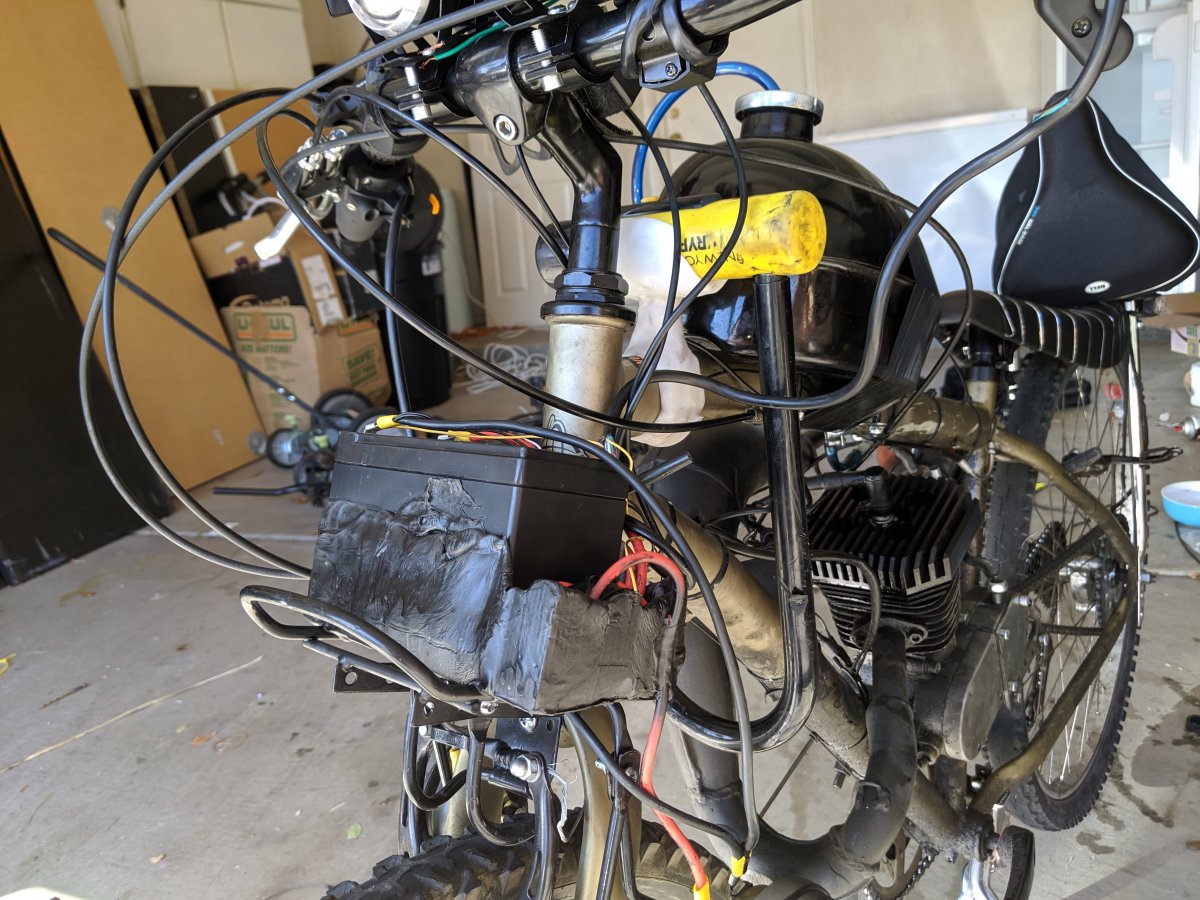 Finally, I installed the banana seat and sissy bars to give me the desired ride height. However, I didn't factor for where the pedals are and I need to move the seat back another 5-8 inches with an extended seatpost and get some short ape hangers for maximum comfort. 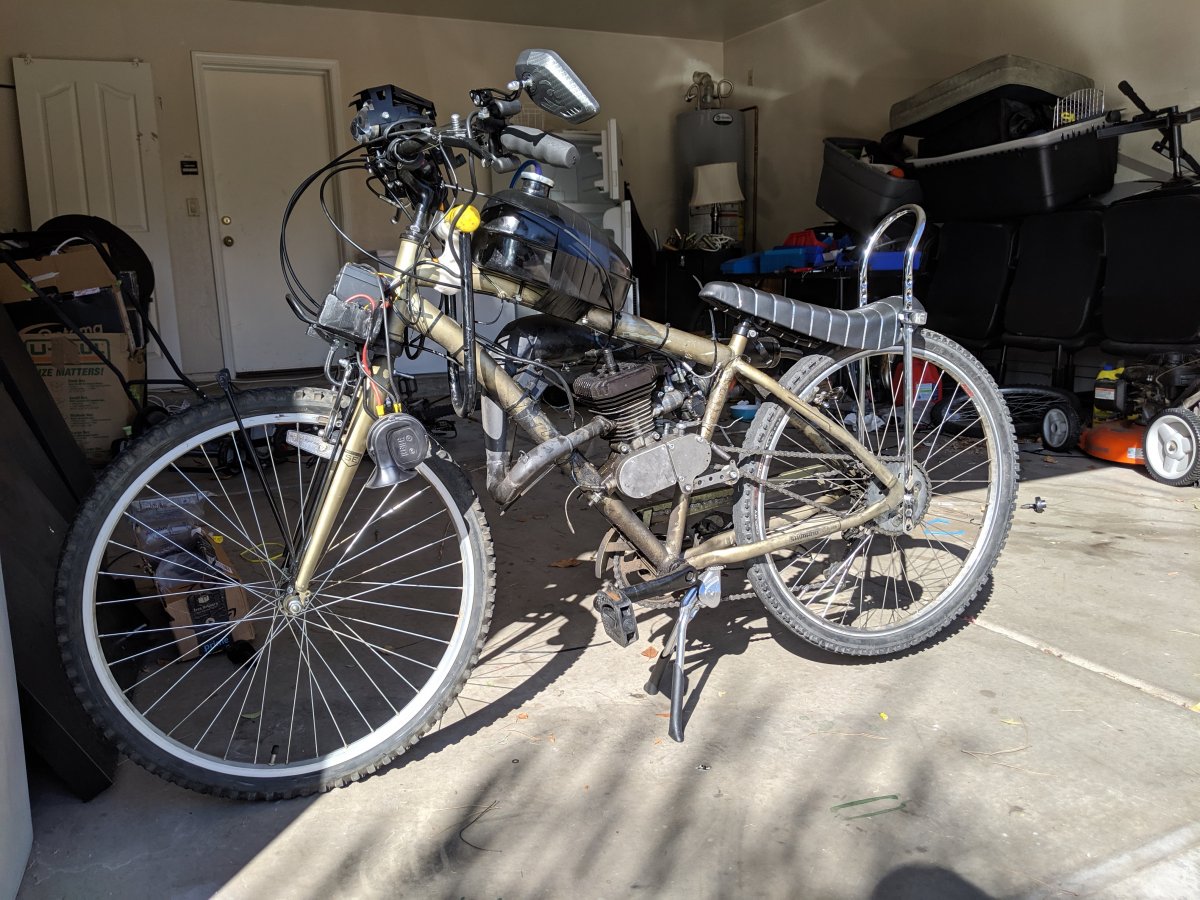 Next on my list is taking one of my extra seat posts, cutting a 45-75 degree wedge out of it and bending it back so I can have the seat in a better position. Once I have the seat's position finalized I'll be modifying the sissy bar to mount using the shocks from a mountain bike's fork to give the seat a good amount of impact absorption. All it'll take is cutting the shocks from the fork, cutting the top tube down to about 1 in above the shock body (when its fully compressed), cutting the 1-1.5ft of the sissy bar off, sliding the bar ends into the shocks and filling the space between the bar/shock with epoxy. 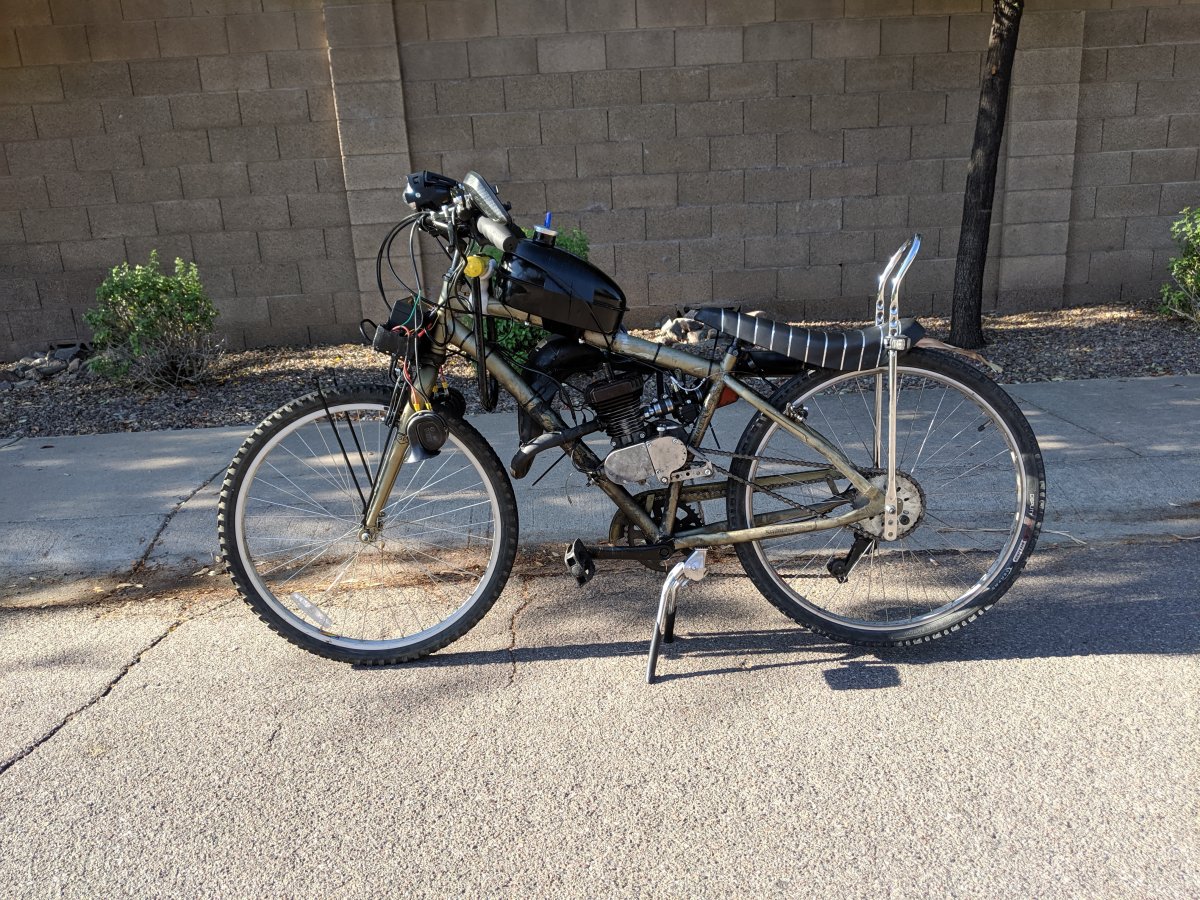 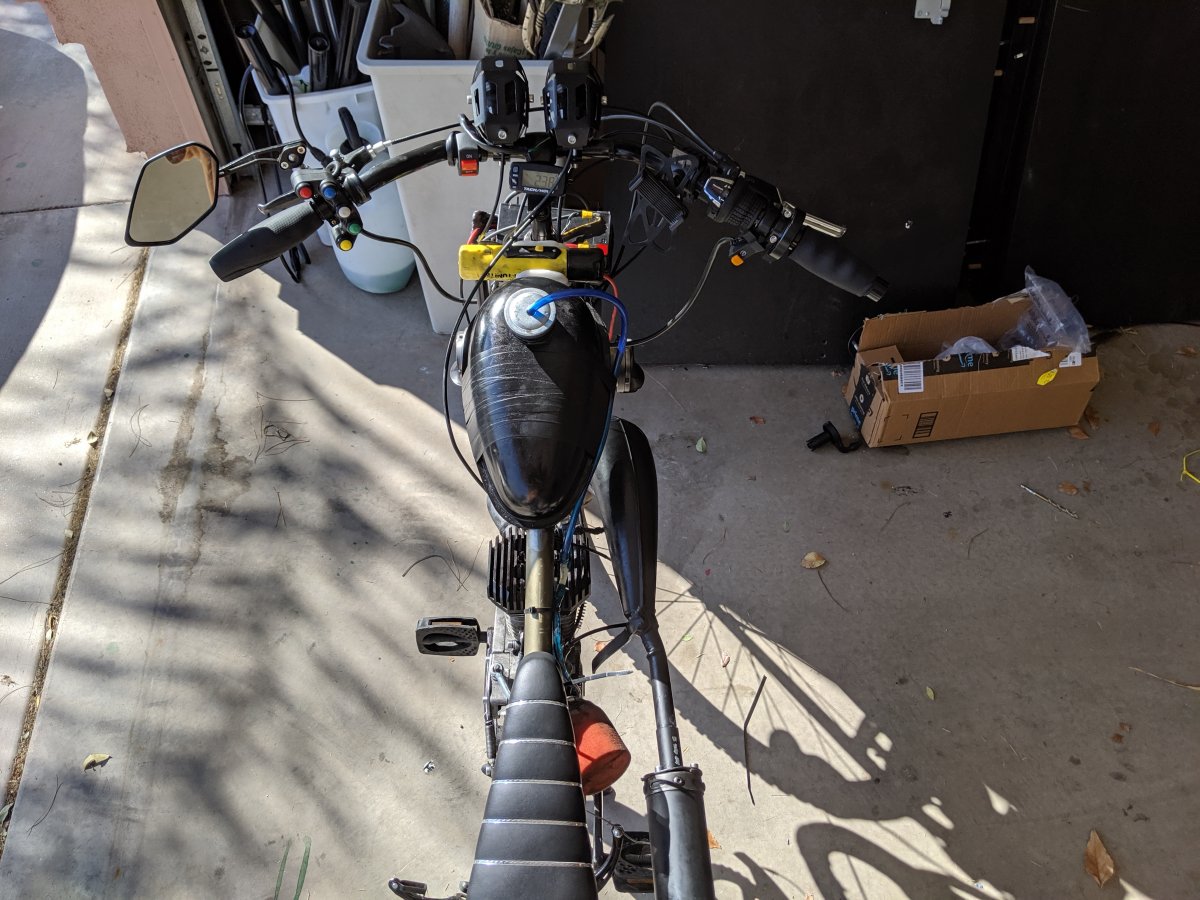 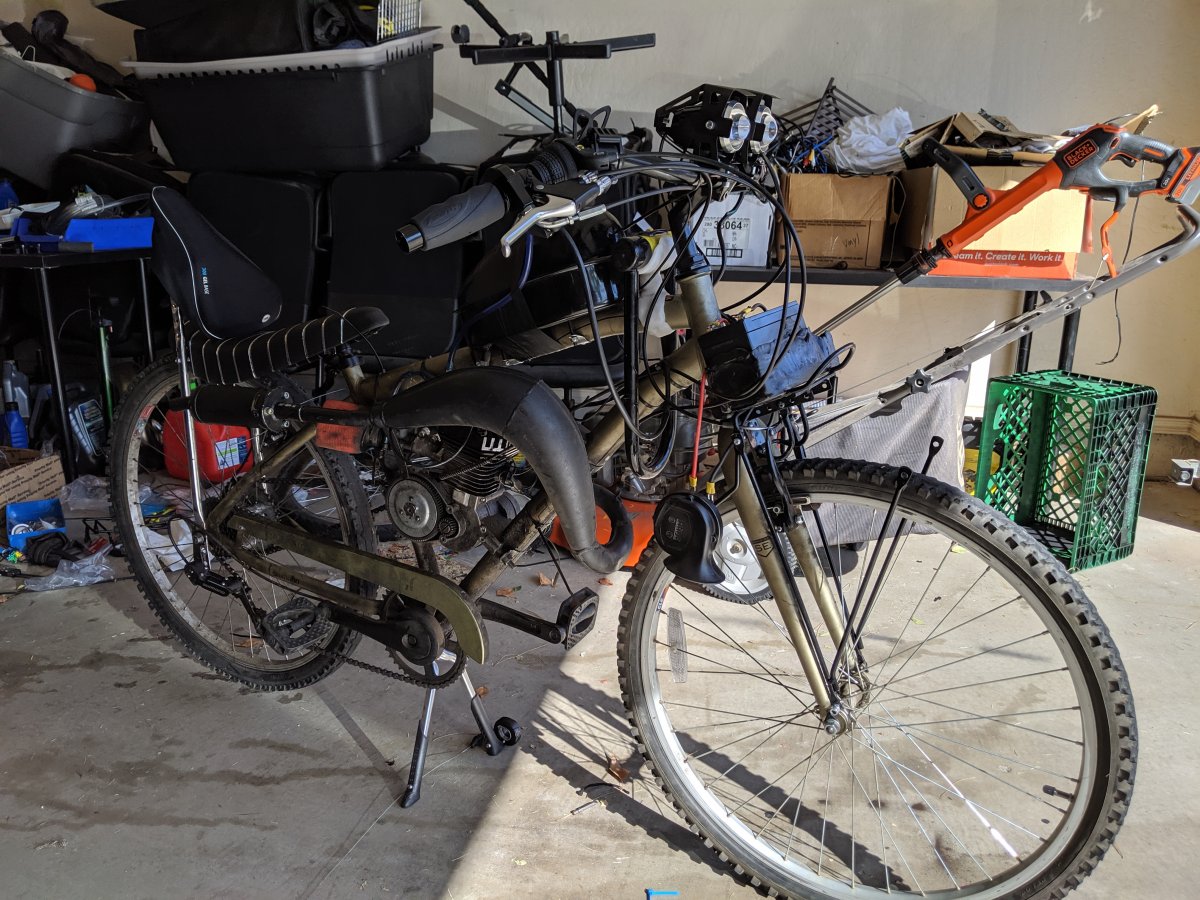 It took a little bit of fiddling but now the sea is further back and the sissy bars are now full suspension with about 2.5in of travel. Unfortunately when I was drilling the second shock I slipped and stabbed the drill bit about three-quarters of the way through my hand. I still finished up and all I got to do now is reattach the derailleur. I might have overshot the seatpost length quite a bit but I have several laying around so I can try again. The clear/whiteish dot on the drill bit is how deep it went, that's fat. 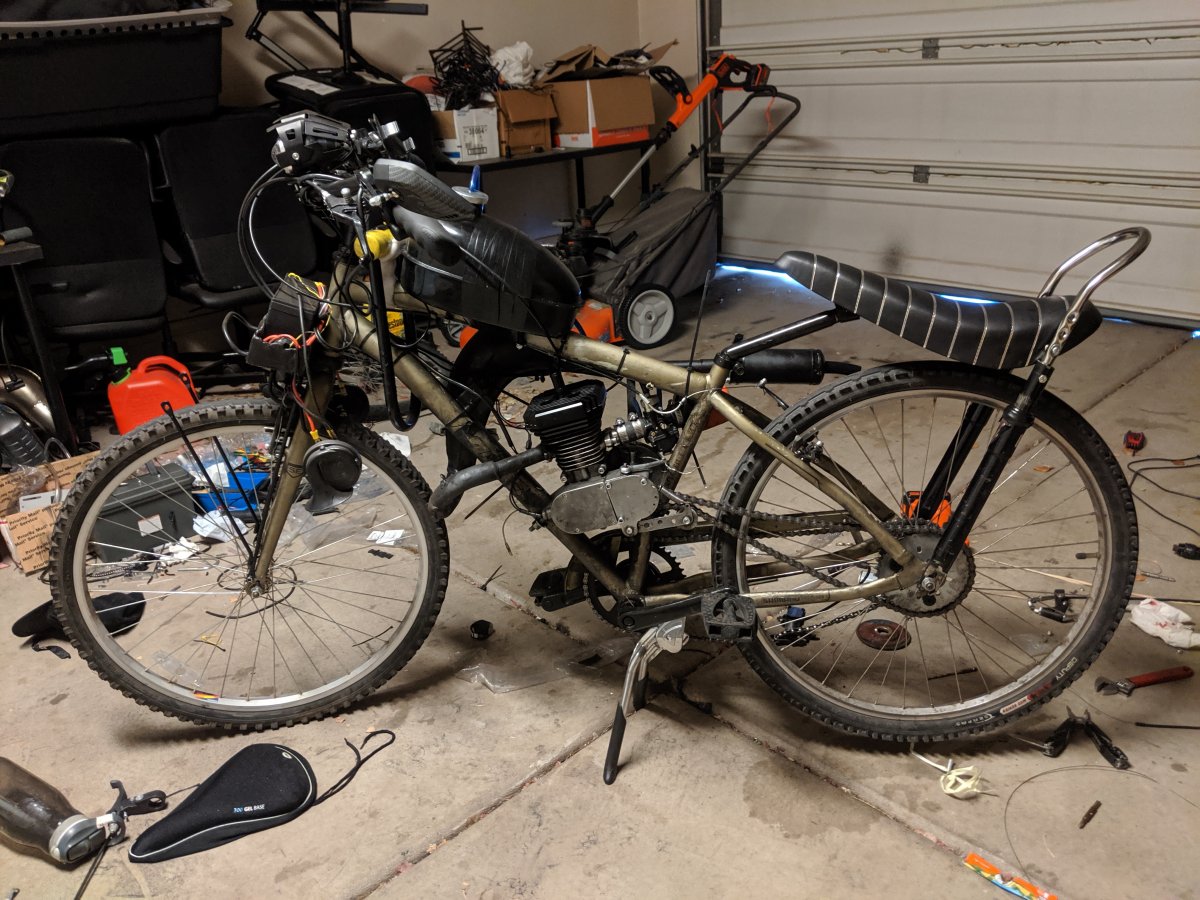 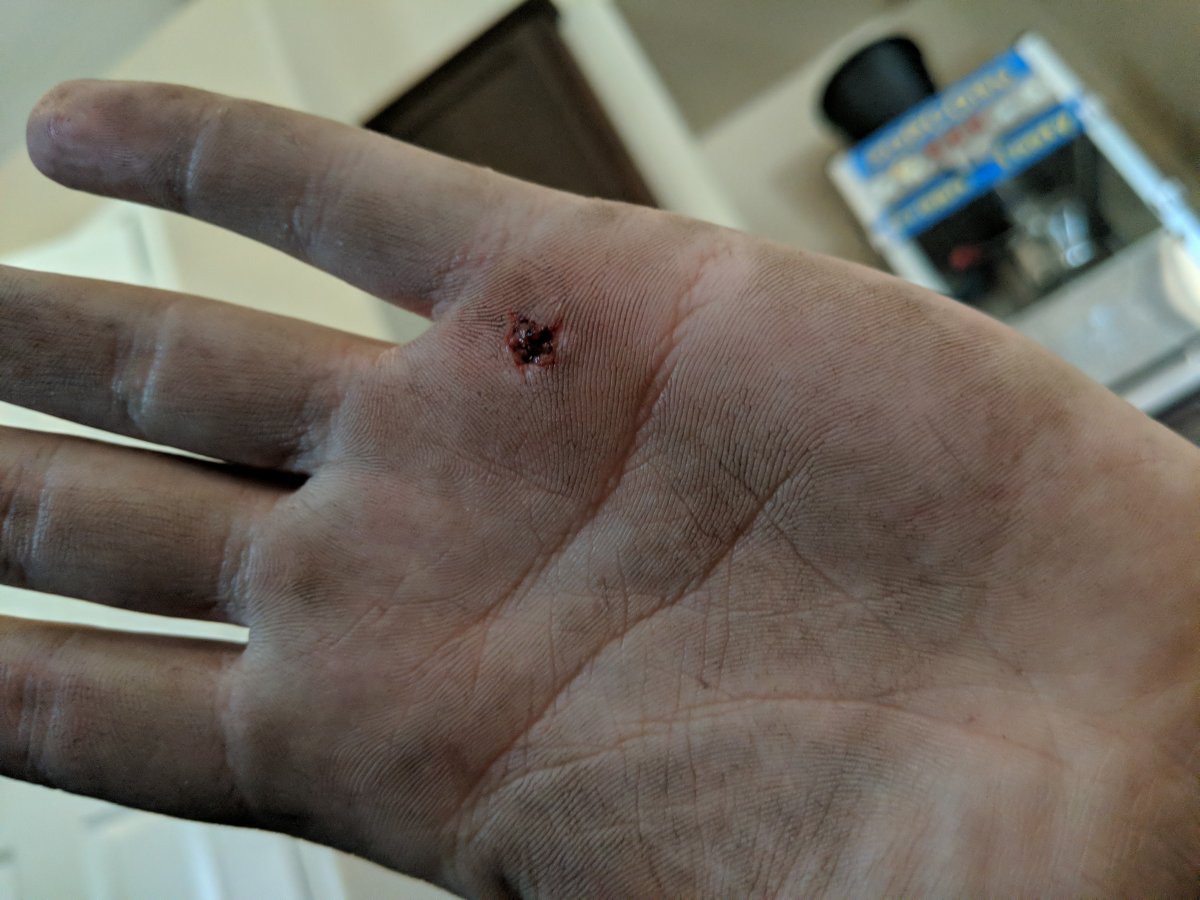 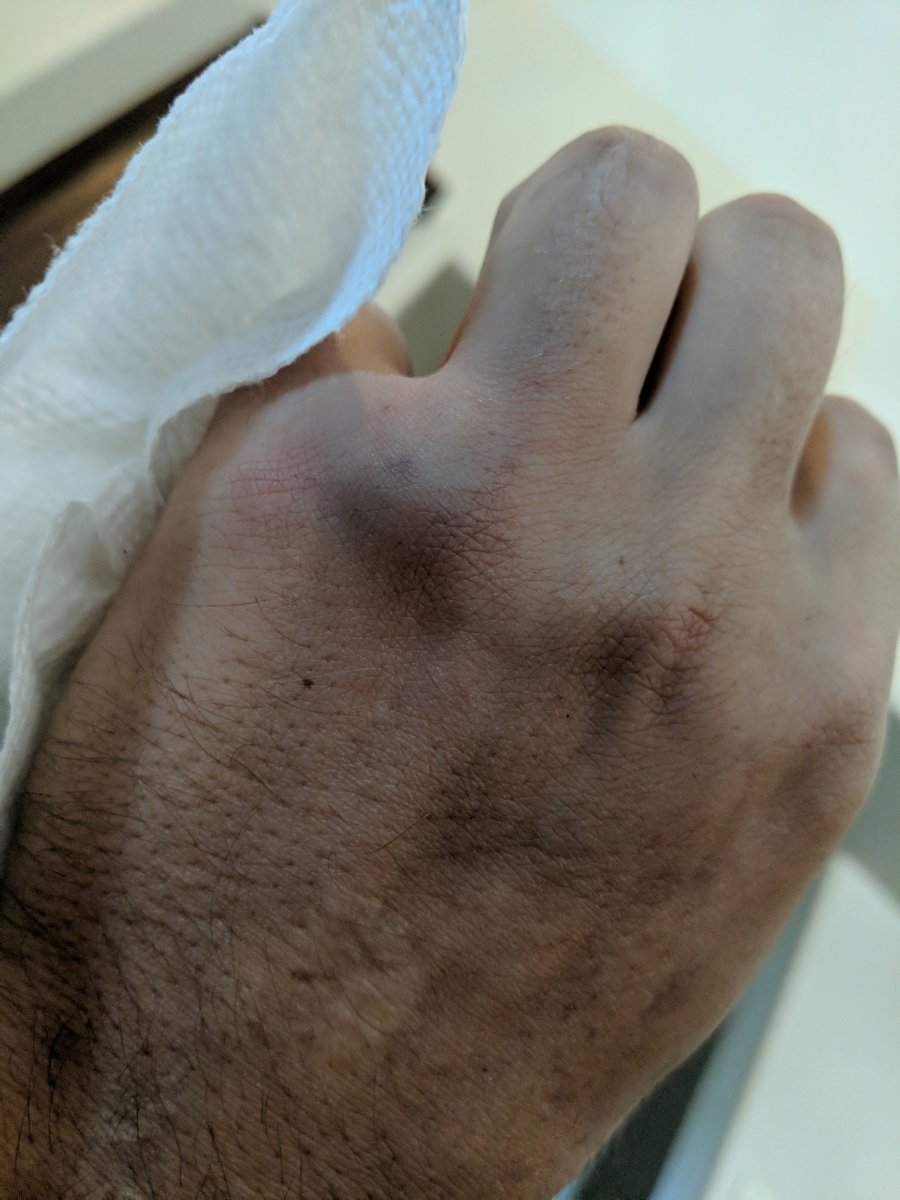 EDIT: Yeah that seat is wayyy too far back, completely unrideable. Good thing I have 2 more seat posts! Also I never considered the amount of weight front shocks are expected to handle, they are a touch on the weak side for even a 180lb rider. I have another bike to use for parts that has a suspension fork, might have to see if that has stronger shocks.
Last edited: Aug 16, 2019