warning: these 2 pics are incorrect, see below.

I found this picture from grubee's website.
I'm confused with the picture.
Do i have to put the siver washer on the top of the black ring or under the black ring???
If i put it under black ring like the picture above is showing, the needle will not go back to it's position when you release the throttle.
I think the picture here is wrong. anyone else think so?
G

welcome to the board, kavid2007

1 - needle/c-clip in bottom of slide

so the picture that grubee has is wrong.
thanks for the info augi
G

a correct pic (from dax's site) 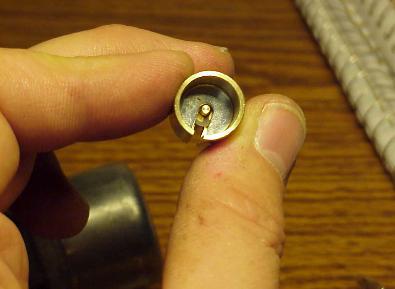 What can happen when you get them clips wrong

I rec'd my carb with the clips reversed or as shown in the original 2 pictures. Everything ran fine but it was choking at higher rpms which equated to 27 mph. After about 150 miles on the engine it began to run even rougher at higher RPMS. I began a quest to solve this issue. I replaced the spark wire, the sparkplug, tried sealing the intake manifold, cleaned the carburator etc. Apparently at some point I had removed the carburator slide and needle assembly and had re-assembled it correctly as is shown in the later photograph with the large c washer on top of the needle assembly. This was the root of my problem. This had effectively lowered my needle and was making the engine run too lean at the higher rpms. After about 3 carburator disassemblies I lowered my clip to the next to the bottom setting and suddenly my bike was no longer limited to 20 mph now I can do 30 mph. So this minor setting change increased top speed by 50%. I was also forced to re-adjust the idle setting screw to give it a better idle and better low end acceleration. Now the vibration of the higher rpms are making by buns tingle.....and not in a good manner like a pretty girl might.

WTF??!?!??! OM freaking G... I've got almost 1000 miles on my motor yet I had the needle assembled the wrong way! ****. I put it together the way the instructions with the kit told me to. I hate it when the mfr's screw up like this because it's **** like this that cause the engines to fail..

A
Sheared Holding Pin in Clutch?

S
Idle screw all the way in still not enough

E
Are you sick of not knowing your fuel level and can't be bothered to weld in a sight glass? Here's a weldless sight glass.