Well I'm suprized that little motor is doing as well as it is..I rode it on a 20 mile non stop ride..and tweaked the carb in the process, and it pulles really well now. I still have to get a couple of springs to hold the motor assembley down on the wheel just a little bit. Too much pressure will bog the motor down, not enough it will slip...Just using bunjee cords for now...
But it is running great....Now I can get started on my new toy...friction drive also...would rather make it belt drive, but I like that friction drive for some reason...(It couldn't be cause they are esier to build ).
Well maybe dave will show Ya'll How it's comes along..What would I do witout him..Nice garage...the tools to git er done...A good buildin partner and hand....and most importanly...A digital cam...lol...thanx Dave for helpin out a poor feller like me..lol


srdavo said:
here's some pics of Lacey's 100 cc tecumseh, 2 stroke, snowblower engine project. not my ultimate choice for the bike....but it'll prolly be going too fast to make fun of!! 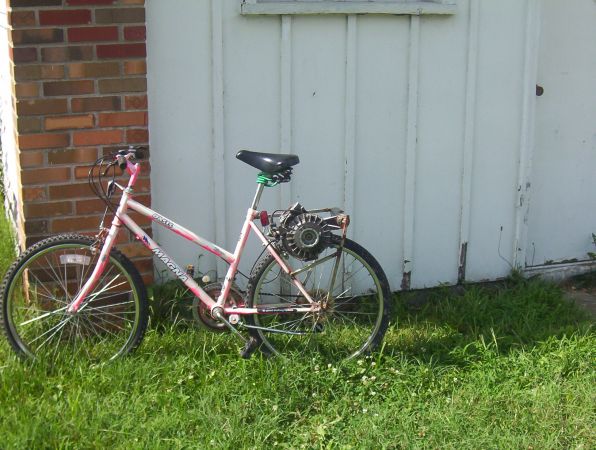 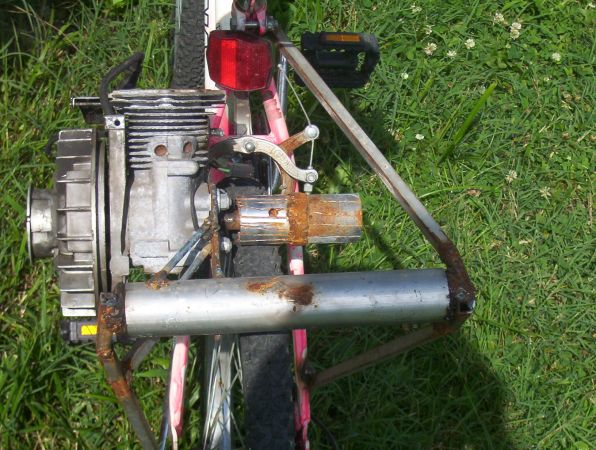 Look at the size of that cylinder!! 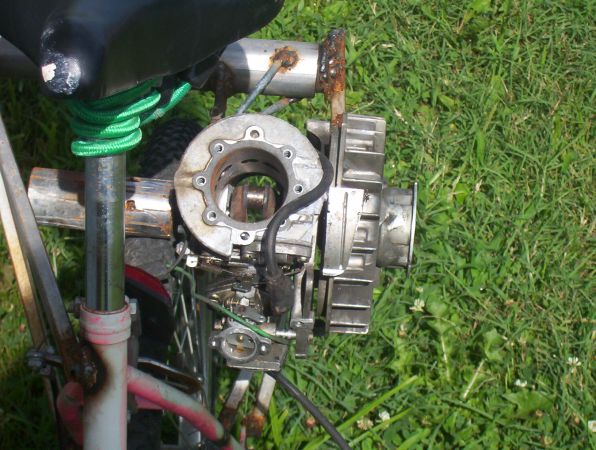 Absolutely no NEED for a snowblower! hahaha

that darned snow blower bike won't sit still long enough for pics...haha
It has rc'd a coat of flatblack paint. (I liked the pink version)
Lacey's at it again....weed-eater to bike, for his Missus.
here's some action shots of this one

I am freaking excited.

this guy brought us a bike & a 39cc chainsaw.

Saturday, after some brain storming....bumping heads....buncha beer...we decided to start sunday, at noon to build this bike. lacey showed up at 10 am & away we went.....a really cool day...everybody & their bro showed up...hehe. my buddy Rick stopped by. He was one of the guys who supermanned over the handlears of a huffy cranbrook, due to that d*mned front fender. His cranbrook is show quality. (he's a painter/body man) he pealed the cranbrook stickers off his bike...put them on his tank & clearcoated it. Looks like Huffy made a motoredbike!! he brought me a bottle, so I can switch my mig to argon, instead of flux-cored wire. Yay!!

Back to the build.....2 gear reductions.....got almost 10:1.....need about 20:1. really weak on the low end, gotta pedal your *ss off to getter going.
I found an 11 toothed sprocket to use on the clutch...to get us at 15:1+, so all is getting better. gonna finish it next weekend.
Bogus info...my gear ratio numbers are all wrong. I have since been schooled and will explain later in this thread

here's some pics of this thing...in progress.


warning.....homebuilt jackshafts were used in this build.
the chain saw is mounted at 2 points & solid as a rock.
this cures the..."what did that motor come off of?" question.
Lacey only set himself on fire once. he did!!...
I had to ream 2 sprockets out to fit this rim & the jackshaft. & run all the chain. and bolt a sprocket to a rim....not my favourite thing to do....but I got it down to easy, but annoying!
& yes...the throttle control is still on the saw! !

There is a fine line between crazy, and full goose bozo. I think you're close.

Alaskavan said:
There is a fine line between crazy, and full goose bozo. I think you're close.
Click to expand...

I think it's way cool. I gotta learn to weld. I've enjoyed your other builds too.

i think my arm would ache from reaching behind so much
is that hole in his pants where he caught fire ?
getting kinda close to important stuff there
dude is a tinkering genius tho !!!
Share:
Reddit Pinterest Tumblr WhatsApp Email Link
Top