Gang, I took Wifey to a Deli in Sac where we often go for BBQ Chicken, I did not see any bikes out front. Everything seemed ok, I've been there many times, had a few beers, and some Chicken, and it was ok, (well,actually VERY GOOD chicken).

Today, something seemed different! There was no-one in the joint, it was quiet, a deathly still about the place! The tall guy behind the counter kept looking surtively over his shoulder and around the room as I ordered a pitcher of Sierra Nevada Pale Ale. Then I told him "we'll figger out what we wanna eat when we git the beer!" I went to wash my hands, as we are just back out of the Fab Shop to work on the new Model 10 Racer. As I came back, I immediately spotted the problem! Now I know why that tall guy was looking so nervious! At a table, over by the window, (where me and my guys usually hang out) there were a couple of ChickenS**t Motorbikers!!!

It was plain that these guys were out for trouble! I could have taken Wifey to saftey, and just baled, but, Hell I'd already paid for that Pitcher! I knew it was a big risk, but I have my knife in my front pocket, and a 15mm combination wrench in my back pocket, I can take these guys! I didn't get anything but a frozen cinnamon roll for breakfast and by Gosh I was gonna eat me some chicken!

I walked up to the tall guy and said, PLAIN and out loud, I'll have 2 Half-chickens! I thought I heard a noise behind me, and looked out of the corner of my eye, but, I'm a big guy, and I could see they were trying to get thier nerve up to try to deal with me. This could get ugly! They continued to drink thier beers and mumble (kinda squak actually) back and forth. These were a couple of rough looking guys and I kinda hate to put thier mugs out here on the net so that others have to see thier ugly faces as I did.

I had finished making my order, and I spun round and made a quick move toward thier table, the tougher one flinched, and I though, well, this might just go MY way! I gave them a break, and went back to my table to drink my beer with wifey.

What? You say you wanna see the menace that was in Reed's BBQ today??? It is your choice, here are the ChickenS**t motorbikers that I had a run-in with today: 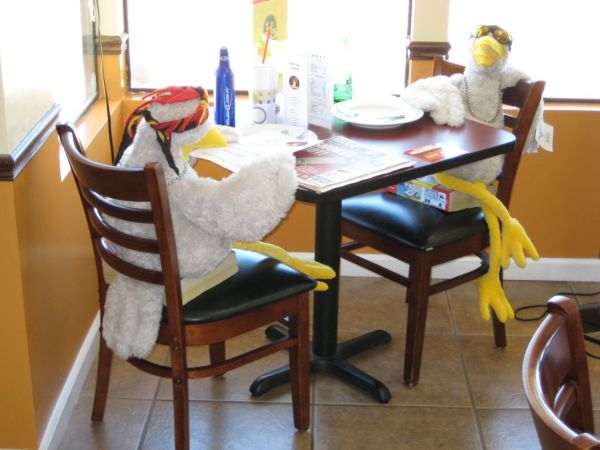 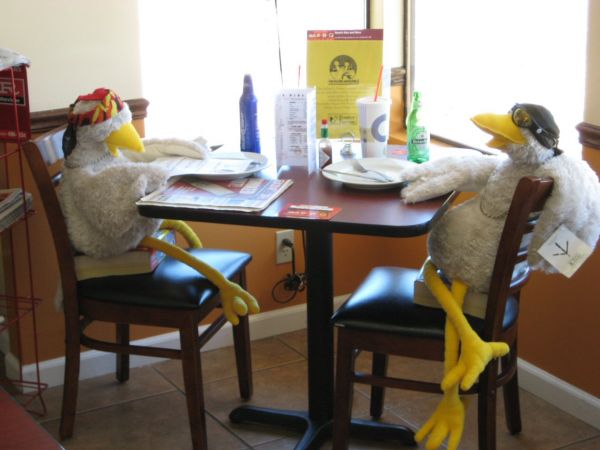 It's a good thing you didn't tangle with those guys...they look pretty tough.

You really had me going there man! I almost fell out of my chair when I saw these tough chickens with the doo-rags!
J

We have returned to the scene, where the crime almost was, and have never again been threatened by the presence of the ChickenShirt MotorBikers.........BUT Many people have come here to this site who may not have been warned about this Low-Life Gang, and I wanted to make sure no-one fell into thier clutches, or thier coops, or slipped on the goo on the ground, or.......... Well you get it?

And he knows a little about motorbikes too. lol
F

WOW MotorbikeMike...your braver than me..........MBc's own Superhero.
I never would have risked going back there and getting fluffy little feathers stuck in my clothes.