K after looking at this forums for a few days and doing my research I came to the conclusion that I wanted a belt drive from GEBE rack mounted or frame mounted. BUT Why $335 to GEBE for a mount, gear, belt, drive ring, and a couple of cables and levers. I was thinkin how fun and cost effective if I put it together but got the gear, kevlar belt, and drive ring from the pros.

Anyways heres a couple links to what I was looking at and ANY INPUT WOULD BE GREAT I NEED SOME WISDOM.

1. Link to the GEBE for Gear/Belt/Drive Ring
http://www.bikeengines.com/orderpage2.htm
2.Link to Staton Inc. for Clutch housing and Shaft w/ Keyway
http://www.staton-inc.com/Details.asp?ProductID=2661

Here is just a rough draft of my idea. 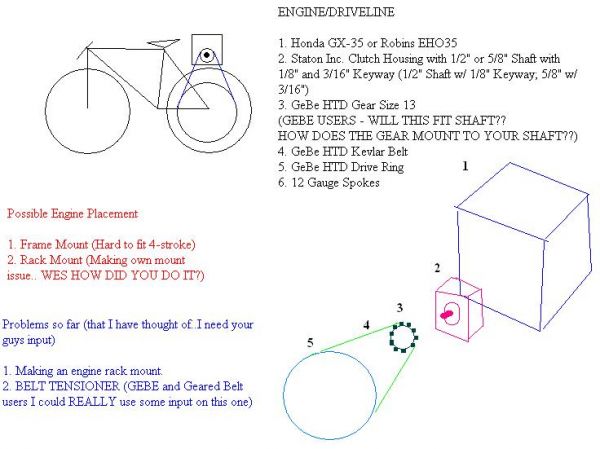 I am hoping that the GEBE gear can fit a 1/2 or 5/8 shaft or that I can at least use an adapter of some soft.

Also I am I missing anything huge? I am pretty new to all this but I learn quickly so let me know anything please.
J

did i say something wrong
G

very interesting theories here
wish I could give input
but I have no knowlege in this one, so am just observing
5

8) Hmmm, how much would it cost for you to piecemeal this kit, versus what the GEBE kit will cost you? and how good are your fabrication skills? with the kit, everything fits. do you find it stressful, or fun and challenging in making parts fit?

Now what I am left with is getting a mount made.

Going this way I can choose my motor like the GX35.

But I need to know a few things first like how GEBE attaches that gear to the shaft.

I have seen another person on here do something similar.
http://www.motoredbikes.com/viewtopic.php?t=1601

But I think it would be better if I got the gear/belt/ring from GEBE.

Then all I would be left with is having to get a mount made.

I've put on over 40 GEBE kits, including the 35 Robin/Subaru 2 stroke and 40Tanaka 2 cycle, the 40Tanaka having TOO much power in my opinion.

The newest one, the 33 Tanaka 2 cycle is the one getting the best reviews, the only improvement anybody can envision is a larger than 22 oz fuel tank.

It definitely is quieter than the 25, and with HIVE'S copper tailpipe, I can see it being barely noticable. (Having ridden many times with one or two customers in demonstrations, even the 25 isn't THAT loud riding right behind it).

Anyway, I'm going to stock 25's and 33's, think the 33 performance is equal to the 35, can be made even quieter with the HIVE solution, and
run just as fast, climb every hill identically to the 35.

I'm not sure what GEBE is selling the single kits for now, to tell you the truth, I buy in bulk. But let's say the 33 Tanaka is $550, complete with shipping.

What ever extra you are paying for is a "tested and patented" system, with a high compression/high tech engine.

Mounting brackets with tension arms are surely $75 or more including shipping, in fact, that is the OLD system, the newest versions eliminate the drive shaft. I think, since they are old tech, GEBE would have to have a mill make you one.

I think the Allen's slot for changing gears is a vast improvement to the old screwdriver method.

Things are constantly changing, I remember having one of the first 40's, Dennis had me test it because Michigan winters were brutal, and the mount was off a fraction, gobbled three belts until that test mount was changed.

Then things were fine.

Same thing with that experimental 14 groove gear, scrapped after testing, except for the round track racing they are doing up there.

My math would say you could save maybe $75-100 by thinking about the 33Tanaka 2 stroke, but at least all the components will mesh right out of the box, you'd have a warranty which Golden Eagle would honor, and I don't think you'll find superior engines than the Zenoah and Tanaka for the bucks.

Too bad you are not local, a demo ride would show you they are NOT that loud, the few folks on MB.com that have tried both will attest to that fact.

I have a guy who is doing what you envision, using everything but the kit engine, he had a Snapper or something laying around, he can't hit 20 miles per hour on a straightaway.
J

Jimmy, if you want a rack mount go GEBE, complete kit. For the money, pricey yes, but you get high output, dependable transport, and a smile on your face that you can't wash off. I run a 40cc Tanaka... climbs hills, runs fast on straightaways. Can't beat it.