the "SpookyTooth Cycle Death Race 2007" was awsome!!!!
the day started way too early for me, had to drive 2 1/2 hours to get to the rally. got there early and met with alot of kewl people and enjoyed seeing all the differnt bikes. we passed out stixers and told everyone about the MBc web site. channel 11 news from tucson was out there covering the rally. Roland showed up with his new 2-wheeled electric bike and trailer. the trailer was for holding all the batteries, about a 100lbs.
there was about 30 people that showed up and about 20-25 were riding in the race others just came out to support. this was to begin at 11am, but with registration and everyone busy getting there stuff ready, we didn't start till about 12:30. the people that were racing, were racing against the clock so it was timed. we started the race a quarter up the mountain at about 3000 feet, which didn't seem bad driving up in my truck. once the race started l thought for sure l was going to blow my engine or something bad was gonna happen(engine wise). we start rollin up the mountain and l was full throttle the whole way, l passed acouple people going up hill(with 48t sproket) there was no way l was going to pedal, cause everyone that had the 32t sproket was pedaling---hard too. Roland passed me on his 2-wheel electric bike and trailer, but he was pedaling the whole time that l seen him. the mountain was a trip, the views were killer and there was a little snow on the top of the mountain.
azkronic wasen't in the race but just for the ride, he stopped and helped people along the way which was very kewl and Roland had a support truck(Fred)following behind everyone, just in case.
once everyone got to the finish line, there times were taken and eveybody grabed some lunch. everyone was just looking at all the different bikes and just shooting the shi%.
the first place winner got an engine 2-stroke, second place got a killer carb with a remote choke, and third place free tune up.
l think half the riders rode back down the mountain, because some engines were toast and others had probs. Going down the mountain was killer and crazy, if you thing 35-40mph is fast, think again. the 1,2,3 place winners flew down the mountain at about 50-60mph and thats no BS. these guys were crazy, by the time everyone got back to the start, those 3 guys were packed up and leaving. all in all it was a very kewl experience, and will go back next year, fooooo shoooo
Sorry for the long ass post and hope you enjoy the pics:
Azkronic and George(OG) azkronics bike 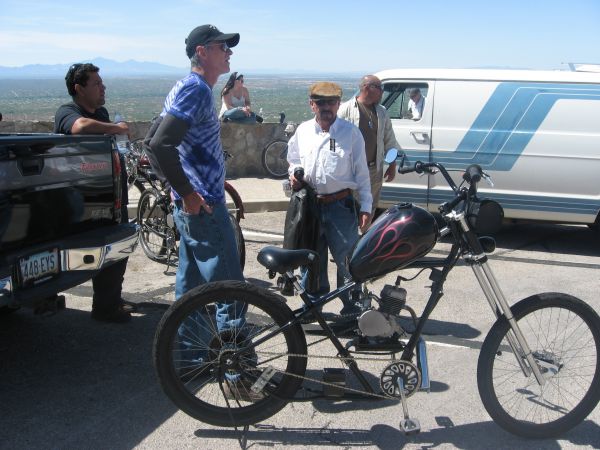 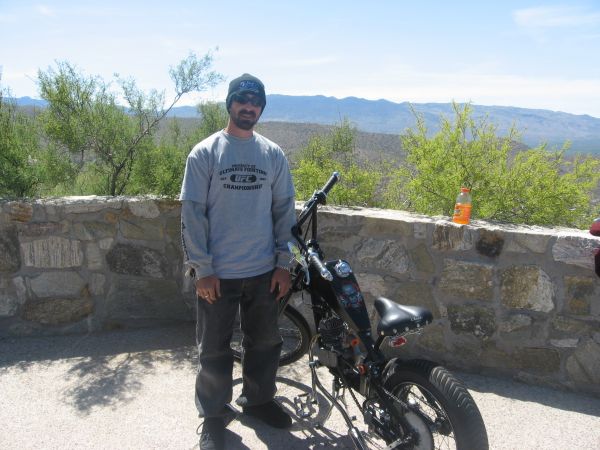 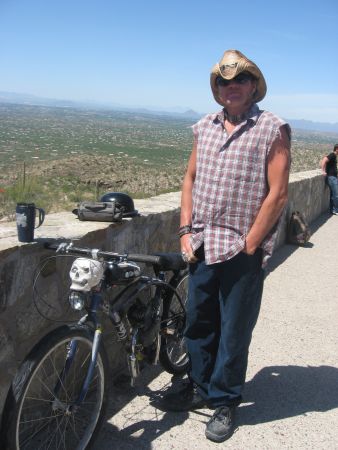 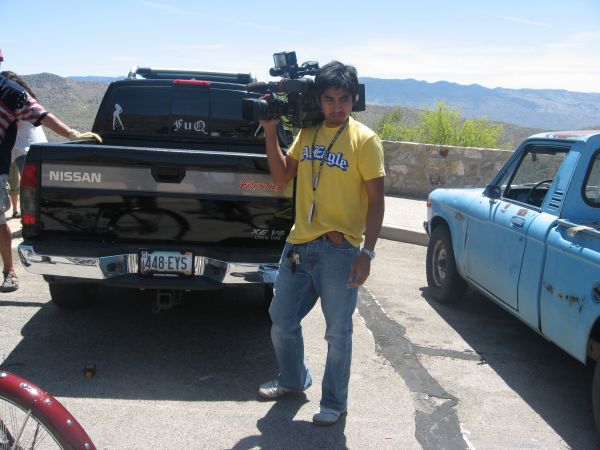 Rolands electric bike with front & back motors, and trailer for batteries. 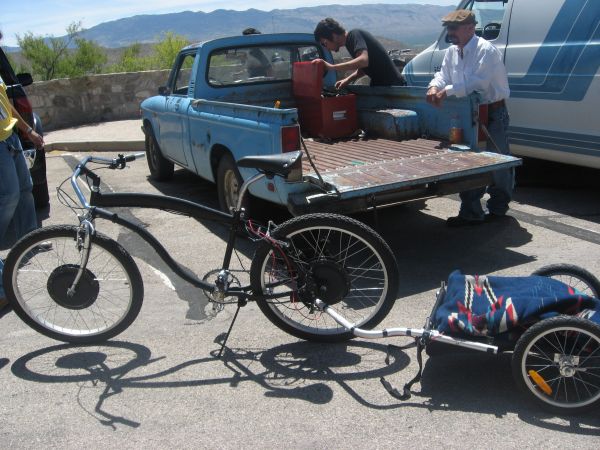 Everyone line'in up to start the race 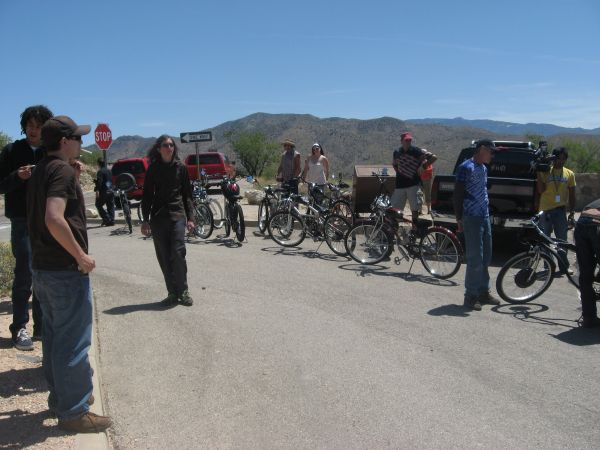 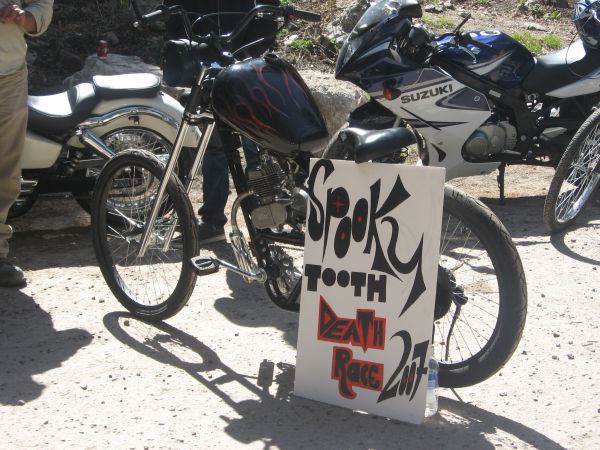 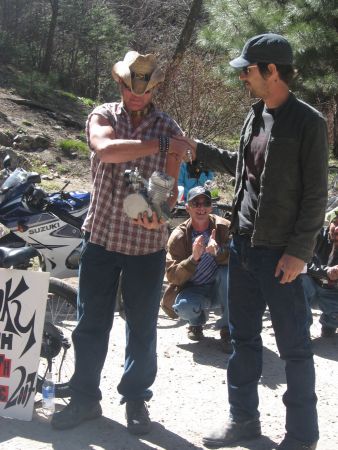 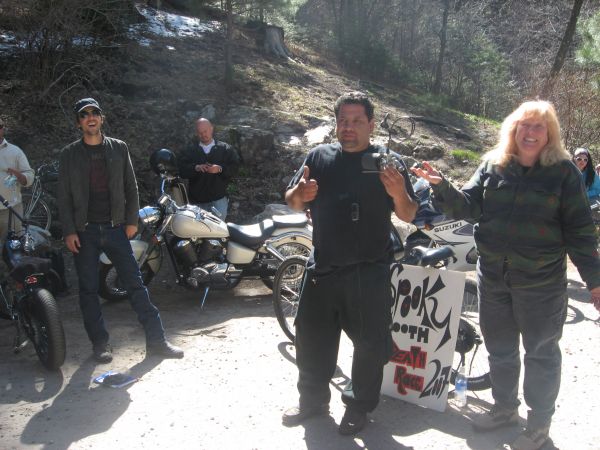 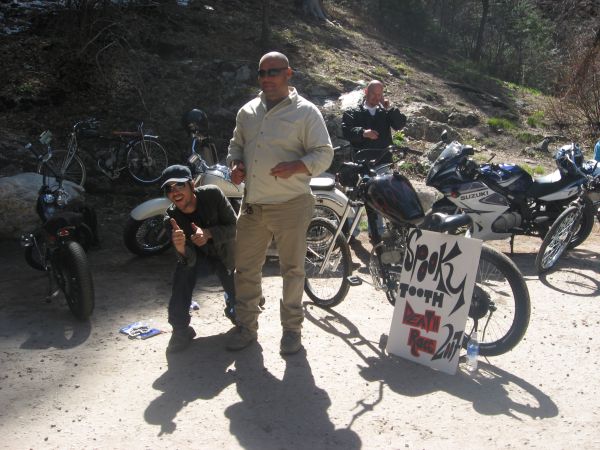 Awesome dude!
Wish I coulda been there, it looks and sounds like it was a blast!
T

it was very cool to see all the other bikes... first we saw that weren't our own
the people were all pretty kewl, not an attitude in the place
I had a lot of spare stuff (plug, gaskets, filters, ass't nuts,bolts, studs and tools) in my tool bag thinking I/we would have probs, but only helped a couple people with chain and fender probs
the scenery was amazing with some big dropoffs 5 ft from the road .
I wasn't racing so I took it easy and just cruised up the mountain, had a good lunch, and flew back down (gravity is proof the earth sucks )
all-in-all, was a really good day and I enjoyed all of it
G

dang, it sure looks like it was a really good time...thanks for the most excellent report, 'vinnie 8)

what are the winner's "secrets", has he done anything special to the engine?
F

wow that looked like alot of fun ditto on augi,s question .
what did they do to the engines to go that fast uphill i mean. gosh wished i could have gone !!!! larry ca
A

the winner really didn't do anything to his bike, performance wise. he did have a 36t sproket, most everyone did, and thats why they were pedaling there asses off going up hill. once they hit a flat road or a down hill part, they were gone........l was quite amazed at how fast they were going.
next year, l suggest some of the people from this site show up, it's like going to "Sturgis". its one of the best times l had riding and hangin out with people, just too kewl of a time............

Hi everybody! newbie, here. Thanks to Vinnie for coming out and was good to meet you. nice guy. Kick-ass looking bike, too. At first, I was thinking OHCRAP ! Look at these hills! But fortunately I have a motor that pulls like a tractor, and no modifications were done to get the win except for a new plug, higher oil ratio, and tune-up from roland's man, fred . Oh...and some pedaling. Anyone wants to get a ride going, hit me back.
G

congrats on your win, we look forward to your input on the forum...it looks like spookytooth really knows how to put on a show, & and thanks to azvinnie & azkronic for being such great MBc ambassadors

hello everyone, i wish i had known about this site earlier. again, thanks to azvinnie, azkronic, and augidog for the kind welcome.

T
Got it assembled, it sputtered, ran for a few seconds then died
2 3

J
Suggestions for bug out build
4 5 6