Got talking to the owner online of TSP Cyclefarm bike in Italy telling him how i was looking for a frame that would take this 130mm wide rear rim i had bought. He went on to tell me how he was in the middle of designing a chopper with a 170mm rear dropout. So after a few emails back and fourth i ended up with a tsp cycle farm HD Wave 170mm wide frame voweling i would never put a motor on it and as a bonus ended up with serial number 002. 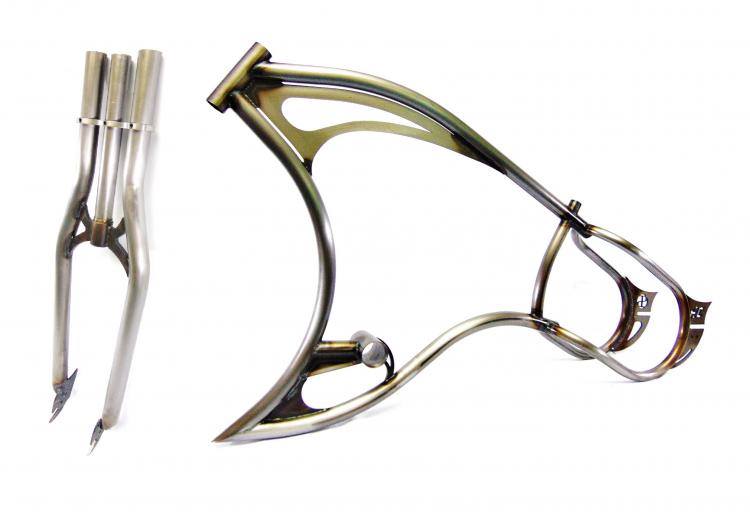 then couldnt decide what colour to paint it 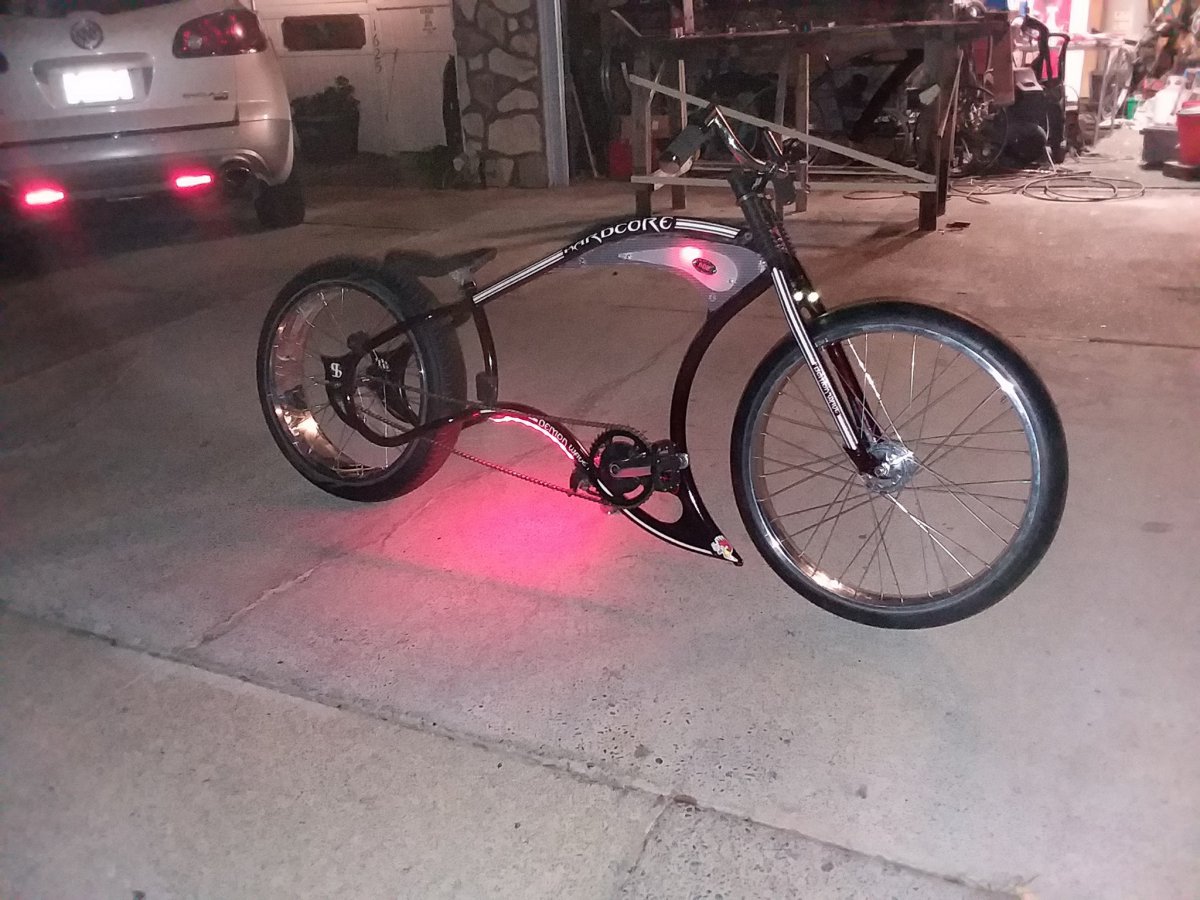 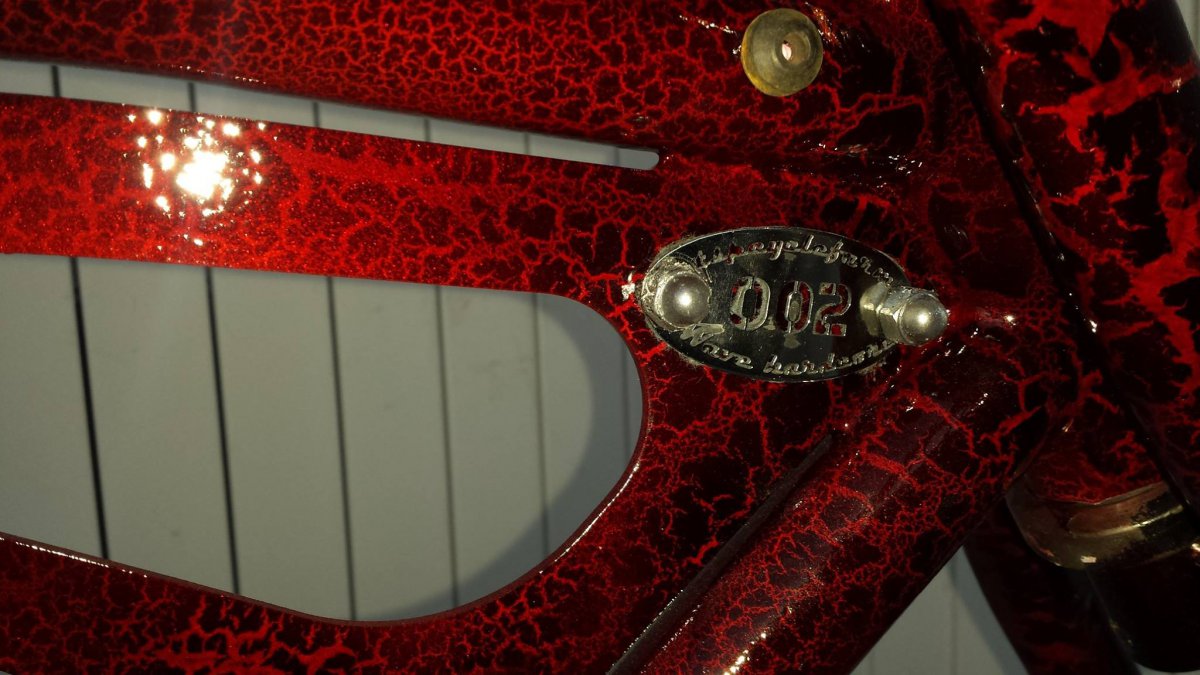 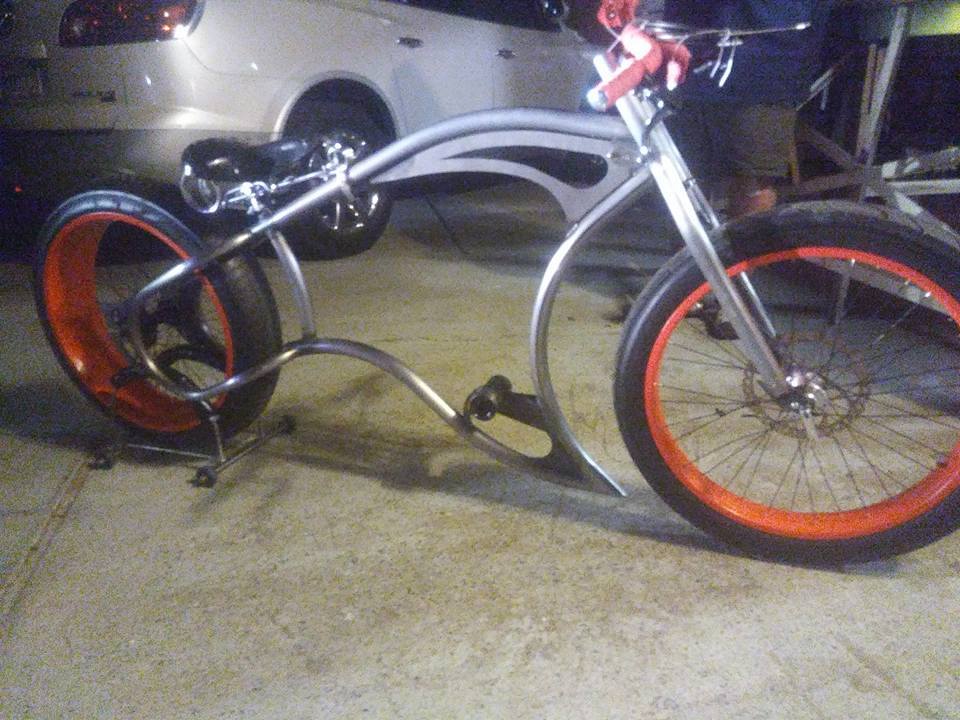 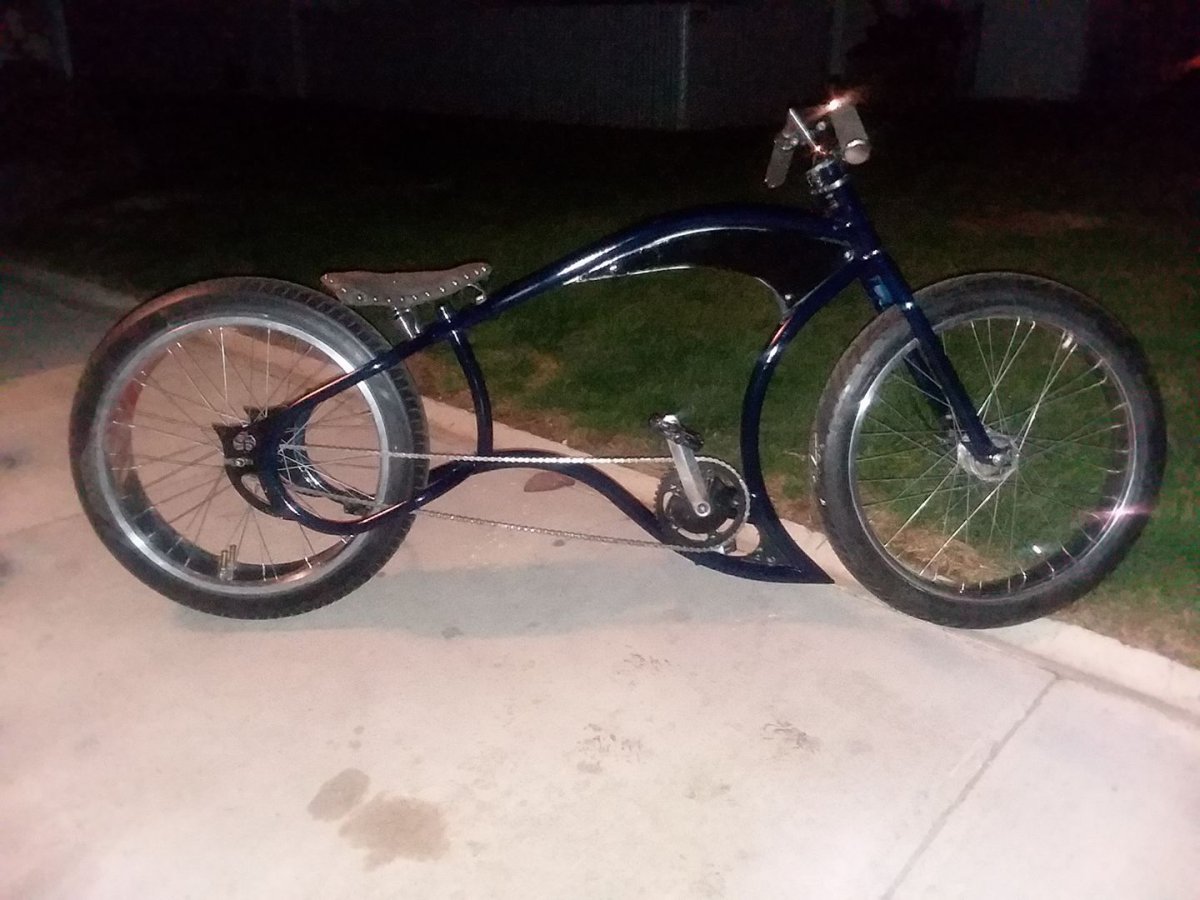 Then i didnt like the seat arrangment as it wasnt set back enough for my long legs and i really wanted the seat to sit lower to the back wheel. 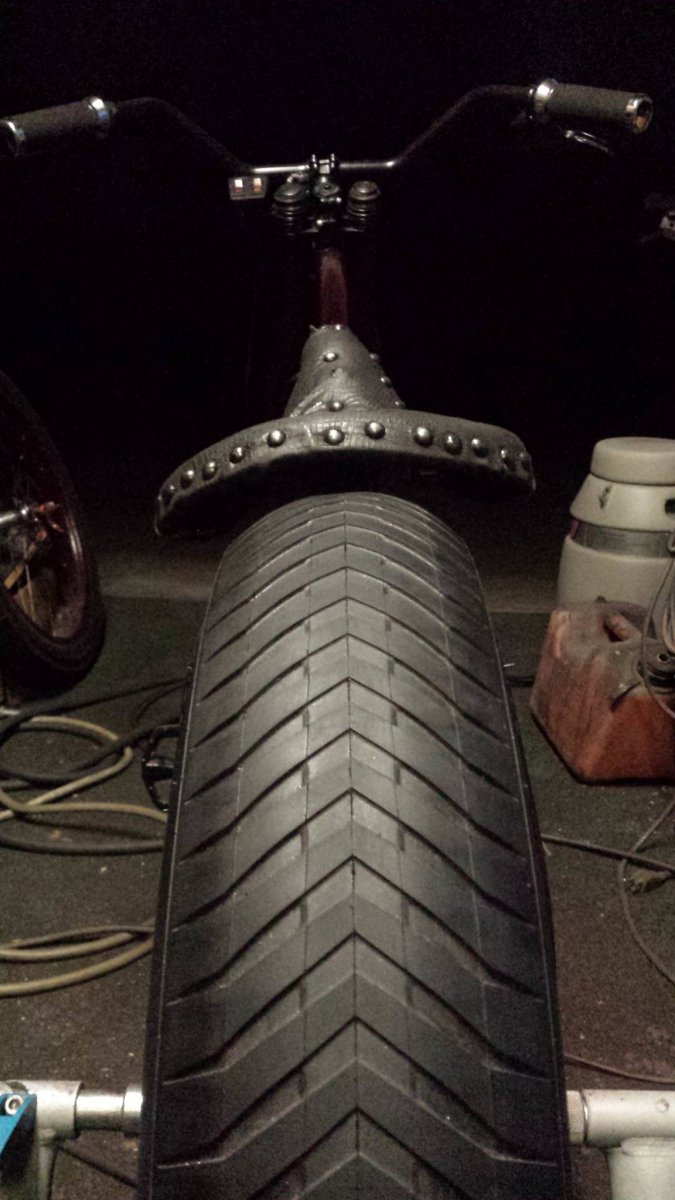 A friend of mine asked me to build him a motorised lowrider trike with a 125cc motor which made me consider maybe putting a motor on my bike.

So i stripped it all down AGIAN and purchased a 79cc predator motor which harbor frieght was selling as a water pump. After getting it and stripping it down, removing the governor and oil sensor i discovered the main drive shaft was considerably smaller that the 3/4in one i saw on the motor harbour frieght were advertising as a stand alone motor. Then because it wasnt spa approved i couldnt purchase one in California yet they sold them as a water pump.. Go figure.

So i ened up buying a 4 stroke kit which gave me everything i thought to get this project done. 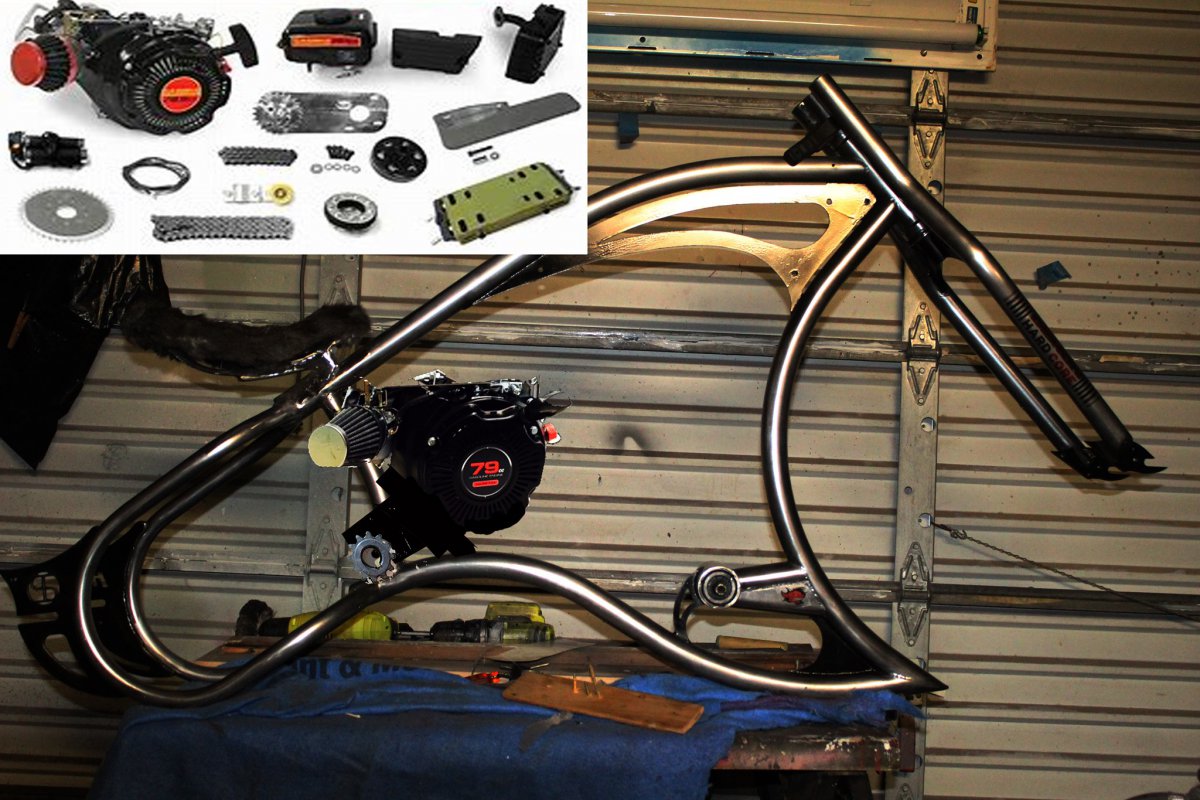 So install the kit and the first thing i notice is because of the wide rim i had to reconfigure the clutch jackshafts drive sprocket so it would line up with the rear wheel sprocket. That was fine but after riding it the noise of the 2 chains on the clutch was to much and one time the chain bound up and nearly ripped the engine out of the frame. Also the clutch that came with the kit was useless and was struggling to handle a guy my size so i decided i would ditch the Gokart clutch setup and see it the comet 30 torque convertor or CVT would do the job. I was also looking around to see if i could replace the rear chain drive for a belt drive and came accross a kit that was for a 2 stroke bike and after mucking around mocking it all up discovered if i used the plate that came with the kit but used the commet clutch drives it would line up perfectly with the belt drive sprocket but i had to buy a shorter belt,, No problem 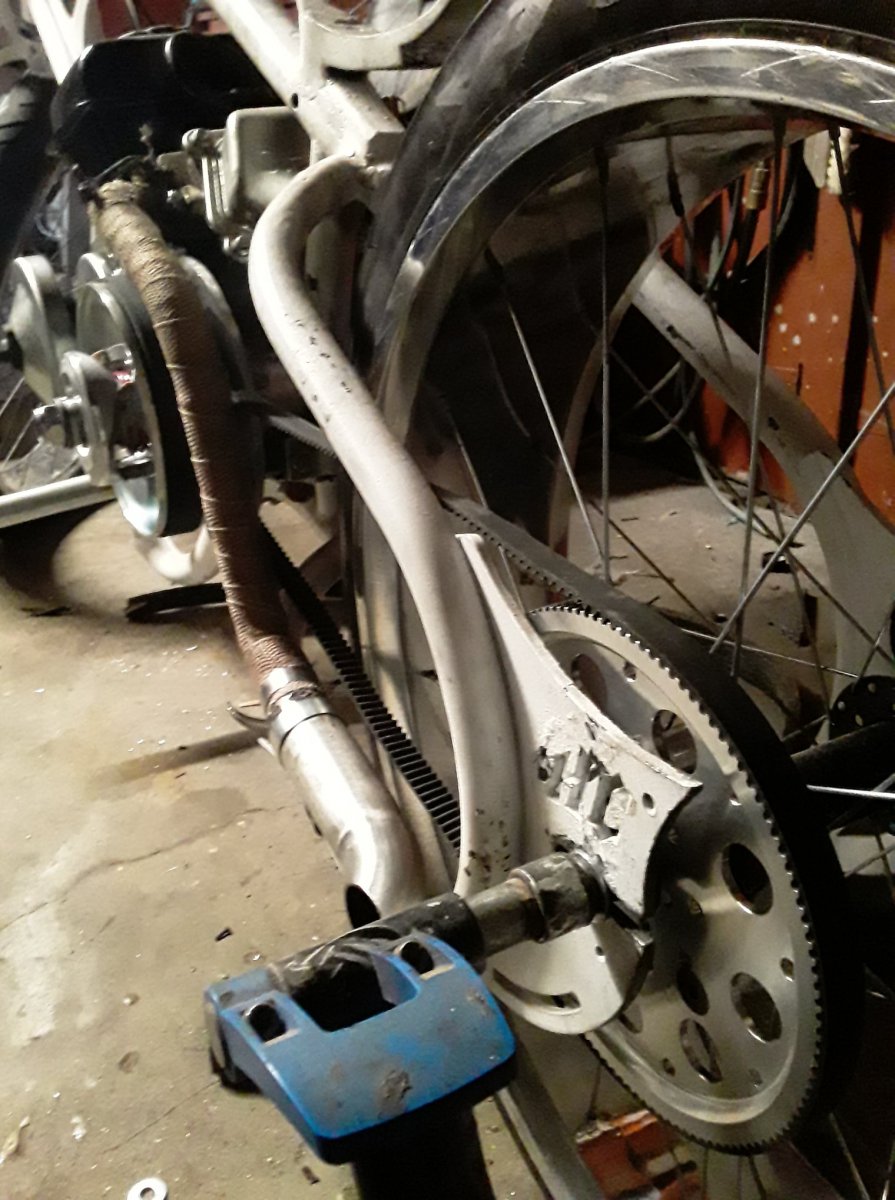 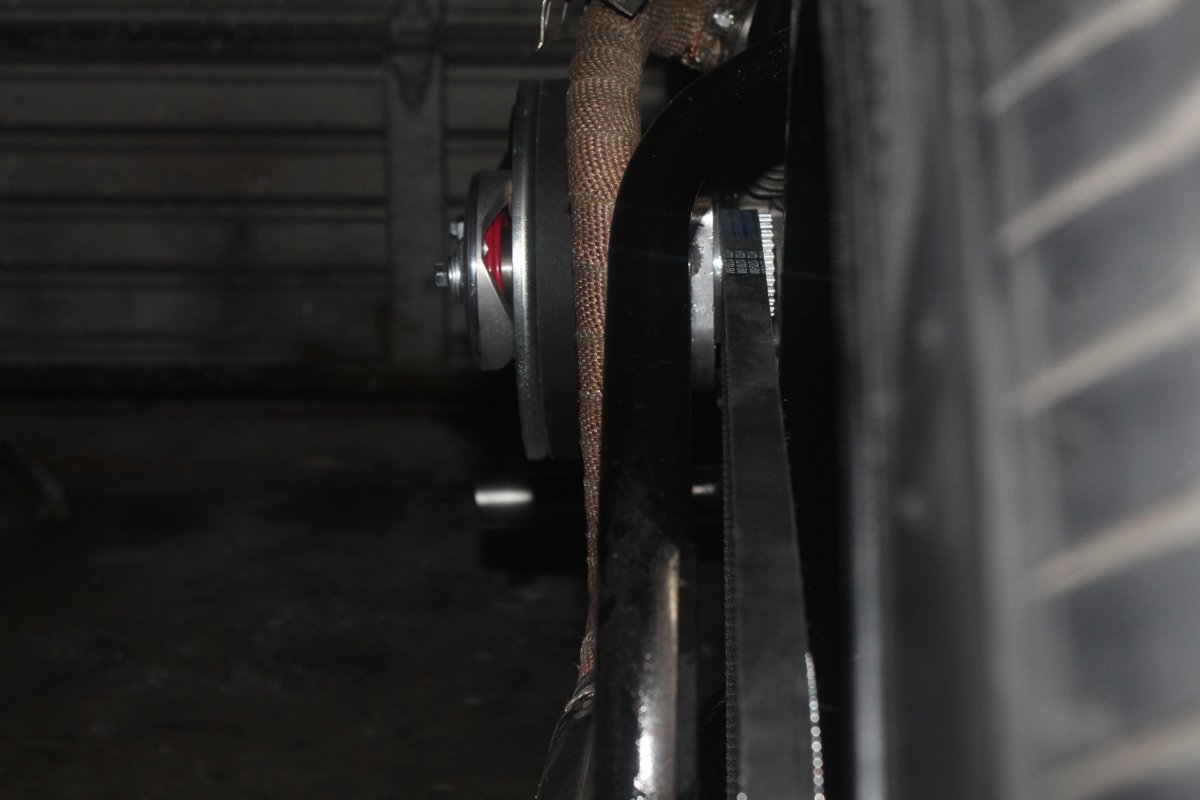 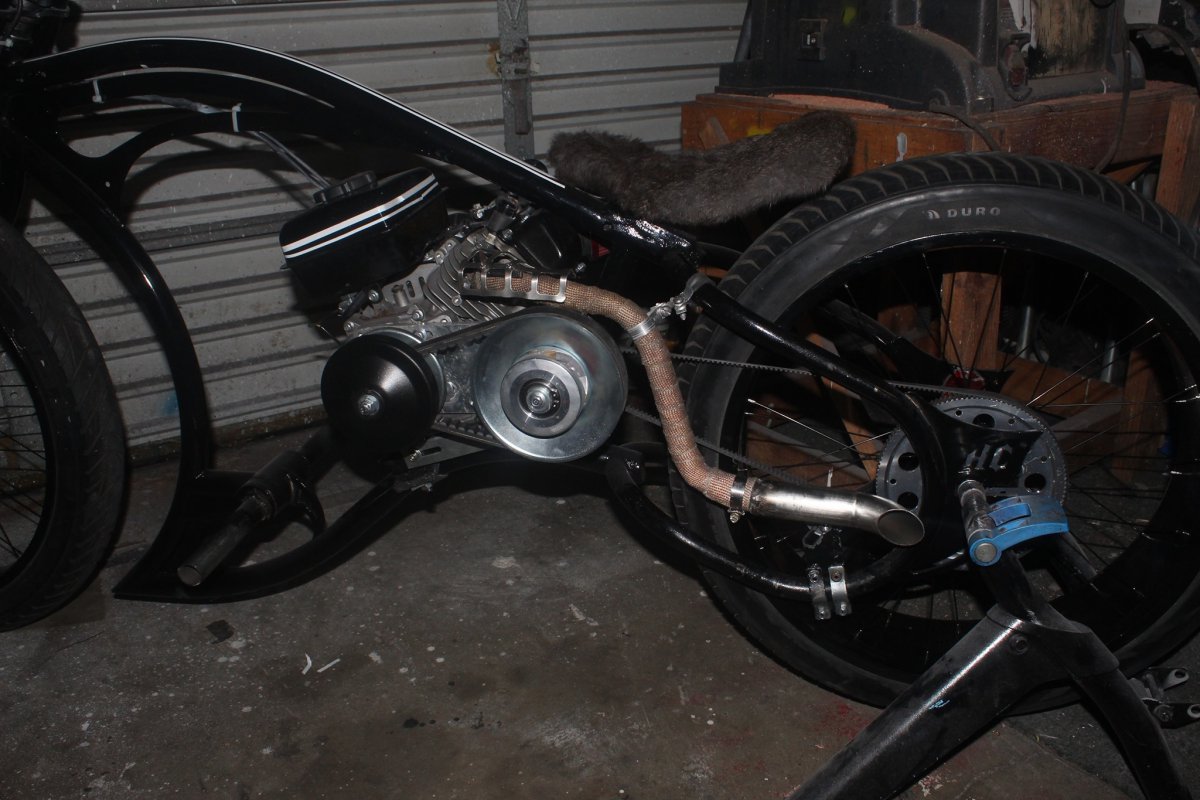 So there you have it, currently i am waiting on some new custom bars for the bike and trying to figure out how i am going to put a rear disc brake on this thing and am yet to give it a decent test run but will keep ya'll informed as this thing progresses. Hope you like it, feed back ive had on it so far has been great but proofs in the final ride.. All in all its been fun and after its done i will probably sell it if the price is right and try something else on another frame i like. Anyways thats how ive spent my covid 19 days locked down stay safe people and take it easy..
Click to expand...

Beautiful bike and craftsmanship. You're very talented. How fast does it go? Is it easy to ride/steer?

darwin said:
Beautiful bike and craftsmanship. You're very talented. How fast does it go? Is it easy to ride/steer?
Click to expand...

yeah it is although the rake on the steering could have been designed better ,if you dont hangon to them they tend to pull to one side. I did mention that to the guy who built the frame but never altered it. As far as speed goes, with the way its currently setup around 35mph due to the back belt drive sprocket being so small. The last few days i have been thinking about using a 20in rim and making a sheave like on the old whizzers which would increase the over all speed a fair bit i think but until i try it i couldnt tell you what sort of difference it would be. I guess it depends on the riders weight and how well i have the cvt clutch setup. If i decide to go ahead and do it i will post it and let you know. Thanks for your positive comments ..