The end of the line for properly functional internal combustion engine and electric powered motorised bicycles in Australia.

You will be hit with a $1000 fine, and have the motorised bicycle impounded. It will cost $800 to have your bike returned to you from the impound yard, and then you will have to attend court, where they will hand out another $1000 fine for driving an unregistered vehicle, and more fines and penalties if you are an unlicensed operator of a motor vehicle.

As the maximum permitted speed of a motorised bicycle (not a pedelec) is 20 kilometres per hour (13 miles per hour) you can also be issued with traffic fines for exceeding the 20 k/ph speed limit.

Totally draconian laws, which will now turn many law-abiding citizens into instant criminals, for doing nothing more than what they were safely doing before January 1st 2017. 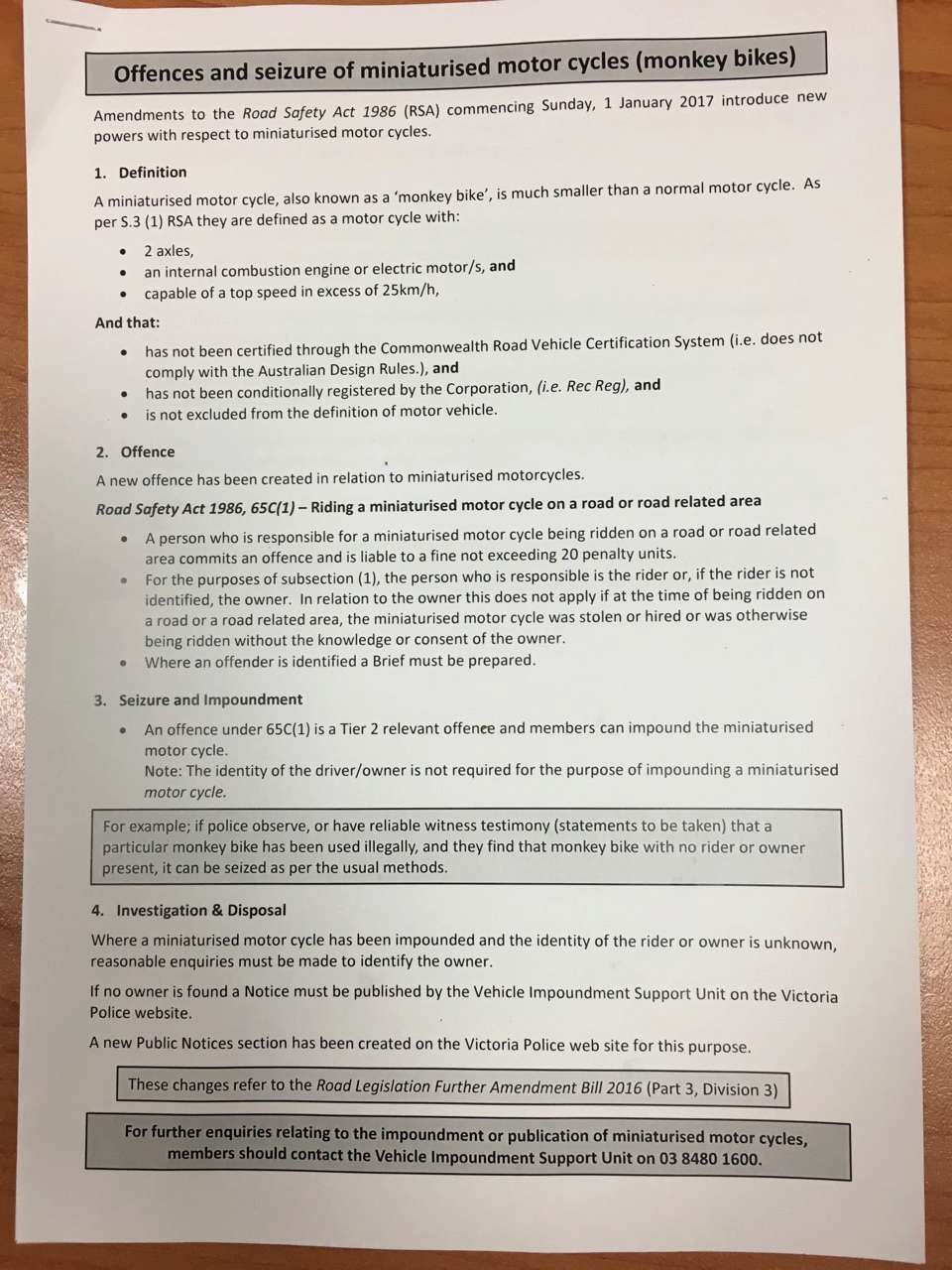 I am not Australian, nor am I a lawyer. But it looks like this applies to "monkey bikes" or what we would call in the states "pocket bikes". This doesn't appear to pertain precisely to a motorized bicycle.
F

This information has come hot off the press from a Victorian Highway Patrol officer, as it applies to motorised bicycles that do not comply with the regulations for a "motor assisted bicycle, where the engine or motor is not the primary source of power, and where the engine must be completely disabled and non-operable when the pedals stop turning, and when the bicycle exceeds 20 k/ph (13 m/ph), and when the engine output power exceeds 200 watts which converts to an anemic and functionally useless 1/3 of a horsepower.

It's the end of the line for motorised bicycles with a proper level of functionality as an alternative means of transport, including "all" functionally useful electric powered bicycles.

The police are rubbing their hands with joy over this new legislation.

New I live in Melbourne and that law has always been .motorized bikes have always been over wattage so always been illegal .the vic rode site says its max at 250w and 25kmh and motor can not work at 25kmh and over ...so you can ride them but when the cops get you you have to be able too prove its 250watt or under and you weren't speeding.that paper you got is for monkey bikes .

And if it's 250w and under and you are doing 6 yes 6kmh you don't have to pedal anything over that you will have to fake pedal.till 25kmh ..by law all you need is a front brake lights and helmet .vic roads won't register these bikes .i have called them .gone in .thay say I don't have to . And thay don't do it.
F

I wish to make it clear to you that this new legislation was brought to my attention by a Victorian Highway Patrol Officer who clearly stated that this legislation encompasses not only monkey bikes, but all motorised bicycles that fall outside of the legislation for the 200 watt ruling.
The 250 watt ruling is for pedelec bikes.

Those arguing against this legislation are fools; to think that you can argue against a Victorian Highway patrol officer with 13 years of experience in the Victorian police force, who may i add, is trained to be competent in all aspects of traffic and motor vehicle legislation.

Most frustrating as i have (over 6 years) invested around $12,000 in my motorised bicycle and accessories.

From what I read it's targeted to monkey bikes period. Is a bicycle classified as a motor vehicle in Aussieland? Maybe bicycles aren't classified as motor vehicles. Here they are vehicles with all the rights and responsibilities as motor vehicles but not motor vehicles. Whatever you do to a bicycle it's still a bicycle with 2 pedals and not DOT certified. Been a couple of court case rulings saying just that. That's in my state others are different so take that for what it is...........I don't understand the hostility to our hobby. Is it the liberal theology to just control our lives? A MAB is harmless and is enviro friendly. I don't get it. Then down under the hostility to electric bikes, that's friggin insane!

Highway Patrol Sergeant cook pulled me over doing 57 in a 60 zone said he was gonna get me for it no matter what got my phone number call me back in a week and said there's nothing he can do there's a loophole in the law .but the police will try to tell you that by having a motor on your bike it makes it a motorbike but it does not unless they can prove it does put out more than 250 W and that you were doing more than 25 km an hour. Now the biggest problem is when you do get pulled over even doing the appropriate speed and peddling and they find out your motor puts out more than 250 W and then your screwed .look up Electric bikes on Vic roads it says that this law for electric bikes also covers petrol or any other type of motor on a bike a monkey bikes do not have pedals and are there for a full motorbike and the only reason they are bringing up the law again is because that lady got killed in the car park of the shopping centre after being hit by a kid with a monkey bike. I have been pulled up at least 10 times by police all issuing me fines for unregistered motorbike I deny the fact that it is a motorbike and by the time I have to go to court the case is dropped other kids Other kids just take the fine and pay it

No matter what the police tell you look up vic roads and throw it back in their face .or call them
F

I have no hostility to motorised bicycles, or those that ride them.
I am just as angry that this new legislation makes me a criminal and allows the police to confiscate my bike "on the spot", and have it impounded; leaving me stranded at my location, with penalties that will amount to around $3000.

This is part of my setup, so i am most upset that i can never take it out on the road again, nor my touring setup, which has travelled over 60,000 kilometres (37,000 miles) without incident:

I am simply displaying the relevant legislation that now outlaws "all" motorised bicycles (both internal combustion engine or electric) that do not comply with the "new" regulations, which effectively makes a motor-assisted bicycle (including electric powered) a worthless and unrealistic method of transport for those requiring their bike to be a properly functional alternative to a conventional motor vehicle.

Secondly, i was sent the relevant legislation and have posted it for all to see; legislation that encompasses all motorised bicycles that exceed the 200 watt ruling.
Furthermore to make everyone who is located in Australia aware of the "new powers of confiscation and penalties" that the police have at their disposal.

Thirdly. A motorised bicycle that falls outside of the 200 watt ruling is classified as a "motorcycle" which requires it to be ADR compliant and does not allow for the bicycle to be registered.