Fire and Water, a collage about droughts...

This is a two parter, Fire and Water, and since water is life, I'll start with what old-timers are calling "the worst ever". On the map below, Cullman County is smack dab in the middle of a nearly 2 foot of rain shortfall. Cullman is the number one Agricultural County in Alabama, ALWAYS makes a corn crop, but not this year.

The more humorous part is the Fire, so bear with me..... 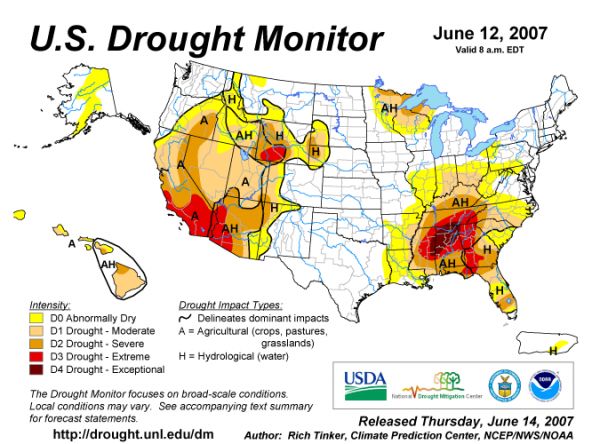 Rough Edge, my community, is nearly "highest ground", a knobby hill called Summit is about 5 miles away, can be seen from certain spots on the back twenty acres.

I built up the overflow on our upper pond, so there is no chance of going completely dry, and the neighborhood knows if brush trucks need to refill the tanks in case of wild fire, the gate is not locked and this is the pool they can draw from. 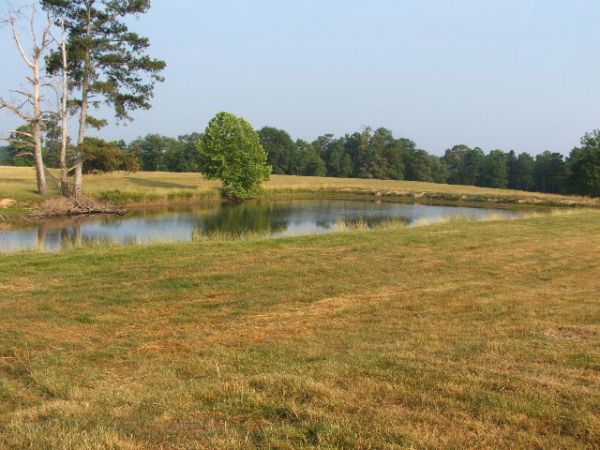 We have four ponds and a creek, the middle pond is the least reliable, and it probably will turn to dust by the end of the month. Usually it holds till August, but not this year. If I still had the cattle herd, things would be pretty dire. 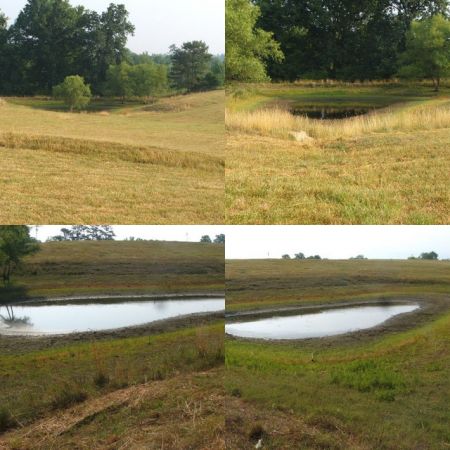 The creek running through the woods is "Millie Branch", flows to the Mulberry on the county line, then to the Locust Fork, Black Warrior, Warrior, then joins the Tombigbee and flows to the gulf. While the creek bottom is lush (good for the goats), the creek is dry and at the property line, where it intersects with Beckworth Branch, water is in deep puddles. 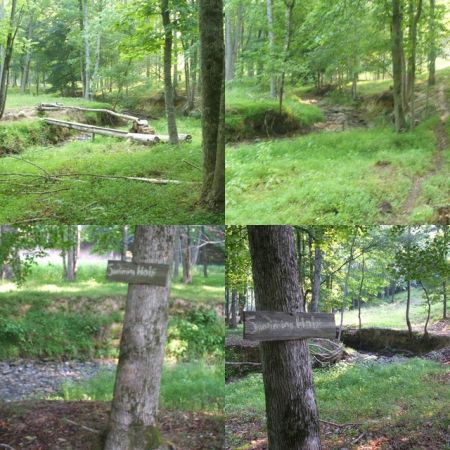 The back twenty is browning hard, but I have decent stands of Bermuda and fescue, goats are MANURE MACHINES, and that accounts for the pasture staying greener than most. 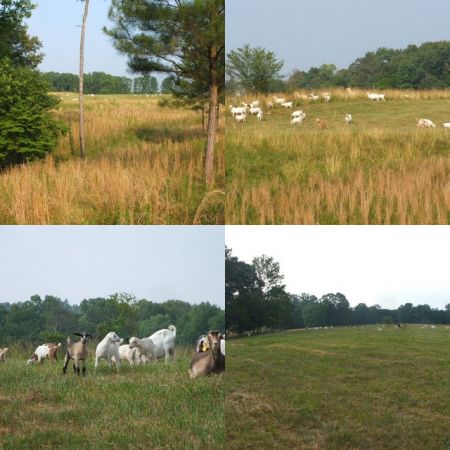 The reason I was walking about with the camera that Friday was we were about to rotate out "Dollar Bill" (FMX Deauxman), our 100% Kiko Buck (Italian line) with another breeder's Spanish type Kiko, the 2 year old brown shaggy bugger in the bottom right picture. 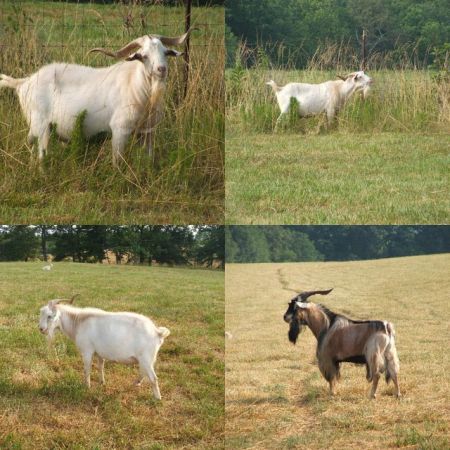 The back pond is spring fed, if is dries up, the goats would never waste time and go back there, it's a mile to the back gate, and they would stay up here on the front part of the property. 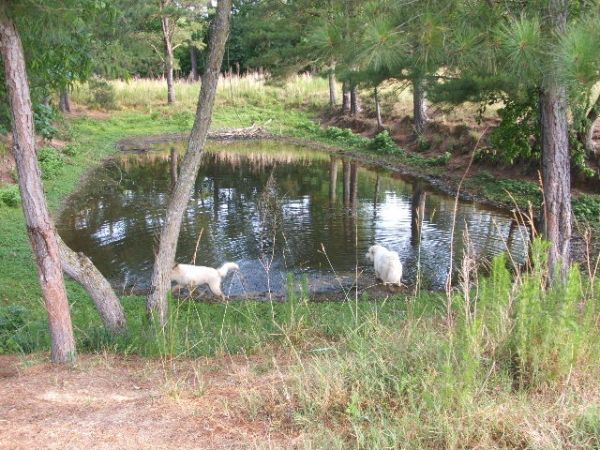 Finally, we have a small pond that I really hope does run dry, so I can burn the 4 foot pile of leaves that have built up in the bottom... 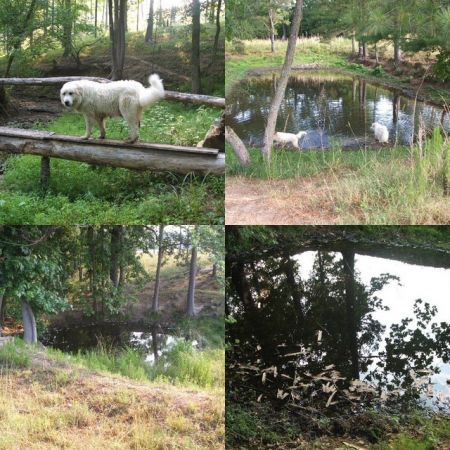 I'll edit this and add the FIRE part of the story later this afternoon.....
L

can you stock them with fish so when me and my son drop by we'll have some small fishing gear with us and we'll pick up some diet pepsi too and pass a day drowning some hooks
Click to expand...


You bet, any MB. member on a run through the area, bike or not, is welcome to pitch a tent- few mosquitos this year......you could blast snapping turtles out of the ponds, that's for sure.

Anyway- Sunday was Fathers Day, my brother and his two kids came over. My nephew Michael is twenty, moved up to Maryland, and through his volunteer fire department affiliation, got a $20 an hour gig guarding the Marines Presidential helicopter. Bragging about loafing in the Prez. lounge chair.....

So me and Billy and Michael jump on three bikes, and less than a half a mile away, come up on the burnt out shell of a house visible from our garden. 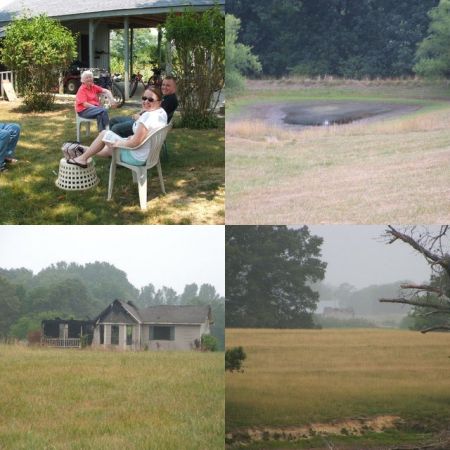 I didn't know it burnt !! And never heard a siren. We went to Leldon's house (he's Mikes godfather) and Leldon didn't even know about it, he's freaked cuz he rides a regular bike for exercise and passes it all the time.

Mike, the "expert" makes an opinion: It must have happened days ago, because there's no smell until you get close, no water puddles in the basement.....Leldon is astounded, that it happened less than 500 yards from his door.

We stop a few more times on our bike ride, and NOBODY knew the house burnt. Around noon we all went to the buffet lunch, and ten minutes later Leldon arrives, when he sits at the table with us he informs the "expert" Mike that he's full of sh**, it happened at 3 a.m. that morning and the departments didn't run the sirens......Still, nobody in the area knew about it.

So, cut to Monday, 2 pm, I'm in the living room, thinking about my siesta, the phone rings, a neighbor Donna Farmer says her husband called, their power was out, and when he looked out the window, the transformer had blown, our pasture was on fire !!!!! 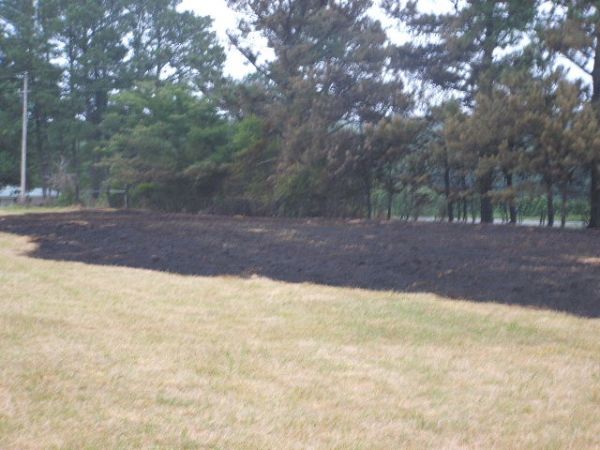 Mom hustles down with a rake, I hop on a bike with a wet broom. Butch Farmer is out on the road, and Carol Kelso (who is deathly afraid of fire since their barn burnt) is in their yard getting her son, Nick, to so something.

A passing truck stops, he has a 1 gallon pumpup full of water, and comes out to help me and mom, when the flames went swoooooooosh, up those loblolly pines, flames shooting 40 foot in the air. 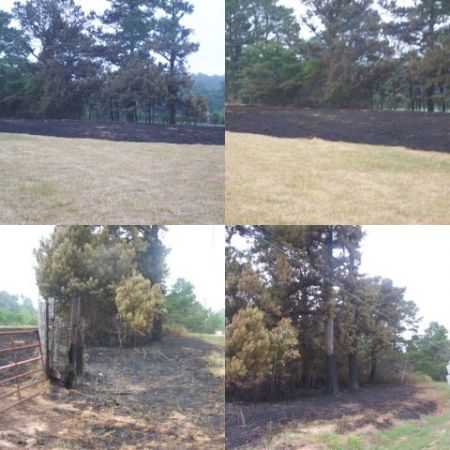 I look over at Carol, and her eyes look like headlights.

The first fire truck arrives about the same time she gets a long hose put together and has her son jump over that fence like a pole vaulter, right as the flames hit the corner fence posts.

Carol was in the shower when the power went out, looked out her window to see me and mom swiping at the fire, so the whole time she's thinking I lit it (I've had two incidents cleaning up the place, the last one in 2004 that took out the back pasture and had 4 trucks involved).

The power company boom truck arrived, and they looked up the pole (I was wondering why the transformer was in one peice, usually they blow oil all over when they explode).

A BIRD CAUSED IT ! Then when they go up the pole to rake off the transformer, TWO BIRDS fall to the road. 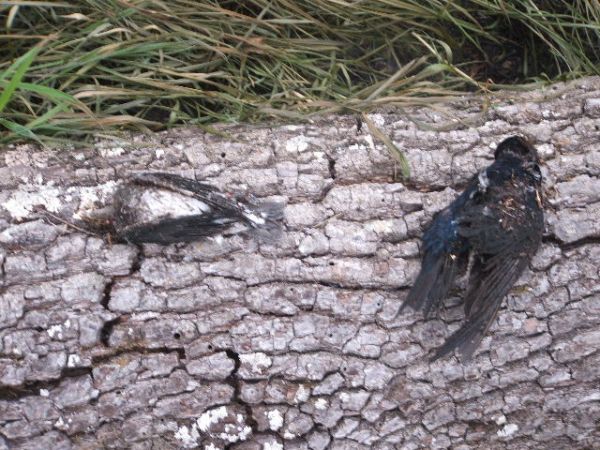 I put them on display, cuz nobody would believe me. They aren't even the same species, they have no meat left, but look like a mockingbird and a dove had been screwing around.

The next day, when I took the pictures, I noticed another potential arsonist on the line... 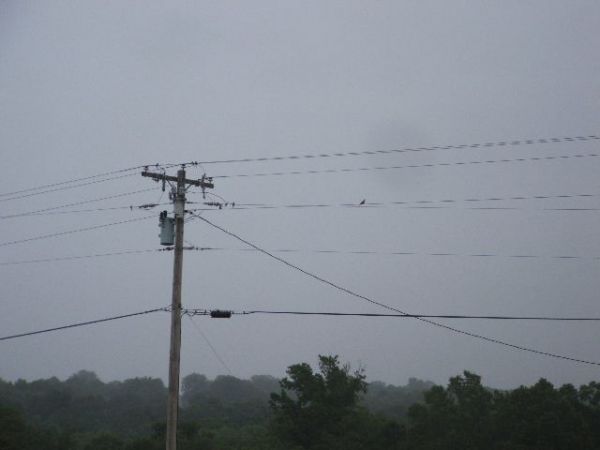 Oh, and when the guy with the pump up sprayer left, he still had about a half quart in the bottom.
J

I only spent about 22 years in Alabama and don't recall any drought like you're having.
BTW: ask the fire chief for an affadavit saying that the fire was for (and by) the birds

I forgot to mention, the previous week I finally sold the hay (and in the B'ham News video, the mower is running in the background).

These pix are from 2 years ago, before the drought, the 80 bales moved off the pasture this year were mostly straw. 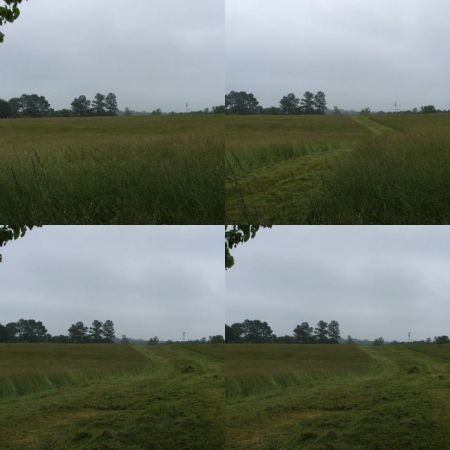 (there are those loblolly pines in the background)

Everybody knows that if it hadn't been mowed, the fire would burn for a week, because there is a large 280 tract of timber right a half mile downwind. 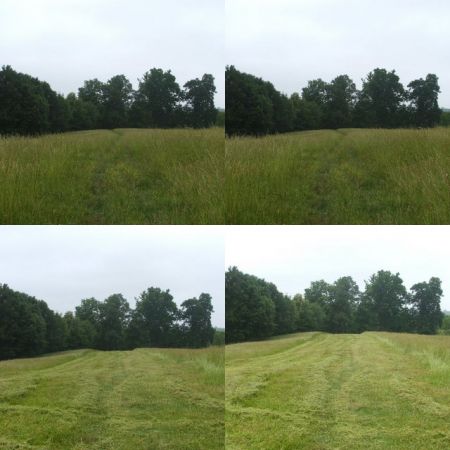 Another coincidence is the baler boys had a Ford truck with a bad fuel pump, left for a week sitting right about where the flames reached.

They had just moved it an hour or so before those birds sh*t fire.
P

That Mocking bird was there for,,, voice lessons.

"And if that Mocking bird don't sing,
papa gonna buy you a,,," 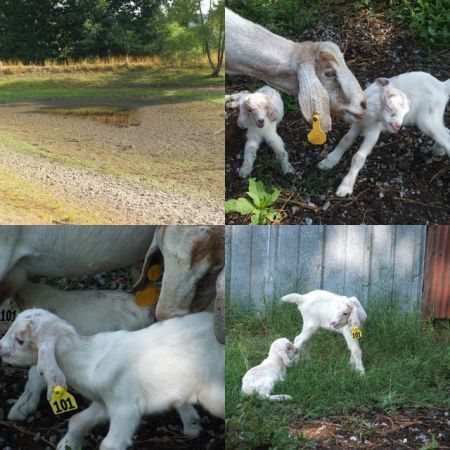 MB.edit lost the eyeglasses, can't
distinguish Preview from Submit.....text is below

Haha.. the upper-right hand pixure..."MoMMM! NO! all my friends are looking."

Black hadn't shown up at the feed bowl in three days, so I knew she had her pups, I had traipsed around looking for her Tuesday & Wednesday with no luck. 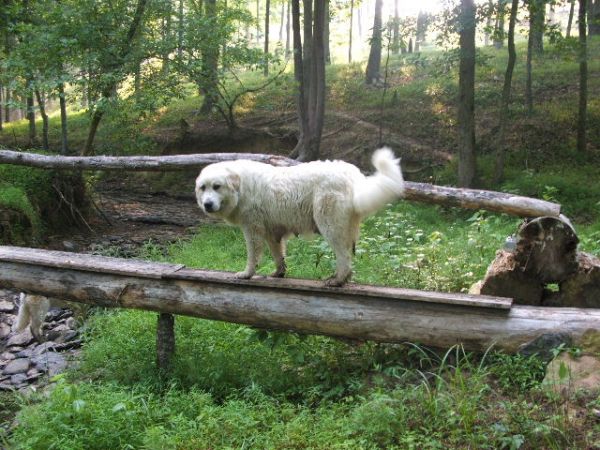 When Blue didn't show yesterday, I figured I better do some serious hunting, make sure they didn't have the litters off the property.

I'd already placed my "Puppies for Sale" ad in the monthly Agricultural Classified, and folks will be calling July 1- me not knowing what I had or where they were at...

HOWEVER, at dawn I discovered the first two kids born in the summer crop, full moon is at the end of the month.

So Claire got the ball rolling, even though I was looking at 5 others that looked farther along. Tagged and iodined.

Kidding season will be the factor preventing the Indiana trip, have to go on some other long jaunt if the Sun/Moon don't do the gravitational thing on these pregnant nannie...... 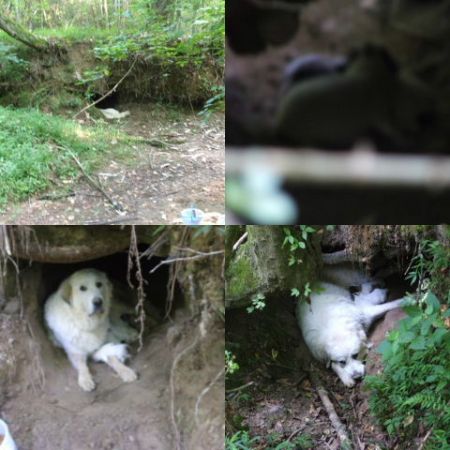 So, I found Blue first, on the creek bottom (took the pix when I returned with food and water). 25 yards away I saw Black, she got the deluxe lair, with front door and back door.

So I grabbed up 3 pups from the large litter, and Black didn't bat an eye when I evened out the load to 6/5, in fact nudged one with her nose over to the buffet line.

I'll find out the sexes in a few days.