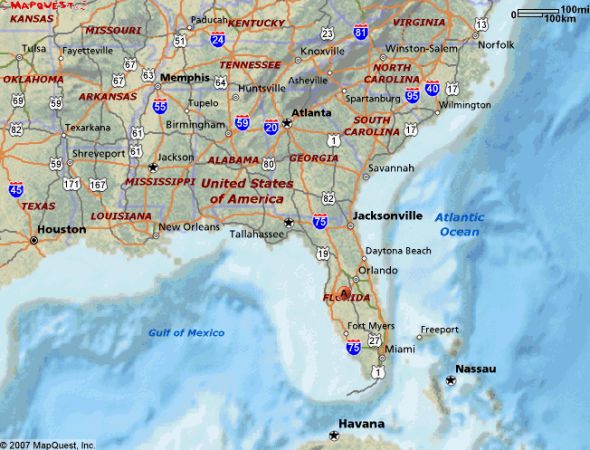 So here's a broad view of my stomping grounds, in an effort to include Bama (or do we call him BBG?) in the mix I zoomed out quite a bit. Still, you can see a few things here...

Let's keep in mind that I've never done any real touring, longest runs were about 50 miles round trip.

I'm located at the letter A that partially obscures the word Florida. My first planned long distance ride is going to be to Orlando. I've figured out that route pretty well starting with the Van Fleet trail and heading west at a cross Florida connector. I figure about 100 miles or so for a single day trip.

This is just a start though. I hope to follow shortly with a trip up to Ft. Myers and a ferry ride to Key West. Eventually I'm shooting for a trip to Key West entirely on the bike as well as a ride up to Inglis (where you see the hywy19 marker) and then across to Daytona.

After a few scoots around the state I think I'll be ready for some more ambitious stuff, like up to Mobile and over to New Orleans. I used to race sailboats all over the gulf coast and I have huge pangs of sympathy for the Katrina victims. I'd like to see what isn't there anymore...

Large talk from a man who hasn't been far yet but I'm simply waiting on my backordered wheel (next week? I hope!) to start with the Otown trip and MAYBE to Cayo Hueso by the end of summer depending on fundage.

Two weeks ago, a really eerie feeling overcame North Alabama, and a lot of Apocolyptic talk was hitting the airwaves, words like "desolation" and "brimstone".

This was due to the smoke drifting up from the Okefenokee fires on the Florida-Georgia border. We moved from San Jose to Holly Pond in 1971, and I remember a Texas dust storm in that decade turning the sky red for 3 days, but NOBODY round here, even the old timers, ever remembered smoke reducing visibility to a mile or two, for one solid week.

My friend Jennifer is a volunteer fireman in Fernandina, and she spent two 5 day cycles fighting that fire. When you start long distance traveling, along those back roads and visiting those small towns, you "connect", ears perk up every time you here one of those places mentioned in the news. 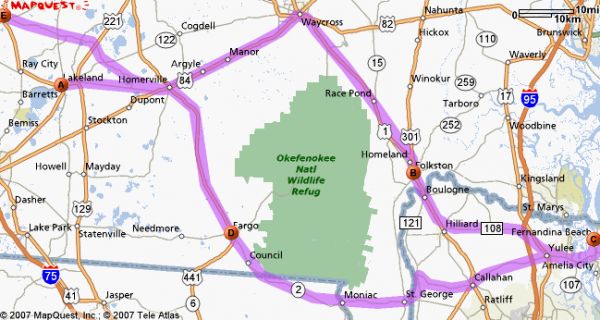 It almost makes you feel like the FIFTH cyclist of the Apocolypse when such calamity hits those folks you've met, and double the trouble when your eyes are irritated from the same smoke they have been breathing. 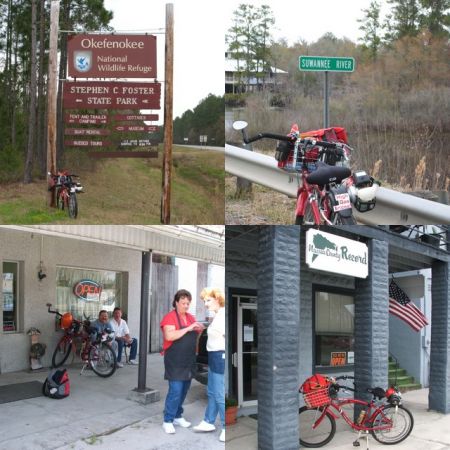 I had such a great time for an hour in the only cafe in St. George, FL, pictured in the bottom left. The editor of the little paper in Callahan was a ditzy redhead, one of those ladies with a pencil sticking out from her frizzy hair, and she was laughing the whole interview, asking some of the WORST questions ever.

It was sad to hear about their plight, just like it was about the blizzards in Colorado last winter, hitting other towns along that route.

I'm an old Boy Scout, so fire is my friend (especially in March), but BE CAREFUL WITH FIRES. 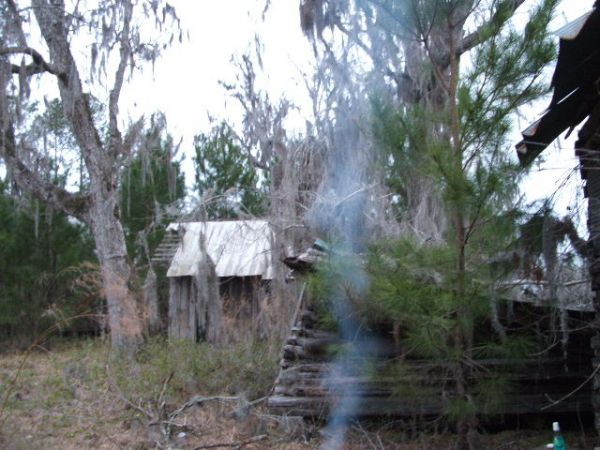 Build the small Indian type fires if you must, but make triple sure they are completely extinguished when you leave.

That is my safety sermon for the summer.

IMHO...I hardly ever build a fire any more... most National Forests have "Burn Banns" in affect in this end of the country... I bought a JetBoil stove... small sized, lightweight, and a super fast boil time... have used it on all my long distance hikes...

BTW... the National Forest System is the un-sung hero for those of us with wanderlust (cyclists, backpackers, kayakers)... "usually" free camping sites, NO CROWDS and the usual amenities < restrooms, showers, etc.)... I use them all the time... just MHO... eLF
L

only white man make fire you can see!

bamabikeguy said:
and she was laughing the whole interview,
Click to expand...

Sounds like she was flirting to me, bama
nice post. you sure do have my envy...with all the traveling you do. :mrgreen:
S

locoWelder said:
only white man make fire you can see!
Click to expand...


Yeah but its fun!
P

Long trips sound like saddle soreness to me... IF you ever passs by Delray, let me know and I would ride to Miami and back!

B
Hello from Central Florida