late last night ,I went out on the frount steps to grab a smoke and what did I find but a 1 year old full blooded boxer pup, he was covered in mud and junk and all skin and bones.

I've lived here for 5 years and people use the back country here to dump dogs ans cats all the time, and so I did the right thing. I called all my nighbors to see if he was thires . then I called the law and they told me to call someone eles,so this morning he gets a bath and I'll put up posters but I hope noboby calls cause I like the poor kid.

Splashing the wine with all the rain dogs.

Aw. If nobody comes forward ya' got yourself a good lookin' dog there.

Found my last dog walking westbound in the eastbound lanes of HWY 70 (probably THE busiest highway in the area). It was mid-afternoon on the first of the year; one of those "sunny cold" days.
Screeched the Jetta to a halt on the shoulder; she was walkin' the yellow line that separates the "fast lane" from the inside shoulder and the median. In my panic, I'd pulled too close to the median to open the door (it's not a wide shoulder, in any case--and I had 18-wheelers barrelling past me at 90 MPH); I had to crawl over the seats and out the passenger door.

No response from the dog; she trotted on.

"'ey! Dog!" I shouted over the roar of traffic.

So because I couldn't let her walk into the line of fire (IE .. into the war-path of oblivious drivers) .. I took the next logical step--or leap, as it was.

And she bit me. Bad! In fact, she gnawed on my hand and arm the whole journey from tackle to picking her up (and puttin' her in something of a headlock to lessen her "biting leverage") to throwing her in the backseat of my VW.

Slung a handful of choice words, inspected the damage to my digits and wrist, and maneuvered back into the driver's seat of the VW. I turned to get the first real look at her: what a mess! She was a full-blooded chow (I realized this minutes earlier, actually; I saw that tell-tale all purple tongue in the throes of her attack on my arm); black and matted to hell. Skin and bones. Her paws were bleeding and swollen. 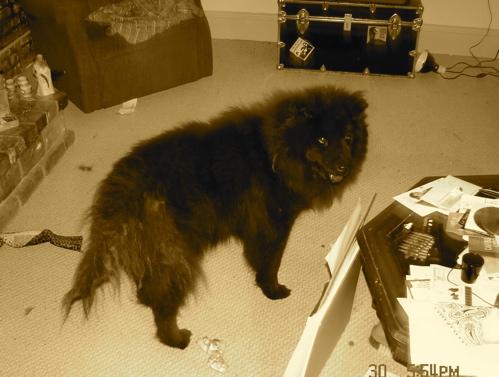 And she was totally blind.

And deaf as a doorknob.

Where she was going or exactly how a blind and deaf dog made it to the inside line of the highway .. I will never know.

But after I fed her the leftover scraps of my lunch, we were like best chums.

She came home with me and slept for two straight days. A vet checked her over that week, told me she was a young dog; just smallish and malnourished--likely spent her whole miserable life tied up in a back yard in north St Louis. We have a big problem with dog fighting rings here--I used to listen to the sounds of the "matches" when I lived in Pine Lawn; it's a gross and eerie thing to fall asleep to, and you can hear the snarls and yelps and human cheers for miles. And while she didn't have the scars of a contender, she was probably purchased as one .. and then ended up an "abandoned project" for one reason or another.

Whether she was turned loose, broke free or was chucked out of the back of a pick-up truck is anybody's guess.

She was my rain dog.

Tralee stayed with me for 3 or 4 months. I fattened her up, gave her as much affection and toys as she could handle, took her on long walks around the neighborhood and let her smell every smell--'coz that's all she could really do .. what with being blind and deaf and all.

It's upsetting and strange to be around a dog that does not equate "human" with "friend;" it's just wrong. People are so frickin' awful.

But, eh .. eventually she got real used to being spoiled. She'd even wag her tail for me; she'd put her chin on my knee and want me to scratch her ears; she'd pay with the neighbor dog (a real escape artist) when I'd come home in the early hours of the morning to let her out and he'd be loose. It was always freezing (Spring hadn't broke yet), but I'd shiver and shake and hop around with her until she was ready to go in.

Came home one night and found her in a bad way.

She'd had a stroke--the vet said she'd probably received some "blunt trauma" to her head, which is what caused her to go blind and deaf .. and left her doggy cranium a ticking timebomb.

Sat with her all night; she was dead by morning.

Some of my chums were headed to the sticks to shoot guns that day; I called them up and asked if they'd take her body with them and dump it (or bury it); it's a lot harder to dispose of a 50LB dead dog in the city than you'd think.

So they took her .. and, God love those drunks, they actually built a bona-fide funeral pyre and burned her until she was gone. Well .. almost.

I got a piece of her back: an ashy chunk of leg bone. 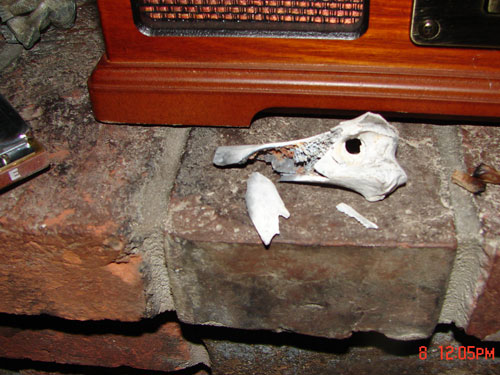 I'll make it a necklace one day; but I need to find a method of reinforcing it, as I don't want the bone to break and crumble in my day-to-day adventures (delicate things don't last long around me).

She was a good dog.

Wish I coulda' spent more time with her; in fact, I'd promised her I'd find a place to live with a yard so she could be outside and happy and not be cooped up in this smelly apartment all day. But .. eh. She didn't wait long enough.

Either way .. I gave her every thing I could.

When I string up that bone, I'll get to take her everywhere; show her everything. 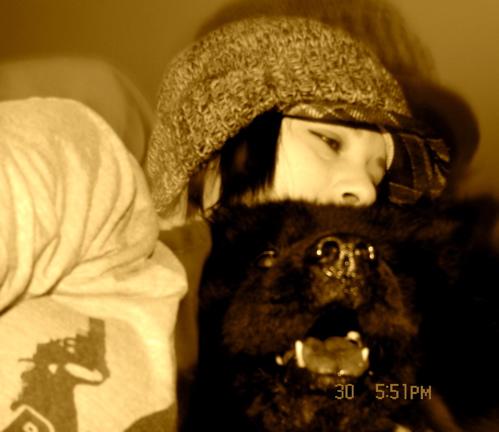 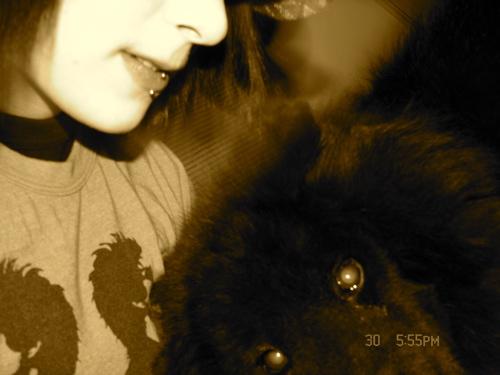 (.. it's hard to get a blind wiggly dog to take a good photo; she's not fascinated by the little blinky light like other animals! )

What else can ya' do?

loco, nashe, you guys are the man for what you did with those dogs. I have three rescued dogs...Cronie (real old) Bubbs (the junkyard guy used to beat him bad because he barked) and my main man Doh Doh (big smelly and I am his bestest friend).

Now nashe, you can either mix up some epoxy, or go to the Wal-Mart and buy some of that decopage' stuff and paint it over her legbone, it will make it very strong and it won't get funky on ya'.
G

well, see if you can figure out why i'd like this topic...

the "rescued-rascal" always makes the best pet, many high-five's to doglovers everywhere 8)
L

Thanks guys! I'm going to post a pic or 2 of Apollo as soon as I take some tomarrow. he got a bath and a vet check today and he is doing great we just waiting for blood work to come back but he's young 1 to 11/2 years old the vet said my 10 year old brindle/lab "Babydogg" loves the little guy so do the kids....so hopfully he gets to stay and the paper ads go unansered........LW
G

This is Cronie...old dog I got from the APL 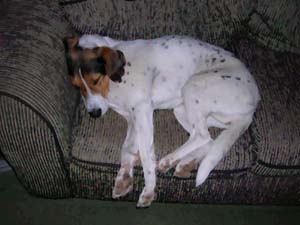 This is Bubbs, the miniture junkyard dog, this little sumbitch is a killer! 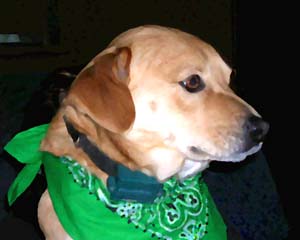 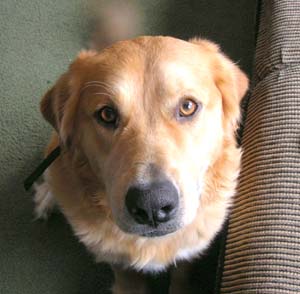