I have been considering getting a greenspeed for a long time. I rode one a while back and they are incredible. I like the idea of the stability of the 3 wheel and everything else. I wont be getting one for a while and in my other posting I posted my Mikes Bike that will be my first dabble with powered bicycles.

I am curious if anybody thinks it would be possible to mount engines on Greenspeed Recumbents? I would also be curious to see if anybody has hooked up a engine to the actual drive train of a bike and made it so they could use the existing levers for shifting and so forth. They also have the internal gearing hub that would be really neat I think to use for motorized as it would not need to shift the chain around.

I love the greenspeed style trikes. The price tag has kept me away....
I've looked at home builts & sketched plans for a homebuilt motored recumbent trike. The only problem I have is the steering. Way over my head!!! :?

I'll bet a Golden Eagle kit would work great on a greenspeed!
L

I was hoping for sprocket vs friction. I do not like the idea of belt.


srdavo said:
I've looked at home builts & sketched plans for a homebuilt motored recumbent trike. The only problem I have is the steering. Way over my head!!! :?
Click to expand...

http://www.greenspeed.com.au/plans.html they sell the plans if you are able to fabricate stuff. I am incapable of really fabricating anything. That might be able to help you understand the steering a bit better? I do not know I have not seen the plans. I would love to be capable of fabrication I just do not know how to weld much less cut the metal properly

here's the one I've looked at. http://www.eland.org.uk/steering.html

I just can't seem to grasp it. I dig the concept. Bents are so comfortable! I have a Bike E. (haven't found an easy way to motor it) hmmmm.....
L

SlicerDicer said:
I was hoping for sprocket vs friction. I do not like the idea of belt.


they have a gear & chain drive also
Click to expand...

I will look into that for sprocket/chain.
A

I have a Whiz Wheelz on order. I'm interested in anything you've learned about hooking a chain drive on a Greenspeed.

Just a few minutes to clear up misconceptions on belts, having gone through the process when GEBE upgraded in late 2005-2006.

There was a major testing as those belts were tweaked, adding strands of Kevlar over a period, I remember when the perfect belt was identified with the right flexibility using "12 more strands".

I carry a few for my customers just in case, but I'm sitting on inventory, have sold maybe three.

IF, right after installation, the belt is centered on the drive ring, AND the only tires that could rub against the belt is the fattest 2.125 (the one I use), the belt will last for thousands of miles.

The first thirty seconds of riding is when the belt "warms up" to the task, any slip disappears quick, and there is NO slippage when the spokering is centered correctly, why the experienced GEBErs are stressing that part of the install. 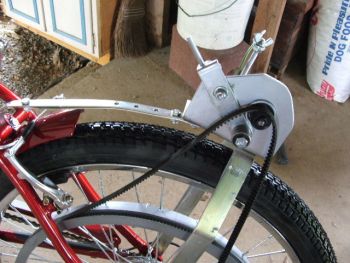 But belts can be abused by not assisting the engine on the steepest grades, especially by the uninitiated. My current belt has probably 3,000 miles on it, not one frayed string. Some of my customers are large, have no problems with the belts.

And there are plenty of recumbents running on them, the only modification being changing to a 120" throttle cable.

Just want to clear up that misconception, heck, Harley's run on Gates' belts nowadays.
A

The Whiz Wheelz has a 20" rear wheel. My impression is that I'd have to modify it to fit a 24" for a GEBE belt drive. I think I'll want to ride it for a while before I start cutting it up.

What Are You Pedaling
2