Hello from San Jose, California! I am a Mechanical/Electrical Engineer who drives a gas guzzling SUV and decided I wanted to do something good for the environment when commuting from my home in the hills to where I work in the flatlands (16 miles each way). I studied electrical bicycle motors for a month before reluctantly discarding this idea due to battery weight and cost for my required distance (SLA, NiMH, LiPoly chemistry).

I then turned my attention to small gas engines, studying the features of chain and belt drive. I settled on the Golden Eagle Bike Engine GEBE EH035A 4cyl engine with belt drive, hoping it could climb the hill back to my house!

Besides wanting to be green, I am also a cheapskate. So, I searched Craigslist for over 1 month to find a $90 bike that met my criteria -
* Front suspension to absorb the big potholes and railroad tracks around here.
* Higher quality than Walmart because I wanted the bike to last for years
* Required frame/wheel clearance to fit the GEBE drive ring.

I found the GEBE assembly to my bike generally easy (since I have a good set of tools). I had to -
* Make a U-bracket to attach the engine to the bike
* Cut the center support and drill its holes to 1/4" (to remove existing plating)
* Gain additional 1/8" clearance for the drive ring by squeezing a steel frame chainstay with a pipe wrench.
* Install a solid axle in place of the quick release axle (REQUIRED!!)

After the first few rides, I changed the wide 26x1.95 mountain tires to 26x1.5 city tires to gain additional clearance between drive belt and tires in coasting mode, and added tire liners and slime to withstand the occasional nail on my commute.

Besides looking forward to spending less money on gas, I think I have reduced my Carbon footprint by at least 150x. 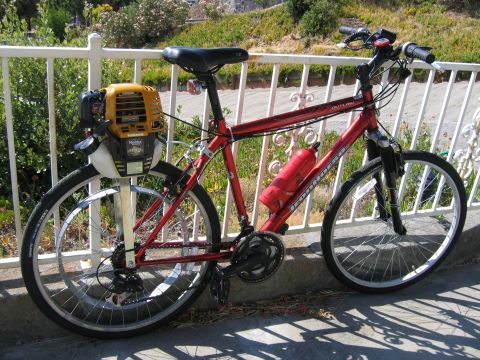 and the U-bracket I made - 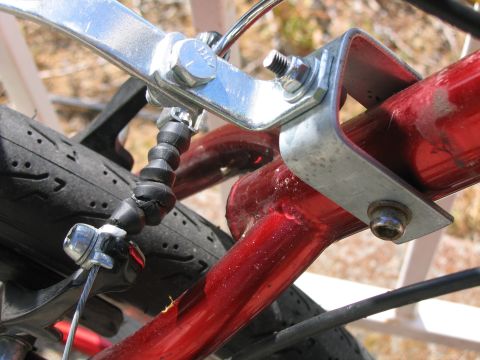 So far, I have found the bike performs well on level and hilly areas, averaging 20-30mph. But, when the grade is very steep (Ex. 20 degree grade), it is pedal all the way (or walk up)...either the belt or the clutch is slipping by design, I think...have not figured this out yet. Oh, and the 0.65 liter gas tank that comes with the engine is REALLY SMALL. I haven't figured out whether to continue carrying an MSR bottle around or getting an ugly gas tank (geez, the MSR bottle is LARGER than the gas tank that came with the engine!)

I am taking the bike to work for the first time this coming Monday!

I didn't find this forum until after I bought the engine. It seems like a nice place to trade information!


7/9/07 Updates:
After riding to work for the first time (32 miles round trip), I have a few observations -
1) With the GEBE drive ring, the bike rear wheel does not fit in a standard bike rack because of the wide drive ring dimension extending beyond the spokes. I have to put the front wheel in the bike rack and balance the bike (I don't have a kickstand).
2) The bike was having trouble with hills that were less than 20 degree continuous grade. I think the main factors are centrifugal clutch design choice and my (total body + bike + payload) weight of about 220lbs. As the clutch wears, this could become more of a problem. At that time, maybe I will ride the roundabout route which is a mile longer but flatter!
3) I have less than 100 miles on the engine and have been riding at varying speeds to break it in. However, most of my first to-work ride today was WOT. On the flats, the bike successfully held at 28mph which favorably compares with the advertised top speed of 27-28mph. The top speed was not significantly affected by head winds estimated at <10mph (I am tall but not a wide person).

Welcome to MBc, Ray! good intro 8) 8) . there's a method to the madness as to why you cant post a pic right away...but since you've made your first post, please feel free to throw it up there in the Picture Gallery .
Happy :mrgreen:
EDIT: oops. forgot about the 24hr wait...

16 miles is quite a way to do daily each way. Good luck and I like your motivation. Every time I see a SUV on the road I think... well, that's a different argument.

I used to live in San Jose, working for a startup in the late 90's, right before the crash. I had about a 5 mile commute and I could make it quicker on my bike than in my car. Good luck.
G

(((I was going to add pictures of the bike here but the website says I am too new to do that...I don't think highly of this website feature...maybe a picture later if the website allows editing of postings.)))
Click to expand...

from our rules and policies, which are appreciated by our established members:

! Our Anti-Spam filter requires that you be a registered member for 1 day and post once before you can include links or pics. We suggest an initial post in "Introduce Yourself" so you can meet everyone. !
Click to expand...

wait a day and just give us a nice post in "picture gallery"...

sounds like you did your homework on the GEBE, we're glad to see more rack-mount riders...our collection of info on them was pretty slim til just lately.

welcome Ray from San Jose! Glad your here! i used to run the colonade apartmnets across from san jose state! i wen't to Menlo Atherton High! lol
How cool...i became an apartment manager because the comute was such a drag, now i live in pacific north west...good luck on your endeavors and happy motoring~

I was born and raised in San Jose, Selma Olinder Elem (EastSide near WilliamsStreet Park) and then moved to Heppner Lane (Pinehurst) in the JohnMuir/Pioneer High District.

Still have relatives out there, and the Atkinson Estate property is a park on Uvas Creek south on Croy Road, below Svedal.

Sounds like a cool bike. That does sound like a long way to go though. Too bad you found out about the web site after you built the bike. We could have helped. Can not wait to see pictures.