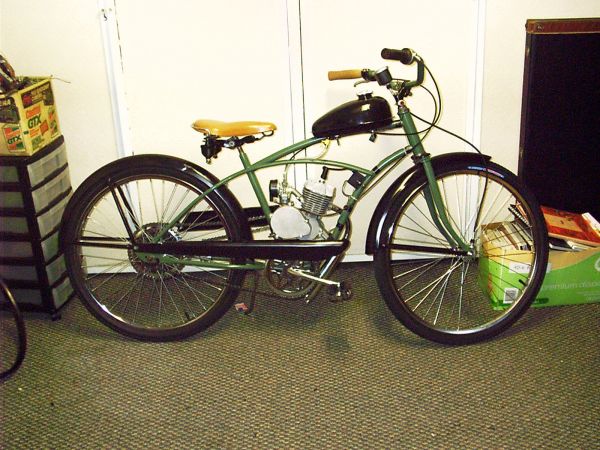 Here it is. Still haven't got a chance to ride it due to Michigan's schizophrenic weather patterns. Less than two weeks ago it hit 81 degrees, and this morning when I left the house at 5:30 it was 25 degrees. Go figure. If it hits 40 degrees tomorrow I'll get it going.
Anyway, I believe the frame and most components were manufactured by a company out of Plymouth, MI called Evans Products. There's a good chance I am mistaken, but this is where my homework has led me. They bought out a bicycle company sometime in the fifties and began producing bikes for department stores for a short time. Each store would affix their own decals and brand name on them and sell them. I bought this bike for five bucks from a junk collector man named Les who lived in the apartment below us, and most of the decals were faded so badly I couldn't make out the name. Alot of my deductions about the manufacturer were based on the chainguard style. If anyone has any more info or if I am completely full of crap let me know.
I took it all apart and stripped all the old paint off and went to work with the rattle can. All of the parts, once cleaned up, were in good shape, save for the grips, pedals, and tires. These I replaced. This bike is considered a middleweight, not quite a balloon-tire bike, on account of the 26"X1.95 tires. I ended up buying a new set of rims when I got my motor because the rear hub of the original was way too big for the drive sprocket. The original rims I had painted black, and looked good, but the chrome ones are growing on me. Also the good thing about new wheels is of course the stopping power of a new coaster brake. Comes in handy.
The only other thing I had problems with was the positioning of the stock motor mounts. The angles weren't matching up so I ended up fashioning the front motor mount out of a hockey puck. It seems okay thus far, the motor is holding very tight, but we'll see when its actually running how bad the vibrations shake it.
So that's it for now. Warmer weather must come eventually. It just has to.
Click to expand...
M
Written by

Yes, that is indeed a Colson-Evans. In storage I have one like it. I love the chaingaurd on those; I robbed mine from the Evans for my '38 Elgin twinn project. Coolness- moto on a not too common bike. Very Nice...
B