Carby I bored the jet on a china carb

Let it be known, I have an extra carb, or 2, so this wasn't too risky for me. 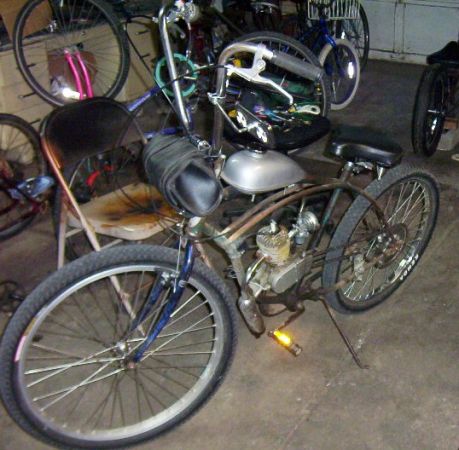 After patching Rusty's rear tube, a new plug, some fresh fuel & a good once over on the whole bike...Rusty started easy, but was sorta sluggish after 3/4 throttle. So.... all the talk of boring the main & only jet sounded appealing. I have a set of tiny dremel bits. diamond encrusted...abrasive, but tiny.
the smallest one..no, I did not use the dremel..went through with gentle twisting. the hole looked big compared to the pin hole in the one not tampered with.
I put my new jet in Rusty's carb and had a ride. Rusty would run wide open, with some episodes of bogging down.
Prolly fast enough...but... I raised the needle to the 3rd notch from the top and away we went.........
At this point, I lost a little bit of take off, but when Rusty wound up...he really screamed! (I swear at one point he screamed "GET OFF ME, YOU FAT B#%*&@!!!!! what are you trying to do...kill both of us?"
I was really impressed. the stop light by my house was green, so I decided to go to the country mart 1/2 a mile away & use the ATM. When I got there...i pulled the clutch lever & had nothing. I looked down and the clutch arm on my engine was gone. I didn't stop...went back to the house and swapped bikes.....went back to find the clutch arm...no luck.
but I did find one of Rusty's motormount studs. yup, vibrated one of the engine studs out too.
Rusty was flying!!! I'll bet I was doing every bit of 35 mph!!
I know this is not very scientific....no exact sizes, I just got lucky. I'll know more when I get Rusty back together.
G

Maybe you could list the drill bit size you used so everyone who wants to do this mod will know what/where to buy it.

I'm glad you took the "chance" with my suggestion....I've done it on other bikes/scooters before with great success.

I don't know the exact size of the bit. There are no markings on them & I don't have a micrometer.

so how did u shut it off when u got home? and how did u ride it back if ur motormount was broke?
G

Anyone else gonna try it? Come on, you know you want to. Even if you really screw it up, you can buy another jet cheap.
J

not really but thx for the offer
G

Didn't you drill out something else? Or was that someone else?
J

my bike is for crusin not fot extrem modifications
G

Drilling the (right) orifice is not and extremem modification, it just helps the bike run better at WOT....

What carb do I get ? Urgent help needed !