Hey all so I took the motor apart down to the jug to put some RTV gasket maker because it was spewing oil mix in the front near the exhaust I put a little grease in the tube for the piston put the gasket sealer lightly tightened then waited to come back and fully tighten down bolts. And the only other thing that's noticeably broken is where the carburetor connects to the manifold and where u tighten it down with the screw ring thing well one of the 4 pieces broke off but I still got it somewhat tight so it doesn't fall off. But the issue is when I dump the clutch to get going at first I had to pull throttle wot and it would fire up but then it wasn't responding to the throttle so well so I killed it then tried it again and I almost wrecked due to the bike wanting to take off WOT and that time it was hard to kill the engine my kill switch was doing absolutely nothing. Please help need advice

The throttle cable probably is held up by the grip or the carb, just give it a giggle and see if it drops back in.

jumpjr619 said:
And the only other thing that's noticeably broken is where the carburetor connects to the manifold and where u tighten it down with the screw ring thing well one of the 4 pieces broke off but I still got it somewhat tight so it doesn't fall off.
Click to expand...

Seeing as you stated nothing about having this problem of WOT situation happening before you tore it apart for adding RTV to the bottom gaskets but did break one of the 4 crbuertor hold down tangs I'm going to suggest what I have written below.

With that piece broken on the carby, you more than likely have a massive air leak resulting in extremly lean running condition which would give you that WOT affect...replace that NT carby you snappped with this one shown below...Those four tangs are much beefier than the ones on the basic kit NT carby that broke off on you...Also be sure to use the O ring that is supposed to come with it...It fits into the carby where the intake seats itself into the carby and seals itself against the O ring...If The new JRL BoFeng carby doesn't come with that O ring, go to your local autoparts store and ask for a Viton O ring that will fit into that orifice...(Pic below where that O ring goes in).

Did I forget to mention it's cheap at only $11.99 at Amazon???...It also runs smoother through all throttle ranges than the stock NT carby as well...lol.

This is the orifice where that O ring needs to be in to seal it from air leakage. 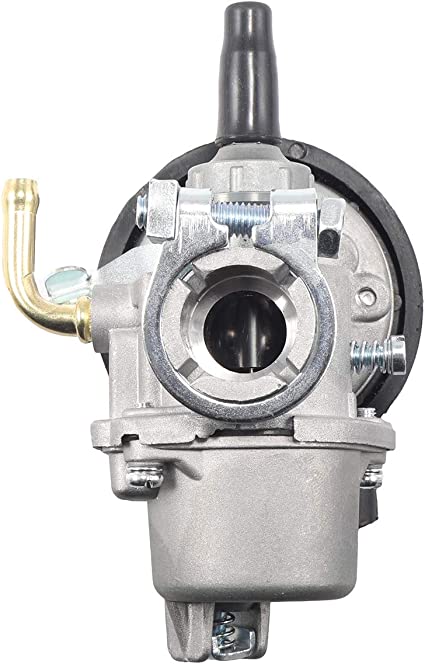 Ps, Also check that throttle cable like Chainlube previously mentioned as well, but definitely get rid of that broken carby as I believe that is the real problem here...It needs to be perfectly sealed from any extra air being sucked causing WOT and extra lean running condition in like what is probably happening because of that broken off hold down tang.

Chainlube said:
The throttle cable probably is held up by the grip or the carb, just give it a giggle and see if it drops back in.
Click to expand...

Chainlube said:
The throttle cable probably is held up by the grip or the carb, just give it a giggle and see if it drops back in.
Click to expand...

Didn't help but thanks for your advice......any other ideas would be appreciated

Is the carb barrel in right? There is a slot that fits a certain way to keep it from turning.

jumpjr619 said:
Ok so I've replaced the carb with the speed carb and put a new fuel line on and when I went to test it all hell broke loose I almost wrecked but I finally got it to slow down by putting the choke on so I just got done putting it back together after putting new gaskets EVERYWHERE except the one that u would need to split the motor in half to replace but now the clutch isn't as tight as it was before and also it's making a super loud squeek when I dump the clutch to better explain it u know how u have to pull the clutch to get the bike to tire to rotate freely ya well it is loose enough u don't have to pull the clutch I have no f***ing clue what to do now please help
Click to expand...

The clutch sounds like it simply needs to be adjusted a little or the pads are so worn you need new ones. The squeak you hear is the pads slipping. That would also explain why the wheel spins even with the clutch lever released.

D
Engine starts up, but when given throttle, it bogs.