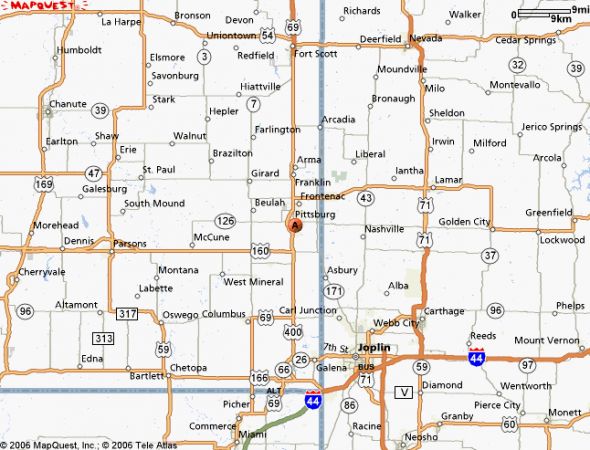 We have lots of backroads, most lead to good fishing. We also boast having some of the best Fried Chicken in the country!! Missouri is 5 miles east of here & Oklahoma is about 40 miles south.

KANSAS- Monday morning I awoke about 70 miles into Kansas. It looks like I didn't get anywhere near srdavo, Kansas is a pretty big place.

According to my MAPQUEST (Tom, a potential sponsor who should pay DEARLY for me to "endorse" ) Since this is the first "travelog", I'll probably have to edit many times, but my satisfaction with MapQuest is not "etched in stone", rather "peppered with birdshot".

A trend seems to be unfolding, I am spending about $3 per day in gas, and $6 a day for LARGE buffet lunches. I'm better prepared than my March trip to Daytona, Florida, but need to find less bulky pants and lighter layers of sweaters. The road and weather conditions in Kansas are very variable.
The concept of "sweetened iced tea" disappears on Monday, and so do higher octane gas blends. Somebody needs to holler at those damn political know-nothings shoving ethanol down our tanks, ALL engines vapor lock if present day concoctions are the best they can do.
So the route I planned to cut up to St. Francis, Kansas is going to be due north, due west, due north, due west, etc. The only historic town I want to see is Council Grove, where the Santa Fe Trail really crossed the point of no return, into the hostile territory.

Metal sculptures started appearing on occasional hilltops, depicting various tribal and pioneer scenes. I saw 6 of these displays over two days, the most poignant was the defeated plains warrior, broken lance leading a wounded horse.

Council Grove, at the end of a scenic 2 lane highway, was full of school buses, the newspaper editor who wrote the first story about my 2,000 mile stunt said historical tours were a constant daily occurrence.
So, with so few trees, it seemed natural to find the stump of an oak tree that served as a mail drop for nearly twenty years, and later this was THE important junction point for the Pony Express. 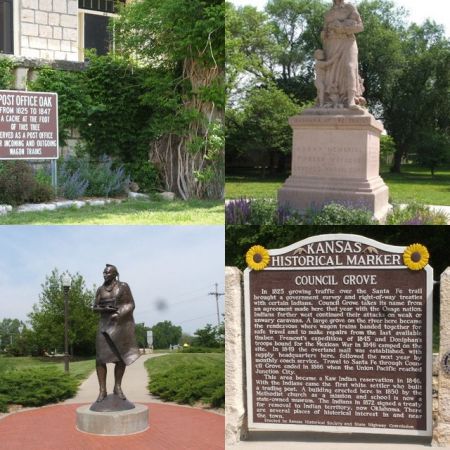 "Madonna of the Trails" is a monument to the pioneer women. The close-up look of the terrain a bicycle allows (as opposed to zipping past in a car), gives a person more respect for pioneer perseverance.

Towns are spaced 30 miles apart, the distance a horse/oxen team could travel in a day, some of the creeks and rivers have carved deep gorges wagons had to maneuver around. A park with trails, museums and the actual spot wagon trains crossed the shallow ford lays behind the tribute to the Osage Indians (who eventually got royally shafted due to the Council Grove Treaty).

I had noticed both Kansas and Missouri had "Noxious Weed Departments" attached to the regular highway maintenance sheds.
The roads were extremely LITTER-FREE !! As I talked to other tourists about the cleaner roads at one rest area, a small whirlwind took a load of lightweight paper southward. So either Alabama roads are full of Kansas gum wrappers, or they just respect the scenery more in the Midwest.
I saw massive fence systems, but no huge herds of mostly black cows. It is not the grass, but the lack of water which keeps pastures open, and feedlots are the moneymakers for livestock.

The most picturesque area was the "Konza Reserve", thousands of acres south of Manhattan KS, which Kansas State University maintains. It requires special permission to enter, because of the fragile archeological and biological sites. The Kaw tribe grew crops there for 150 years, until settlers stole both the land and the corn strain the Kaws had developed.

Manhattan, and some city in Nebraska, were original Arbor Day participants, creating an oasis of trees.
My first notice of "High Plains Winds" was actually a 25-35 mph tailwind that helped me Monday afternoon. I rode it like a wind surfer westerly as long as I could, camping 20 miles south of Lebanon, KS. 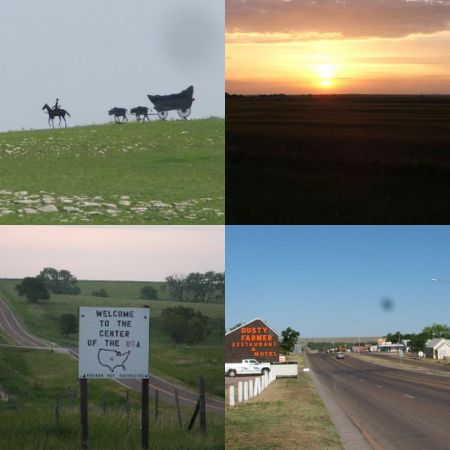 Tuesday morning I arrived at the Geological Center of the US around 7 a.m., snapping pictures of huge fields of wheat, about waist high when irrigated, knee high when not. (Drought conditions will play an important part in the return leg from Denver, after my Memorial Day spent in the Rocky Mtns).

Exiting the small park around this hilltop reference point, a sign pointing north tempted me with my first navigational error of judgment. Spoiled by yesterday's tailwind, I thought I had made up for the "day late start" this trek had begun with.
(Since this travelog is out of sequence, in the Missouri chapter I lament leaving a day LATE, wanting to watch Barbaro win the triple crown. My winnings from that wager would have paid for my trip. The Dylan 65 concert I'm headed to is Wed. night, but I was supposed to be there for soundcheck/rehearsal on Tuesday).

So off I went to Red Cloud, Nebraska, named after the only undefeated Plains chief, home of prairie writer Willa Cather, a charming town with brick streets. Farmers live in town, commute to their property, all revolving around water supplies. I met a father and son peddling up hill to the state line on my way into Red Cloud.

Right on the state line is another nature reserve, named after Cather, thousands of acres on the left side of the road which do NOT require special requirements to explore.

I gassed up, did a newspaper interview, bought postcards, checked for "octane booster" (this octane thing is unfamiliar to "bama", but wind and altitude also needed adjustments), yada, yada, yada.... and when finished, the father/son pair finally caught back up to me as I smugly exited town due west. 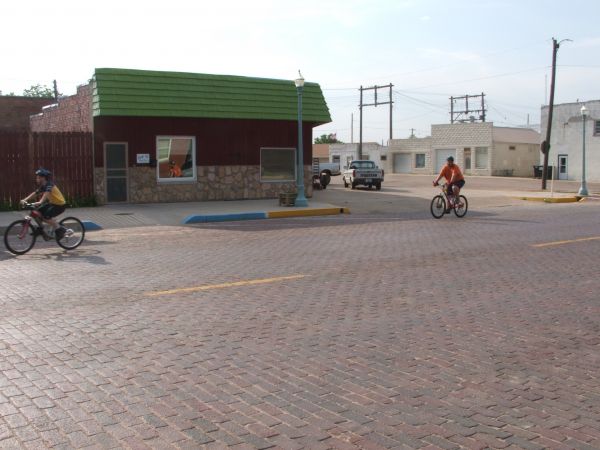 West to Alma, THEN, when I headed due south, over the Republican River and uphill back to Kansas and Highway 36, a 40 mph gust of wind hit me in the face.

That's how the Dakotas were settled, the wind blew the wagons straight north. This headwind, and my basket full of wind-resistance, not only slowed me, but massive hog farms were all upwind. Up until this point, miles of dairy herds, or wheat fields, or fenced pastures, were replaced by a smell that was constantly coming from these industrial swineries, screened by a "windbreak" of cedar trees, enhanced by trailer loads of waste passing me on trucks headed my direction.
Put this occupation on a list of things "Americans won't do", immigrants, illegal or not, are doing the heavy lifting in beef, pork and poultry.

The second part of the doomed Tuesday happened in Norton KS. Highway 36 is the shortest distance between Indianapolis and Denver, a real easy roller coaster ride. UNLESS A CONVENIENCE STORE CLERK MISINFORMS A POOR TRAVELER.
I zeroed in on the first gas pump that claimed "91 octane", because High Plains denotes elevation in the 4,000 feet range, (ergo no more dead armadillos, which were 2 per mile throughout Missouri to Manhattan).
I asked her THREE times if the "premium contained ethanol", and the clerk said "NO label means NO ethanol".
I filled my spares with what I thought was enough of the good stuff to get me way into Colorado by evening.
I poured it into my tank in Oberlin, and then hiccupped all the way Atwood. There, a small engine shop owner said vapor lock could be lessened with a couple of well drilled holes, which motorists do rather than install expensive measures.
Gas companies know the problem exists, the crafty farmers have co-op tanks, available 24 hours, full of "good gas", operated by credit cards, immune to the "ethanized" fruit punch the tourist is trapped into.

Gas stations are few and far between, and the rare major brands might appear a hundred miles apart. DO NOT TRUST POLITICIANS AND AGRI-BUSINESS CONGLOMERATES ON ETHANOL, ASK THE KANSAS FOLKS THAT GROW THE CORN!!

The whores in Washington are in the pockets of agri-business, the "subsidies" are a kickback not getting to the actual farmer. Later, in Oklahoma, I found entire towns that banned ethanol, because there is no consistency from one distillery to the next, and watered down ethanol is another big oil profit maker.

Bio-diesel is another matter altogether.

Tuesday sunset saw me in "Saint Franny" as the locals call it, poised to hit Colorado, but too late for Tuesday night rehearsal and sound check in Denver.
Starting a day late, rudely introduced to a wind which caused all the trees in Nebraska to lean left, and the ethanol deception in Kansas made a rescue necessary.

The bike in the back of Dewey's jeep early Wednesday morning, traveling the last 140 miles at 110 miles per hour, a reggae Dylan type of ride.

I thought that 'last chunk of the journey would have been a breeze if any of those three circumstances, the late start, headwinds at the Republican River or that dumb Norton b**ch with her watered down gas was subtracted."

However, there IS a clue in that last paragraph, the fact that I DID NOT RIDE ON ROCINANTE FROM St Franny to Denver, 140 miles of a graded incline that I presume rises from 4,000 to 5,000 feet, or whatever a "mile high" measures up to out there. This will come into play when one of the Colorado members posts his map..........

Scam heads up for ALL vendors with web site contact forms.