I am curious if there is a market for 4 stroke kits ( center of frame type, not rack-mount)
also wondering whether 2 strokers will convert if/when parts become scarce
it seems to me that it would appeal to a bigger audience (ie: not so mechanically inclined) if there was less hassle like mixing fuel n stuff, as well as the reliability 4 strokes have the reputation for

cummon now.. 18 views and not a single comment or vote ??
I am thinking about why havent they done it in the same way as 2strokes
If I could get a 4stroke that worked and looked similar I would buy it if it was reasonably priced
D

I would jump on a 4 stroker that could apply as much torgue and still be legal. I agree also that I would like the lower frame mount. You also have a lot less vibration.
So I will vote 4 stroker in form wished above.
Brian
F

I would buy a 4-stroke if they could make them as powerful as the 2-strokes. I've had a couple in the past with mixed reviews. On one hand, I had a Honda Elite that would do almost 50mph(80cc), and a couple of Chinese 50cc's that wouldn't even do 25. Being a little bit of a mad scientist, I am half tempted to try my hand at copying the 2-stroke castings, step up for a metal lathe, and produce my own pieces/parts(maybe even complete engines). Maybe 2-strokes can't be imported anymore, but that's not going to stop all the resourcefull scofflaws out there from making their own.
IMO, the powers that be are using emmisions and pollution as excuses to make it impossible to own a vehicle that can be driven without undue taxes, registration, insurance, or any of the other rackets that the government uses to stiff honest citizens out of hundreds of dollars per year. They will outlaw 2-strokes, making everyone buy a 4-stroke of equal size. I think they figure that everyone will be so dissapointed by the almost un-streetable lack of power that the 4's offer, and give up on motorbikes/scooters alltogether. This will force them to start driving cars more, and thus paying more taxes, insurance, registraion fees, etc.
Not me though!
I will be happily operating my "bootleg" engine shop and will never run out of 2-stroke parts!
J

If a 4-stroke could be as powerful as the 2-strokes we use now, I would totaly make the switch. But ONLY if.

The idea of stopping and filling up without mixing oil in is really tempting...

less vibration, that i know. 4strokes (motorcycles) for me have always been more reliable. i'd like to know what difference in torque there is between the two.
U

Whizzer. High quality casting (aluminum), 4-stroke, 148cc, Flathead, belt drive. The NE-5 are the best ones as the earlier ones ('99-'04 WC-1) had some design flaws which were remedied in the 2005 introduction of the new engines (NE-5).
Remove the restrictors, and try it out; you'll not go back... 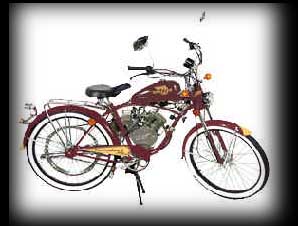 That's a stock Pacemaker 2, but they do sell just the engine kit w/ everything you need to mount it on your own bike.
I love 'em!
Well, okay anything with two wheels and an engine gives me a kick, but i'm partial to the Whizzer, as I find it to be the most fun, and has better power.
I dig my little chineses engine, but I don't like having to mix the fuel, and carry extra if I go for a long distance jaunt.
The down side:
Whizzers cost more, they run about 600.00
and that is why, IMHO, the smaller chinese engines are not only so popular, but also a great introduction (and still a great kick in the pants to ride as well) to this great hobby. Replacement parts, accesories, and such are more expensive with the whizzer as well, but there's less engine maintenance so...
They are also a lot heavier than the chinese two-strokers.
Fuel economy is less (but still better than any car!)
and they need to be licensed as motor driven cycles or light motorcycles in most areas.
But to me- they are the dusenberg (did I spell that right?) of motored bikes...
Keep on keepin' on fellas!

Two stroke will not be outlawed, just the importation and sale. You can and will always be able to run what you have. I wonder if that cover model aircraft engines as well? They run a different fuel.

I was amazed when I went into Wal-Mart yesterday and all the new mini tillers, weedwackers and chainsaws all had the little "bump" on the top of the head. (rocker arm cover) they had a few "old" two stroke weedwackers for 39 dollars.

I spent the rest of the day imagining a world where chainsaws and weedwackers went brrrooom brrrroooommm, instead of ying dingdingdingdingding.

I would buy a four stroke bike engine if the prices level off at reasonable.

Two stroke will not be outlawed, just the importation and sale.
Click to expand...

That is what I meant by "outlawed," sorry if I was unclear. I used the term outlawed because banning the import and sale of the engines and parts will effectively be eliminating people's ability to drive and maintain 2-stroke vehicles.
As far as the Whizzer goes, it's a neat bike with a ton of novelty value. The fact that it is a flathead/side-valve motor is a real "blast from the past." I would love to own one some day, but it doesn't really fit into my budget for the time being.
I wonder if there can ever be a compromise between 2-cycle power and 4-cycle emmisions. I'm sure that one of the chinese companies can produce a 2-cycle with a cheap catalyst unit built into the exhaust(like many European 2-cycle scooters). Or build one with an internal wet-sump oiling system(like the old 2-cycle diesels). They would still burn some oil, but would not be a "total loss" system like current 2-cycles. These features might make the motors slightly more complicated/expensive, but not nearly as much as a 4-cycle with all of it's extra parts(valves, cam, timing, etc.).
The other possibility would be to make a 4-cycle engine kit with a 10.5:1 or 11:1 compression ratio that could run off of the new ethanol/gas blend fuels(E-85 is rated at 105 octane!). This would give a very clean-running engine that might actually have some power. 3-valve heads(2 intake, 1 exhaust) and a little more cam lift might help also, and could probably be made without much extra cost.
W

The Crash Course for MotoredBike NOOBs
2 3 4