MISSOURI---->Show Me Daves other map

Bama,
I lived in Missouri for 25 years. I hope this map will help.
Dave 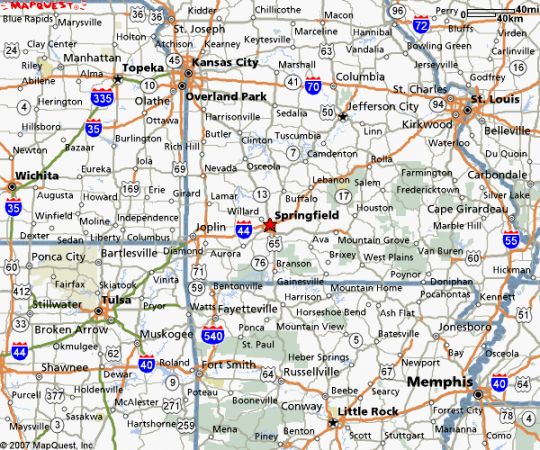 wow, srdavo...i'm a st. louis native & as an "adult" i lived in st. charles, the start of the KATY trail, for several years. small world, eh?

I'm about 80 miles from Clinton....the other end of the Katy Trail

Yeah that helps, because you can draw a line from Kennett, Mt. Grove, Buffalo and Nevada, and thats how I zipped through!

Thanks, and I'll get my Mark Twain forest episode on here next week.

did you happen to cross into kansas at Ft. Scott? I was born there. And pittsburg is 30 mile south

that line from kennett to nevada is pretty straight. betcha didn't find many straight roads on that stretch of your trip.

Not only great roads, the longest stretches of dairies I've ever seen. Yep, Nevada, Ft Scott, then up to Ottawa, and a series of 90 degree turns to get up to the NW corner at St. Francis KS.

I went to 1st & 2nd grade at Urbana, mo. (1964) just north of Buffalo.
my Dad hauled milk , in 10 gallon cans, from the dairy farms to the MFA milk plant in Lebanon. Before daylight till afterdark, 7 days a week. Now I can't imagine having to work like that. I don't even like working 5 days a week. lol

HE WHO HESITATES IS LOST 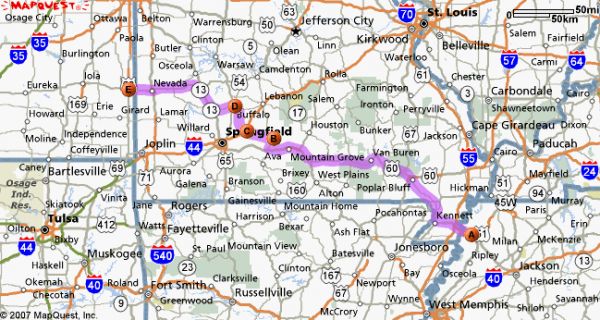 MISSOURI- . A friend in Denver is promoting a concert, rehearsal is Tuesday night, so I was starting a day late. One reason was farm related, two days earlier I had a "breakout" situation in the back pasture, spent a day on fence repairs.

And the second was Barbaro Fever, the Preakness was running on Saturday, and all the hype had me hooked.

Anyway, just east of the Mississippi was my "jump start" point. An easy bridge crossing, wide shoulders in Tennessee continued on into Missouri. 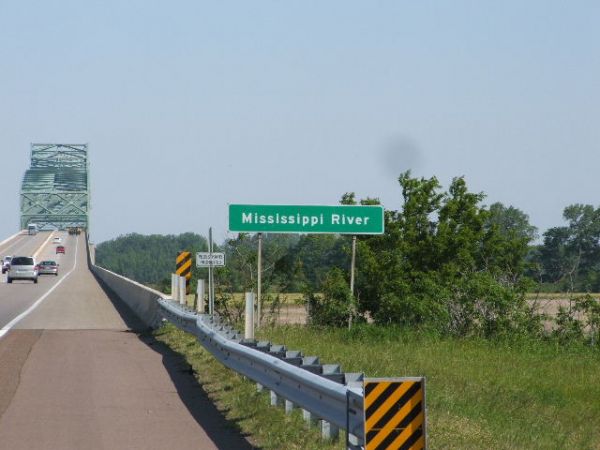 This is also the point where that "black spot" appeared on my lens, making for a UFO image throughout the 363 pictures taken on the trip.

However, by all my calculations, I had to make up some ground, and didn't take a lot of pictures in Missouri. Luckily it is close enough to revisit at some future date, take time to enjoy more of the sights.

Saturday was spent crossing the Ozark Mountains, starting at Kennett, MO. Its flatland until Poplar Bluff. From there it skirts along different parcels of the Mark Twain National Forest.

Two things stand out about that first days ride. One was a flashing "You are going ____ mph" sign on a moderate incline, and my fully loaded speed headed uphill was 27/28/27/28. Not bad.

There really were no steep climbs all day long, the Ozarks are an easy ride. I put the speed to the test racing neck and neck with a freight train for a 30 minute run, keeping up and sometimes gaining on the engine.

I camped out the first night near an abandoned shed, just in case the weather turned wet. I had rode until the last possible moment, trying to make up for that late start. 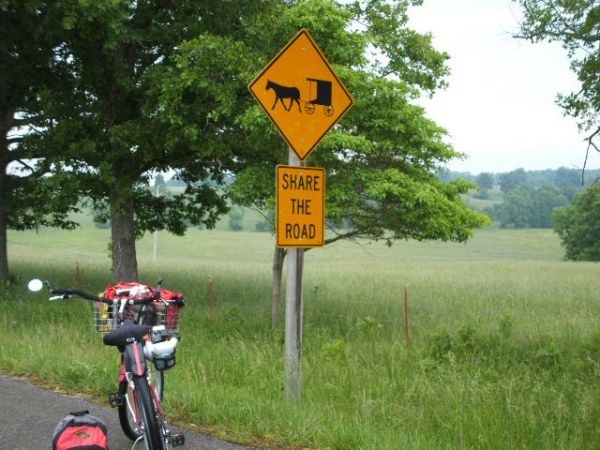 So the next morning, Sunday, I was surprise to find myself in in Amish country, near Mountain Grove. I spent ALL morning hoping to find a parade of horses and buggys on that road, never having been up close to these true idealists. I planned to somehow overcome their aversion to photos so I could get my bike next to the well built carriages.

In the first 50 miles Sunday, I passed more consecutive dairy farms than I have ever seen, surely this area rivals Wisconsin in Holsteins per mile.

The roads throughout the two days in Missouri were a pleasure, even though the dead armadillo count was infinite. The road kill, always important to we bike riders, had a lot of snakes and this poor little land turtle, who just craved some asphalt tanning room. These three species were a constant smashed display.

Highway 60, from Poplar Bluff to Mountain Grove was mostly 4 lane, then Sunday was primarily two lane backroads, cutting an angle up to Nevada.

Again, the Ozark Mountain terrain is really not that intimidating. 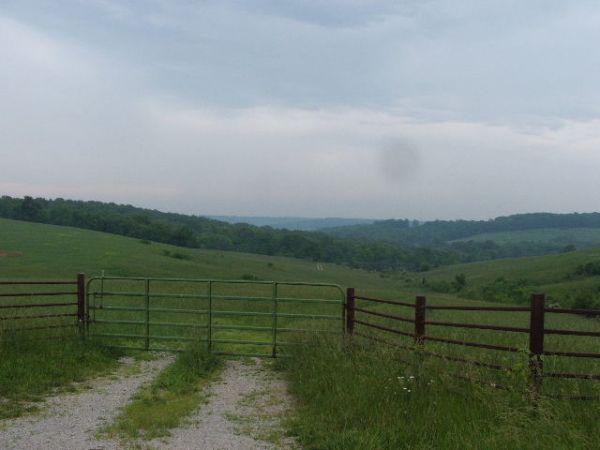 All Sunday morning I had those back roads mostly to myself, as I aimed for the Kansas border. I tried my first Korean-all-you-can-at buffet in Bolivar, MO, (it is identical to Chinese), leaving after 4 plates full at about 2 p.m.

In an effort to get back on schedule, I had only ate energy bars and snacks Saturday, this was my only sit down meal until Monday afternoon in Kansas.

The "Great Plains" begin to appear near Nevada, MO. 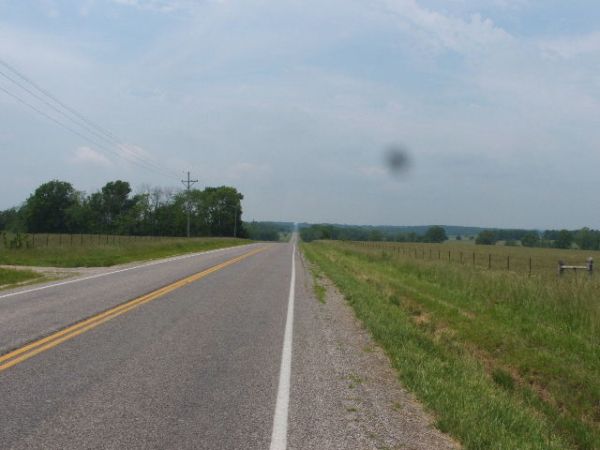 Not only do TALL trees start to disappear, (except around homes and water holes, what they call trees we call bushes and shrubs down here), but the roads start straightening into sharp N-S and E-W angles.

I found out later that the minute the armadillos disappeared, was the moment the High Plains began, but I was still in a hurry headed WEST. 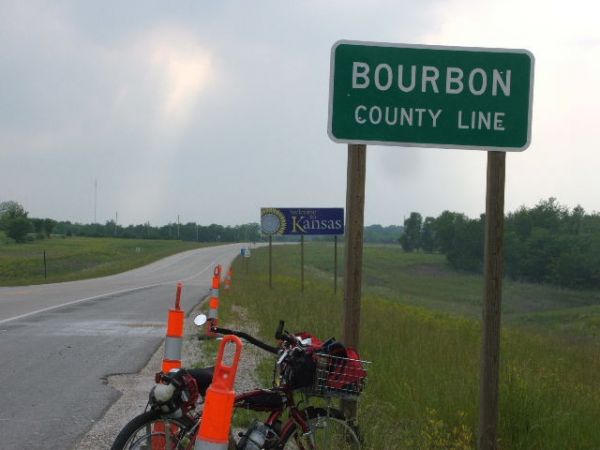 I hit the Kansas flatlands at about 4 p.m., riding straight into the setting sun.
Last edited by a moderator: Dec 15, 2015

Aaaayo from the river city!

Y
Some Success But Also Intermittent Problem Cranking The Pedals.