Motorizedbikes better than motorcycles because...

You buy it- you build it-you break it- Repeat... 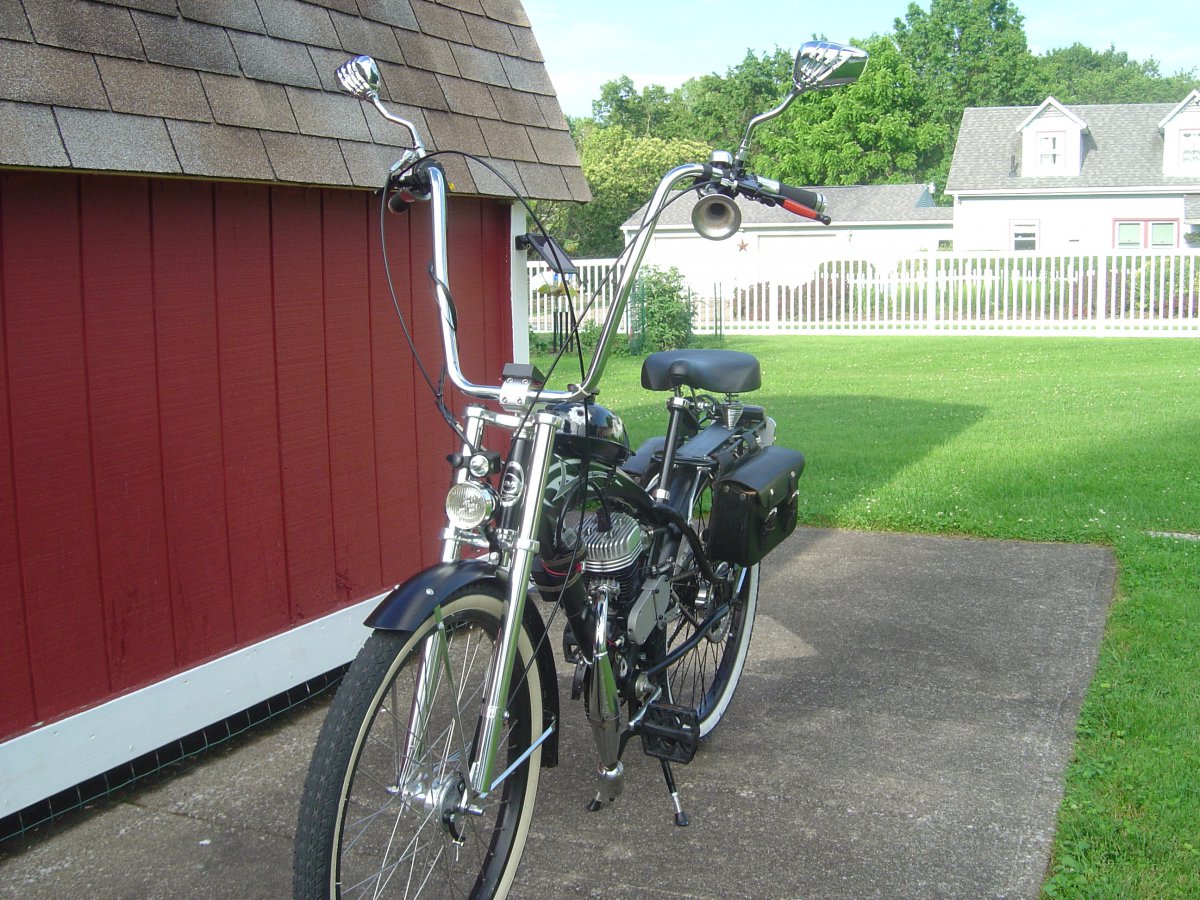 Rat, what a beauty, great craftsmanship too!
D

Hi Rat Ryder...It is a thing of beauty, I hope it runs at least half as good as how it looks...DAMIEN
J

First of all, I am 61, and have been riding motorcycles since I was 8 years old. I have not been without one since. I currently have 2 motorcycles (one street and one dual sport) and a Vespa GT200 scooter. have had 3 motorized bicycles during the past 10 years. They just don't last. and require constant working on. Now, I actually enjoy tinkering with such things, but I don't like them breaking down all the time. I am partially disabled, and it is easy to ride a MB way farther from home than I could possibly pedal it back when it breaks down, leaving me stranded. I am disappointed that there are STILL no quality parts to build a MB with. After all these years, people are still using those total POS plastic and tin chainstay mounted chain tensioners and rag joint rear sprocket mounts. Yes you can get engine mounted spring loaded tensioners and clamshell mounts for the rear sprocket, which I currently have. They are better, but far from what they could be. And the engine is still junk. And they don't fit properly on a lot of bikes. You have to rig almost everything. I wish somebody would sell a factory made MB, kind of like the Whizzers from 20 years ago, only with a 48cc motor, as the Whizzer motor was too big to be legal in my state. I used to be into mopeds, like Tomos and Puch, and they were high quality and never broke down. And they had 2 speeds, so you could climb some pretty steep hills with them. And with pedals, you only needed a regular drivers license in my state.

Another issue with MBs is that you can't climb hills without super low gearing, which makes them worthless on flat roads. For that you have to build a shifter bike. Those are super expensive, and the parts don't fit on so many bikes. Again it would be nice if someone built a high quality bike frame designed specifically for these kits. One of my MBs was a friction drive, and it was by far the most reliable. But it was limited to flat level roads.

DAMIEN1307 said:
Hi Rat Ryder...It is a thing of beauty, I hope it runs at least half as good as how it looks...DAMIEN
Click to expand...

It RUNZ brother. Indeed it does. Thanks for lookin @ it. (carryon)
B

Motorized Bikes can be picked up and carried. That is an advantage over a motorcycle.

JunkyardDog, why don't you sell one of those m/c's and build you a MAB with one of those frames fitted for an inframe build? Put a Honda GXH50 in there w/a shift kit and you'll have a great quality bike you can enjoy and be reliable. Don't cheap out use the m/c proceeds to do it right. Seems that's what your looking for.
You must log in or register to reply here.
Share:
Facebook Twitter Reddit Pinterest Tumblr WhatsApp Email Link
Top