Now that my 2-speed brushless hub experiment is over (for now at least), I finally took the first pictures of my electric powered bicycle. If you saw any of the photos from when I was messing with the hall sensors, you can tell I repainted the hub today. The paint was pretty trashed from being taken part like 3 times. I'll get some new photos of my Nirve Switchblade chpopper posted as soon as I get it cleaned up.

It started out as a Micargi RoverGX bicycle which was only about $120. Then I added the 48v 600w brushless motor kit from Spookytooth Cycles. In the saddlebags are 17Ah sealed lead acid batteries. The whole setup added almost 100 pounds to the bike, so it's kind of heavy now.

Probably the coolest thing I did to this bike was remove all the spokes and the rim from both the electric hub and the bike's original wheel. Then I re-laced the hub motor into the orange rim and painted the hub motor satin black to match the frame. The stock paint and rim on the hub motor would probably go well with most bikes, but it looked horrible on mine. The new setup looks so much better. It's not even obvious that there's a motor on it. The whole thing just looks like it came from the factory like that. 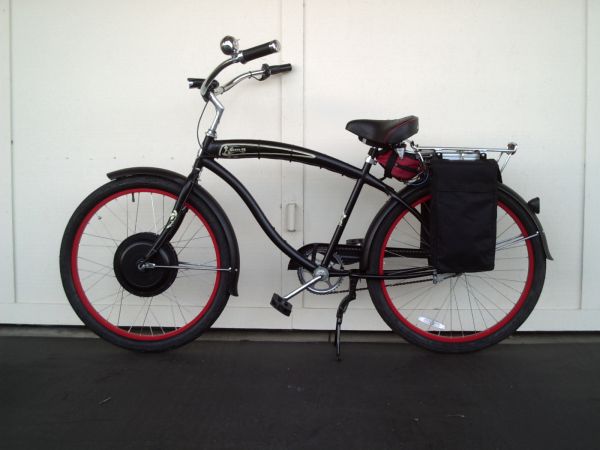 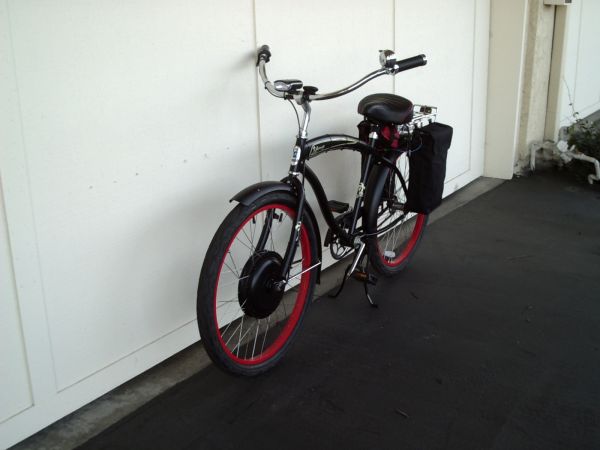 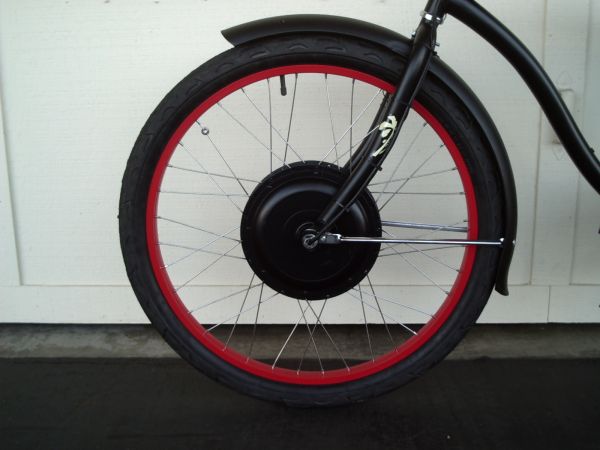 nice looking bicycle, how heavy it the bike anyway? 150 pounds?

blaze thAts hot!!! DOESNT EVEN LOOK LIKE ITS GOT A MOTOR VERY CLEAN. whats the speed on these electrics . been checking them out on spookytooth may be next project thinking about it larry ca
A

Nice bike Blaze. A bummer that 2 speed experiment didn't work out, I would have like to seen it work.
B

Thanks for all the comments, guys.

This one has about a 17mph top speed, with a 21 mile range (some hills, no pedaling).

I'm not sure how much it really weighs, but around 150 pounds sounds about right.
S