my Hardly Davidson is done

I finally finished my latest cruiser. Well, not quite finished yet....still waiting for my local decal guy to make me some "Hardly Davidson" decals for the chainguards. This one has a Power King 80 engine, but I engraved 48cc on the clutch cover to keep the cops happy.....and from what I've been hearing in here, it sounds like 48cc is a bit closer to the truth than 80cc on these Power King engines anyways. I haven't tried it out yet, but I plan on taking it for a run tonight. I hope it runs as well as my Dax 70. 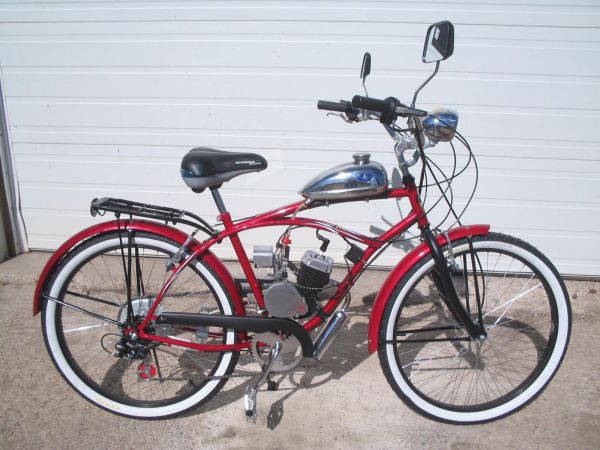 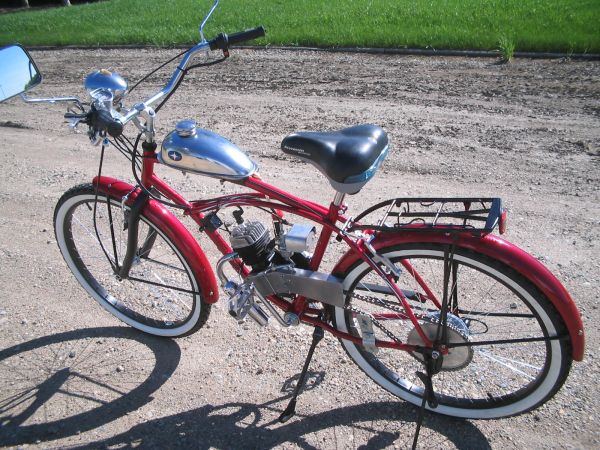 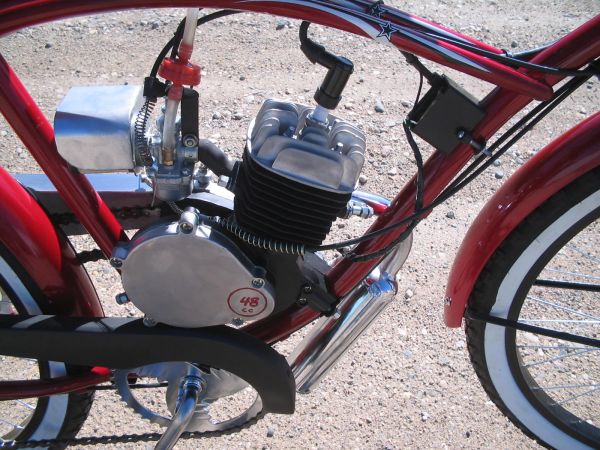 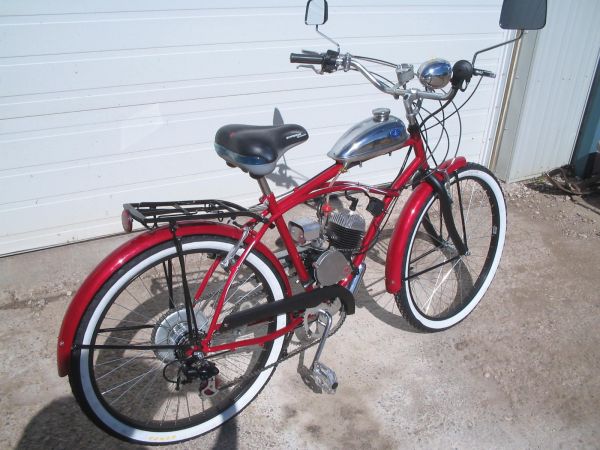 luke_mcmahon85 said:
how do you bend the sheetmetal?
Click to expand...


I'd luv to say I had one of those brakes like locoWelder, but I don't....so I had to do it the primitive way. The sheet metal on the air cleaner housing is quite light, so I just placed a 1 1/2" pipe in my vise and kinda worked the sheet metal over it til I had reasonably smooth bends. Not perfect, but not too terrible for the little bit of time I spent on it. The chainguard isn't sheet metal. It's a hunk of cast aluminum I cut out of an old Kohler snowmobile engine shroud.

Now, about this Power King engine....So far, I'm not impressed at all. I took it for a ride tonight and had a terrible time getting it to start, and when it did finally fire up, it had almost no power. I realize it's a new engine and needs some break in, but it's ridiculously gutless. My first thought was that my airbox might be to blame....so I put the stock one on, and if anything, it was worse. Then I swapped the carb with the other new Power King engine I have sitting in a box....it showed a slight improvement, but still way dismal compared to my Dax. Moving the needle e-clip to the third slot down from the top seemed to help a wee bit, but again, not much. Tomorrow, I'm planning on putting my Dax carb on it to see if that makes any difference. I can pedal this bike up past 20 mph for short bursts with leg power alone. Using only the engine, all I can get out of it is about 10 mph.

I've checked for air leaks on the base gasket, head gasket and intake gasket and see absolutely no evidence of leakage. Yet, it does seem to feel like a lean condition (the spark plug looks awful light colored)...so possibly a crank seal problem? I dunno? Perhaps it has the wrong main jet?

Also, the engine makes a fair bit of noise from the clutch area and the clutch cover seems to get very hot compared to my Dax. I know I inspected everything under the cover when I had it apart to paint...and I did apply a wee dab of grease to the gears.

Hopefully I'll get this sorted out within a couple days because I sure look forward to riding this bike. It's probably something really simple that I'm overlooking.

PS: On the plus side, the PK clutch has a much easier pull than my Dax. Wish I could think of more pluses, but I can't

EDIT; Just thought of another plus.....the twist grip is way nicer on the PK unit and fit the handlebar without a problem. The one that came with my Dax was so tight on the handlebar that I had to sand down the handlebar in order to get the grip to twist freely on it. Also, I think the integral kill switch in the PK throttle grip is a pretty decent set up.

Great looking bike! Make sure you post the pictures after you get the decals.

Nice attention to detail. Now, what's that on the tank?
L

iRide Customs said:
Great looking bike! Make sure you post the pictures after you get the decals.


Looks like I gotta find someone else to make me the decals because the guy that agreed to make them suddenly has some qualms about making up a "Hardly Davidson" decal. Seems he thinks he might get into trouble for messing with a Harley logo and is worried about a law suit. Can you believe that? It's a different spelling completely so I don't see a problem with it. I'll try and find somebody else to make them.
L

Bikeguy Joe said:
Nice attention to detail. Now, what's that on the tank?
Click to expand...


Hiya Joe....I just thought the tank looked a little naked and wanted to put something on it to dress it up a bit. I dug thru my miscellaneous decal and emblem assortment and found a couple adhesive backed Polaris snowmobile handlebar pad emblems. I thought they looked pretty decent, so I stuck em on. Also notice, I used double nuts on the tank mounting studs and then cut the excess stud threads off with my dremel cut off wheel.....if doing this, be sure the tank is completely empty cause that cut off wheel throws lots of sparks. 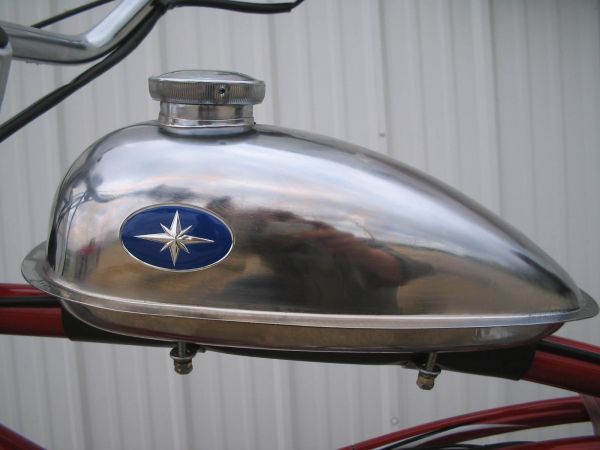 Full gas tanks just have a lazy burn, it's empty tanks that explode.
I've seen welders fill gas tanks, to be welded, with argon off the TIG welder to prevent ignition of fumes.

In the early '90s Harley Davidson came down heavy on all copywrite infringements. There were independent dealers that kept Harley alive through the AMF years and the lawyers came in and demanded all Harley signs come down. The suits went to m/c swap-meets and confiscated any merchandise that had a Harley logo on it, that had not been paying for the right. I like Harleys but do not care for the company or the family or their relationship with the AMA through the years.

So the guy has reason to not take the risk. HD has many millions now and intends to get even bigger.
D

Cool bike I love the color scheme. That whole sticker thing is crazy. Can not believe someone would not make that sticker sounds too much like Harly Davidson LOL
L

JosephGarcia said:
nice! Ok, since you painted the cylinder black, take some fine-ish sandpaper and sand the very edges of the fins silver. I think that will look good.
Click to expand...


That's an excellent idea and I'm definately gonna do it as soon as I get this thing to run properly.
L

So the guy has reason to not take the risk. HD has many millions now and intends to get even bigger.
Click to expand...

Yes, I guess I can understand his reasoning for deciding against doing the decals for me. He did mention something about Harley getting uptight a few years back about other manufacturers building engines with a similar exhaust note (I seem to recall hearing about that in the news, but can't remember the details). And I suppose that kinda added to his worries about the decal being a possible problem. Yet, it's not like I was planning to resell them or anything......I only wanted two for my own bike. Oh well, perhaps it was a silly idea anyways.

make a design, print it on decal sheet, clearcoat it

For Sale You can win my latest BTR Build! Worksman, Sportsman Flyer, etc.