Recently I bought the Qurve from Greenline from Spooky Tooth, and I'm finally ready to mount my 48cc on it. My wife and I have been so busy with selling our house and getting moved into "transition" (living with my mom until our new house gets built) that I just haven't had time.

I got the bent seat post since I'm 6'1" and sometimes I feel like my knees are about to hit my chin when I pedal. The seat may be sitting way too high right now, and I may or may not like the handlebars set that way (I did that for a board-track racer feel). I still have some adjustments to make, but I'll work out the kinks after I get the engine on. 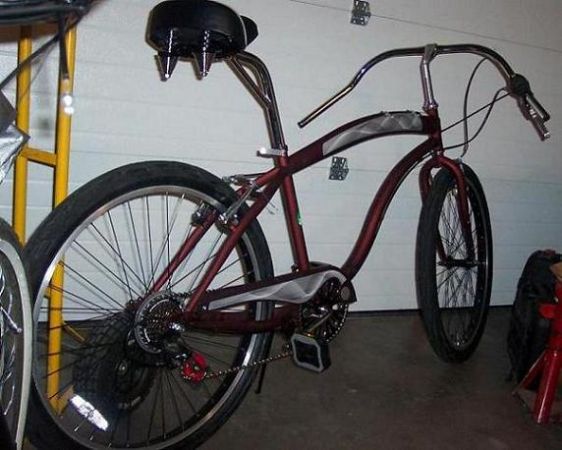 Come on Barret, is that a training wheel I see on the other side?
Just kidding, I have the opposit problem. I have a 6'8" torso with 54" shoulders but on the lower half, I wear a 31" length pants.
I'm a freak I tell you.
B

Dockspa1 said:
Come on Barret, is that a training wheel I see on the other side?
Click to expand...

Well, at least you can still ride a motored bike, right?
D

Wow, thats weird that you ask!
I just found out yesterday that i have to have a neck bone operation and I can't be jarring it for some time.
All better when they get done, I HOPE!
Doc
B

Well, I was FINALLY able to ride my "motokruiser" again after almost eleven full months since my last mishap!! I removed my one and only Chinese 48cc from the Huffy Cranbrook (that was a good first-time bike, but not quite to my liking) and mounted it to the Greenline Qurve just last night.

At first, my motor chain kept jumping off the back sprocket on the opposite side of the spokes because I was having difficulty finding just the right spot for the chain tensioner to prevent that from happening. On her first test run, and the first time I heard the engine start to catch, the chain jumped off the sprocket and I got a whiff and taste of the exhaust. I looked down after stopping and noticed my hands shaking, like I had been clean from drugs and then got a taste of cocaine and was wracked with anticipation and excitement. I wheeled her home and tried again. After a few more tries, I got the tensioner in the right spot. I took her out for the last time, and got her to fire after a bit. At this time, it was nearly midnight, and I was riding around in the neighborhood I grew up in near my mother's house...virtually pitch black! You see, her neighborhood is not lit like the one I just sold a house in, and with no lights yet on this bike and extremely dark streets, I was sure to run into SOMETHING.

Luck was on my side, however, and I made it home safely. Of course, the first thing on my mind this morning and virtually all day was my bike!

I turned the handlebars around from how they are normally mounted, and before I mounted the engine, was at first wondering if this was even going to work OK or not. But, after getting the engine on and riding it around quite a bit, I'm very happy with the results!

[A few of the pics are kind of dark; should've taken those in the sun] 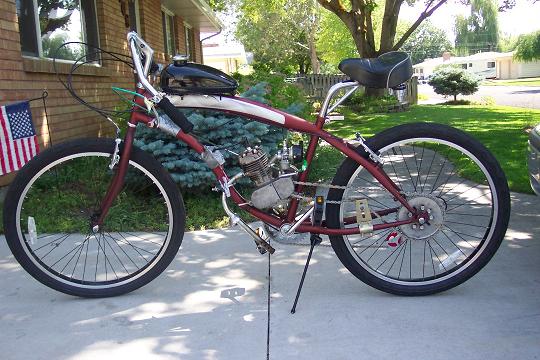 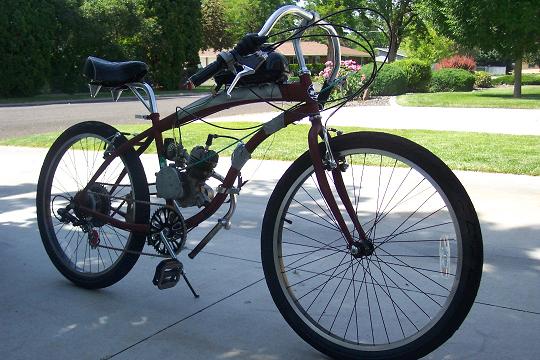 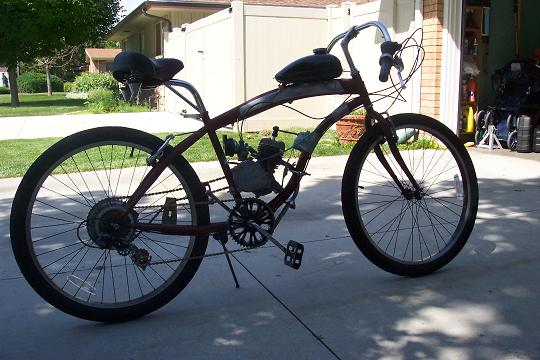 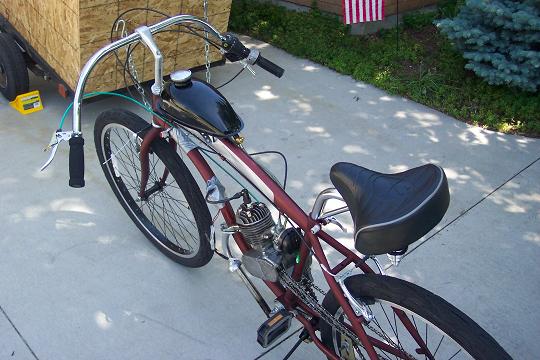 these bikes are addicting, aren't they
O

I wish my seat looked that comfy!

The love of my two wheeled life
2 3