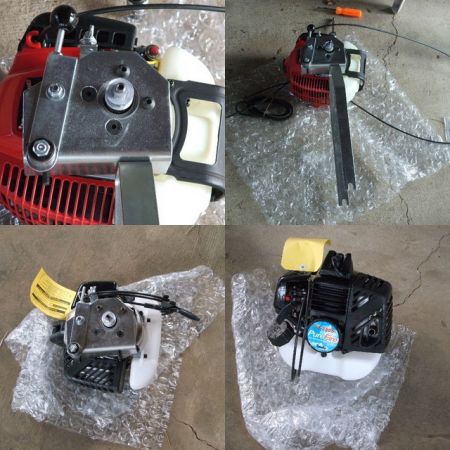 The 25 arrived Monday, the 33 Tuesday evening.

First impression- The new motor mount on the 25 for makes re-emphasis of building a puncture resistant tire, because if you get a flat on the side of the road, the whole unit, including axle mounts/strap, will have to be removed to get your wheel off and fixed.

But the engine is closer to center now. 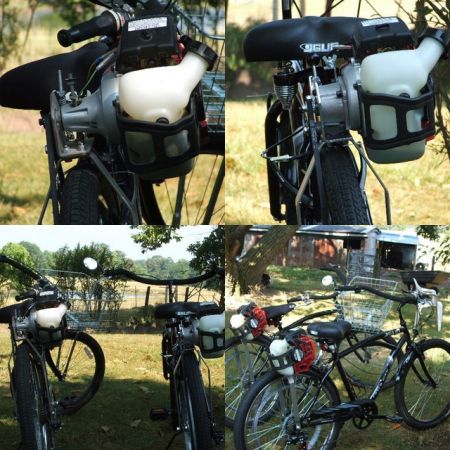 Old (on the left) vs new, side by side comparisons.

The old 25 has that single 11 mm bolt holding engine to the mount. The old way made for easier installation.

My last trip to the bikeshop, I got a supply of mirrors and Mr. Tuffies. Paul also gave me a tube of a new synthetic oil he is carrying.

I was going to town later for a doctors appointment, stopped at 3 places before I found a 4 mm Allans head mounted in a socket, my regular wrenches could not budge any of the motor mount machine bolts.

I was thinking I would have to rotate the 33 when it arrived later, to get the gas tank upright, but was pleased to find the plastic tank was mounted same as the 25.

I still might need the socket for my road tool kit, & found it at Sears. 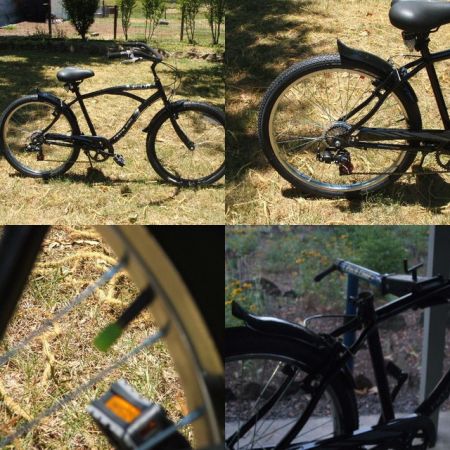 Here's the platform, the newest version of the Sun Alum 7.

Paul at The Peddler has already put in my slime tubes and Tuffy tire liners, so that saves a little time.

If the little half fender on the back stayed as is, it would bump the motor mount, so I have to flip that fender around. 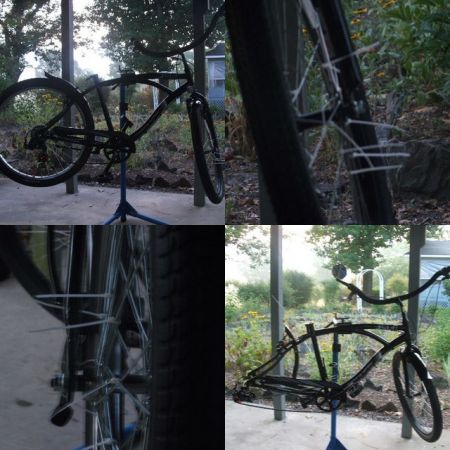 I do a lot of the little stuff in the dim light, like put on the bottle holder and mirror, zip tie the spokes, attaching the front strap. 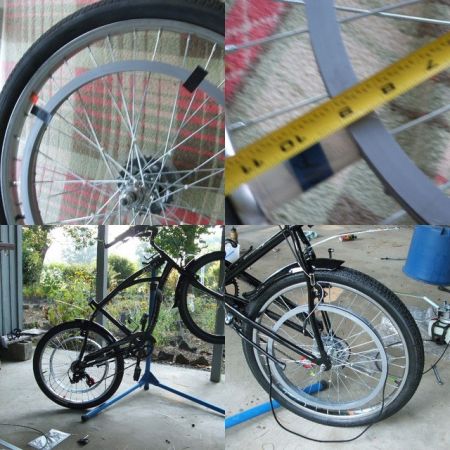 Double checking the spokering....measure twice, snap once. My syringe method, combined with using a tape.

When I spin the ring around the spokes to find the best fit, I mark the two best spots with small peices of electric tape. This allows easier snapping in the 12 o'clock, 6 o'clock, then 3 and 9 o'clock torquing method.

Double check when you are done, to make sure they are all snug in the grooves. I don't drill out the notches for 12 gauge, and take extra care to get all the spokes completely in the notches.

A few extra minutes doing this procedure will make for longer belt life. 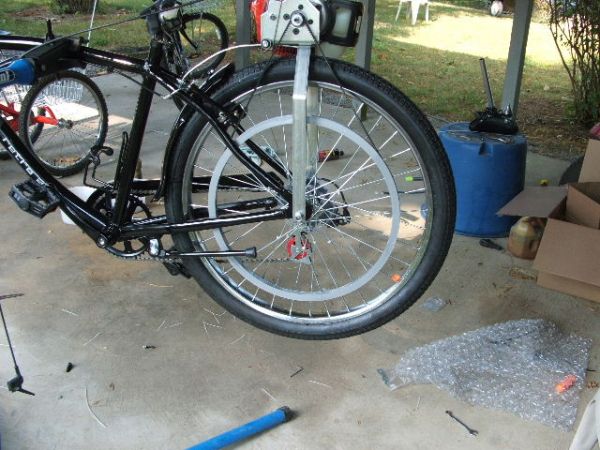 With my workstand, I pull the bike back further, and spin it so the rear wheel is touching the ground. That helps get the wheel back in the frame correctly.

With a workstand, gravity is our friend. Mine cost $120 with tax, and it is a must have if you build these for other folks. 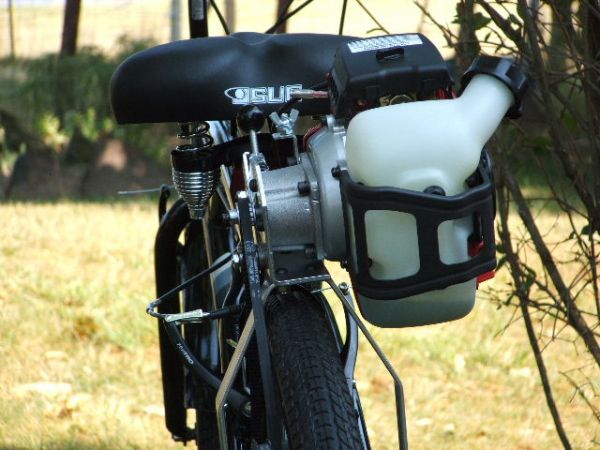 The little red hornet started on the third pull, a little before 10 am. Belt was centered in the gear, everything seems copacetic.

I rode back and forth along 5 mile road in front of the house, adjusting mirror and saddle,

Miles ridden....approximate 10, never at full throttle. Later today I'll put it through the paces for a 30 mile jaunt.

The black bike is supposedly already sold to a school principle, with the 33 mounted and a basket, but I'll break in the 33 on Rocinante, since I can carry tools and extra fuel cannisters easier.

Time to do some chores, I'll come in a spellcheck/edit this post later..... 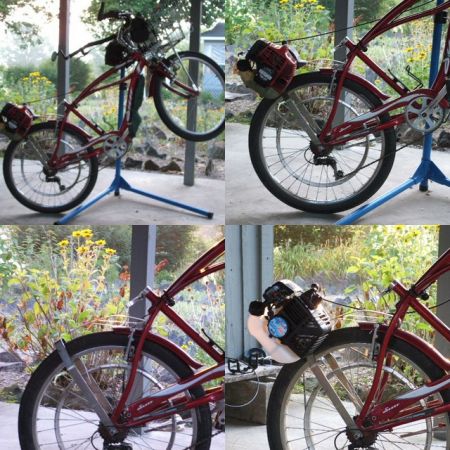 Starting at about 5:45 am, I took off the Denver engine, which now has about 5,000 miles, still on the original sparkplug.

Cranked on the third pull.

Question about if there is a spark arrestor in the exhaust.

Rode up and down straightaways in front of the house, seems quieter at 1/3 throttle, never opened up to full throttle.

Quirk on letting off the throttle, after a slight 1-2 second delay, it PURRS at a low idle.....

No problems on quick inspection, time to fill the tank, throw in the tool kit and put a 20 mile break-in ride. 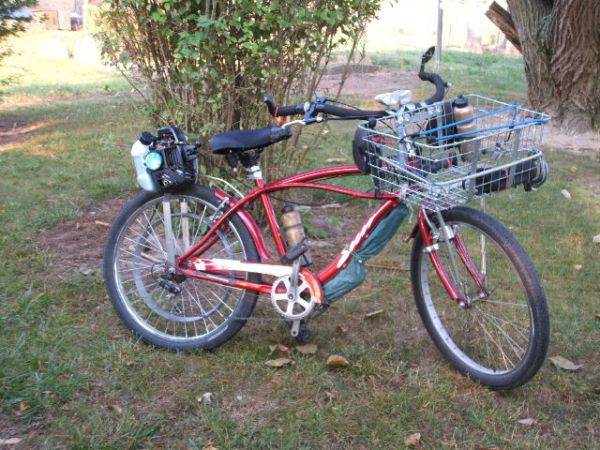 Overall I like the engine better than the 40 cc, the power seems similar. The little throttle quirk mentioned above stops after 20 minutes of operation, never to repeat....

I vary the speed constantly, from 5 and 10 second changes up to a minute at a different speed, seating the cylinder rings being the objective.

I hit top end on two level straightaways, and it feels like in the 33-34 mph range, never really seeming to top out. So it will get faster as the break in continues. When I find one of the many neighbors with digital speedometers out checking crops or cows, I'll ask them to time me on mile runs......(my road is nicknamed "5 Mile Road", even though its "5 1/2".) 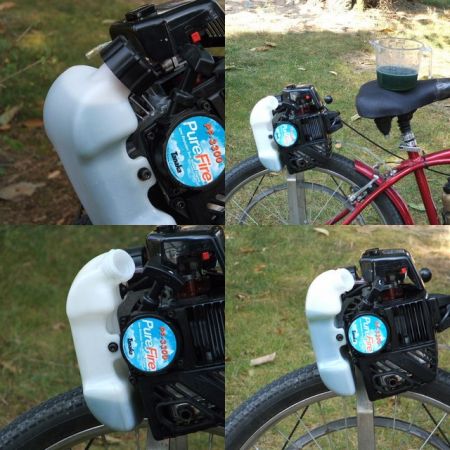 The engine, turned off for ten and twenty minutes, both times started on the first pull with no choke, which is a very good thing.

I'm measuring miles and ounces, second tank was better than the first, but I'm in hill country, and so I will put a gallon of gas through the engine before I make a review of mph.....

HOWEVER, living so far from the county seat, I can see that I will need to design and install that auxillery fuel tank system mentioned elsewhere OR install a bigger tank on the back. I can see where to put a tee in the line, and suppose I need a cutoff for times when I'm not using a spare....

I'm looking for auxillery tank ideas, and pix of such a system, please !!

The 33 cc Tanaka now has about 100 miles on it, mileage seems to be improving, but it sure is an adjustment from the 25cc.

At first it seemed to be in the 140 mpg range, (ounces of gas and mileage rounded off, I'm not doing anything scientific like Popular Mechanics.)

19 ounces of gas to do about 25 miles was my initial reading.

Yesterday I did about another 75 miles, and mpg seems like it is going upwards.

bamabikeguy said:
Paul also gave me a tube of a new synthetic oil he is carrying.
Click to expand...

This is strictly my opinion and experience, so can't be taken as scientific proof-

Before I got the first Zenoah, I called GEBE customers, and they said there would be two kick-in moments on the engines, one at about 150 miles, the second at 1,000 miles.

The Denver engine was the first that achieved that for me (the rest having been sold). I remember when that happened, headed west out of Manhatten Kansas. Wheeeeeeeeee. Just like surfing.

So, I always use name brand 91 octane.
I try to breakin those engines by running them 100-150 miles.
I use Stihl brand oil.

When I got back from Colorado, Dennis at GEBE wanted to look at the cylinder/rings, and he called back, said they were seated perfectly.

On the Mobile trip in January, some fishermen gave me that bottle of Amsoil.

Since I am running up to 5 engines at a time (the new Zenoah still only has 20 miles under it's belt, I'm concentrating on the Tanaka now), I don't mix the synthetic here at the house.

BUT, on the road, on the Denver engine since it is running so smooth, I think I'll take that bottle of synthetic for mixing on the road.

The problem with the OptiZ is the plastic pack mixes a gallon, and I don't mix it by the gallon on the road. I take an animal syringe with me, to measure nearly exact.

I'm on the Greygeezer yesterday, 20 miles in the middle of nowhere (no tools/no spares/no worries) and feel something rubbing on the rump.

"Oh no, all my strap advise, the thing broke and moved forward" I think.

Stop and examine, strap is ok, but the single METRIC (.79cent) bolt holding the spark plug cover has fallen out.

Then, when I fueled up with a spare canister, I find the two (upper/lower) on the right hand side of the string pull also fell out.

The engine is running GREAT, but all the noise is due to this plastic cover.

If you look to the left of the exhaust, a bolt holds a small plastic arm, shaped like a slice of pie. That cracked early on, I've tried superglue and hotglue/ducttape combo.

The "fix" may be JBWeld or 2part epoxy. I went to Gary's Small Engines, (a model A collector) I hadn't seen in years. He had fingernail polish to better hold those cover bolts, and used some yellow zip ties- holding the seperate peices of the guard together at the joints, to get me home.

He said a strip of metal might be the reinforcement necessary to make the "pie" mount bolt work better.

I'll do a real fix this morning, replace yellow with black ties, meanwhile, double check yours. I bought a total of 12 bolts, at .79 each, for future repairs.

First Time Out on The Electric This Year
2 3