New bike build, what about adding a pull starter? and more.

Last year I bought one of those zeta built in gas tank bike frames. It's been in the box ever since.
I FINALLY bought a motor and some other stuff. Want to paint some kind of artwork on this pristine frame first so I have some time here.
Meanwhile I stumbled onto a few youtube videos showing how to install a pull starter. Seems easy enough, found them on ebay, not all that much money. BUT not one video actually showed someone starting the bike. One guy tried, pull pull pull nothing nothing nothing. Said it's cold, probably just cold. Well.... I know all about the pull pull pull nothing with my other bike. And assorted other motorized things.
Still it's easier to pull than to huff down the road and pop start one. THEN have it not start.

So... anyone have experience with these? Are they worth it? Every pull start motor I own has a choke and/or a bulb to prime with. How would these work then?
Also would I need a wider pedal crank bar if I got one?

One last sort of unrelated question....
I really hate riding hunched forward like on a ten speed bike. My first motorized bike is a beach cruiser. VERY comfortable. But this zeta frame came with a straight across handle bar. I suppose I should slap the wheels, and seat on and just try it but I kinda already know I'll be leaning forward.
So... anyone ever put more upright bars on one of these?
Just pulling up a random ebay listing here, not trying to promote anyone, but this is what I was thinking of getting instead of the one that came with the bike. bmx handlebar
IF I do this, is there a size I need to locate somewhere? Say like seat posts come in assorted sizes? Or are handlebars all typically standard?

I had a pull starter, it breaks fast, and doesn't work so good, only when the engine is hot.

Ah.... ok, maybe I'll let that idea go then. I did notice right away on just about every listing for one it said, don't pull all the way or it may be damaged.
Well I started out with a two stroke, it was a pain to pedal start but I usually got it going.

Did you get forks and such with that frame? You can put any fork and bars on you like. Just be mindful of what kind of stem you get, some bars clamp on (two separate pieces) and some slip through the stem. In which case those BMX bars aren't going to work.
I'd recommend a nice suspension fork from a rock hopper or down hill.

Yes it came with everything bike. Just not the motor. IT's got a suspension fork, and I looked at the handlebar last night, it's a single stem that holds it but wow it's fat in the center. Slightly over and inch thick.

Here, I got the white one. bike frame

artmaker said:
Yes it came with everything bike. Just not the motor. IT's got a suspension fork, and I looked at the handlebar last night, it's a single stem that holds it but wow it's fat in the center. Slightly over and inch thick.

Here, I got the white one. bike frame
Click to expand...

I have the same mags on my 4X bike.

Yea I have some very similar ones saved on ebay.
The one I want looks just like yours only with a bar going straight across the top too. (More spots to attach lights, horns, etc.)
Wrote to one seller asking for the size where the stem fits. Still waiting for an answer. (So many sellers there never respond. Boggles the mind. Don't they want sales?)

Unfortunately, no you cannot use the single piece, single pinch-bolt, stem to attach the BMX handlebar.
It needs to have the separate piece clamping down, because BMX bars don't thread through.
BMX bars are nearly all still in their original diameter of 22.2mm, no central bulge, all the same as the grip and levers section.
Also a single pinch bolt was woefully inadequate for even an ultralight motorcycle. Two would be a vast improvement, but the separate saddle clamp with four bolts is the one to get. The devil is again in the detail.


Next bad news. There is no suspension fork there. What there is, is only a suspension shaped fork, or NRS (not real suspension) fork: A spring in a tube.
Suspension is ALL about the damping.
All of the energy being "absorbed" by a spring immediately comes straight back out again into your hands. It may help if you hit a brick in the road, but over the course of a bumpy ride a springer fork will make no significant difference to your comfort and control.

At high speeds you will enjoy greater safety and control using actually real suspension.
Length of the speed run depends on how hard the damping is worked, for its energy storing/shedding capability.
You may end up spending twice as much money on your suspension as you did on your frame. Depends what you're looking for.

This lightweight Rockshox Bluto can go very fast on big bumps for a short time. I want to go 50+ on hard striated sand (a flat beach with the tide out).
This fork cost more than the hi-ten steel Chinese fatbike frame it's going on. ☺ 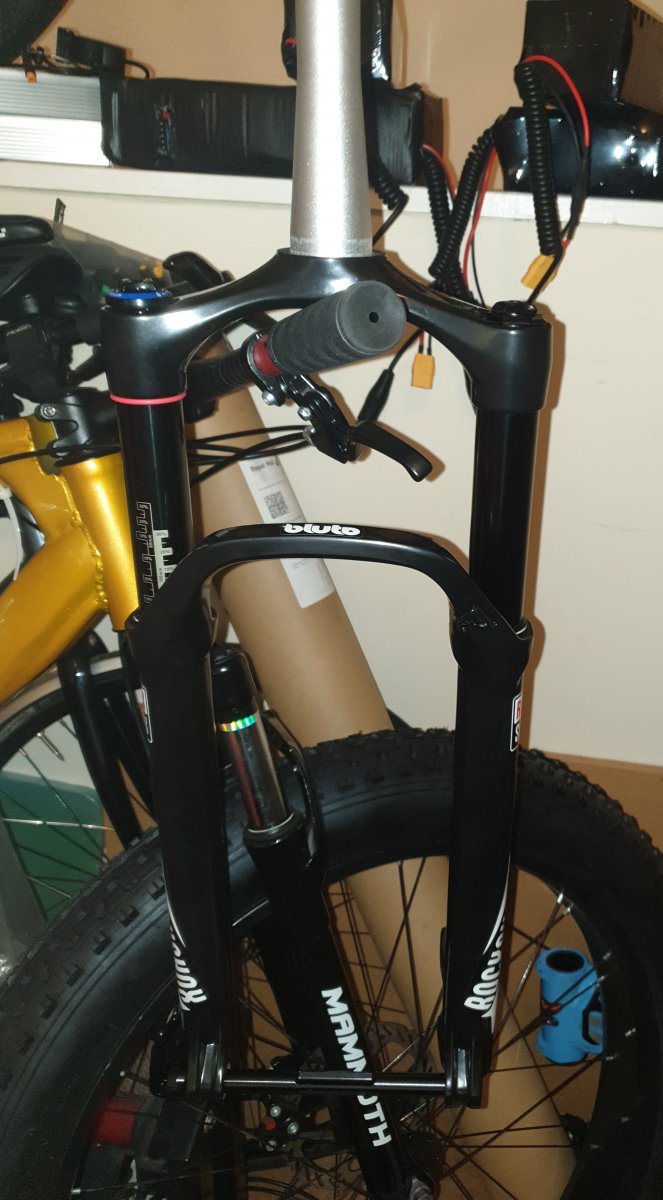 This historic mk1 Marzocchi Bomber Z1 from 1996 can go fast on bumps for about as long as you can hold on!

It transformed the sport of mountain biking a quarter of a century ago. It should be collected as a pair with the (much stiffer) Z1 BAM.
It is not expensive. I think mine was £40. Theres other models at under £70 on the used parts marketplaces.
but the Z1 BAM, the fork that replaced this Z1 immediately in all the race teams during '96 into '97, and was way stiffer and lighter due to the aluminium, can be close to £100 if the outside condition looks collectable. 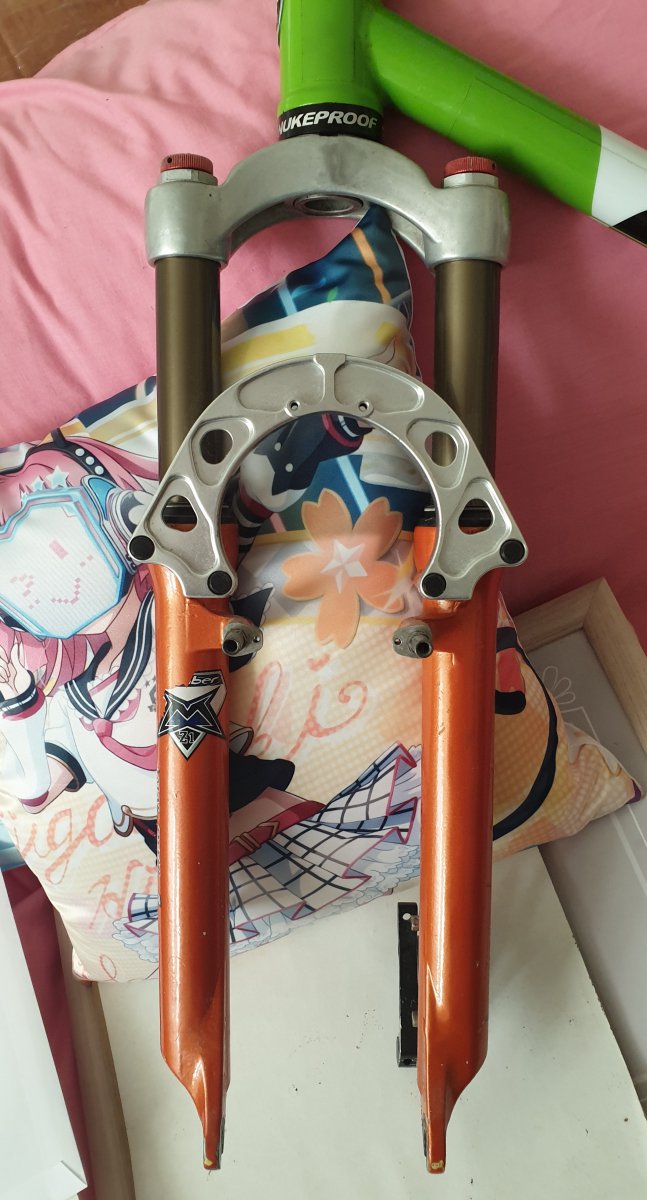 The Z1-Z3 Bomber models have less issues with heat build-up in the hydraulic damping fluid, than modern lightweight mountainbike forks, due to its traditional motocross suspension technology called Open Oil Bath damping. It has a very high volume of hydraulic damping fluid which serves both as the forks lubrication as well as the damping. This means it circulates fully and is in contact with the lower and upper fork legs, which allows a lot more heat to constantly and quickly get out of the fluid, and then out of the fork.
The OOB system is extremely uncomplex and easy for the home mechanic to tune and tweek to his weight and needs using different weight (blendable) fork oil and adjusting the oil level (actually the air volume left above oil level when you screw the cap on).

The short travel and heavy weight (and flex in this first design) are its limiting factors on the Bomber Z1 and Z1 BAM.
For that there are other slightly later Bomber models.

Furryontheinside recommends, for the serious motorised application, any of the Open.Oil. Bath. Bombers that are marked Made in Italy. ☝

I appreciate the time you spent to post all this, I really do.
BUT...
I honestly don't care about suspension. It happened to come with the bike and my guess, under my 300 lbs riding at high speed on a heavy motorized bike, that the fork that came with the frame will fail. At which point I'll replace it with a standard plain old fork.

What I need to know about is how to replace that handlebar that came with this bike with one that reaches back some. The BMX style seems ok. If not than a beach cruiser style would reach back more. Last resort, and frankly would look dumb on this frame, is a long handle street rider type.
Anything to get me in more of an upright vs leaning forward ride.
So what I need to know are dimensions of the part that fits in the (oh what the heck is this called.) The part that clamps onto the handlebar. That thing. Mine seems to have a pretty big diameter. I need to take an accurate measurement. But I can't tell from ANY listing so far what diameter their handlebars are. Contacted several sellers now and not one bothers to reply.
So more reading to do. Still have time, still want to decorate this... family over all weekend, busy Monday, won't even get a start till mid next week sometime. So I can figure this out.

Well I don't mind posting my opinions around the forum, certainly that was not a lot of new info but a little extra commentary on what I've shared already, in another place for newbs and lurkers to stumble upon it in future many years after I'm gone.

Your bike did not come with suspension at all.
And yes a rigid fork would have a predictable position (pick it up over the potholes and put it down again) and less flex for its weight. That should be considered.
The stem, you will have to measure the steerer tube coming up from the fork. Make certain that it is 1&1/8" or 28.6mm that is the STEERER diameter.
Whatever handlebar you want to fit us fine with me and you need to be comfortable not getting back pain.

That is handling though, not body position.

And I would prefer the saddle forward than bars back, personally, I think, to make an upright body position that still has stability during front braking manoeuvre.

Do as you please
BMX handlebars are usually always 22.2mm bar clamp diameter for a stem with 28.6mm steerer clamping diameter.
A few other standards exist.
25.4mm , 1 inch exists. That has a tiny bulge in the middle where its clamped. Not that common afaik its mostly old road racing bars that were 1" all the way around.

Obviously once you get into cruisers and moustaches and ape hangers there are far too many old, mid, new, custom, random options to bother trying to find the right diameter bar to fit a stem you already own. You should just get the bar that tickles your fancy, and then when it has arrived you can look for a stem that fits it.
It probably will turn out to be one of only two sizes that dominate the worlds supply of handlebars, not the ultra narrow or ultra wide exceptions.
28.6 is Chinabike mtb size.
31.8mm is late 20th/early 21st century mtb standard.
Last edited: Jun 6, 2020

Pull Start or Bipod Kick Stand for a Garage Start?
2