I mixed up a batch of Penzoil and de-gummed castor at Penzoil 4 ounces, castor 3 ounces for one gallon, mixed well and filled the tank to the bottom of the filler neck on the Ross Europia based "military" bike.

Here's a few from the road-


First pic is about half way through the ride. I decided I'd try a little ride on a dirt road and it wasn't as hostile as I had expected....although I passed more cars on this stretch of dirt road than the previous 30 miles. 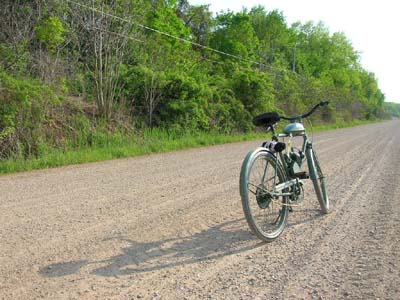 A few miles later I came up to "civilization" and stopped at an Autozone and bought a little packet of tail light bulb grease because my gears were a little whiny at this point.
I sat on this bench- 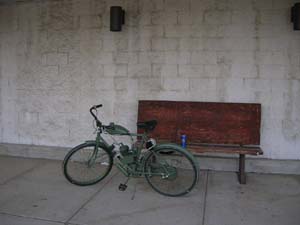 at the abandoned Giant Eagle grocery store and took my cover off and greased the gears...the grease quieted the gears for another 20 miles or so, but then it was done. Better than nothing.

I rode to this bridge- 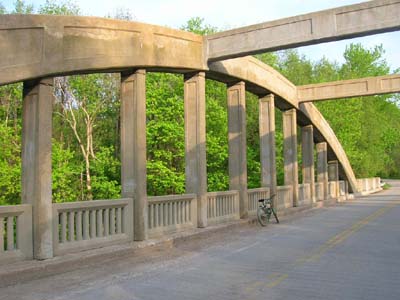 the locals call "The Rainbow Bridge" and have for years because of the shape of the structure.

A few miles later time for a rest and this was the place I took a break, one of a thousand fields like it being readied to plant.- 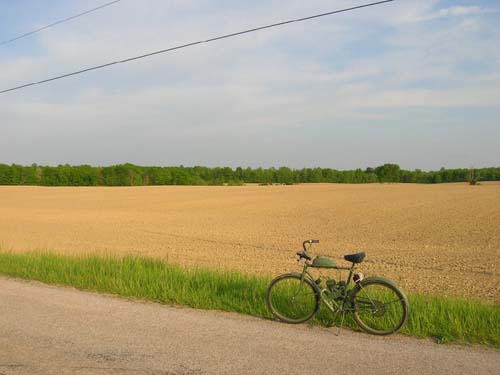 Finally, I rode back toward home, but took a detour to the first oil producing well in the U.S. preceeding Drakes "discovery" by 40 years. They were looking for salt brine and pumped out a bunch of crude oil on the ground before they gave it up as a waste. Here's one of the sign there- 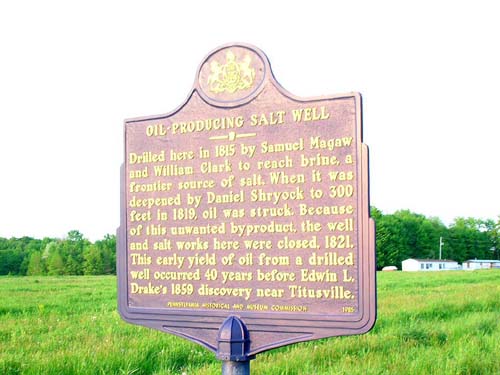 and another of the sun the bike and the sign.- 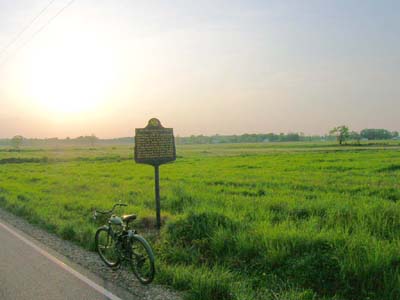 Saw this as I cruised back toward the Ohio/Pennsy line the sign says "Do not litter Keep PA beautiful". 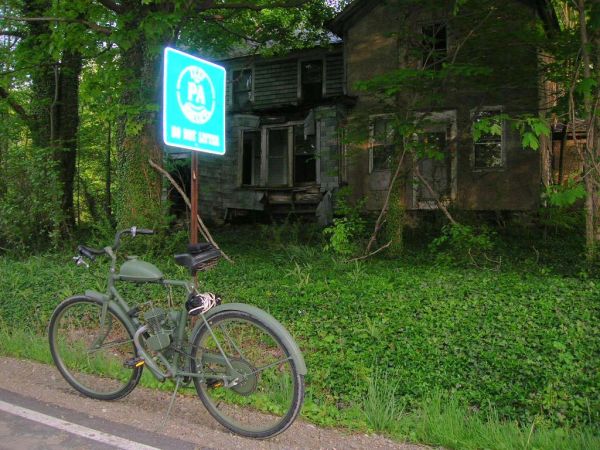 Beautiful Country... Just Beautiful !!! Sweet ride too. Make sure you have a good air cleaner for those dirt roads... Enjoy the ride...
D

Nice trip Joe, how long was that dirt road? Actually, it looked fairly smooth for a dirt road. My first bike wreck was on a gravel road and to top it off, I was on my father's 1959 BMW. I still get leary on gravel.
How was the buttox after 100 miles?
Doc

Thanks for the virtual trip! I had a great time!

I love those long trips. I live around LA and don't have scenery except for smokey factories and smoggy skies. But being able to just get out and go is still awesome.

I took my old motorbike offroad a good number of times. It had high ground clearance. It was so fun!
G

Dockspa1 said:
Nice trip Joe, how long was that dirt road? Actually, it looked fairly smooth for a dirt road. My first bike wreck was on a gravel road and to top it off, I was on my father's 1959 BMW. I still get leary on gravel.
How was the buttox after 100 miles?
Doc
Click to expand...


The dirt road was only a couple of miles (the part I was on). It was fairly smooth and I ran at the edge where there wasn't much deep gravel.

My physical self came through pretty well, no pain in the butt, just some neck/back soreness after I got home and sat down for a few minutes, I stiffened up.

Thanks everyone for the comments and for looking!

First Time Out on The Electric This Year
2 3