Built myself a new 66cc China girl last week. I'm currently in the middle of the second tank on the breaking mixture. The bike just has relatively little power but if I take the tip off of the stock muffler it runs great and is plenty speedy. Any thoughts on how to deal with this and reduce some of the noise? It is just way too loud with the tip completely removed. I cut out the long pipe attached to the tip and put the tip back on but that didn't really seem to help any.

Just to correct the end of my last post, putting The tip back on even with that pipe cut off inside it still runs like garbage.

For the noise reducing part, you can have a perforated pipe go through the middle. You can make it out of a soda can and drill a bunch of tiny holes in it and attach it with foil tape . Then put stainless steel wool (not regular steel wool cuz it burns) or even better, silent sport wool (more expensive though) around the outside of that inner pipe. You want a clear pathway for the exhaust gasses to move through the muffler for optimal performance which the inner pipe will do, but also allow some sound waves and exhaust gasses be absorbed and/ or reflected to reduce noise which the wool will absorb. These are called glasspack mufflers. They are very simple and least restrictive while still muffling sound ok, but often not as much as other kinds. 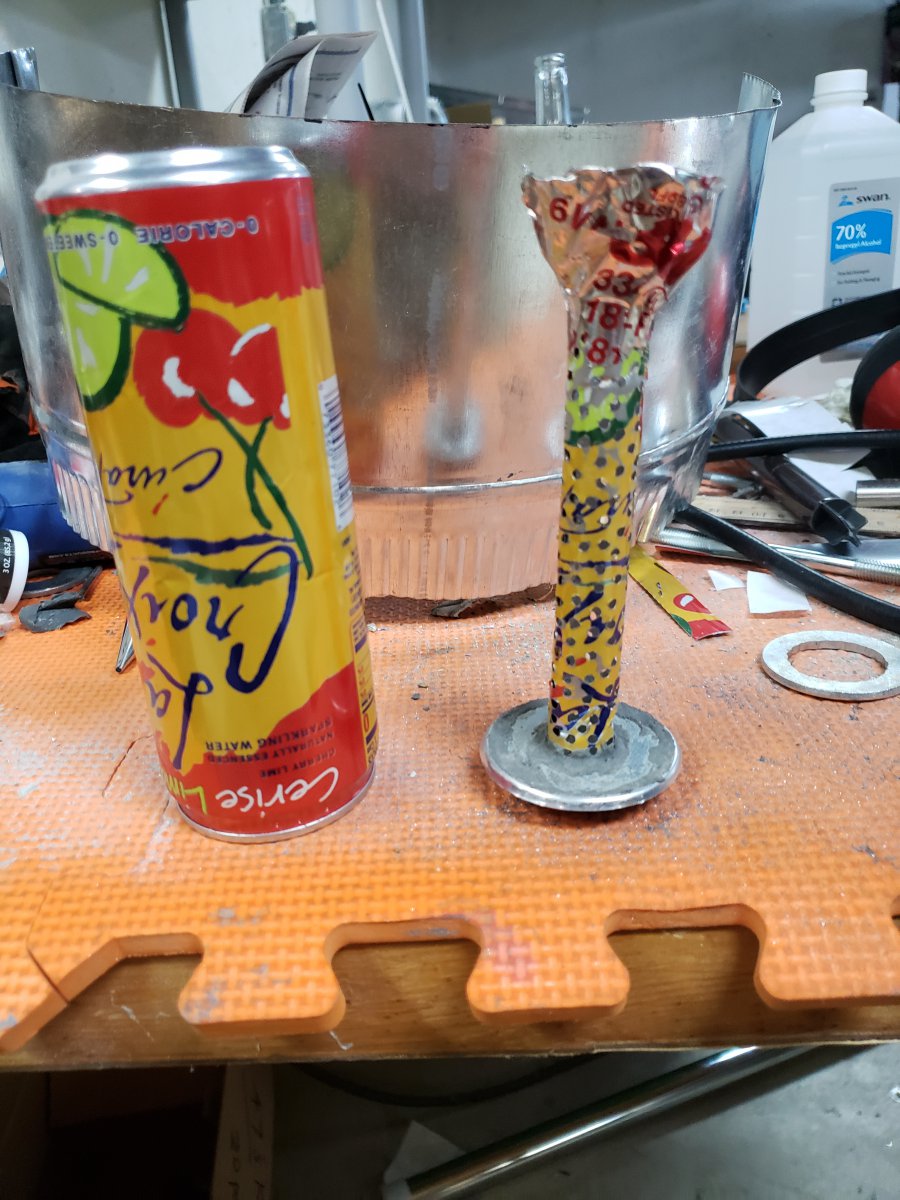 You built it yourself in a week? As in hand built your own from the bits they send you, or you just "installed" a cheap no brand generic "engine kit" as it came and you didn't get to know, improve or understand any part of it? The kit is there for one reason only and that is not to make good reliable power and efficiency. Its just the very cheapest roughly engine-shaped object that the China factory could supply, to obtain the foreign currency they need.

Your open exhaust is probably/presumably allowing a reversal of flow, like a short sawn-off header, only not quite as bad
Fresh air is presumably getting back into the combustion chamber and partially correcting a too-rich condition.
Lowering the back pressure/restriction somewhat can help somewhat under the normal conditions where the exhaust path is longer and is restrictive; but your description of a large increase in power suggests that there was currently a serious malfunction of another kind, lowering thd power output, that is now being masked by your "improvements".

Imho, and I can only advise from the information that has been shared here by really credible members and sources...
It's improving power on the severely malfunctioning engine in the short term while causing uneven heating of the piston and rings, and risking abrasion of the cylinder bore or a broken ring from various foreign particles constantly being flicked up off your front tyre, which are likely going up into the open exhaust and getting sucked inside during the resonant cycling of the 2-stroke.
This way of compensating for a rich condition is inadvisable. Its a really bad idea and as you mentioned it is unsociably noisy.

To correct a rich condition the recommended method is to start by purchasing a jet kit for smaller than stock # size jets (most kits come with the NT carburettor which takes 5mm thread Dellorto pattern jets and the stock size is around a #70 so you need smaller than #70) then after trying the next smallest, the #69, then the most popular #68 or #67 sizes.
Even try the #66 if you're in a warm location, as it is summer in the northern hemisphere this could be the right size in even an average climate.

You have a stock air filter housing? a red or black plastic thing? This could be restricting airflow and causing even more (a little more) overly rich condition and could lead you to try even a #65 jet in your carb. That would not be as good as having a really decent flowy unrestrictive air filter and a reasonable size jet to match it, but it certainly should beat a sawn-off exhaust! You would ideally start with thd air filter imho, though most people don't bother until they get their engine performing and flowing so well that it becomes the obvious next biggest restriction.

After you find the right size jet, try repositioning the C-clip on your needle that controls the 0-to-quarter throttle mixture too.
The most popular position for the needle clip is the second notch down from the top notch of the needle. Do this after getting the jet correctly sized.
This is the second leanest position, because it drops the needle low into the jet.

*I can only advise and do not guarantee the correctness of this post. It is how I understand the principles and practice of getting the most reliable, safe, sociable power out of the cheap generic 66cc 2-stroke "bicycle engine kit"*
Last edited: Jul 28, 2020
Share:
Facebook Twitter Reddit Pinterest Tumblr WhatsApp Email Link
Top