As promised here are some pictures of my previously mentioned rat bike.It is torn apart right now since I am working on modifications. The copper tubing in the first picture is part of a new tank mockup.

The front hub is a 1930s Schwinn drum brake. I originally built this bike as a mountain bike prototype in 1980. All the parts except the front fork, rear hub and derailleur, alloy rims and tires, and handlebars were made before WWII. I built the wheels at this time with the only 26X1 1/2" rims alloy rims available: Araya. I made a headbadge from an emblem off of some old machine , thus conceiving a bike brand that never was.

I rolled it to fit the radius of the headtube. I used a Monark springer fork off of a girls bike because of it's longer steering tube. I put large washers between the forkcrown and the crownrace to lift the headtube and give more bottombracket clearance since this was an off road prototype. The frame is from a Hawthorne brand bike which was sold by Montgomery Ward. It was made by Cleveland Welding Co who made many brands for numerous companies. When I first got a chinese motor, I was planning to put it on either an old Schwinn straight tube or a phantom frame, both of which I had lying around. Both these frames had curved downtubes and I didn't like the way the motor fit the either frame. The rat bike has straight down and seat tubes and they were at the exactly correct angles to fit my motor without modification. I don't like the way the teardrop tank fits this frame, so I am in the process of making a tank to fit between the toptubes. I also didn't like having two left handlebar levers(1 clutch, 1 brake). I didn't want to use a twistgrip type clutch control either. I ended up taking a barend gearshift lever and modifiing it to use as a clutch lever. It has more travel than the stock lever and is adjustable for tension. I have it rigged to run in the down position(out of my way) and disengage the clutch in the up position. This is still out of my way but increases the width of the handlebar by 1.5 inches. On most motorcycles the left lever is the clutch and the right lever is the front brake. On most bicycles the left lever is the front brake and the right lever the rear. I decided to go with the standard bike lever setup, since this is more bike than BIKE. I have a few more pictures which I will post right after this.
Click to expand...
P
Written by

I was in the process of machining an adapter to mount on my rear wheel, when I got involved in the projects mentioned in my previous post. The spoke flange on the hub I am using was at the same place as the mounting holes of the rear drive sprocket supplied with my engine. I decided to make an adapter to mount on the hub such that I could center it and be able to change the sprockets with out have to recenter the sprocket each time I changed it . I can just bolt the different sprocket to the adapter. The inner diameter holes match the drivesprocket. The larger countersunk holes are for mounting the adapter to the wheel. The notches on the underside are for spoke clearence. More pictures to following when I get this finished. 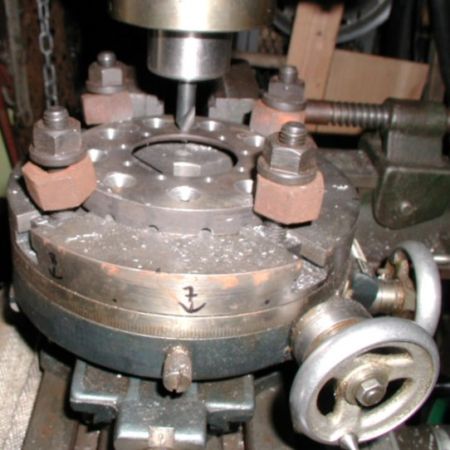 I finally got my rear hub motor drivesprocket mount finished. The flange is bolted to the rear wheel and trued. Then the rear sprocket can be mounted and removed without disturbing the mounting flange in the rear wheel. I also provided different coupling/protection for the spokes. The spokes are sleeved with plastic tubing as well as two layers of rubber and two layers of 40 milPVC sheeting. On this bike, the spoke flange on the hub is close to the bolt circle of the factory rear engine sprocket mount. I have actually done the final mounting of this unit on a different hub and wheel than the one pictured. The flange mounting bolts are shorter and the nuts are nylocks. Same with the sprocket bolts. All bolts are grade 8 flathead allen capscrews. The inner clamping ring is thread as well so the nuts act as lock nuts. I used a dial indicator to true the flange radially and axially on the wheel. I settled for .003" runout. Unfortunately there is about 0.017" distortion built into the chinese sprocket supplied with my motor. The complete unit weighs 1.75 pounds(0.79378665kg) 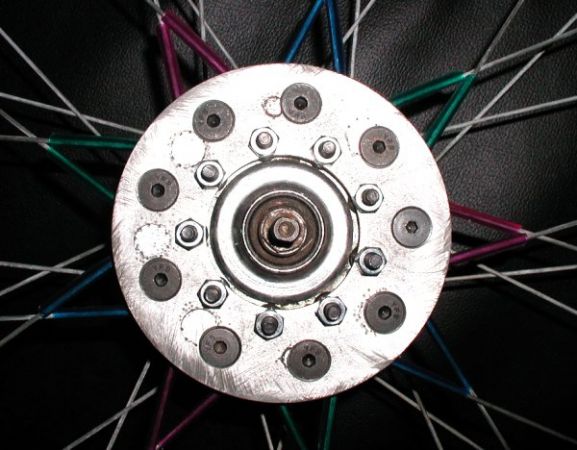 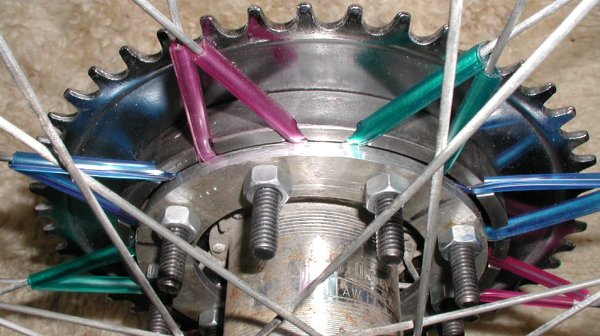 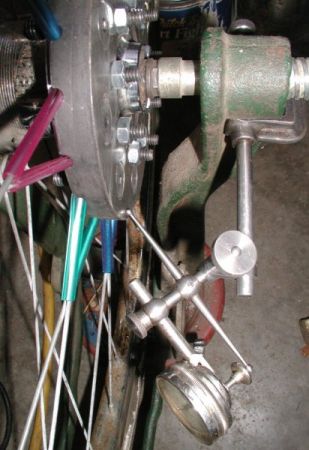 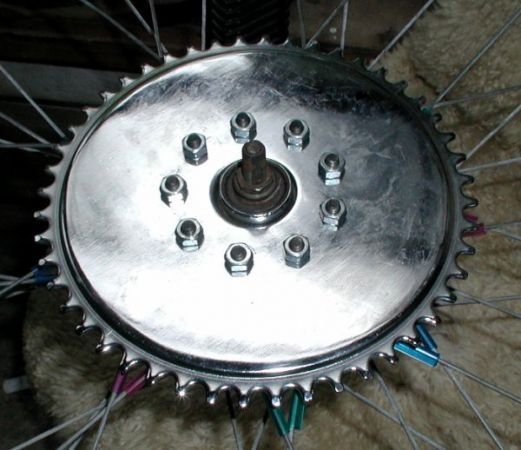