REVIEW 4 cycle up and running report "IT RUNS"

ok. All finished..Except for Kill switch and another Kick stand. Forgive the shotty nature of the bicycle. It is a good bike though. TREK 800. So..Here is the deal so far with this new 4 Stroke.

As you can read in another post, Parts were missing. The sprocket that comes with the kit must be a 55T or larger. Since parts were missing, I put on a standard 44T. Later ....Checking the Blue tool bag that came with the kit, I found more than tools...There were all the missing parts I needed..O well...I should have checked the little blue bag..Who would have thought.........But..Anyway..Got her all installed with a 44T. Next...Was to start her and ride her and put some testing miles on this 4 stroke.....


Before starting...I pulled the plug and checked for spark. Standard operating procedure...SOP. On the first pull looking for spark, A double hand full of oil came flying out of the spark plug hole and went all over my garage wall...After some wiping...I covered the engine with a rag and pulled several more times blowing even more oil out from on top of the piston and a lot out of the exhaust port. WOW !! All that oil in the top of the cylinder may have seized my motor or even bent the connection rod with all that excess pressure. Maybe it would have broken my rope starter and saved the engine...Never less..It did not happen..Only because I wanted to check for spark by removing the plug. Since the engine is shipped with no crankcase oil, that must have just been a ton of assembly oil. A TON !!! so...I filled the tank with premix..Since that is all I have..And took the bike out to the drive way...No Joy..I pulled and pulled and pulled !!!! I hate Pull starts !!!!! Finally..I go some ether and sprayed some into the intake...She fired..only until the ether burned off.. I pulled the plug and dripped some fuel in there... Pulled several times...She fired..and ran till that burned off. So..Back into the garage she went... I pulled the carb and took it apart and cleaned all the jets. Oh..Did I mention..I filled the crankcase with 10W40 Valvoline.

Ok...We are cooking now !!! She runs great !!! About the same power and speed as the two stroke. This surprised me. It feels like more torque for sure..About the same speed...Not sure..But at any rate..She runs great with less vibration and less engine noise..But the auto clutch with reduction gear drive makes a whine !! I mean..A whine !! IT is louder than the the 2 stroke for sure !!! All because of this Transmission. Wow !!! It is a Whining Screamer !!! I thought that since this transmission is enclosed, and having no directions at all. I felt that this was a wet clutch and gear enclosure and that is was screaming for oil !!!! So..I took her home and added 1/2 pint of 10W40 to the enclosure ... And...That was a messy mistake. It all came back out the little vent hole drilled in the filler bolt . It came out ...All of it..All over my bike , leg and everything..So..I guess it is a dry clutch with reduction gear..lol...Anyway..That is the latest.
I will now go and put on miles and see if she goes or blows !!! That is why I bought this motor.. To test and see if they are better than the traditional 2 strokes. Well..Here are the pictures of one of the first installed and running 4 stroke kits I know of...I will keep you all posted of the progress !!! Thanks again... and remember.... Thats DAX !!!!! 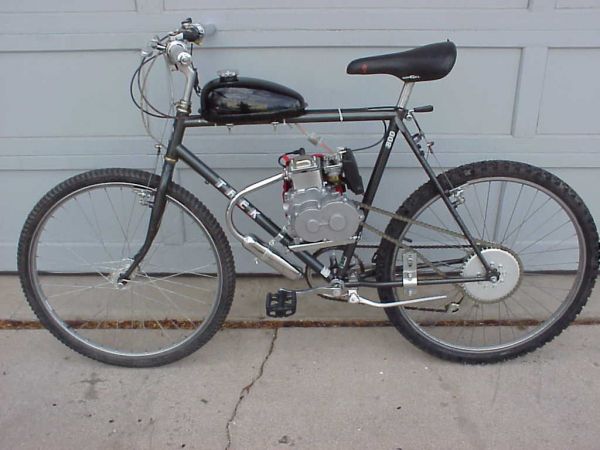 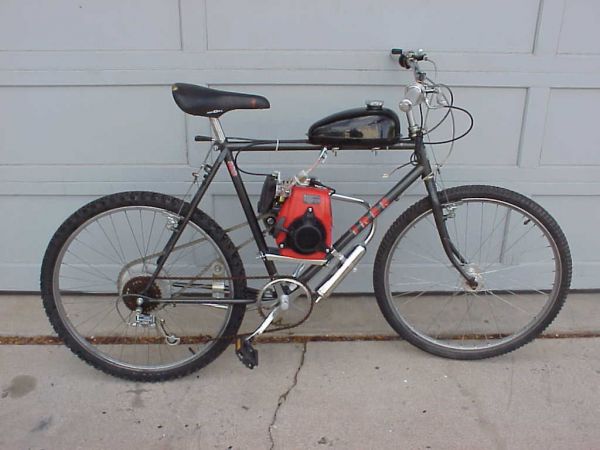 Thanks for the reveiw! Who else has one or is getting planning on buying one?
R

I wonder why it comes with a standard 55t sprocket? If the engine is pulling the same as a 2 stroke on a 44 tooth sprocket at 5000 feet altitude, just imagine how great it will do a sea level!

Couple of comments. A 4 stroke takes longer to break in than a 2 stroke. The reason is that its the pressure of combustion that presses the rings against the cylinder wall to seat them...happens less frequently than 2 stroke. So, if power is equal to a 2 stroke, think how much stronger it would be once everything is seated/broken in.

I do not know for sure but the carb should have a low and high end mixture screw that is so sorely lacking (or elusive if you think it is the idle speed screw) in our 2 stroke engines. This should help fine mixture for altitude. Grady/Duane please confirm or deny this issue for us.

Engine should run slightly stronger on straight fuel than premix.

I thought the gear reduction system was a wet system too.

Now that you are done playing with your new toy, please put it on Ebay and order some more from China!
T

I am not Done Testing yet...

Here is the run up ... This engine is louder !!! Louder because of the Tranny. I do not think this kit is Grubee. It is much different than the Kit I see from Grubee. The Engine is not a Honda GX anything. It is an Asian 4 stroke. I sure it is a Japanese Knock off of Yamaha or Honda or KAw or something. Again..The tranny is so loud , It takes a lot of the fun out of riding.. The engine is huge !! As you can see in the pics. IT is large to be sure. So far...Here is my take with only around 25 miles now..


The 4 Stroke is better than the two stroke in These area/Areas..


The 2 Stroke is better in these area/areas

Lightweight
Smaller, much smaller size
Easier to install for sure
Starting
Cost


If the 4 stroke can be made to fit as the 2 stroke does now..And.IF the 4 Stroke can be made with a quite drive train and pedal start..Then..It will be a winner. It will have taken over the 2 strokes domain..As of now..The 4 stroke is better in some areas....But is not the winner at all. The 2 stroke also has many superior attributes. The 2 Stroke is also around 100usd less. I can see that the 4 strokes have potential. I will get with engineers to see if we can correct these short comings of the 4 stroke. At the same time.. Improvments to the 2 stroke are being made also.. Better linings...Roller bearings for the Piston wrist pin ect...So.. Let the Battle continue !!!!!
For right now..The 2 stroke is still the winner...But..the 4 stroke is catching up...
G

Plus, I like the "gray market" aspect of the two stroke!
T

ok..I just finished riding my new 4 cycle..and then jumped on the 2 cycle..The 4 cycle is louder and makes a little more torque...When I then jumped on the 2 stroke, it hit me...What a Jet !!! When it gets on the pipe..It seems to jet around..Where as the 4 stroke is more..Well..Tractor like. The 4 stroke also shakes and vibrates more..Quit a bit more actually. And..The slenderness of the 2 stoke..Wow!! The 2 stroke really does spoil you... Fast..Jet like..Lean and slender...Handling is better..Not only because the 2 stroke is lighter, but the fact that it is so slender and a lower in the frame providing a lower center of gravity. I am not sure those are things that a 4 stroke will be able to overcome... We shall see......For now..The 2 stroke wins.... Hands down !!!! My verdict is in !!!!!!! I still have fun on my new 4 cycle..and will continue to test my new tractor...lol... This is too much fun for sure !!!!

I purchased a Grubee 4 stroke kit about a couple months ago and am using a Honda GXH50 motor. Mine makes the same loud whining noise as dax has noted with his. The Grubee motor mount has an adjustable motor mount and it looks like daxs mount is not adjustable. I have been running it as a dry clutch but I have heard that it could also be run as a wet clutch with the gear box filled with tranny fluid. Here is the link to that info. http://edited-out, see below/SKYHAWK-STAGE-2.html
Do any of you think that this process would help any to quiet down the whining coming from the gear box? Other than the noise I have no complaints about the Grubee kit or the Honda GHX50 motor. 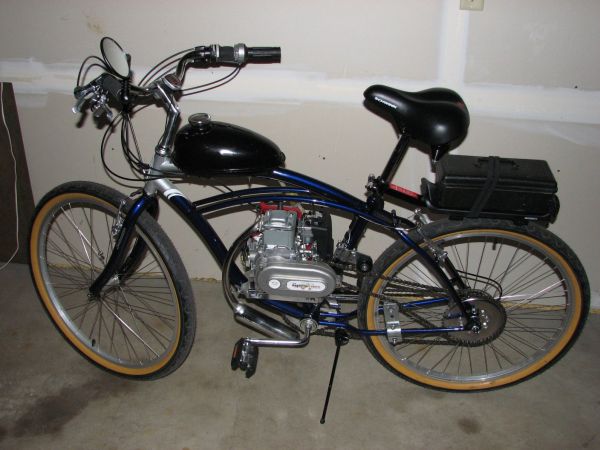 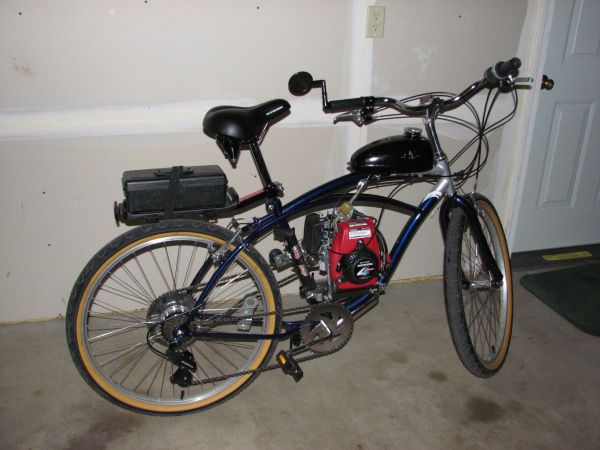 butch, you may have missed the hoopla, but we're not sharing links with that guy 'round these parts, sorry 'bout that.

nice looking bike, tho 8)
B

T
Got it assembled, it sputtered, ran for a few seconds then died
2 3