I'm devastated to report that my one-year-old Motorized bike has been stolen from my backyard. The bike itself has all the paint scratched off of it, and then some type of clear finish - it was that way when I got it. The cranks don't match each other (one is metal, the other plastic), it has a black metal wire bike rack, an electric turn signal, black plastic Planet Bike fenders, a generator kit with the standard front and rear lights, and a bicycle computer. There is a pair of blue rubber gloves and a 10mm wrench hanging from a string inside the seat tube.

If you see this bike for sale, please contact me anytime.

Meanwhile, the plans for the next one are heating up!!

are you posting this on your local graigslist also?

tomorrow you'll be able to upload a pic here if you have one.
A

I posted on craigslist the day it was stolen and got no reply. Also, I did some wide sesarching on craigslist, and found what I thought to be my bike for sale (it was a crappy cell phone picture or something). I met with the seller, and it was indeed not my bike. Sad as I was, I bought the old machine from him - it looked like it had seen at least a couple years just sitting someplace, outdoors? I had pedalled an analog bike down to meet him, and was faced with the challenge of walking between two bikes - does anyone know if there is some sort of simple towing bar that would allow a rider to tow an unused bicycle? It would be really handy for bringing a bike to meet someone coming in on the train for example.

Anyway, I worked all night through last night so I could have a few hours today to experiment with my new purchase. The aluminum and just about all the exposed metal had oxidized pretty badly - cables stuck and one broken, tires... I couldn't believe they held enough air to make my walk home!

Once I got the essentials free and functioning, I inspected the gaskets, and noticed the exhaust gasket had blown out on the bottom. I happened to have bought two gaskets from Kragen (the guy behind the parts counter let me go behind the counter and peruse the gaskets) the last time my old bike had blown its exhaust gasket. The ones from Kragen (part number at home - will post if I can find it) have a metal layer with a man-made cloth-like thin layer on the top and bottom. I think he said they were EGR gaskets for a Hyundai? Anyway, with only the slightest modifacation to the holes, and saturated with High Temp gasket seal, they last several months. So I put one in the 'new' bike.

By the way, this bike says American in a cursive decal on the side - never heard of it, haven't done any researching - it's a heavy, clunky mountain bike with crappy mid-eighties(?) hardware, that was all rusty. Turns out I have a penchant for rubbing motored bikes down until they're spotless! What good luck for the old American.

While cleaning, I noticed that both the front and rear motormount brackets were broken! Both of them! One side was intact, and loose on each of the brackets... I began to understand the abandonment.

It's amazing what a rag, some hardware, and a can of WD-40 can do for an afternoon. After draining the newly polished stock black half gallon tank, I removed the spark plug, sprayed a good blast of WD-40 in the hole, pulled the choke all the way up, and started pushing the bike slowly to see if the piston was frozen - not the case, free as a bird! I pourd a couple of cups of gas in the tank - no fast leaks - and took her to the road. After pedalling slowly up and down the block with the choke on, I saw fuel in the original, dried out clear (yellow) line, so I dropped the choke to half mast, pedalled up to about 10 mph, and the instant I popped the cluth, it started.

It threw the chain in the first block , and I saw that the tensioner had moved out of alignment. It looked as though this had happened to the previous owner at least a few times. I had tightened the tensioner brackets, and even added a second brand new M6 nut to each one, but it wasn't enough. The tensioner system is the weakest link I think. I pulled two links out of the chain, screwed the tensioner to the frame, and I just got back from a mile-long, pedal-free ride that I though I might not have so soon.

I wonder what's happening to my bike right now. Maybe they've finally run the fresh half gallon of gas out of it, and they've refueled without mixing, or maybe even worse things...

The picture of my old bike that I want to post is my desktop pattern - I'm looking at it right now. Only, I can't seem to find the file no matter how I search... might have to post tomorrow... along with pics of new bike!

sorry for your loss.


srdavo said:
I've got a 24 volt currie electric kit. has great take-off....tops out at about 18 mph. and you get about an hour of battery before ya have to re-charge. here's a pic of my tractor/trailer....I'd just towed another bike home with it 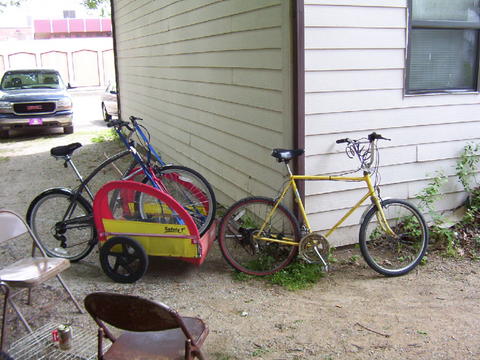 the pic doesn't show the motor...i'll try to locate one.
Dave
Click to expand...

I've been looking on craigslist for a trailer for a couple of months now - I think it's the wrong season to buy a trailer!

I finally just snapped a screenshot of my desktop, and made a picture of the bike that was stolen. Here it is: 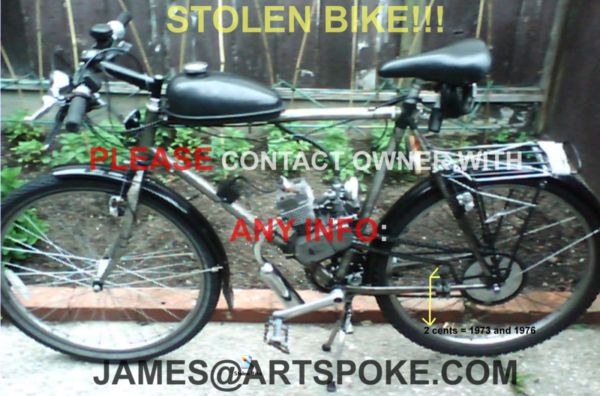 The new bike is getting smoother and smoother! Other than a small leak in the gas tank, I think she's roadworthy! What a blast these little engines are - I'll always have one, well, at least one...

Did you have your bike locked up? What a bunch of crooks!

that sux, man. we're all sorry.

you said, "I wonder what's happening to my bike right now. Maybe they've finally run the fresh half gallon of gas out of it, and they've refueled without mixing, or maybe even worse things... "

ive had non-motorized bikes ripped from me, and i cant help you find it. but maybe it'll help ease your concience if perhaps you just try to concentrate on its locale (looks like you off to a good start), and not stress over the "maybe's" and "what-if's". i know i'm not in your shoes right now, so that's an easy thing to say.

good luck! keep us posted
A

I'm ashamed to admit that the bike was not locked up. It was in our back yard, beyond a gate, underneath the stairs. The funny thing is that there were two other non-motored bikes back there as well, and they weren't touched...

Really, it's been a lot easier dealing with it now that I've got the replacement to ride/work on. As long as I can get a little greasy - it's been a good day.

Thanks for the support!
M

sorry to hear that, man. Some people can be heartless....

i remember someone mentioning wanting to be able to tow another bike, bingo


Also, if it ends up on ebay, i'll give you the heads up
A

Thanks - but I think it's safe to say it's gone now. Well, the new machine is finally an improvement over the old one! I finally got all the kinks sorted out, and now she's purring like a kitten. I LOVE THESE LITTLE ENGINES!

New bike build, what about adding a pull starter? and more.
2