Rolled the old girl out of the shed today, first time in many years...

Used to be an active member here. Way back in 2008, gasoline went to record levels (just a few cents from $4 a gallon in tulsa) and at the time I drove an '89 chevy truck that cost over $120 to fill up.

That $110 BoyGoFast engine kit on Ebay seemed like a good idea. Bought it, installed it on an old mountain bike, rode it quite a bit, crashed it and broke my hand in three places. I healed up, and went even farther down the rabbit hole of motorized bikes, transferring the old BGF motor to a different frame (Which worked better) and ended up building a motorized bike using a 79cc blue Harbor Freight motor, a friction drive with a 2.75" roller. I ended up taking it apart and using the pieces in something else, it was difficult to ride. A year or two later, around 2011, I purchased a GEBE kit, using a 32cc Tanaka two stroke. It didnt have the torque of the 79cc HF motor, or even the 66cc BGF two stroke, but it was very smooth, and better balanced side-to-side on the bike than the HF engine was. My wife and I went on a few rides, her on the GEBE rig, and myself on the pretty banged up and filthy BGF equipped orange bike. She could easily outrun me. We ended up moving from the Tulsa city limits, to the middle of nowhere, and didn't have much time to ride anymore. In addition, when I did ride, I was riding one of these two "motorized bikes": 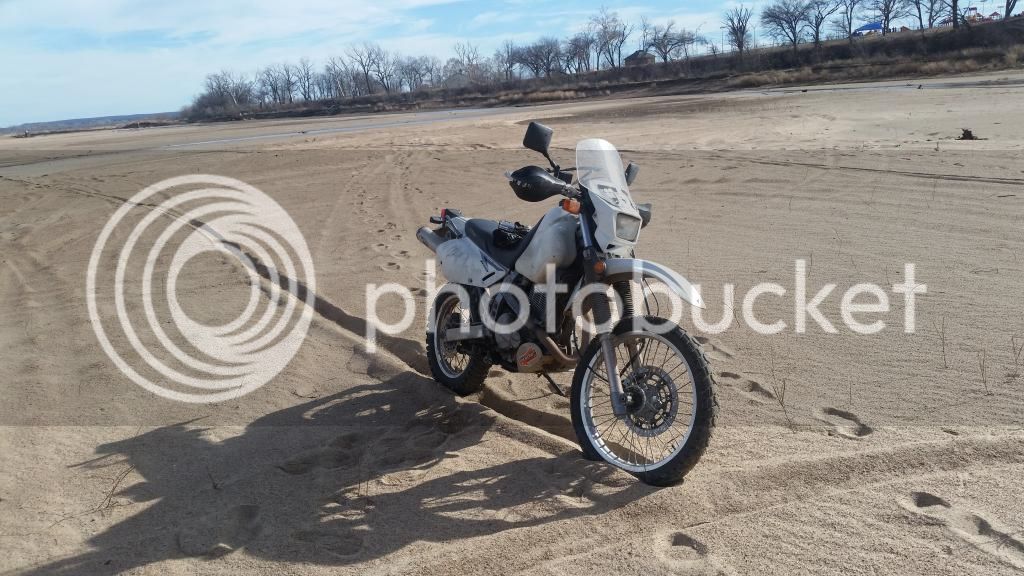 Suzuki Intruder 1400 (Brought to me on a trailer, in pieces, with the words "I think all of this goes to the same motorcycle") 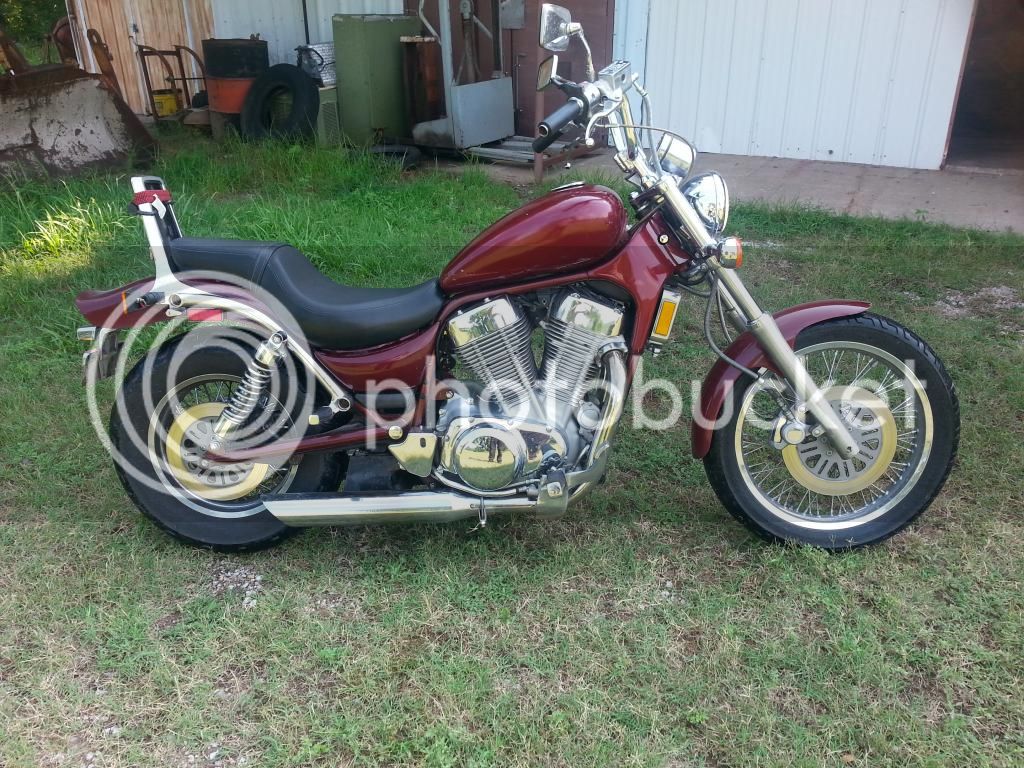 Fast forward from 2011 to 2015 - Wife is away with the new baby (20 months old) and I have a rare day to myself. I finish mowing the lawn, and see the old, banged up and filthy bike in the shed. I decided to install my new sprocket I made (I made a 36 tooth sprocket using a CNC laser and never installed it) clean the carb, and see if the engine would even turn over, much less start.

Here she is after some work on the carb. 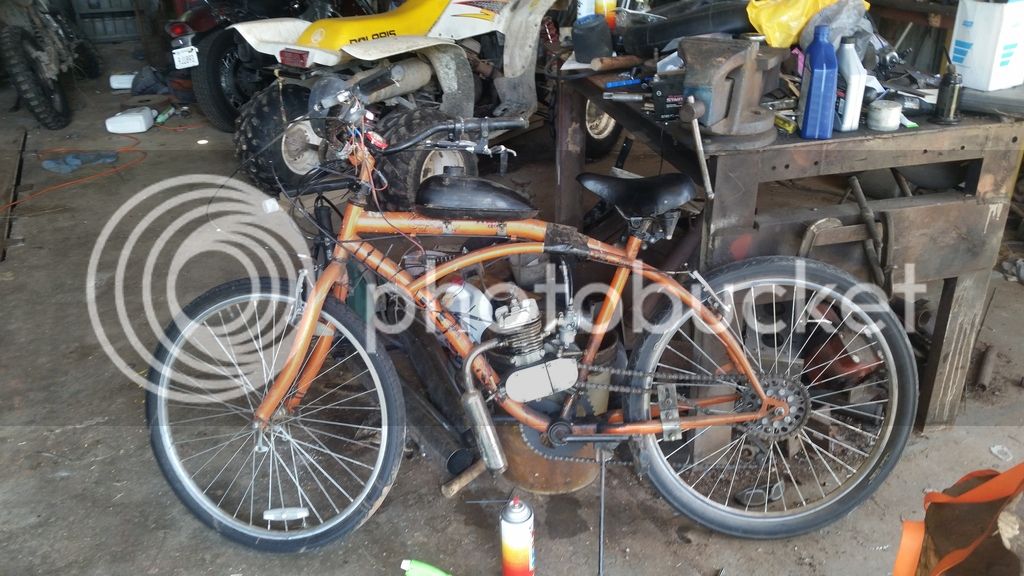 My sprocket - 10g carbon steel, may not last long but the engine isn't very powerful... who knows? 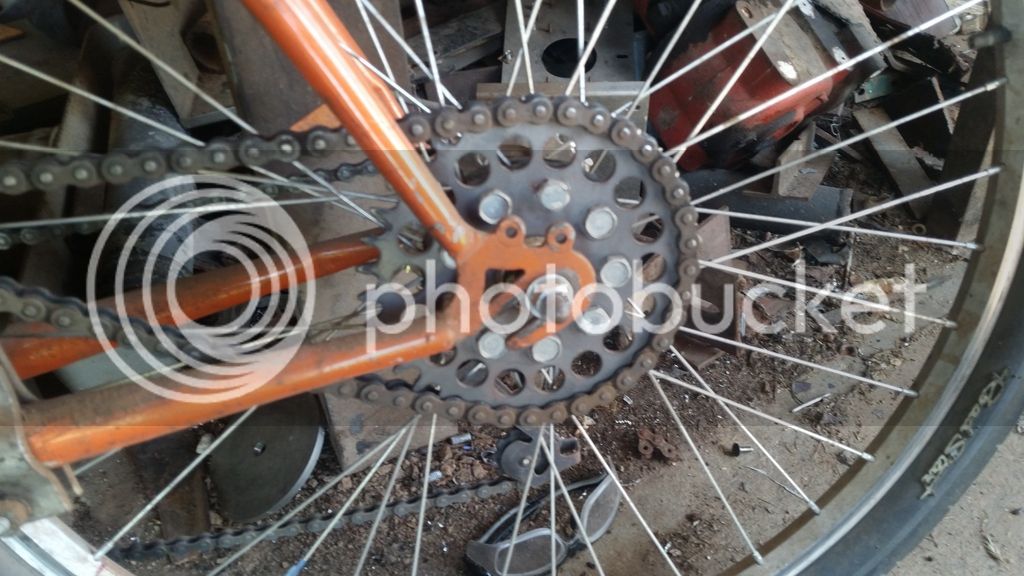 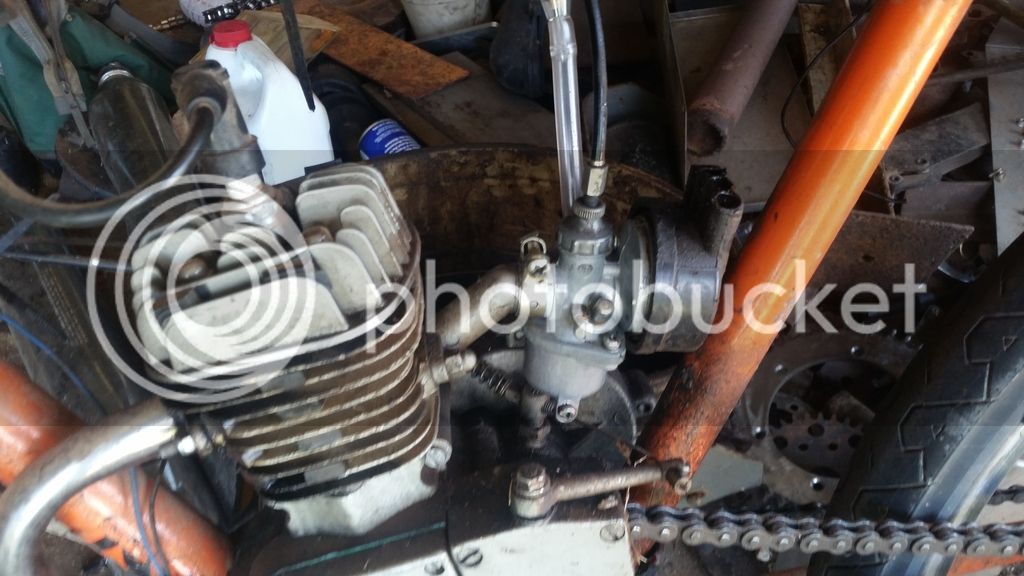 Wait... I did something wrong here... 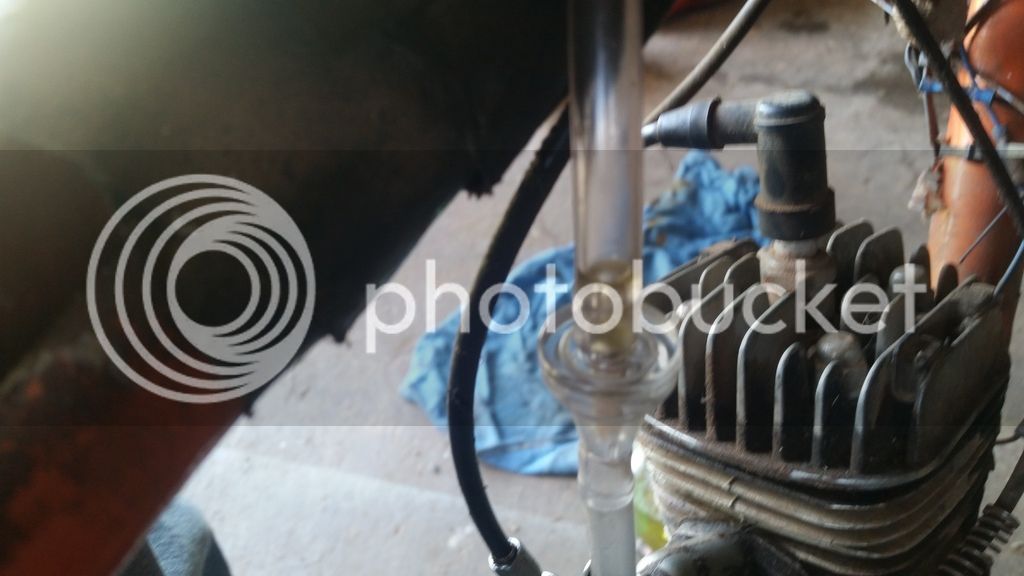 I aired up the tires, rolled the bike out of the shop, pulled the clutch and pedaled off down the road. Put the choke on, and dropped the clutch expecting the engine to either spin freely with no compression, or stop the back wheel dead due to being seized up. To my surprise, the engine turned over fine, and even tried to start. Felt like good compression, but it just wasn't quite firing up. Back to the shop... and the carb isn't getting fuel. Fuel is coming from the petcock, but not making it to the carb... I unscrew the fuel nipple on the carb, and sure enough it's blocked. Stuffed a torch tip cleaner through it, and I could see through it again. Put it all back together for another attempt.

Back into the road, get it going at a good clip, drop the clutch.... she lives! Fires up, the familiar sound and smell bringing back adventures of years past. The engine sputters a bit, but after about 50 yards it clears out and starts to pull as if the past few years had never been. I take off for the local gas station/convenience store/bait shop. The road is terrible, but the bike is running along just fine. The brakes could use some attention. I go a couple of miles, to the first stop sign... I start to slow down, and the clutch doesn't let go. I roll to the stop sign, and diagnose the problem. Two of the three screws have fallen out of the clutch cover, so the cover flexes instead of the clutch moving. I attempt to pedal, and she's locked up tight - won't even spin the motor. A closer looks reveals that the right-side nut on the rear axle has come loose, binding the wheel against the frame. I move it back, but since I haven't any tools except my knife, I remove the master link on the drive chain, hang it out of the way, and have a nice two mile walk in the sun.

A nice re-introduction to motorized biking for me. Hopefully I will have more time in the future to ride.

Well.......that's pretty neat. I joined not long after you did. In the meantime I've come and gone as far as motorized bikes are concerned. I also still ride a pedal bike a lot and sometimes I go for a while with no motor.

It's cool how you got it started up with a bit of tinkering. The whole clutch issue is a shame. But stuff like that was bound to happen, I guess.

Wow. You did a great job on that intruder. A friend of mine had the 800cc version. I know you like the motorized bikes, but I could quickly get addicted to that DR650. Its one of those "do it all" bikes and doesn't have a silly fairing like a KLR.
T

wheelbender6 said:
Wow. You did a great job on that intruder. A friend of mine had the 800cc version. I know you like the motorized bikes, but I could quickly get addicted to that DR650. Its one of those "do it all" bikes and doesn't have a silly fairing like a KLR.
Click to expand...

I used to have a 2008 KLR, and I thought it was great - until I bought the 2009 DR650. This particular specimen has a few modifications, to include a flat-slide pumper carb, FMF powerbomb header, stage 1 cam, supertrapp silencer, 3/16" aluminum skid plate, Moose barkbusters, LED lighting all the way around including the headlight, and a 4.9 gallon IMS tank. It's still not the fastest bike around, but it is... the best word may be "abrupt". Normally a big 4 stroke single has a hesitation when you twist the loud handle, but nothing like that here - I can get the front wheel in the air in third gear. It will go anywhere you point it, and worse than that, it is nigh-upon indestructible. I once entered it into a short Enduro in Stillwater, OK. I rode the bike 100 miles to the race, rode the bike IN the race, and then rode it home.

The intruder is nice on the road, but it can be a handful. I didn't know it at first, but it was supposed to be suzuki's "Muscle bike". It's quite a bit faster than the DR650, and I think quite a lot faster than the EX500 I used to have. The guy who had it had pulled it apart to determine why it would only run on one cylinder. The valves, pistons, cylinders, all were perfect. I assembled the bike, and found that the jets on one of the carbs was completely clogged. Once I fixed that, I had a brutally powerful bike, with a clutch that could not handle what the engine put out. Ordered some stronger springs, and had a 600 pound bike that could do wheelies.

As for the old girl in the shed... I bought three new clutch bolts, and while I was at it, four new ones for the magneto cover. With a judicious application of loctite, I reinstalled them, tightened the wheel down (more loctite there!) and pedaled out again for a ride. The new sprocket allows the bike to move at a much better clip, without spinning the engine to pieces. The old sprocket was a 44 tooth, and I think I could get 27 MPH from it before the vibration was just too much. I need to charge up the headlight battery and see how all that still works - I pilfered a forklift headlight from the trash some years ago, the company I worked for would simply unbolt the light, and toss it, when it burned out. I put in a new bulb and had a killer headlight. A 5 Ah 12v alarm battery would keep it lit for over an hour and a half.

Mounting pin falls out of throttle, now what?

Bringing the Old Girl Back to Life

Petrol vs electric in the UK.