Setting up a PHBG carb for the first time, any tips?

So I picked up a new KTM50SX carb aka the PHBG along with a handful of jets. Finally got around to installing it today and of course it's off to a terrible start.
It fired up on the second try, and seemed to rev much harder but it quickly started stumbling like it was over fueled then died. I kick started it for about 5 mins, trying both the choke on and off (mostly on) and moving the idle mixture screw from all the way in to all the way out. With it at the default setting the only time the motor would fire was when pedaling at about 10-13mph and only at full throttle. The moment you dropped from 100% throttle it would die. So I've gone ahead and put my 2nd smallest jet in (80) as the factory one wasn't marked but looked to be near the size of my up 90s jets.

At this point I've put the NT carb back on as I'm sick of working on the bike today, so I figured I'd do some research and ask some questions in the meantime.
Before anyone suggests, I've found the moped army guides on these carbs and so far it's been helpful. Honestly, these questions could be pointless as I haven't tested the jet change yet. Installing a new/used rim + tire/tube + hub adapter (which has already slipped a tiny bit after the bike fell of its kickstand in the middle of the hardest kickstart I've ever done, bending the f***ing spokes a bit....) and getting it all mounted with a derailleur that won't stay in place has my back hurting and my patience short.

Do I need to connect the 2 brass barbs that point down to anything? Or are they just vents that require a short length of tube? 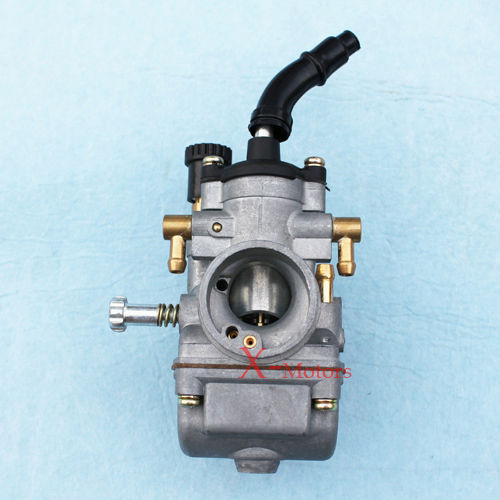 Do I need any jets other than the main? I have the 5x8mm set from here
https://www.amazon.com/gp/product/B077BWHCLC

As I'm typing this I realized that I never adjusted the needle from the stock '2nd from the bottom' setting. I'm willing to bet with the smaller jet and the needle moved I could probably get this thing to run.

Anything I should know about these that might make life easier?

EDIT: I should mention that after putting the NT back on, it took a bit of revving to clear out the excess fuel/oil from the motor. Probably was just the rich af jet.
Last edited: May 24, 2019

How To Tune PHBG Carburetors

Before anyone suggests, I've found the moped army guides on these carbs and so far it's been helpful.
Click to expand...

They are very informative guides, once you have it running and idling. Completely useless if your not up to that point with the carb, be it over/under fueled they cover nothing until "Once you get it running" so I thought I'd get the kind advice of people who can respond, vs headbutting a guide over and over again until something just works.

Sorry no help but I had to do this...

How To Tune PHBG Carburetors

I found that article to be very useful if you don't know much about that carb. Knowledge can help you to figure out what might be going on instead of being clueless.
E

It's not like I bought a carb without a shred of research, I read those pages back to front and front to back. However like most things, I thought maybe there were some tricks that could help which was a mistake to ask lol. Guess these carbs have no hints or tricks that help out, just a sterilized "once running do this or that".
So I shall ask a sterilized question: When a user is utilizing a 19mm KTM 50SX with an 80 jet that smokes lightly under 100% throttle, is this a indicator of the jet size being greater than what the motor requires?
Also, where would one procure a variety of needle valves for a reasonable cost/does they even make that much of a difference?
Otherwise ended up getting it running on an 80 jet, the idle mix screw doesn't seem to do anything so I've left it at roughly the stock setting. The choke is basically useless as the black cap you pull comes off of the stem, so far this hasn't been an issue. It's running great, seems to have a little more power but the motor still revs out at 8200 which is really starting to bother me. Other than rev limit, the throttle response is quite a bit better. Under no load it revs up far more quickly than with the stock NT. For only being sorta dialed in, I'm impressed.
Apologies if this comes off as rude, I've been getting told that I come off that way at times. I've come to greatly appreciate the nonelitist attitude that the motoredbikes forum has, and don't want to add any negativity to this circle. Most of the FB groups are toxic cesspits which is surprising considering the hobby, like cool your bicycle goes fast, no need to be a dick about it.

Edit: One final question : is it possible to have the needle too lean despite being on too rich of a jet? Just don't want to melt my motor because it's fat uptop but too lean in the middle. It's currently on the 2nd from leanest notch. I ask because its like I can hear the piston rings scraping more than usual, almost a shearing sound.

Thought the article might help with useful info, sorry if it offended anyone.

Darwin, he said he read that article in the first post. I was just joking with you.

Those hose barbs on each side are overflows.
Smoke can be rich, or fuel oil mix. Could also be it clearing the pipe if you have an expansion chamber.

Yea some times I miss things in a post. If it were me I'd start out with a jet recommended for your altitude by some guide or so. Then screw that mixture jet in all the way and back out 1-1/2 turns. Then start at the top adjustment notch inside and work your way down to the last adjustment notch. Somewhere you have to find a good running motor. With each notch used fiddle with the idle mixture screw and find out where it runs best. It's a new carb so adjustments should be the only issue in my opinion. What motor is this? In the guides there's different solutions if it's a 4 stroke or 2 stroke. Are you at 7000 ft or sea level?
E

I'm currently running it on a zeda motorsports poor boy motor which is a Zeda 80 with ported top end and a lightweight piston. I'm at 1,250 ft and running an 80 jet after reading a post from a guy in my area running the same carb on a similar 2 stroke with an 80 jet (he's since upjetted to 86, making me kinda question my choices).

Just doing that and playing with the mixture/idle speed screws to maintain an acceptable 2k idle (probably need to turn down the fuel, takes forever to return to idle) has made this thing run good. When cruising mostly on the idle circuit, starting on the needle (10% throttle) it has an acceptable amount of 4 stroking that goes away the moment I add more throttle. Revs strong until about ~8300rpm where it stays, it doesn't 4 stroke or miss.

I usually run 50:1 with synthetic but the last couple of tanks have been roughly 40:1 standard oil since I ran out of the synthetic.
The only thing stopping me from playing with changing out the jets is my petcock breaking in the open position.

Any recommendations for good spark plugs for a 80cc 2 stroke(Amazon prefered)? I need some fresh ones so I can do some plug chops, it seems rich but I want to be sure before I start fiddling with too terribly much. Seized one motor a few months back due to not enough oil, would hate to do the same by accidentally going lean trying to tune this. Thanks for all the input, it's been really helpful!

EDIT: Just did a 25ish mile ride with a friend on his nonmotorized bike, it's running very rich but part of that was running basically on the idle circuit and the very start of the needle. At about the 10 mile mark I turned the idle fuel screw in 2 turns which helped some but it's looking like I'll need to drop down to a 78 jet. To maintain 20ish I only need to just crack the throttle, next paycheck I'm going to swap the 36t for a 40 or 44t to make keeping pace with an unpowered bike less tedious. Also ordered a zeda 40mm mikuni cnc intake to replace the stock one, that should free up a little more power.
Last edited: May 26, 2019
Share:
Facebook Twitter Reddit Pinterest Tumblr WhatsApp Email Link
Top