Does anybody have any I can borrow?

It seems like everytime I start to do something, I end up doing ten other things and don't get to the thing I started.

Today 8:30 am, I had a "little job" to do- Brush hog the neigbors field and cut up some logs for him. That turn into sucking up some unseen barbed wire, which turned into an hour laying under the brush hog, then by the time I got it all out (bolt cutters/alternate praying and swearing/bloody hands) the front tire had gone flat from I don't know what, then back home to get the giant weedwacker to finish the little that was left... 2:00pm I got home and Mrs. Joe's minibike wasn't running right so I found the whole carb ready to fall off and while I was fixing that, daughter no. 3 pulls the go kart around "while I had the tools out" to have me adjust the brakes. As soon as she pulled away I heard a sickening sound of the rod snapping, and she had enough experience to shut it off right away....found out it was just a wayward bolt that had vibrated out of the aircleaner housing and fell down into the flywheel/fan/shroud. Now it was 6:45 pm.

I fired up the bikes and Randy the K and I went to the local cruise-in and were swamped by people asking questions and surrounding the bikes for two hours. 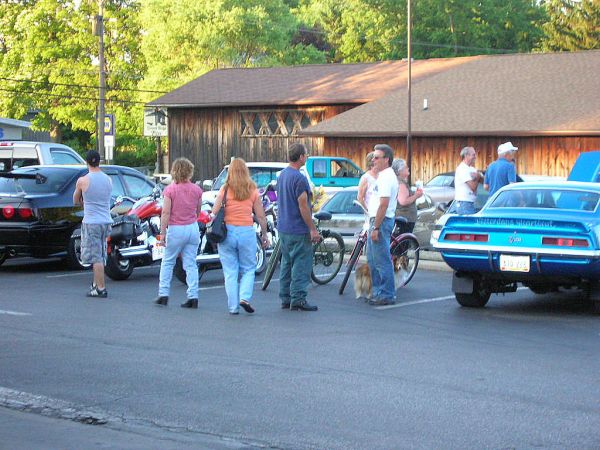 after that I made one trip around to look at some of the cars and then I said "let's take the long way home Randy the K". We did, arriving home a little later than was prudent because it was nearly dark..... O.K. it was 9:30 or so pm and I (finally) had my first meal of the day.

Tomorrow I start jury duty for God only knows how long.......good thing we went riding tonight! (only around 20 miles though, Randy the K hasn't gotten his riding muscles in tune yet.)

Thanks for listening,
Joe

Of course I WASN'T impatient with them and it was nice to be as much the center of attention as any of the cars there. We made a couple of "victory laps" around the parking lot on the way out.

The bikes performed flawlessly as usual, although Randy the K flooded the Western Flyer restarting it enough that I actually saw SMOKE from the exhaust for the first 5 seconds! He's learning......

Good show!
Was that dog checking out the rear tire?

Wow! what a day you've had :yuck: . but at least you did get some riding in. it's funny how people flock to the bikes, as seen in that pixture 8) .

on a different note...you know, you could have gotten out of jury duty really easily. all you gotta do is tell 'em, "I don't know what this is about, but i'm finding them not guilty, no matter what." then they say 'this way to the door, sir.'
G


at least you would be trying to fool them...
all I gotta do, is act naturally
G

joe, i'll sell you some of my free time, but i can only spare the "go to cool events" kind...
work and family is still yours to handle

might i suggest wearing a "Fry 'Em All!" t-shirt to jury selection?
G

Anyhow, I was found to be not fit for jury duty today, so I'm done with that.