ok I've put so much time and effort into the bike and only got 3 days of riding out of it.

I walked the bike with the sparkplug out to make sure it was sparking and it is.

I took the bowl off the underneath of the carb to find that it's full of fuel. so what the heck is wrong here?
E

I have been dealing with a bike that has always been hard to start and has always run kind of crappy with lots of misses and lots of playing w/ the choke to get it to run. Tonight after replacing the carb that I suspected might be the source of my troubles, I found that it was not the source of my troubles but instead looking down in the darkness, I espied an orange spark on the CDI wires where they passed against a metal tab. Pedalling back to the Lab, I discovered an electron leak on the blue wire, wrapping it in electrical tape and segregating it from the other wires kept the essential smoke from escaping from the circuit along with any stray electrons. This promptly changed the bikes behavior from British to something more Italian. Look for black discoloration on the blue wire where it touches metal or the black wire. Barring that check that your carb piston is moving up and all the way down, the piston if not aligned slot to pin will prevent starting until it does and then "whoa nelly" the little beast will scream until you kill it or it detonates.
G

well, i think edward's pegged it...ignition. i just had a very informative phone-call with a grubee parts vendor & one of the things he specifically mentioned was the magneto's vulnerability to moisture. i see you ride in the rain. i hope you solve this so i can know what to do, i also plan on doing a lot of wet riding.
S

already I guess I just need to keep messing with it and hope something jumps out at me - I'm really lernning a lot about this stuff as I go...
M

hey slideshow... guy i dont want to make you look stupid because i dont know if you did this already but try turning and adjusting the screw on the carb i had to turn mine almost all the way in, till the spring was compressed until mine ran good
I

try taking the kill switch out of the circuit- it's so cheap that it may be grounding internally when the vibrations get up.

also, make sure that all of your connections fron the engine to the cdi and cdi to spark plug are secure and covered (i.e. the connections aren't touching each other or the frame.)

i wish you the best with this as i know that you have to be ready to say ENOUGH! and chuck it in the nearest recycling bin
I

okay, this is what i just finished doing to mine and it really helped. i was having a problem with the engine sputtering when i opened the throttle all the way up- it bucked and jerked and sputtered like crazy.

i took the carb apart and cleaned it and assessed everything- i couldn't find anything wrong with it so i put it all back together and took a spin- same thing still. i then decided i would turn off the fuel valve and drive around until it ran out. this is when i made my discovery. when the fuel was running out, it coughed and sputtered just like when i had the throttle opened all the way up. i heard a bunch of noise around the intake pipe and when i looked closer i could see that when it coughed a blue flame shot out the bottom right where the gasket was. i determined that i was introducing air into the cylinder directly and that this is what was causing the poor performance. i was right!

so i got some cork and rubber gasket material (which i'm willing to share, by the way) and made a new intake gasket. i also got an o-ring (3/4x5/8x1/16 in size) and put it in the carb where it meets up with the intake tube. oh, and i also got another spark plug; i'd replaced the factory plug as it had fallen apart in transit with a random plug for a small engine (champion something or other) the one i put in today was for small engines too but it was bigger (i figured if its bigger it has to work better, right?) i rode it for about twenty min. with no problems. opened it wide up and it was smooth as could be. it was also a whole lot quieter. i did notice that it wasn't quite as strong on the uphill as it had been, though. i think i'll put the other plug in and see how that works with the new setup. i think we all know by now that the gaskets are pretty crapy and should be replaced for maximum performance.

don't get discouraged guys- this is all part of the fun! if i didn't have my bike to work on i'd probably go nuts
S

working better now, I don't know why the fuel leaks out the sides of the air intake...

If I fill the tube with fuel and close the valve, it runs until it runs out of fuel. If I leav the valve open, it floods and stops running - weird!
E

If the carb is flooding,remove it, unscrew the fuel inlet and remove the float bowl and the float needle. Clean the gunk off the needle and seat (you do have a filter?), check the float for leaks(ie. fluid in it) reassemble and check for free movement of the float (no burrs or catches on the shaft)
S

I took the bottom bowl off and the float was floating in fuel, the brass thing hanging down inside the float was clean and wasn't movable. I had a filter but it seemed to be preventing the fuel from going in so I took it off... I'll put it back on now i think...

I'll take it apart again and see if I can see anything that could be a needle and seat. can you point out needle and seat (by the numbers) in this pic? 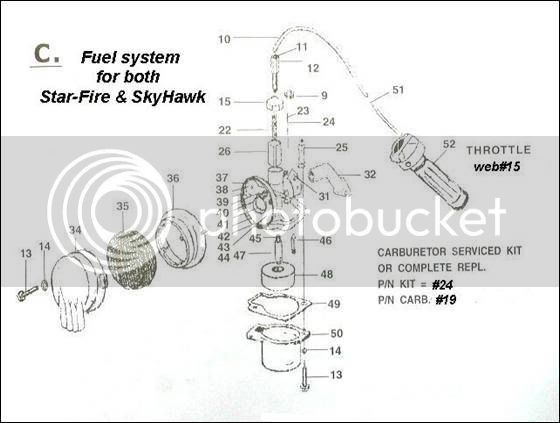 What carb do I get ? Urgent help needed !