The engine has been running good, so I figured I would make it not and got a windowed piston/g2 reed to install. What should I expect?

It's been a while since I've posted anything here, the bike has been running great and my time has been spent on a couple of different motorcycle projects.

Got a wild hair the other week and decided to see if I can't take advantage of the 21mm carb I'm running a little more by ordering a windowed high pin piston from mzmiami and 'g2' reed valve from aliexpress.

Now that they are both here I figured I should get around to installing them, so later this afternoon I will be doing just that. Since everyone reports sealing issues with this reed I will be picking up some permatex of some variety to make sure that I don't have that problem. The installation will be simple enough and I'm not worried about that, hell while I'm in there I might see about matching the case transfers to the head as they are really far off.

The thing I'm wondering about is how much jetting am I going to have to throw at this compared to where I'm currently at. From my understanding, you lose a fair bit of fueling by going from port to reed valve as the air only goes through the carb once instead of three times so I should need to jet up but is it just a little or a lot?

Currently, I'm in a weird spot with my setup as this carb is far too large for this build. Like when I ride around I NEVER need more than 1/8 throttle to accelerate up to speed and I just barely crack it open to maintain 30-35mph. I'm hoping that a reed + windowed piston might help out some by smoothing out how twitchy the motors response can be and hopefully give me some better low-end as there is none to speak of.

Engine details:
Zeda 80 'poorboy' from zeda motorsports back in March '19. Basically an off the shelf zeda80 with the jug ported to the maximum a consumer can easily tune for.
Accidental "opened up transfer mod" from piston ring catching transfer lip. AKA One transfer has a quarter-sized piece broken out of the wall on the jug, after cleaning it up it still runs great.
Generic CNC "high compression" head
~.5mm copper head gasket
mzmiami cnc wide bore 40mm intake (like the normal ones but super bored out)
mz65 pipe
Dellorto PHBG 21mm racing clone with proper au atomizer

Probably should replace the jug but I really can't be bothered as that means buying a bunch of tools and learning how to port the new one. Chances are I'll need to sell the bike sometime in January so I just want to check out what a reed will do for this build. I'll update this thread in a few hours with some pictures of how the bike sits right now and as I make some progress. I'm bad about taking pictures while working because I don't want to touch my phone with filthy hands.
Last edited: Nov 13, 2019

Got around to working on the bike today.

She looks a bit rough but under all the grime she's solid. 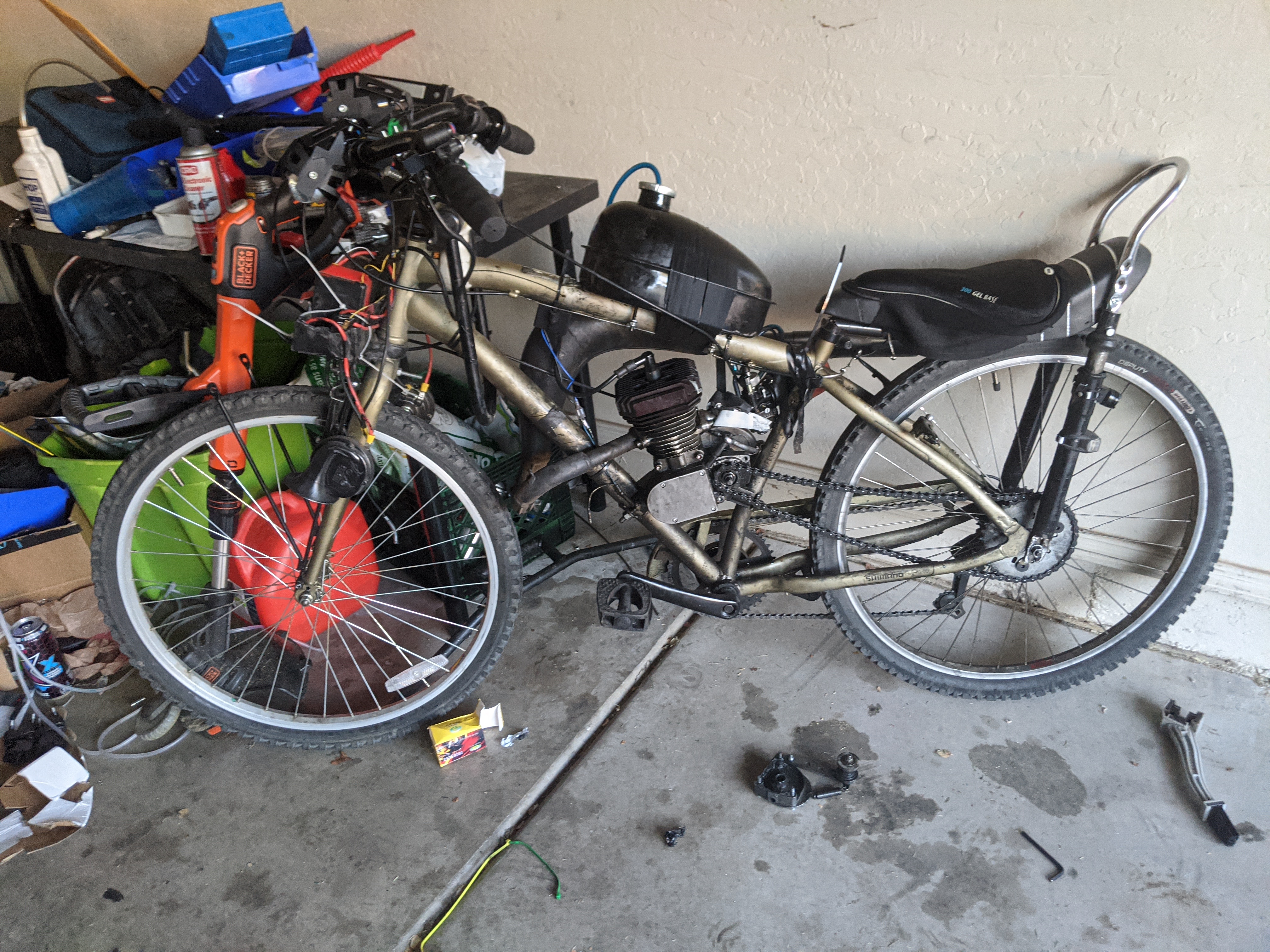 A quick look at the widebore intake along with the remnants of the tape I used to keep the plug boot on so I could get home the other night. 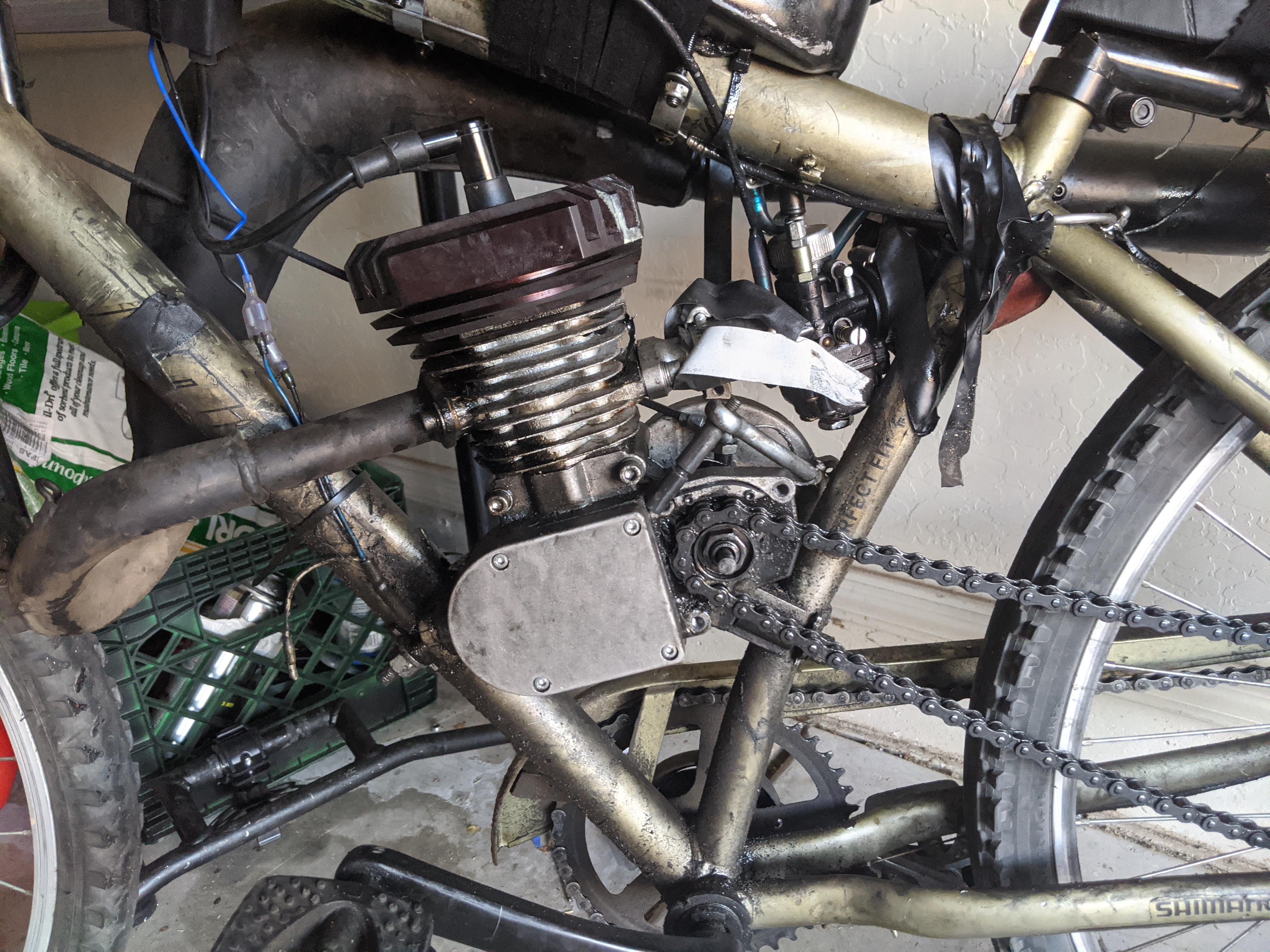 A zoomed in shot of the BEST $12 you can spend on one of these bikes. It's that bit of metal above the sprocket, it keeps the chain from getting bound up in the engine and snapping. 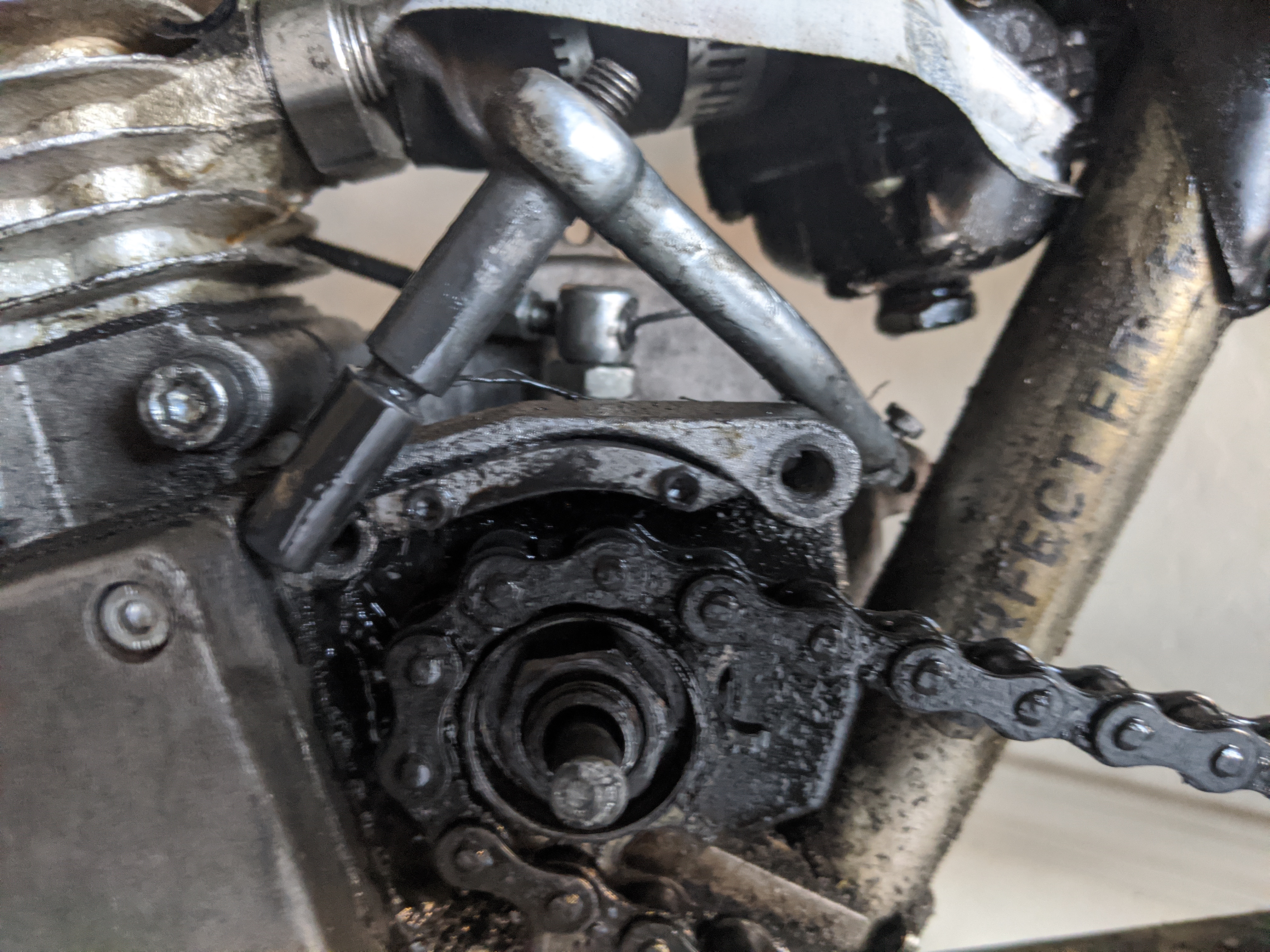 Not kidding when I said this is a widebore intake. 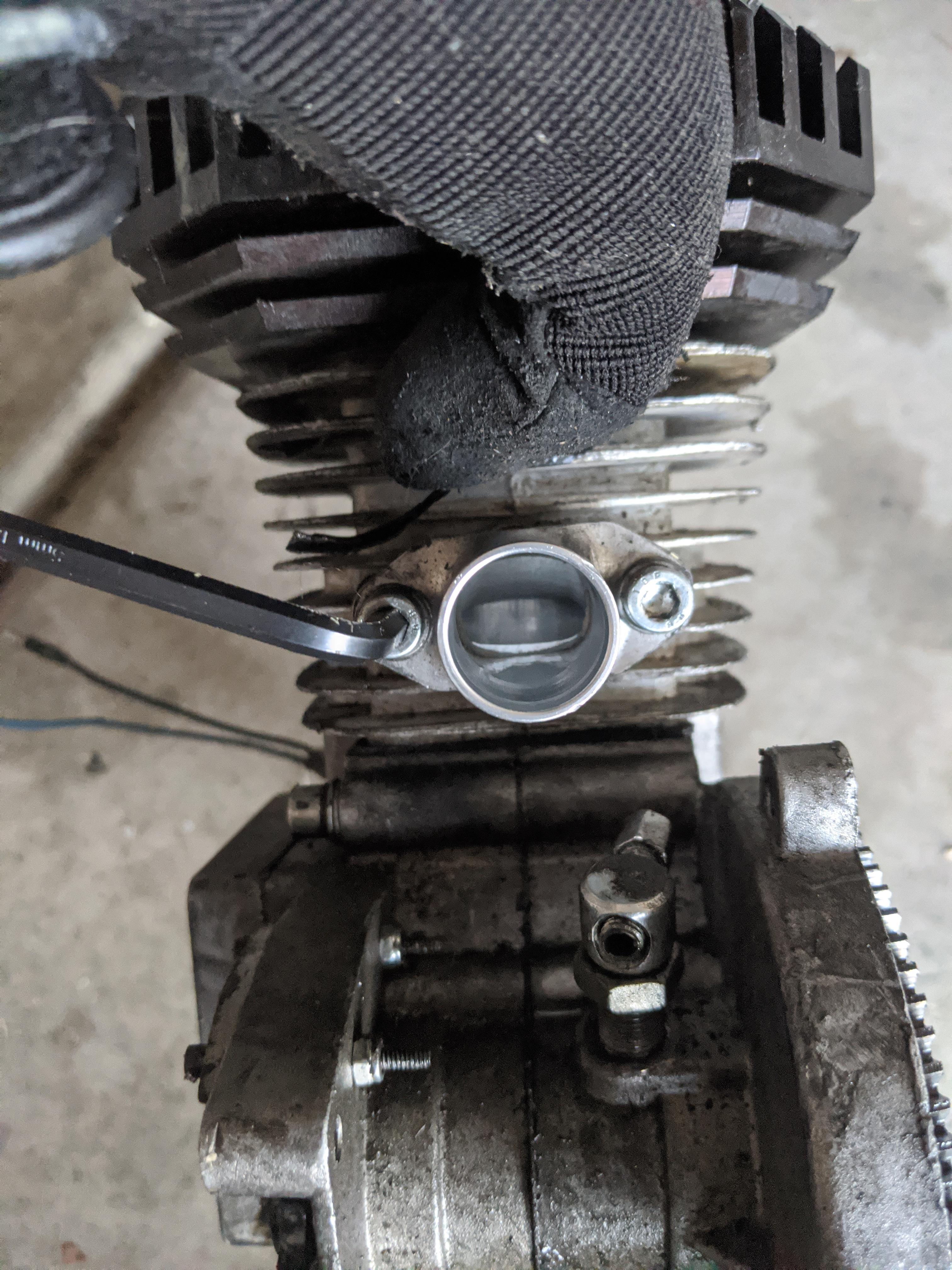 Off with its head! 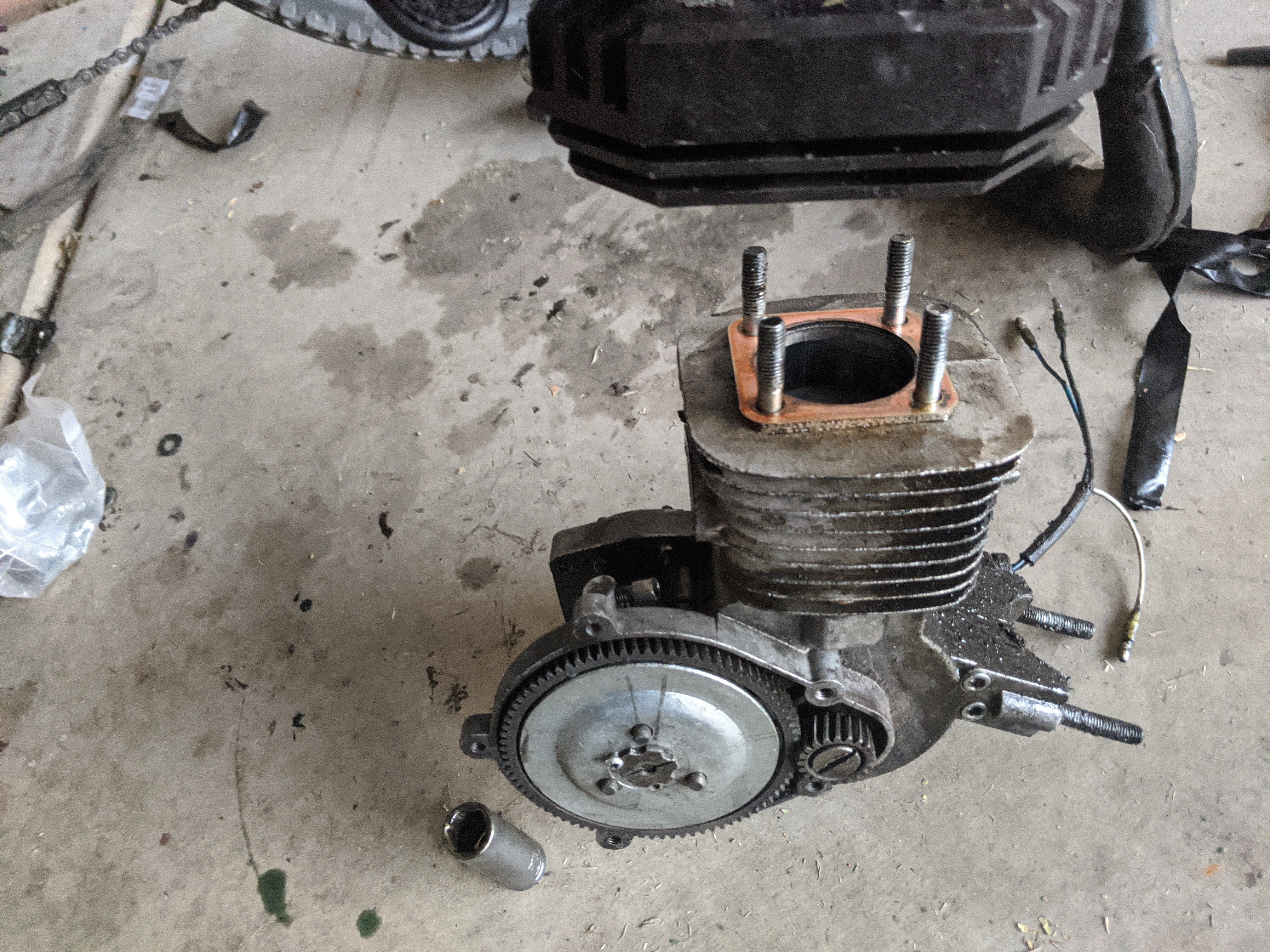 Quick look inside. The piston doesn't look too bad after about 4 months of use. The cylinder doesn't look great though... 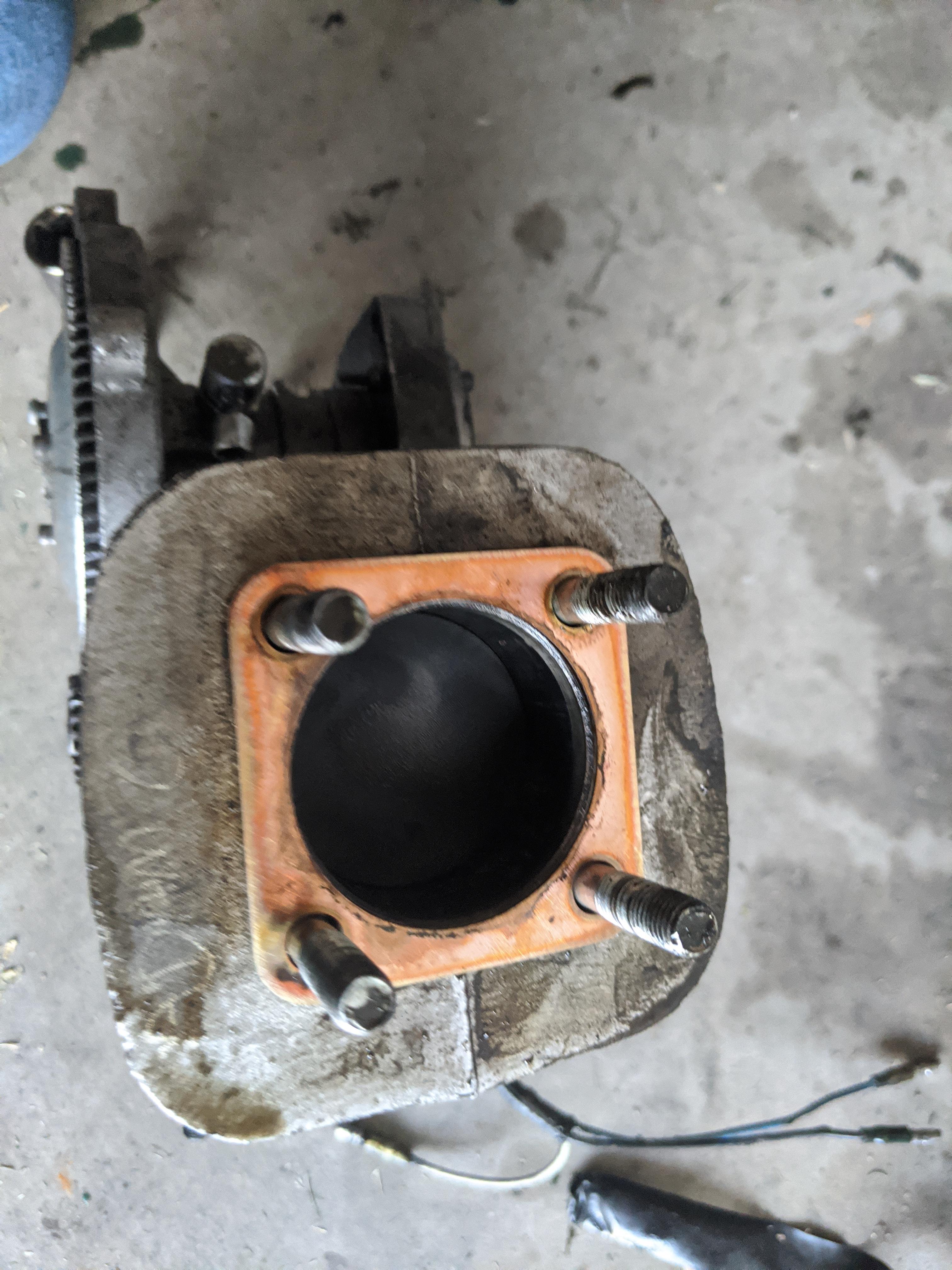 Closeup of the "high compression" CDH head after 4 months of use. Not too bad looking. 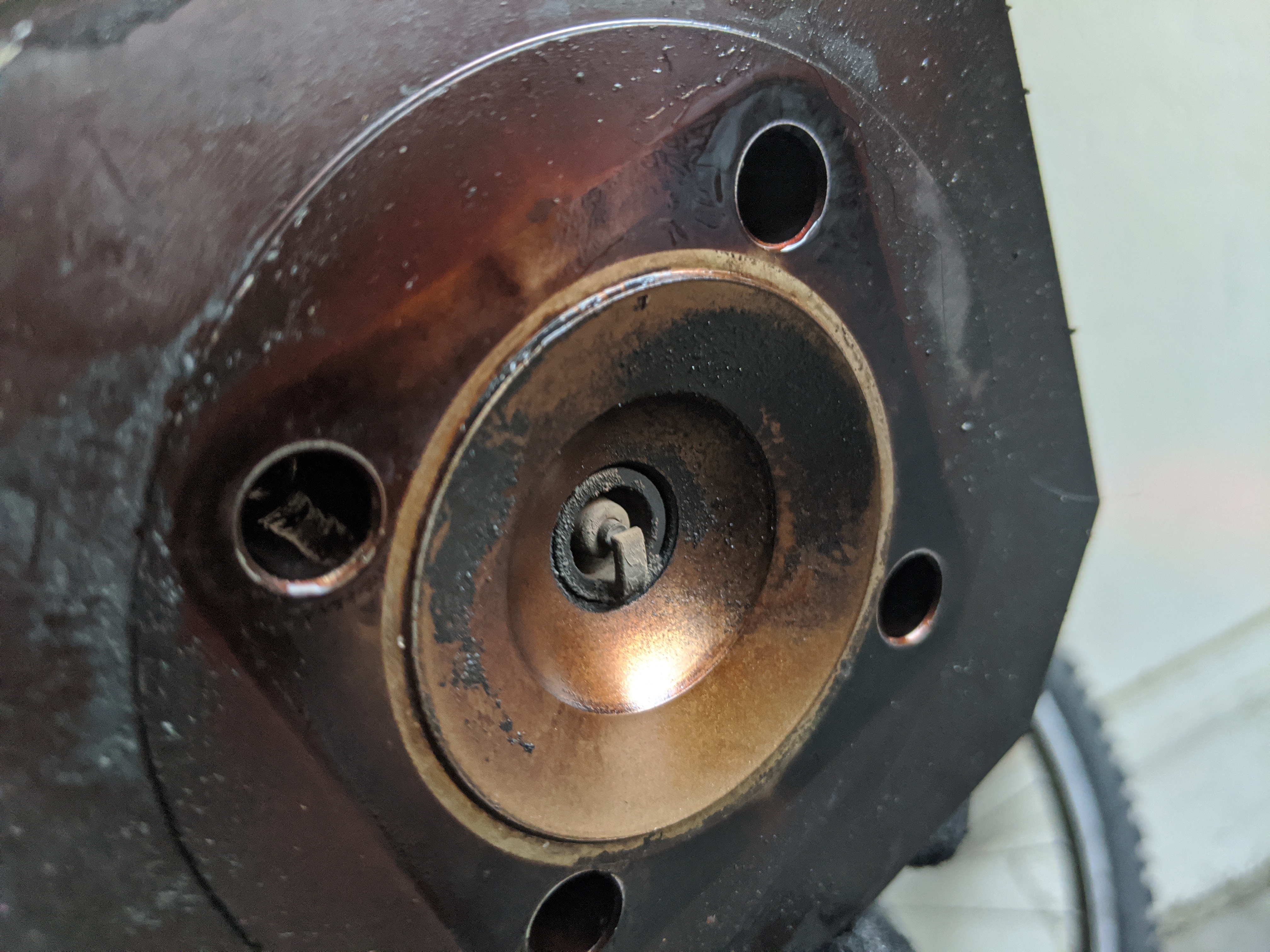 This jug has seen better days. That big chunk was created from one of the rings catching the edge of the transfer at 7500rpm. It destroyed the piston but I was able to salvage the jug by smoothing out the edge of the damage. 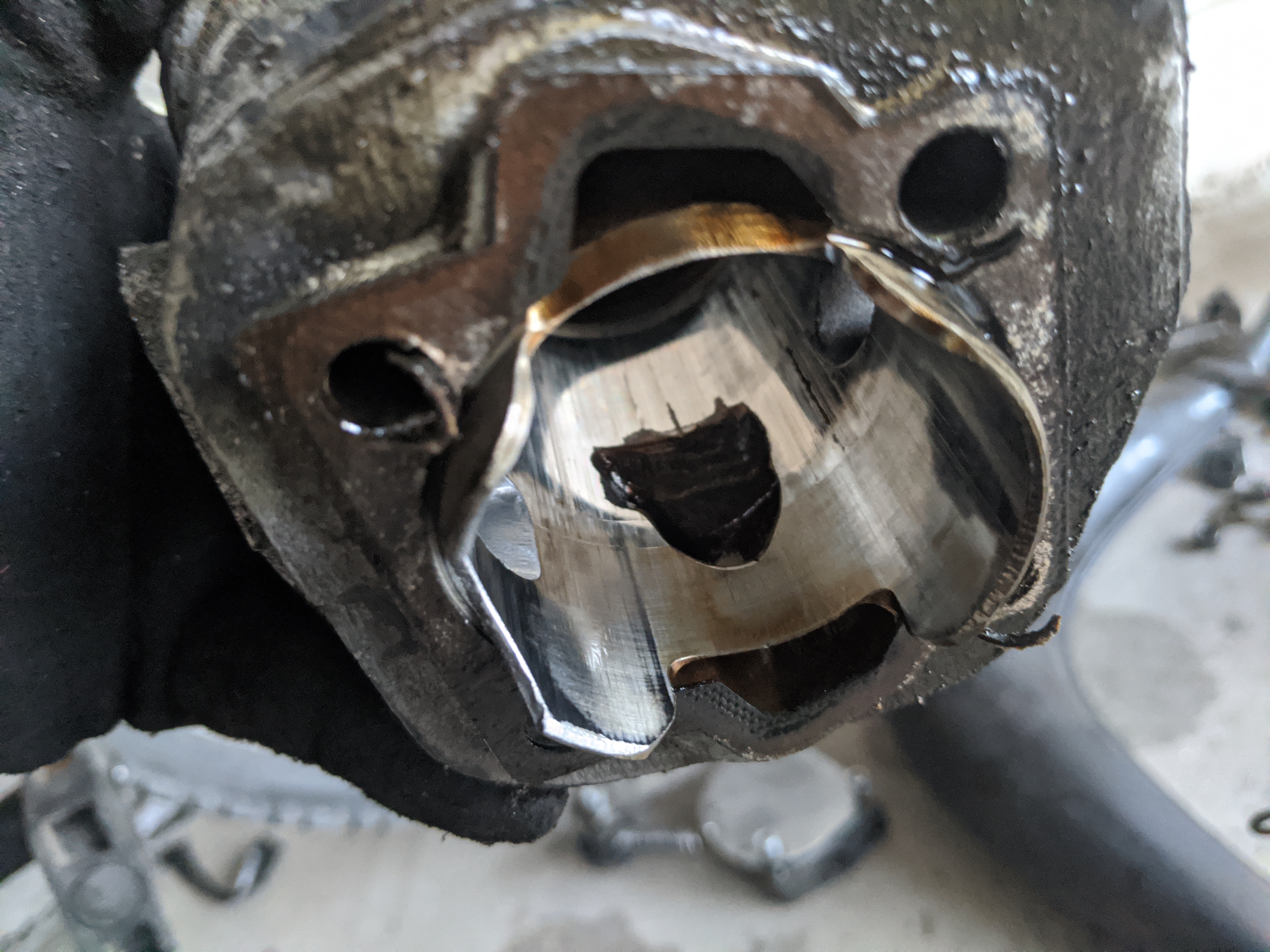 Looking like the chrome is really starting to fail near the top where the compression is the highest. I probably should grab a sleeved jug and start working on porting it sooner rather than later. 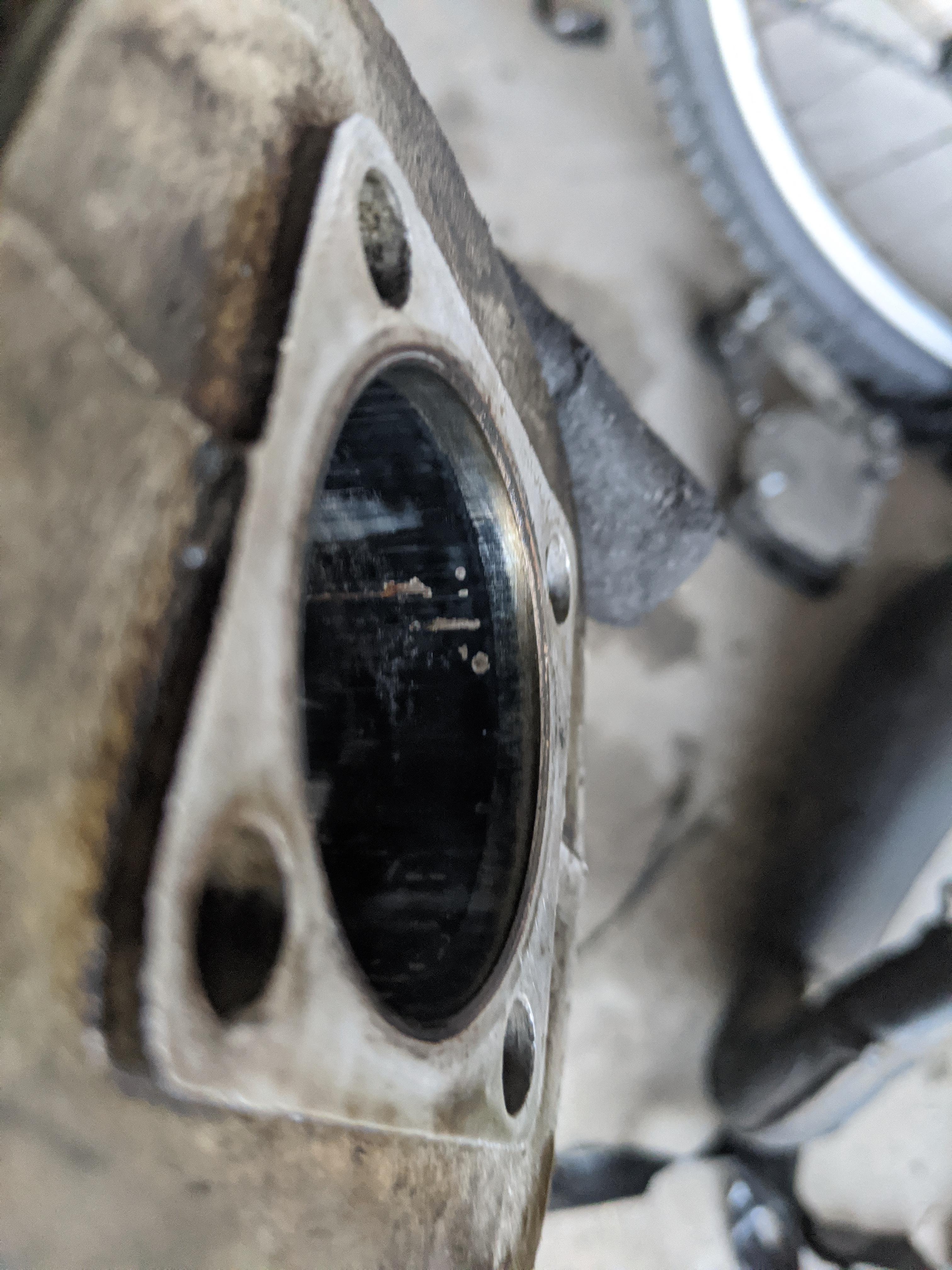 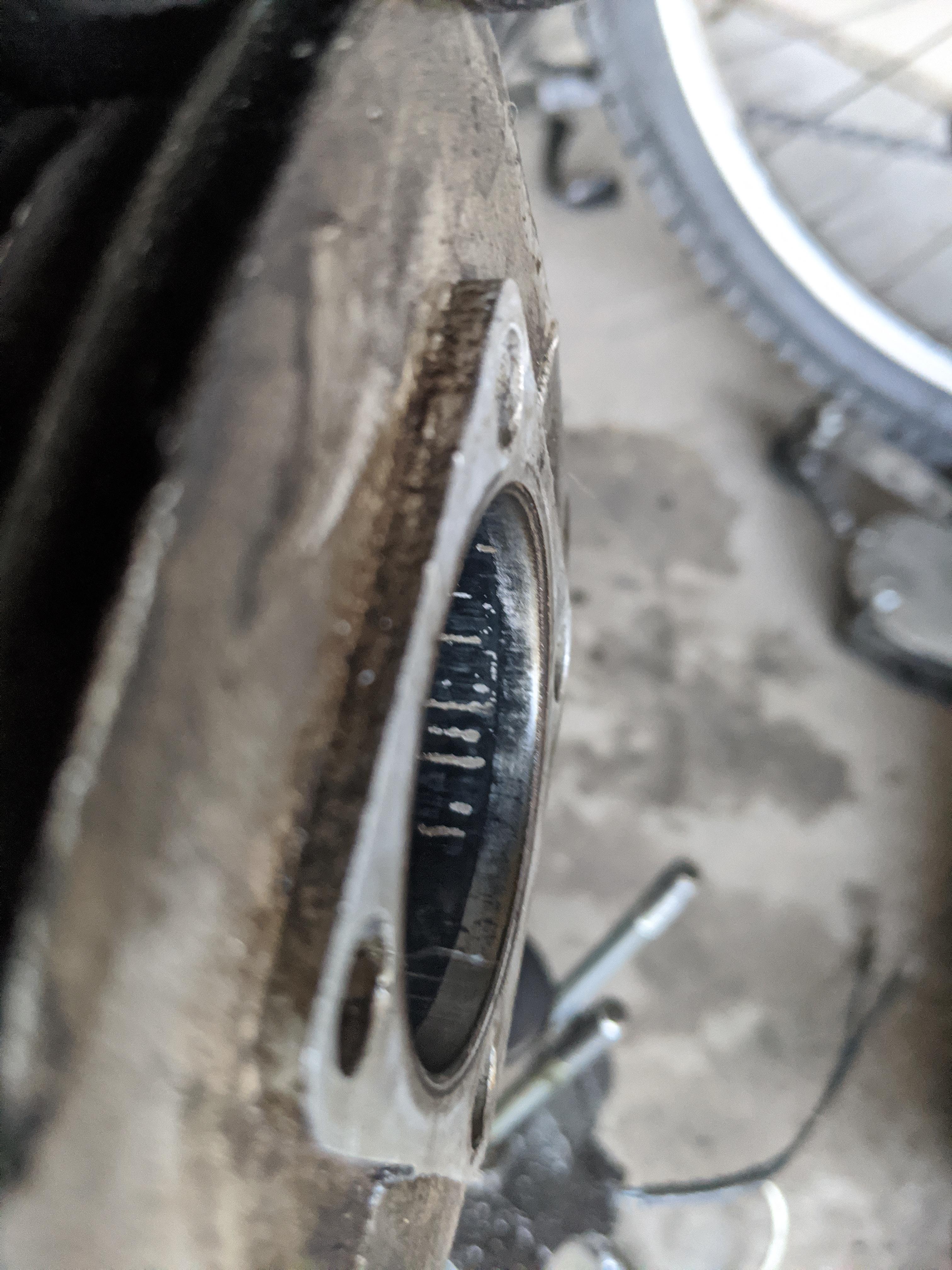 Better view of the piston, to my untrained eyes it looks like my mix is fairly good. The top was an even color until I touched it with my greasy gloves. 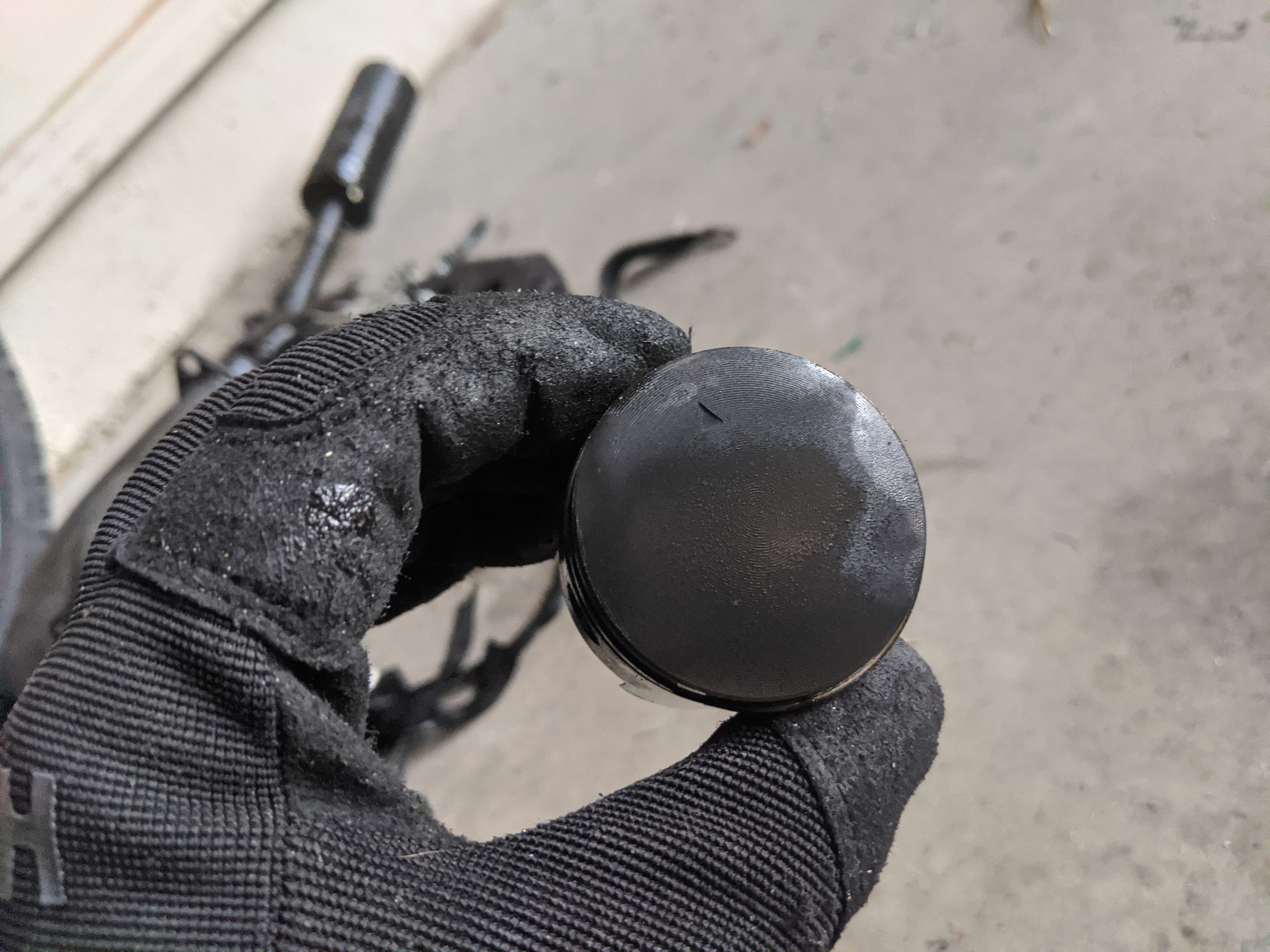 The underside of the piston, exhaust side is facing upwards. Overall the temps look to be good 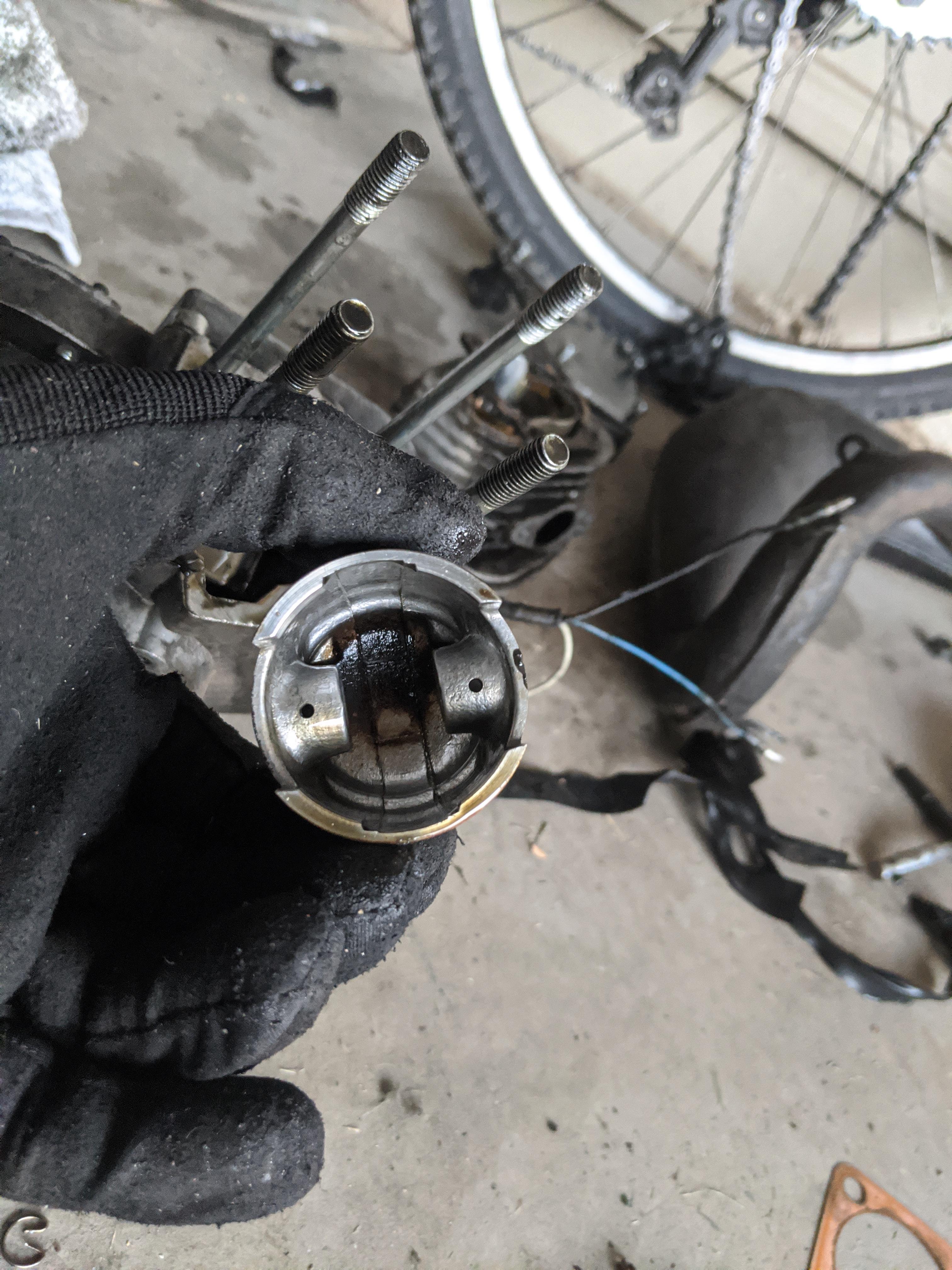 Here is where I should be able to get some easy gains. You can easily see on the gasket where the jug transfers and case transfers are quite a ways off. I attempted to match them a bit better with my tools on hand but was unable to get the job done with a mill file without splitting the case. Once I get a Dremel I'm sure it'll will work a bit better. 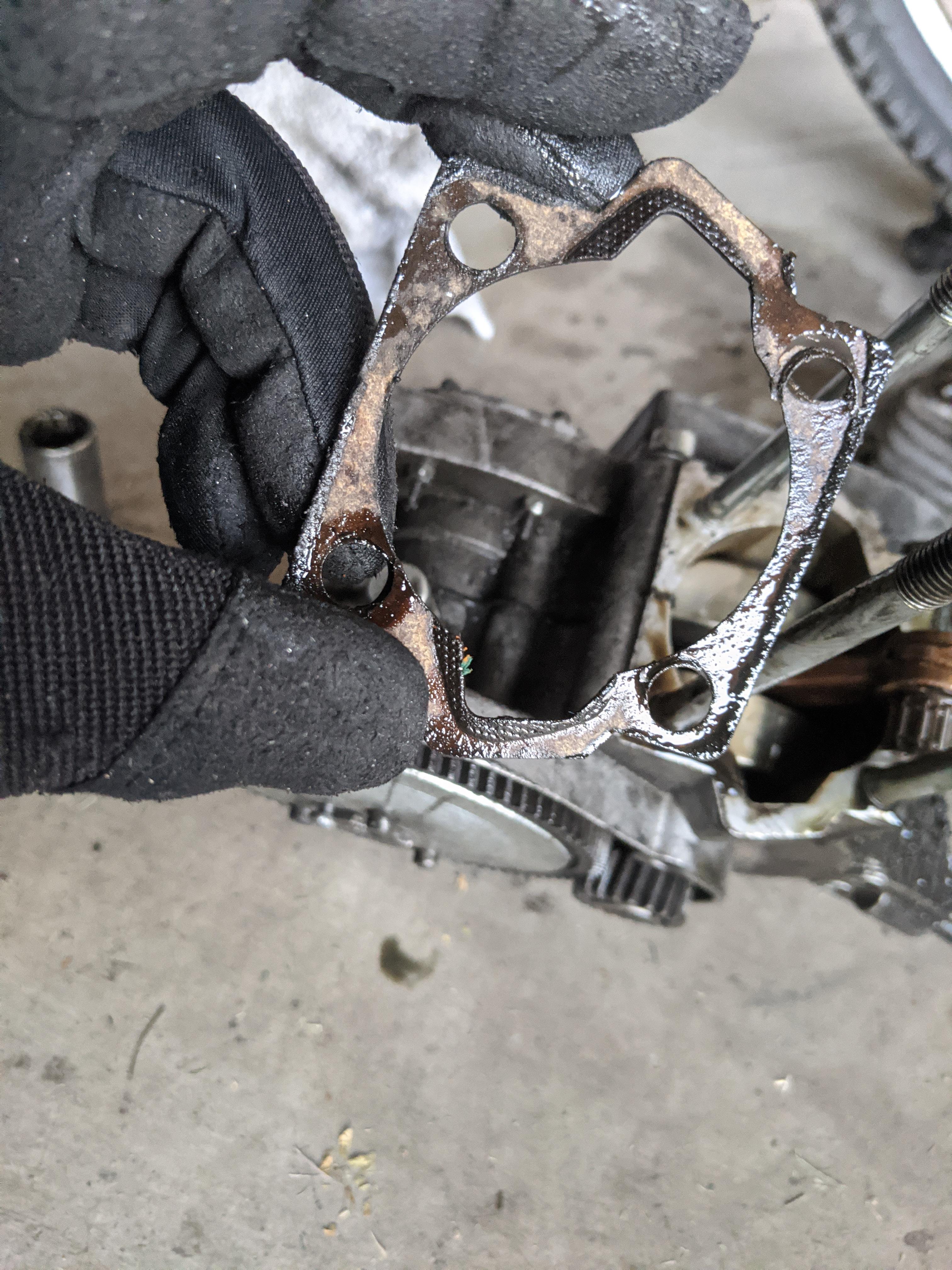 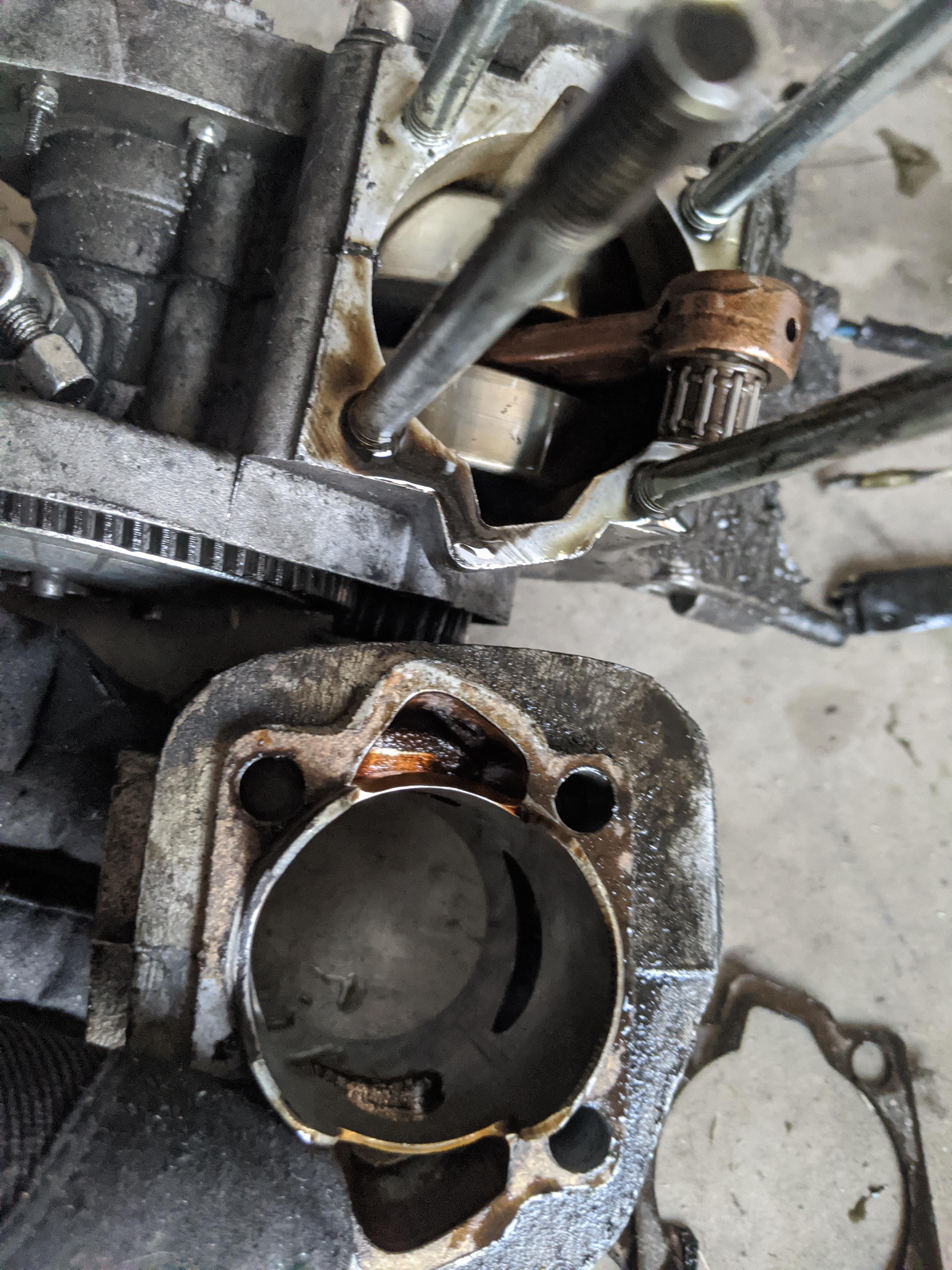 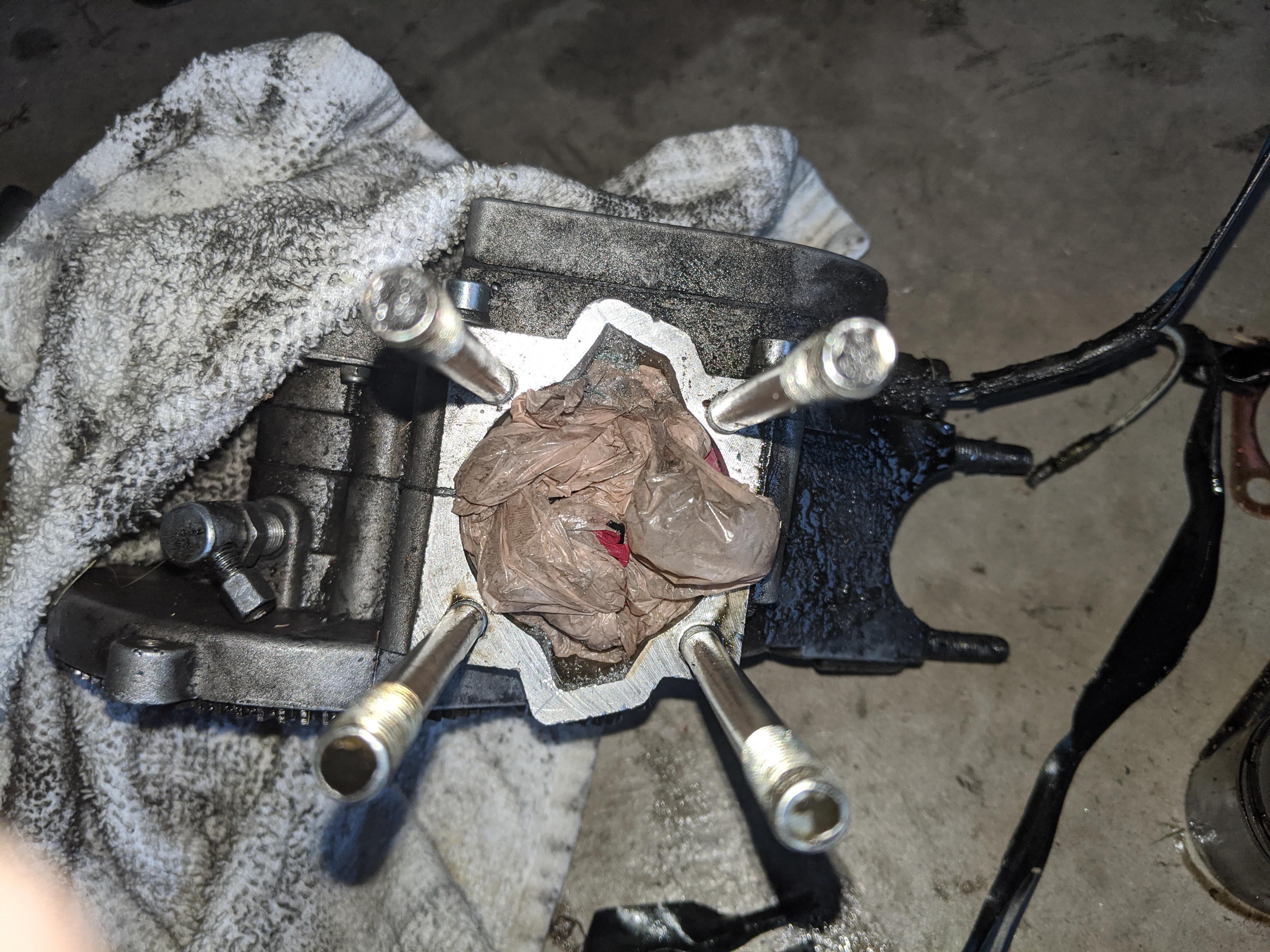 Sadly, at this point I was too covered in oil to continue taking pictures. I tried for a few mins to reshape the case transfers but wasn't able to make much progress given that my file had enough room to move maybe 3/4in back and forth. So I cleaned out any shavings and continued with reassembly.

The mzmiami windowed piston had some flashing around the window that required some light filing to remove otherwise it was simple enough to install. Despite hearing about many issues with these generic G2 reeds and not sealing well, mine sealed without a single issue using just the stock gaskets.

One minor issue I encountered is the reed's inlet tube is a fair bit smaller than the inlet of the old manifold. It's actually small enough to fully fit inside of the widebore manifold! Thankfully some gaffa tape wrapped around the inlet was able to widen it enough for my 1in heater hose to clamp down onto. I'll need to look into either buying one of the g2 plates with the bigger pipe or taking it to someone and having them put a larger pipe on it.

Once I got everything bolted back up, I took it out for a ride. Initially, it didn't want to keep running but that turned out to simply be from leaving the choke on. Once all of the air was worked out of the carb, everything got up to temperature and I turned the choke off, it ran quite nicely. 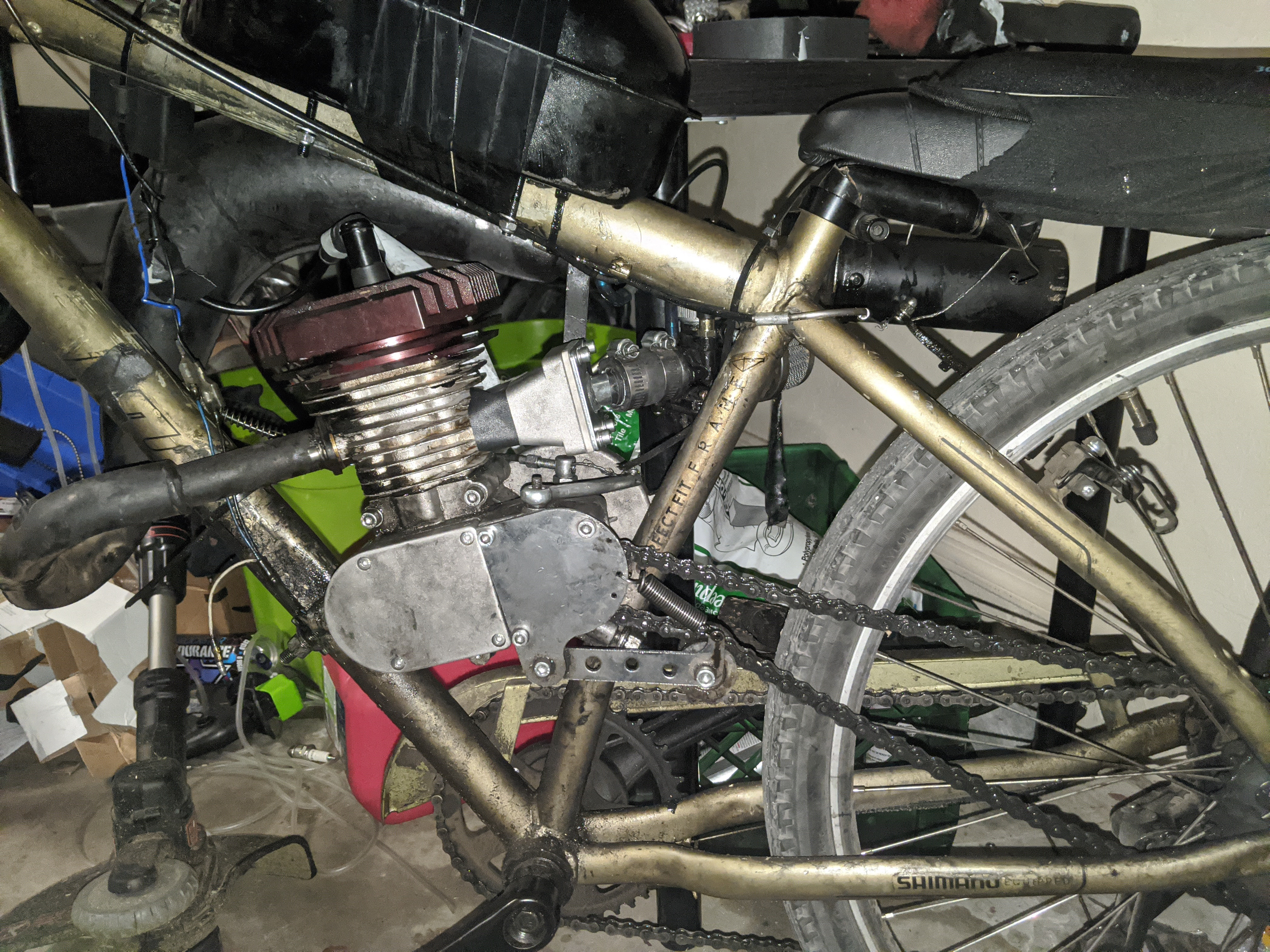 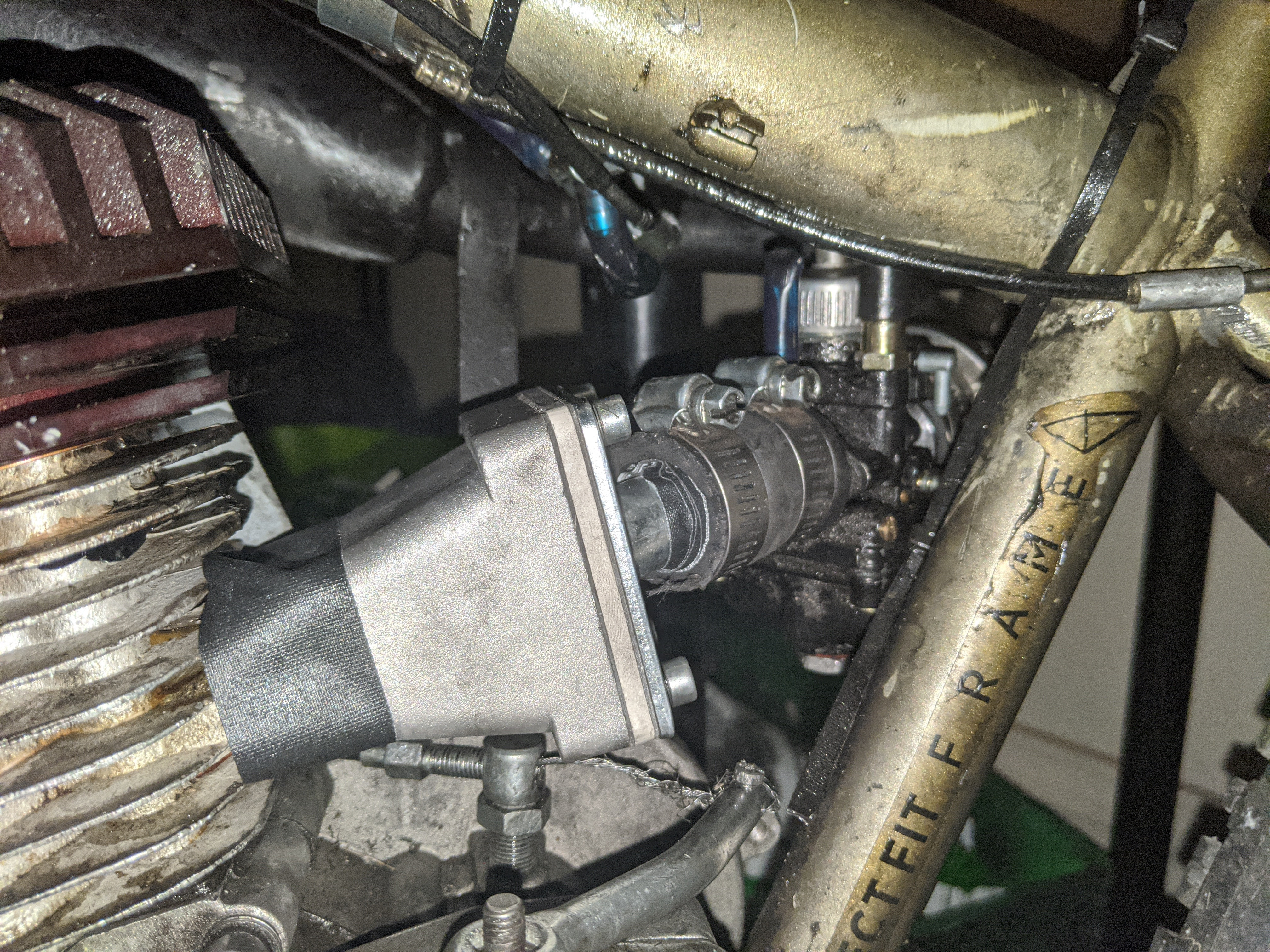 Not too sure why the head looks red in the pictures with flash, it's very black in person. Ignore the bit of tape, my 2 hour old CDI's sparkplug boot stopped holding the sparkplug...

I haven't messed with the jetting at all yet as it was getting quite late but it's looking like I should be able to leave that alone or only go up 1 jet size. I'm thinking that because I was running a bit on the rich side of things before adding the reed that I might be at the perfect spot post reed.

After riding the bike only about a mile it is hard to say if it's gained any power but the power delivery has definitely smoothed out quite a bit and the motor is behaving less "spastically" when revved without any load. Tomorrow I'll be able to figure out if it has gained or lost any power and figure out where it'll rev to now.