ever hear of the "rod run to the end of the world?" check it out: http://www.beachbarons.com/page0.html 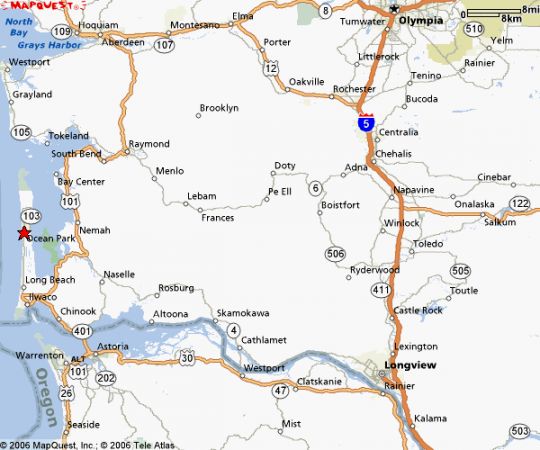 i jigged the map over, i figured you didn't need to see 20 miles of ocean.

Augie, over in travels and destinations you wrote:

bama'guy, you sure make "traveling by motor-bicycle" enticing...seems you like all the same aspects of travel & history as i do.

i grew up in st. charles mo, the actual starting point of the lewis & clark trail. now i live on cape columbia, the end of the trail.

i'd love to ship myself & bike to missouri, then come back home along the trail. would you have a look & share your thoughts about how and when one should attack such an endeavor?

anyone have any long-distance experience with a chinese engine?
Click to expand...


The cool thing about the forum is quickly finding out "real stories", and in "Cool Sites", srdavo and Dr. J. pointed out the Rif Addams "San Francisco to New York" story.

I read it, but couldn't get past page 5, where the story stops near Evanston, Wyoming. Plotting it on a map, (without doing the "details" which avoid interstates), it looks like this: 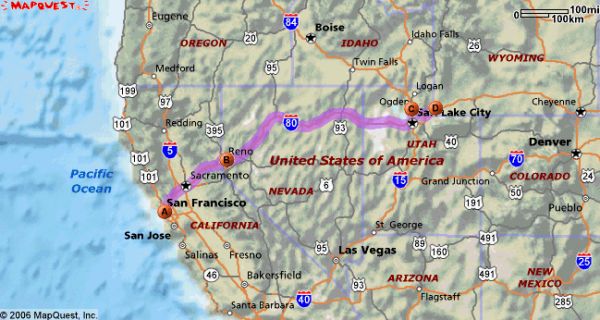 When I envision crossing from Atlantic to Pacific, my "crossing the Rockies" point was Las Vegas, New Mexico, as I read in Kit Carson biographies that this southernmost part of the "Blood Mountain Range" would be the easiest point to go "up and over", a very important consideration when contemplating a "solo" journey.

To tell the truth, when our Arizona members mentioned 120 degrees in the summer, and I recalled the many times while growing up doing the Mojave Desert leg, right about then I started thinking "Great Lakes", and looping around the source of the Mississippi River up in Minnesota.

As to duplicating Lewis and Clark, I guess the biggest preventative is "barbed wire fences". Modern roads do not follow the old wagon trails, rather they reflect the "30 miles apart" layout of towns and cities, because horses could travel 30 miles in a day, and settlers tried to stay within 15 miles of a town so they could do a round trip in one day to "market".

As to crossing the Cascades, Sierras and Rockies from your direction, I "heard" but have not verified, that some GEBE guys in Washington and Utah have been cache-ing gallons of gas in Idaho, and using moutain bikes, are able to traverse back and forth thru wilderness without seeing humans for days at a time. It WOULD take a joint effort to do such a thing, to leap frog and stash gallons of gas along the route.

This may be a "myth", but that is what you would need to do for a Lewis&Clark type trek.

One last comment about crossing the country in the "middle", as opposed to my southerly plan.

The shortest route from Sacramento to Indianapolis is Highway 36, which I rode in Northern Kansas. This road WAS A PLEASURE. When I saw regular bike riders on the Interstate shoulder in Vail, I thought "this part could be done", to get into the Salt Lake Valley.

But that was where my ideas stopped, I knew the Reno layout from my boyhood, and really thought Needles CA would a whole lot easier than Donner or Grants Pass.

Where you could cross up north in Washington probably would be more difficult than either Donner or Grants Passes. That desolate part of Eastern Oregon would be intimidating also, the towns with gas and supplies look really far apart.

When I look at where you are, and if I was thinking of doing a long ride easterly, crossing via Canada would probably look like a "pretty good" solution, because once you get over the Banff part of the adventure, it would be flatlands and mosquitos the rest of the way.......

I'm going to e-mail Rif Addams, see if he'll give us some more input about long distance traveling.
G

i realize i wouldn't be able to exactly duplicate the route, i'd get as close as i could. my mtb frame, however, would allow me to use off-road trails whenever possible. i'm already quite experienced at roughing it solo, being a camper/hiker/bicyclist most of my life, not to mention i hitchhiked/backpacked almost the entire country in the late 70's/early 80's. if i can't carry it in my ALICE pack, i can't bring it. i'd use a rear rack only, for water & extra gas. i would love to have some company for this project, tho...

i'm thinking a trip like this would require starting out in missouri at the earliest warm weather so i could hit the mountains in the height of summer.

also, my meager veteran's check may dictate i seek some limited sponsorship.

maybe i should motorize a pedal-powered keelboat, eh?

The Missouri-Montana leg looks like a breeze, after that is a mystery to me, I was a small child when our family did a Canada and back vacation, I remember a motel pool having very green water in Coure d' laine, or however you spell it...

What we need is more forum members in that zone for advise.
U

Hey augidog how 'bout this?

I've been collecting stories about long distance moto-bike rides,
I wish I could remember who this fella was, but he's from around here in WA-
Here's his weekend trip over the cascades to Cle Elum:
Maybe I should compile all these stories and print them out in a sort of book or something...

The return journey was absolutely anti-climatic. Returning to Federal Way from Cle Elum took a surprisingly short 3-and-a-half-hours, going over Snoqualmie Pass, non-stop on the freeway most of the way back with 30 lbs of tools and camping gear on a single 1/2-gallon tank of 32:1
fuel. I never had to touch the 1-liter bottle of reserve fuel in my saddlebag. I calculate this to be about 150MPG. Not bad, all factors considered.
I'm satisfied.
Last edited by a moderator: Dec 15, 2015
G

if i do get to do my trip, the one mod i vow to apply is "whatever bamabikeguy advises about tires & wheels, do it!"

THANK YOU RIF
For supplying me the opportunity to fully tell my "tire story", which sounds so similar to our unknown Washington rider.

Elsewhere in the forum topics I have emphasized building yourself a "superduper triple lined tire", especially when you think about having to fix a flat on the road. THIS story has 3 angles, or lessons or warnings, whatever you want to call it.

When I started building bikes in summer of 2005, I learned real quick that cheapy standard tubes did not hold air, and the $7 slime tubes did. As far as the claim about slime tubes "sealing" themselves, that's b.s., but I started using the slime tubes just to reduce the hassle of pumping up tires once a week.

So, last March I took my first long distance ride, to Amelia Island FL, right above Jacksonville. I started at a friends house in Vincent AL, those are his two cute kids in my collage. His son was "helping me" arrange my travel bag, that part mentioned elsewhere about "lightening my load".

To make a long story short, I handed Braxton the extra slime tube, got distracted, and so did he when he saw the football in his dad's open car trunk.

That's lesson one: when assisted by a 6 year old, always doublecheck, make sure your spare tube doesn't get placed in a car trunk when you are headed to the fridge for a third or fourth "bon voyage" Heineken, right about dusk when such oversight could happen. 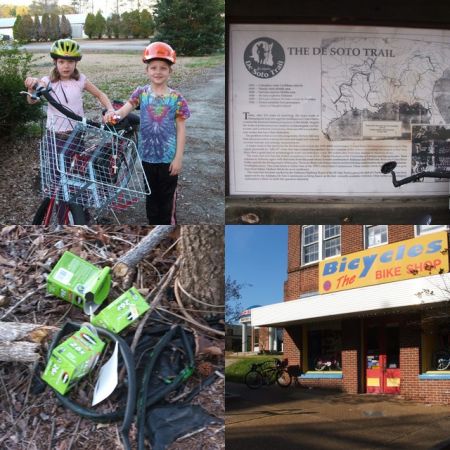 In Alabama there is a notorious stretch of "always under constuction" Highway 280, which Auburn fans b**ch about. This was my first and only time on this road, which supposedly began construction by DeSoto and may be completed when Capt. Kirk meets the Klingons. There were sections where the lanes were smooth as silk, but the shoulder was like riding on cut glass.

About 15 minutes after taking the DeSoto picture, "sherowlophfpfhp", I got a flat. I had a v-shaped notch in my tire, about the size of a dime. I pulled into a small marble countertop business, asked if I could do my repair (having heard the magic sound of an air compressor).

I ransacked ALL my carefully packed bag and backpack, THREE TIMES before realizing my spare tube was "missing". I hitchhiked to the nearest Wal Mart, bought 2 slime tubes, made the repair and left. 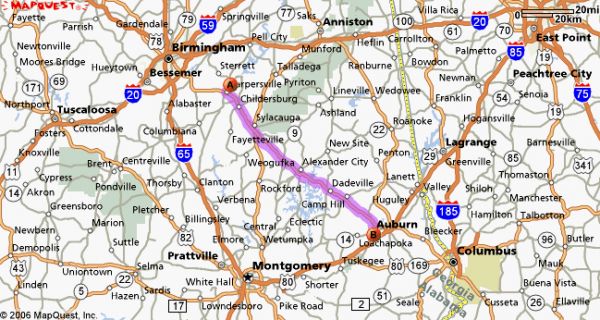 I got the second flat outside Alexander City (while fixing it 8 cop cars and 2 ambulances raced by me, right over the hill a semi fell on top of a sedan, and if I had NOT had the flat, I might of had to stay and give eyewitness testimony).

I got the THIRD flat outside Dadeville. I had been thinking I could make it to Auburn, where there was a famous bikeshop, luckily in Dadeville there was a Western Auto, where I bought every 26" slime tube (at $12 each) on the shelf.

The next morning, I arrived in Auburn an hour before the bikeshop opened, EXCELLENT service and prices (which made me mistakenly think all future bike shop owners would be cool guys- NOT).

On the Denver trip I installed one of those industrial tubes and carried another as one of my spares. NOT WORTH THE WEIGHT nor COST. The only flat I got was on the return leg, near El Dorado Arkansas, and was not caused from the outside, but from abrasion through the spokeends.

ERGO- I now double up duct tape and line the inside of the tire. Then I put in a Huffy tire liner, then a slime tube, and wrap the spoke ends inside the wheel with about 3 layers of electric tape. Combining that with ziptied spokes, and I have NOT had a problem since. 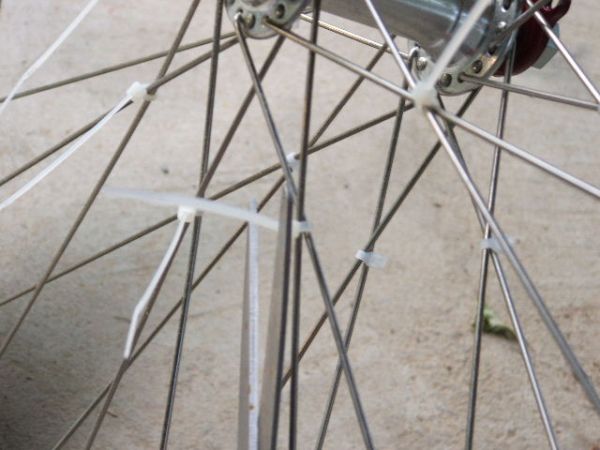 I'm not going back and counting, I'm sure there are 3 morals to the story in there somewhere. But put extra effort in your tires from the get go, one less thing to worry about............
H

zip tied spokes, eh? reminds me of the old days when people used to tie and solder spokes using bee keepers wire. basically the same thing you've done with zip ties, but you make 6 or 8, or however many you want, wraps around the spokes with the wire and then solder them.
R

God have mercy! This is a funny story, yet informative.

"After a mile, my speed had increased to 'miserable'. "

I don't understand the zipties on the spokes. What does this do to affect the little nuts where the spokes meet the wheel? Is this done to prevent the spokes from getting lose?
L

Hey Augidog, Have you made up your mind to do this trek yet?

me I would like to make a large trip around 4/08 atleast a west coast to east coast and back to AZ take about 5 weeks and just chill and I'm thinking on going guerrilla and campgrounds to keep the cost down to a minimum? how about you?