Wrench said:
I always like riding my Whizzer to car shows
Toady was the Temecula Rod Run
Where ever I park my Whizzer she becomes part of the show.

She can come ride me, I mean my bike any day.

Those California chic's are bad ass

Some Pics of one of my favorite 25 mile rides around the west side of Murrieta CA. where I live
I like to take this ride at least once a week. No stoplights and no traffic
When you can park your bike in the middle of the road you know there's not much traffic 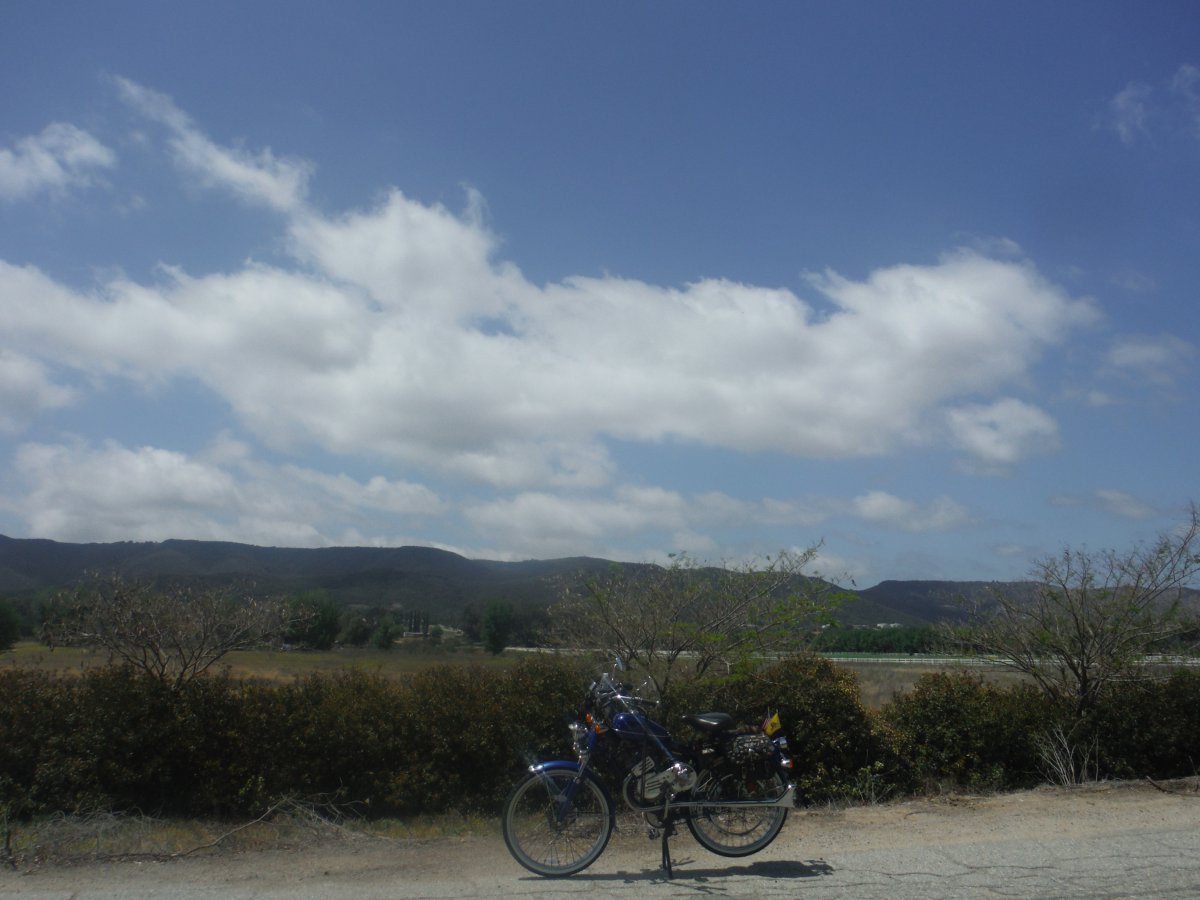 It was 80*F today. Finally the weather cooled down and I got to ride
One of my Favorite rides by where I live is 33 miles around Lake Elsinore CA.
I stopped at the lake beach to drink my iced tea and took a few pics of my bike and a pic in front of my house 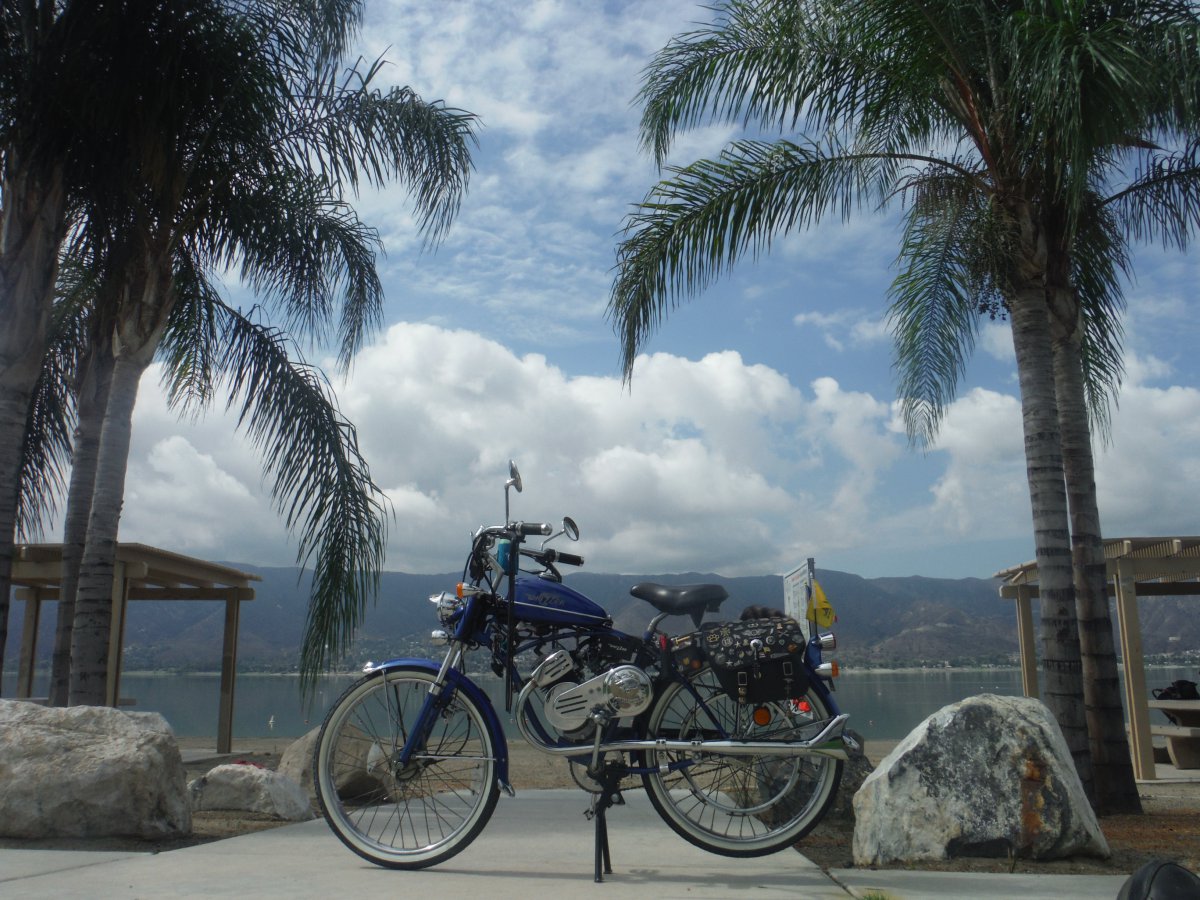 That's when the girl with the fish bowls on her feet comes around?

Car show was a blast, I won't boar ya'll with countless car pics
While at the show I talked to alot of admires about my Whizzer, 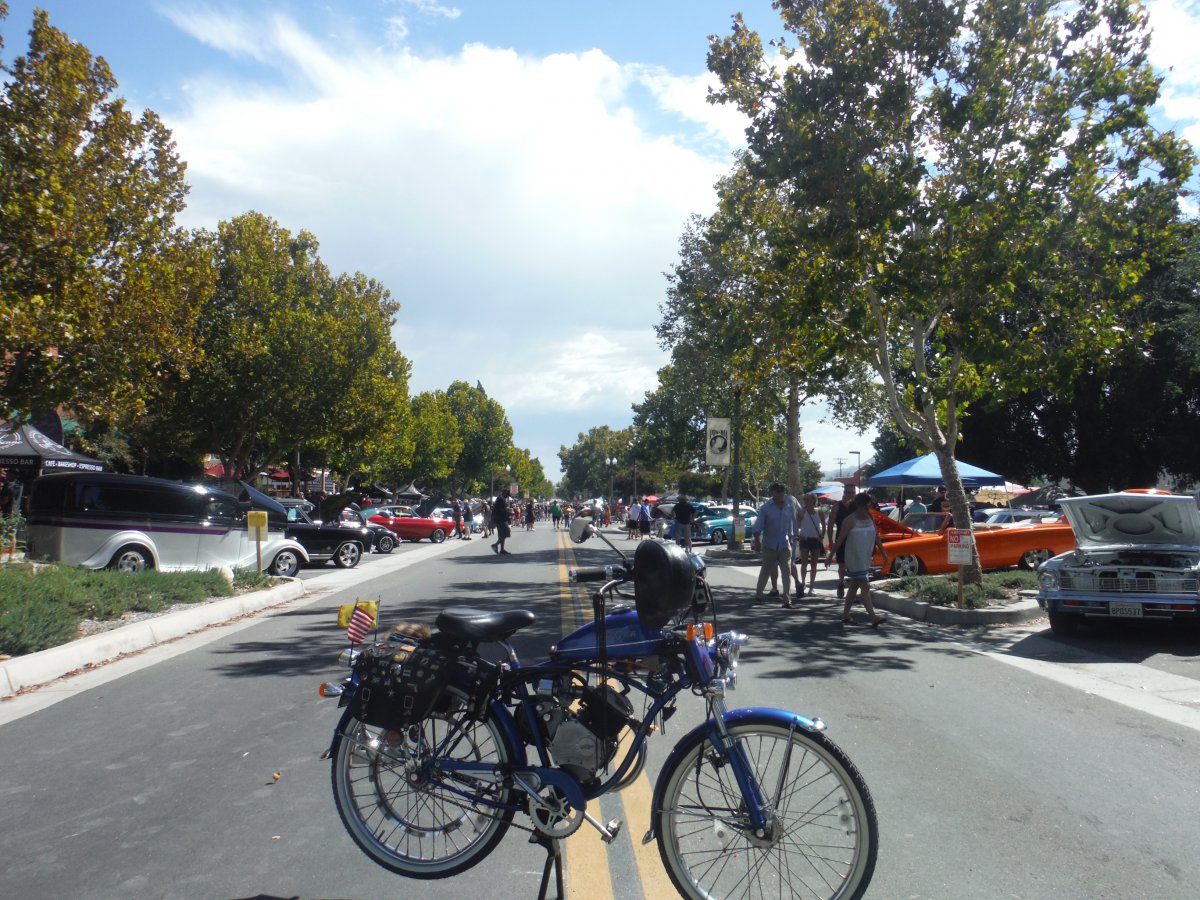 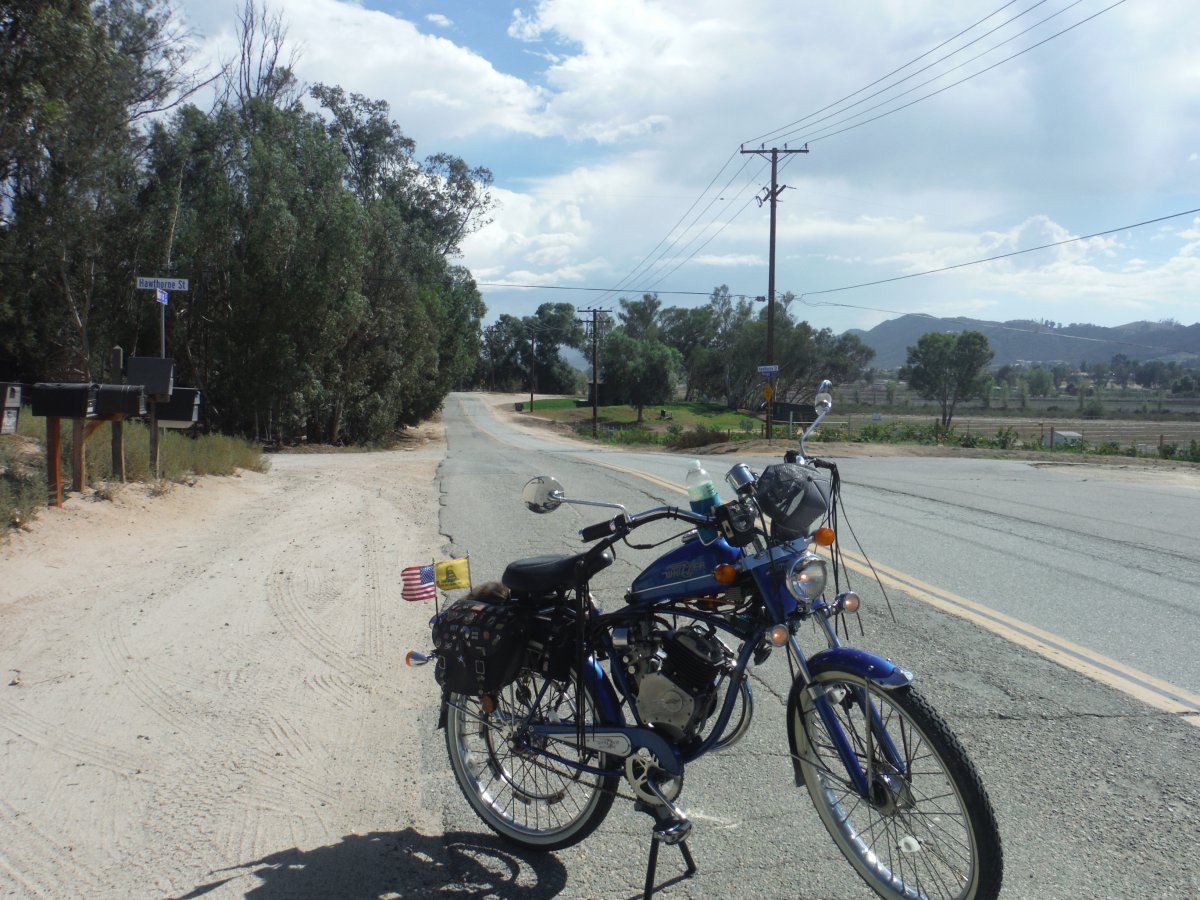 NAPLES FLORIDA: I took a my first "highway" ride on the 2004 NE5 Red Whizzer today and saw first hand the local destruction from Hurricane Ian.. I did not want to photograph the endless destruction you have all seen too often on the local news.. it is as bad as the pictures tell.

Risky Red has been on the "assembly" bench for quite some time anticipating more than a neighborhood jaunt which it has experienced a few times the past month. I bought "Risky Red" back in March this year, but only rode it "as is" few times since acquisition. You might have seen a few of those early posts. Since March, I had been busy finishing up my original 2 stroke "Risky"S Ride" and then I built a cruiser bike to sell before diving into this repop Whizzer and the yet to come vintage 48 Schwinn "j" engine I acquired about the same time. After selling the cruiser finally in September, started working on the NE5. With much help from the forum "whizzer" expert Wrench, I made several of his important mods. From his CAOS ( crankcase Air Oil Separator) to the best way to secure your exhaust system, I made some great improvements before firing it up again. Of course, I advanced the cam 1 tooth, and machined a custom phoeonolic carb insulator (like the aluminum one that every one uses but insulated to the max).

Today's ride was to say the least, an eye opener and a milestone with Risky Red. I negotiated traffic with ease thanks to the addition of an auto Clutch. without a doubt, the Auto clutch makes riding the repop Whizzer a pleasure. Especially for me as I can not stop the bike with both feet on the ground.

Now that I know how well the bike performs, I am ready to send the engine off to Quenton with my Ralph Westman Jug to take it to the final level of reliability for riding it to 40,000 miles as Wrench as done.

The ride pictures from today show that there is more sand than asphalt one block to the beach. We will rebuild.

CA isn't all bad. Beautiful state and great memories. My wife hated it there. Just so expensive for housing.

It was that time of year again for my Gal and her friends to go Bird Watching out by Salton Sea Ca.
I take my Whizzer and go riding on those seemingly endless desert roads,
I managed to clock about 250 miles in the 7 days we were there.
More pics of Endless Desert Roads 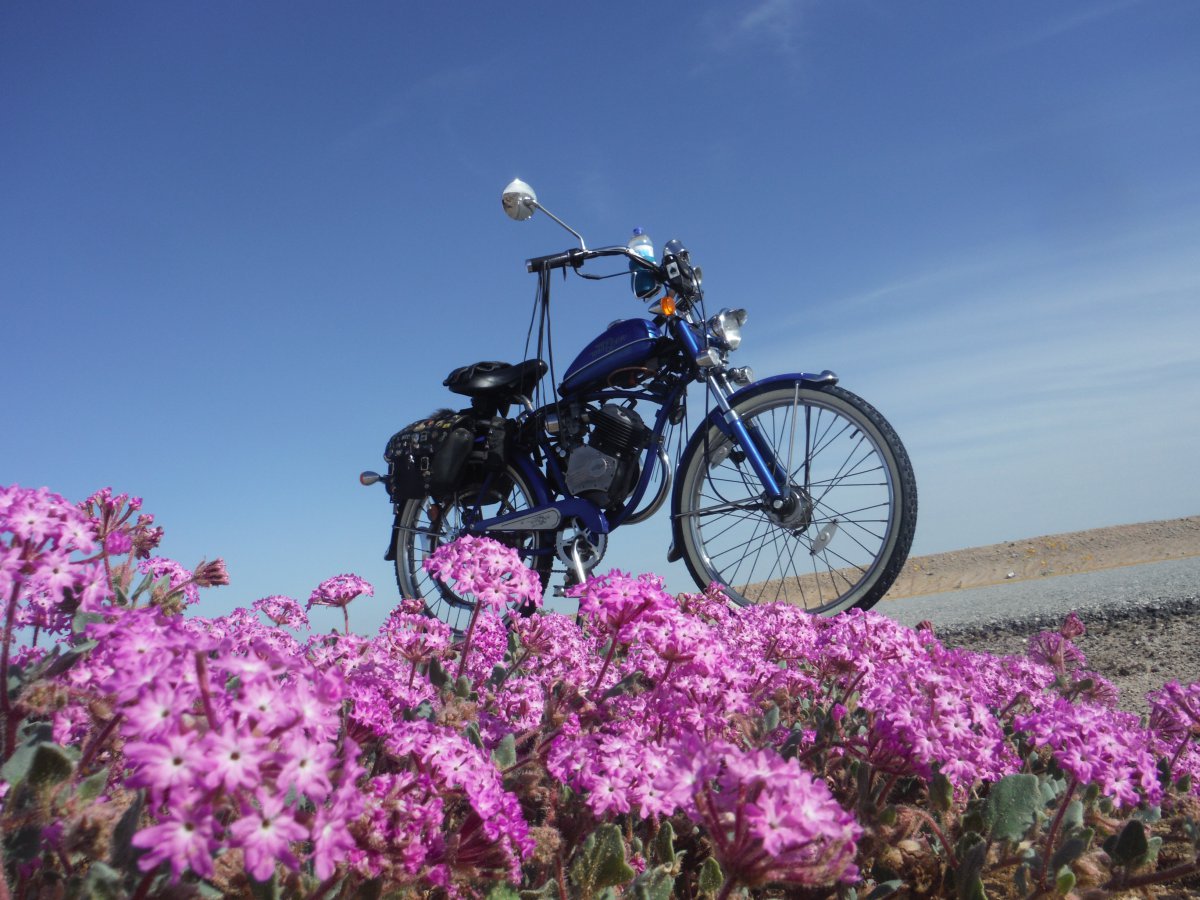 We stay at the Sunbeam Lake RV park next to El Centro Naval air base, It's the winter home of the Blue Angels
The Blue Angels practice all their tricks which we watch from our RV site.

Moving my BBS02 to fatbike
2

H
New member to the forum