Will these bikes work?

My local search for a bike to plop my 80cc engine in is coming up dry (or ultra-expensive for not so ultra-cool bikes). So I've been searching the 'net for cruiser-type bikes.

I found this site: beachbikes.net

Some pretty rad bikes there! Steel-framed and new and lovely .. 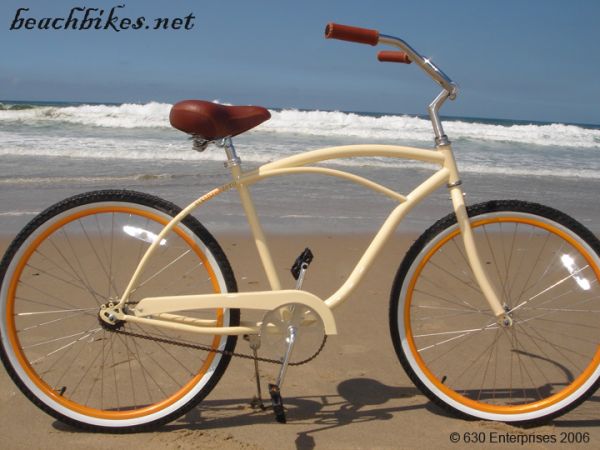 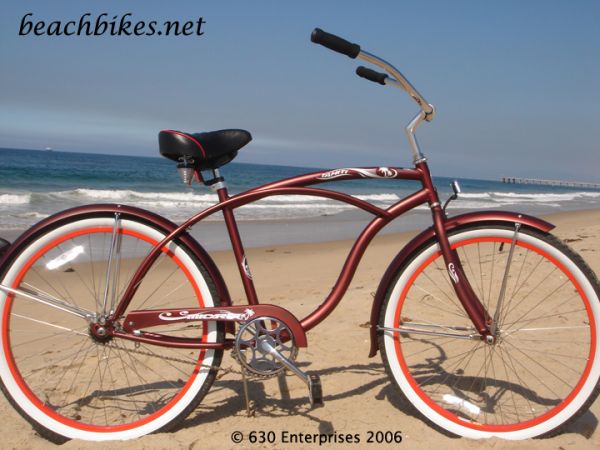 These are my favorites.

But the stats list all the frames at 19". Is it even possible to wiggle an engine in there?

.. er. And beyond that, do ya'll know anything about this company--especially you folks in CA (that's where they're located, I think)? Is it worth it? :???:

I do believe you will be ok
they look like average size cruisers
do you know the wheel size?
if 26 for sure
if 24 its tighter
N

looks good to me!
C

Nash,
my bike is a ROLAND CRUSER they are a well built economical bike ask your local bike shop about them these bikes you showed us are great looking and will work great.
If you get the one with the fender you will have to cut the rear fender and re enforce the mounting bracket (an L bracket works great ) a little toutch up paint and it will look good and be strong.
The one with out the fenders you will want to put a school boy rack on it to prevernt the tell tail skunk tail when you run through water or mud.
You might have to shave a lottle off the mounting bracket (dremel the sharp edge) to make it fit better also a thin rubber gasket on the mounting bracket will help with the vibration.
The seat on the red one looks comfee but then again I went on a 80 mile run last weekend and my tail is a little tender right now
Cookie
N

Cookie said:
Nash,
my bike is a ROLAND CRUSER they are a well built economical bike ask your local bike shop about them these bikes you showed us are great looking and will work great.
Click to expand...

I need to find a reliable bike shop around here.
I have friends with a lot of bike knowledge that I can usually go to with my woes--but as far as the professionals at the shops go .. they tend to be somewhat, er, elitist and unpleasant when a twenty-something with holes in her jeans walks in with questions and problems that don't relate to the purchase of a $1200 racing bike.


Cookie said:
If you get the one with the fender you will have to cut the rear fender and re enforce the mounting bracket (an L bracket works great ) a little toutch up paint and it will look good and be strong.
The one with out the fenders you will want to put a school boy rack on it to prevernt the tell tail skunk tail when you run through water or mud.
Click to expand...

I'm leaning toward the yellow-ish one without the fenders, figuring that the less crud it has on it to begin with, the less crud I'll have to remove and/or modify.
I like the fenders--but I can wait on them for now.

Hahah--skunk stripe! I want a rack anyway (and a basket! ) so I can cart things around.

Thanks for all your input, guys!

Nashe, I use Sun, about $225 plus modifications, but started with Avalons from Wal Mart (now being boycotted by me) for $100.

However, Birmingham (60 miles south) has a franchise sporting goods place called Academy, and I keep noticing a cruiser in there for $69, and it looks similar, except no flashy lemon colors.

Have you checked Craigslist in a few cities? I am always seeing potential bikes with fat tires on there. $5 in Rustoleum Yellow paint and you would have something similar.

Whatever you choose, we are interested in helping you get it eventually in the bike of the month competition.....
N

(I think this may be turning into a kind of unhealthy obsession; this board was the last thing I checked before going to bed and the first thing I checked when I woke up. You people and your motored-bikes are addictive! )

I am in the Wal-mart boycott category, so their bikes are out--all though I did have it in me to check their website and spied some painfully sweet deals. As always .. too bad they gotta' be so darn EVIL.

We have Sports Authority (probably similar, if not the same company as Academy) here that sells some sort of Schwinn cruiser for 70 or 80 bones, but I'm just not a fan of the bike. :???:

I'm lurking on the STL Craigslist. But most of the gems that have turned up on there are in need of several parts.

And while restoring a rust-bucket and finding its missing pieces scattered hither and yon (all before I struggle to get my first motor mounted and running) sounds fun, I asked some of my bike-buff friends about costs .. and when the numbers all added up, restoring the ramshackle old cruisers that people have in their garages around here is gonna' be way more expensive in the end that ordering one of those new cruisers I showed ya' up there.

Imma' keep my eyes open for deals, though. Even if I end up ordering a beachbikes.net cruiser, I'll still pick up any old cruiser I find on Craigslist as a future project bike. It can hang out with my Frickin' Huge Bike (that I fall over when I try to ride) until I get to it.

It's unfortunate that St. Louis isn't as much as a bike city as some of y'alls. In other states, people seem to have old cruisers coming outta' their ears. But here they are few and far between and expennnsive.

Anyway .. I ramble. Expect me to womp y'all in the bike of the month competition! Kidding.

$190 is pretty close to the Suns, PLUS you get that "working relationship/buying local" feeling by maybe finding a shop....

I have stopped at nearly 20 bikeshops now, all but 3 (THREE) were jerks.

J & B Importers is the big big bicycle wholesaler, offices/warehouses all over.....

Heres a trick you could use to find a cool shop.

Call your regional J & B, tell them "yada yada Tony at the Birmingham warehouse yada yada" and how you MIGHT start marketing them (ka - ching ). Please refer you to some nice bike shop with good tunes in the background.

For the extra few bucks, you get a pit crew, use of their bikerepair stand.

Then again, you will get more support and help here anyway, screw that advise... :???:
N

Ooh--that is a pretty nice cruiser. I may have to try that advice anyway, if only for the heck of it.

L
New here and to motorized bikes, so help please if you can!!!
2